Ohh, my sweet Lucas. Happy 7 months to you! 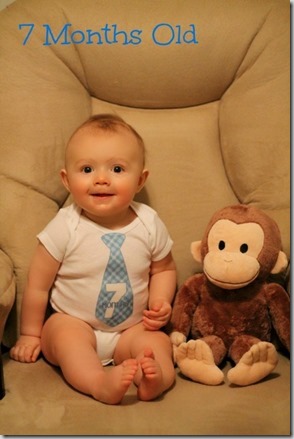 As the months fly by, Lucas’s curiosity continues to grow and grow. Not only is this little boy almost always on the move, but he’s constantly aware of his surroundings and always wants to know what is going on. Because of his constant desire to be Mr. Nosey Pants, I’ve come to terms with the fact that my sweet boy is just not a cuddler. Gahh! I’m not giving up hope though…maybe someday. Maybe…? 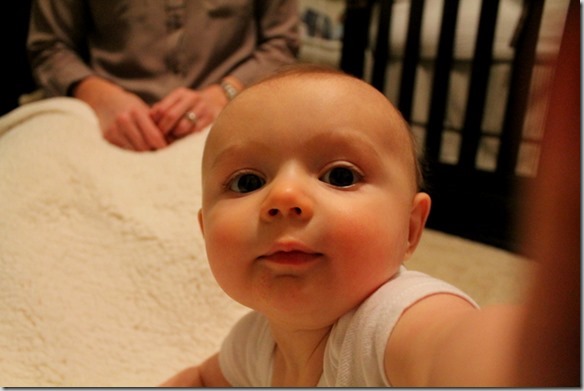 Weight & Height: We actually haven’t checked either of these since his 6 month appointment, but I’d guesstimate him to easily be over 18 pounds at this point. He’s also obviously growing longer because we’ve had to move the things on his jumper up another notch again!

Eating: Lucas loves to eat. Simple as that. Pretty much any time of day, and anything you offer him…he’s all about the food. We’ve started to stretch his bottle/nursing times to about every 4 hours and he’s now eating 3 meals a day(!) with a schedule that looks like this (give or take about 30-40 minutes):

As you can see, this past month we had to start to introduce/supplement with formula because I just couldn’t keep up with his demands. The biggest challenge was with his last feeding of the day. He was becoming so distracted (and impatient) that I couldn’t get him to stay interested in nursing. Now that we do the bottle though, he guzzles the whole thing down in about 5 minutes no problem. Little chunkamonk! 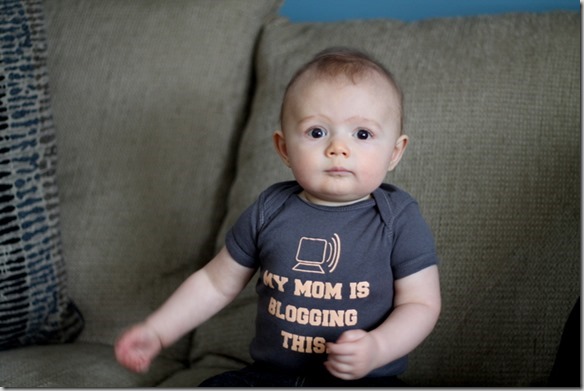 We introduced only a couple new foods this month and we’ve finally come across one that he just is not a fan of…pumpkin. Go figure?! I’ve tried it plain and with fruit mixed in and he just wasn’t havin’ it. So here’s what he’s had to date (foods with a * are new this month):

I have a couple of new ones on the list to try this month, so we’ll see how they go!

Sleeping (naps): Things have been going so well in this department, and I finally feel like we’re really in somewhat of a consistent routine/schedule. About a week and a half ago, Lucas wound up dropping his last nap of the day and so far we’ve had no problems. So now he typically has his two naps at 9am and 1pm (give or take about 30-40 minutes depending on when he wakes up) and each one lasts about an hour and a half (sometimes 2 hours). 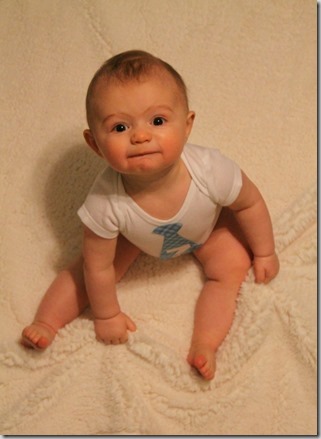 Sleeping (at night): Ughh…this has probably been one of the most challenging months of night sleep to date. Talk about a sleep regression! While Lucas has never necessarily been a rock star sleeper, he’s also never been horrible either. But this past month has really thrown us for a loop. Luckily, putting him down for bed is not a problem, but the night waking is, and we wound up losing a lot of our progress that was made last month. It started with his 6 month growth spurt and just never got much better from there. 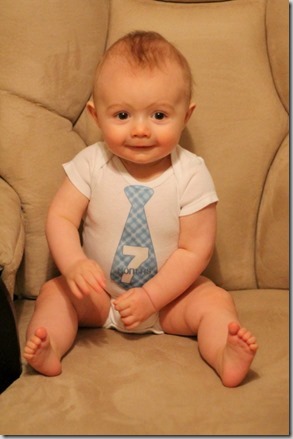 “Mom and dad get sleep? Pshhh…I don’t think so”

For the past few weeks, he typically winds up waking 2,3 and sometimes 4 times at night, and I’m not gonna lie. It’s exhausting! I’ll admit it though…I haven’t helped the situation by caving in and feeding him (and when he wakes up at 10pm{?!?} right now, I know he’s definitely not waking because he’s hungry). But sometimes it’s just easier to feed him quick and have him back down and asleep in about 10-15 minutes, as opposed to hearing him whine/cry for 30 minutes. We have some work ahead of ourselves, but I try to just keep reminding myself…it’s just a phase (aren’t they all?!?) and it, too, shall pass. In the meantime, I’ll just be crazy tired. 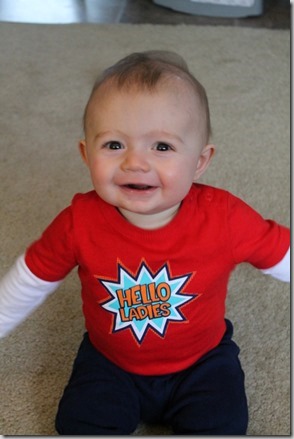 Clothing: He can still wear most of his 6 month clothes but depending on the brand, some of them are getting a bit sung (and some of his long sleeve onesies are looking a bit more like 3/4 sleeves). He can wear most 9 month clothes okay but I’m trying to get as much wear as I can out of the 6 month outfits before I have to pack ‘em away (tear). He’s also just about out of size 2 diapers (we’re just trying to finish our last pack!) and wears size 3’s at night.

New this month: This month has been so fun in terms of watching his little personality continue to grow! In just the past week or so, he’s developed this hilarious fake laugh/cackle and every time he does it, I swear he gets even more of a kick out of himself.

He’s also started using a sippy cup, which he does okay with. Half the time, he’ll just decide to nibble on the bottom of the cup though.

We don’t quite have a full out crawler on our hands yet, but he will rock back and forth on his hands and knees all the live long day. He does “scoot” backwards, but then gets frustrated that he’s getting farther away from what he’s going after.

But one of his absolute favorite things to do now, since he figured out he could a couple of weeks ago, is to pull himself up to a standing position.

He will do this over, and over, and over, and…well, pretty much for as long as you’ll keep offering your hands for him to do it. He looooooves it, and once he’s up, he gets crazy excited and wants to reach for all the new things that are in his reach. 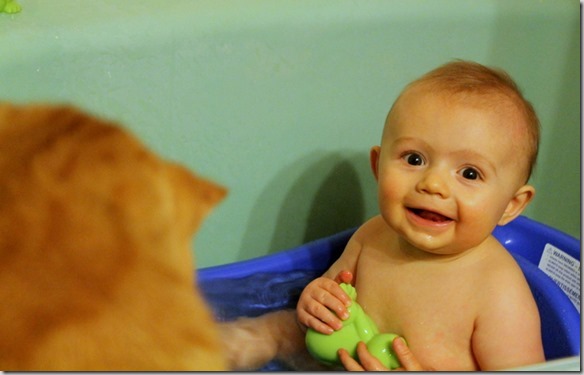 I’m just so excited to continue to watch him grow and see the little boy he’s becoming. It’s just the most amazing feeling to see him develop and grow right before our eyes and think, wow, he’s ours. We really made that. 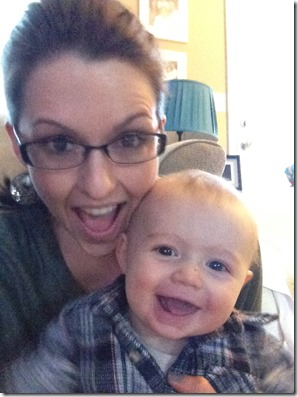 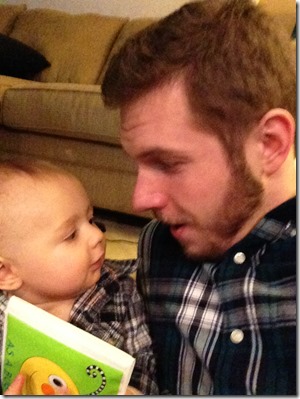