Toddler meal ideas can be tough. Especially when they don’t want to eat anything. But somewhere over the last two weeks or so, my child who seemingly could exist on air some days is finally starting to eat again. And even try new things.

While I have no doubt that this is likely also a phase until the next time he decides he wants to stop eating all the things, I’m currently relishing in the fact that meal times have become SO much easier.

Weekday breakfasts can vary for Lucas (depending on if we’re running late in the morning…which is almost always a yes). If we do have time, I’ll often try to go through a rotation of either cooking him an egg with some peanut butter toast or re-heating some pre-cooked pancakes (I’ve been making some extra on the weekends lately). 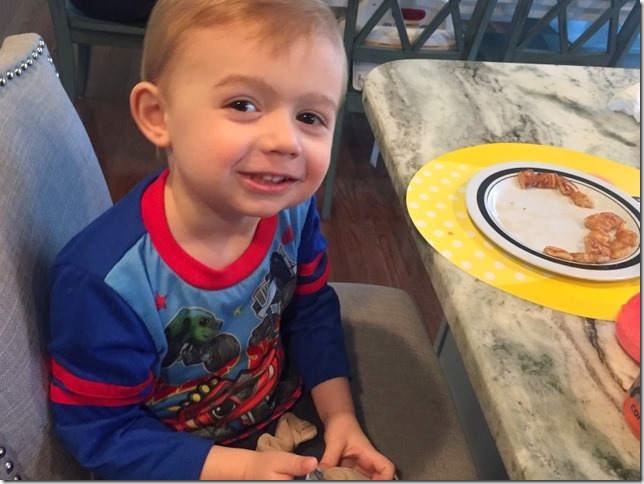 If/when we don’t have time for one of those, I try to at least make sure to get him to eat either a fruit, protein, or usually some kind of bar (because it’s a sure bet he’ll eat them) before we leave the house, and then I’ll pack the rest so he can finish up later at the babysitter’s house. Some days, we also do peanut butter and banana smoothies, or also just some dry cereal, and that works along with his cup of milk. 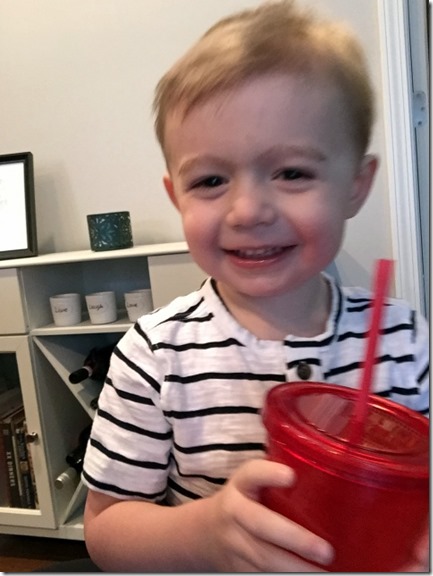 For dinner, we were basically on a rotation of hot dogs, mac and cheese, peas, carrots, the occasional green bean, scoops of peanut butter, and sometimes breakfast for dinner. I’m not kidding…it was rough going for a while there. 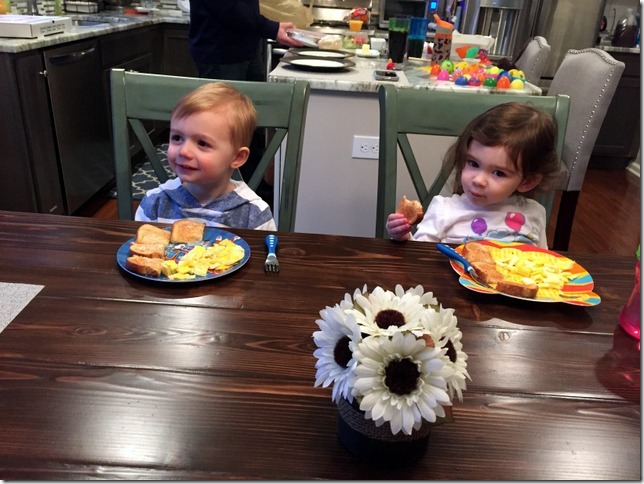 And I’m not saying that he’s suddenly the best eater on the planet, by any means. Oh no. He’s still quite a snacker. And he totally loves his sweets… 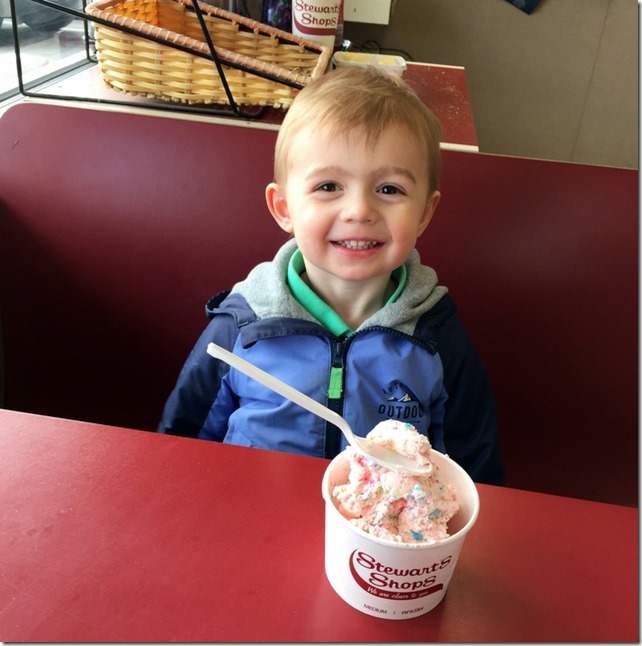 I’m pretty sure I know who to blame for that one.

For lunch, when we’re home, things are usually different and if I have time I’ll have some fun putting together some lunch plates for him. 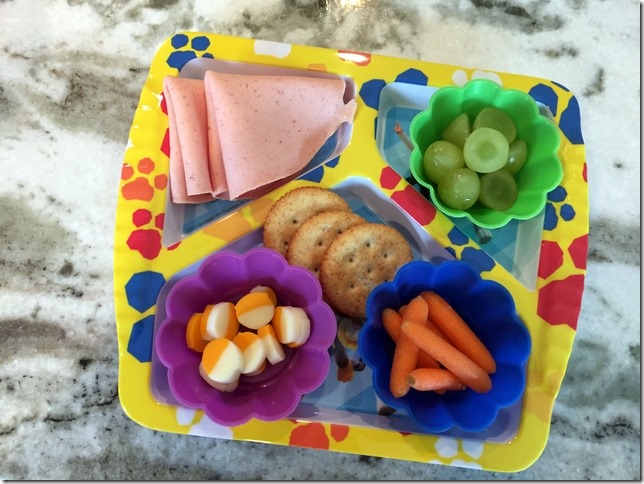 More often than not though, he winds up not eating a whole lot for lunch on the days he goes to daycare, which usually ends up with him not only being grumpy by the time I get him, but also wanting to eat more when we get home and inevitably ruining his dinner. It’s a vicious cycle!

I know I mentioned to you guys that I recently purchased him this awesome lunch/Bentgo box. 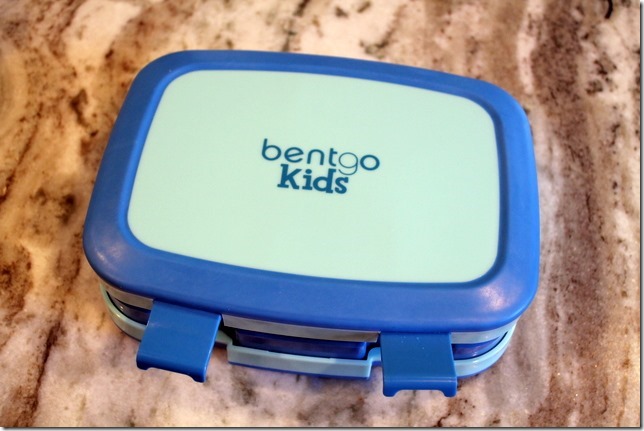 Even though it’s only been about a week of using it, it seems to be helping quite a bit! 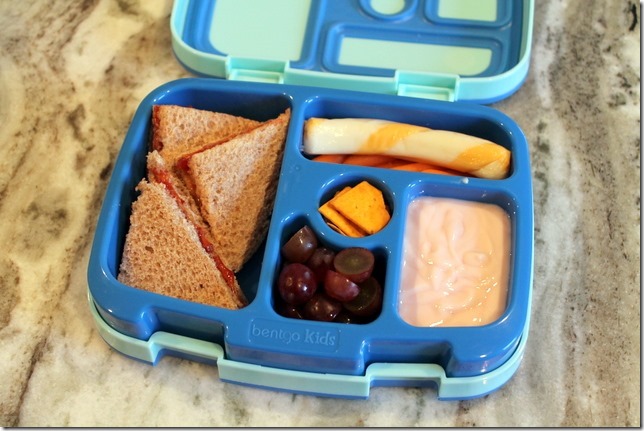 Lunches lately will usually include yogurt, a fruit, a veggie (baby carrots lately…he’s loving them, so I’ll ride that train as long as it lasts), and then a mix of either PB&J, bologna and cheese, mac & cheese, and crackers. 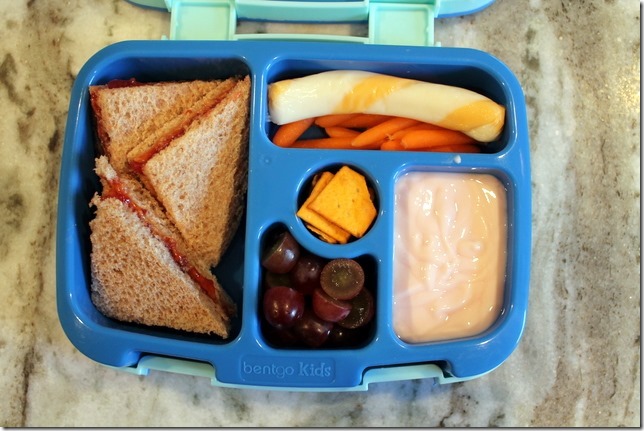 And speaking of crackers, I’ve got tot tell you about the new line of organic Smart Crackers from Bitsy’s Brainfood. We are LOVING them!! 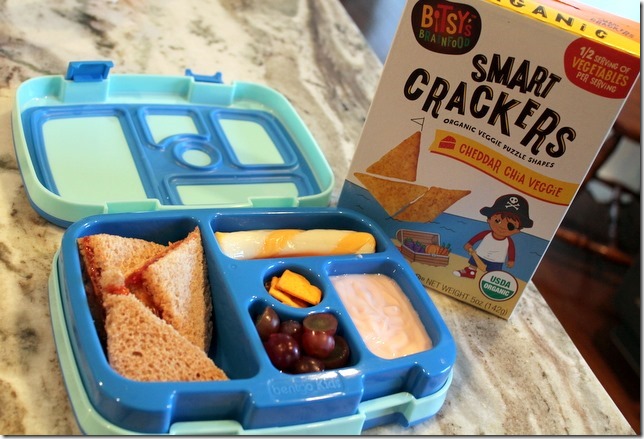 I’ve been thrilled to partner with Bitsy’s this past year, and truly get excited to share their story and their products with you guys because I just think they’re great. 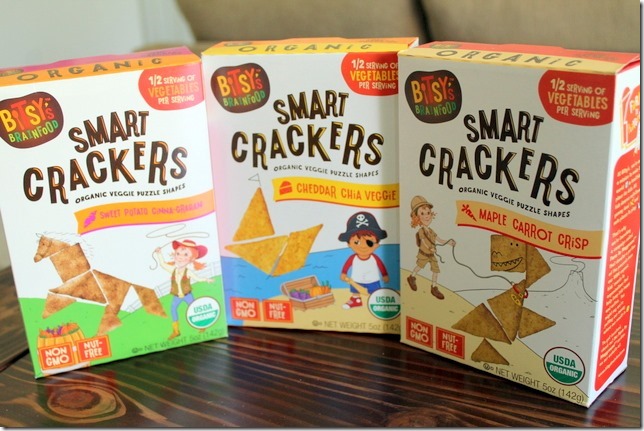 Now, Bitsy’s Brainfood has launched their Organic Smart Crackers, which come in three flavors: Cheddar Chia Veggie, Maple Carrot Crisp, and Sweet Potato Cinna-Graham. They’re made with a half serving of organic veggies per serving, and they contain an excellent source of Vitamins A, B6, B12, D, and Folic Acid. They’re also peanut-free and tree nut-free facility, making them school safe (I know there are so many schools out there now that are nut-free!). 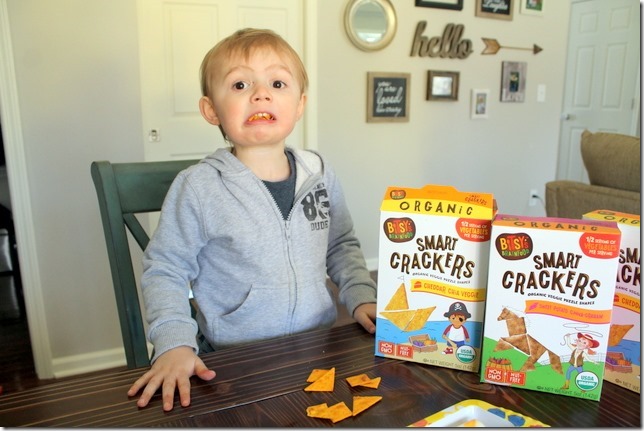 Clearly, Lucas is excited about them. And we both love how they’re baked in fun Tangram shapes (which teach logic, math and spatial reasoning – gotta love when food and education align, right?!). He was obsessed with pointing out all of the triangles, and then we had some fun making squares out of the triangles when put together. 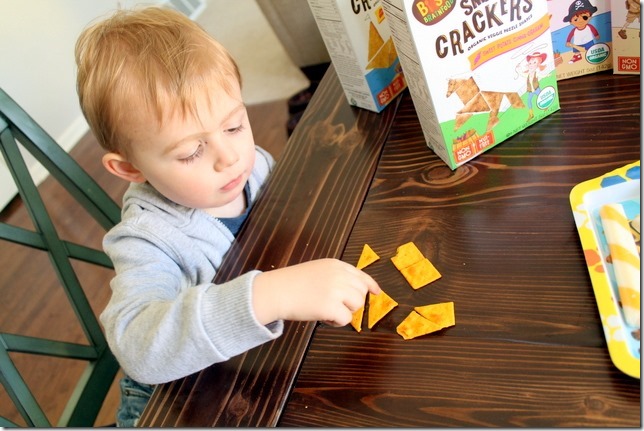 And even more exciting for Bitsy’s, they were recently handpicked as one of the 20 natural, organic and sustainable brands selected for Target’s 2016 Made to Matter collection! This program makes it easy for Target guests to find natural, organic and sustainable options, and be introduced to meaningful product innovation from purpose-driven brands.

If you head to your local Target store this week, be sure to look for the Bitsy’s Brainfood Smart Crackers and Smart Cookies, which are currently 20% OFF on the Cartwheel app!! 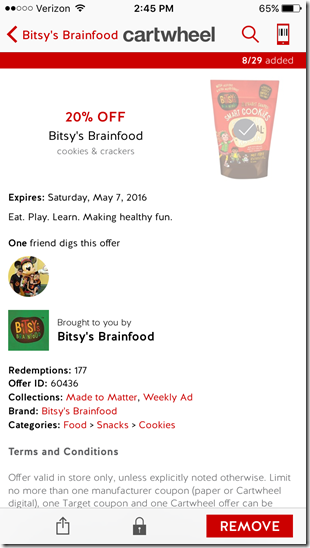 Want access to exclusive information and coupons, learn about fun campaigns, and even get samples from time to time? Be sure to join Bitsy’s Smart Cookie Community and help spread their mission of making healthy eating fun!* Just CLICK HERE!

This post is sponsored by Bitsy’s Brainfood! Thanks so much for your continued support of STSL <3