The day(s) leading up to Lucas’s arrival were really like nothing else I’d ever, ever experienced. When it came to childbirth, I really tried to go into it with little to no expectations. I’d been told by so many people that you can spend all the time in the world making a “birth plan,” but very rarely is that how things go down once the show gets started. So, speaking of the show getting started…

As you guys know, Lucas was a stubborn little guy and was having no problem hanging out in the womb for as long as possible. On Thursday, July 25th, I had another doctor’s appointment to check up on the little guy to see how he was doing. An ultrasound showed that he was still doing okay in there, but that my placenta was starting to slightly deteriorate. Because I would be 41 weeks the following day, combined with the status of my placenta, my doctor suggested a scheduled induction for the following day and Jay and I agreed.

So on Friday, July 26th, Jay and I were up by 4:45am in order to get up and get ready to be at the hospital for our 6am induction. The whole morning was really sort of surreal…the two of us were just sort of like, “ummm, are we really having a baby today?!?”

Well, as it turns out, we didn’t have a baby THAT day…

On our way to the hospital, I scarfed down a pb&j sandwich since I was told I would not be allowed to eat much of anything after I was administered the Pitocin for my induction. Once we arrived at the hospital, we were brought to our room, allowed to get settled in, and I changed into my sexy gown. 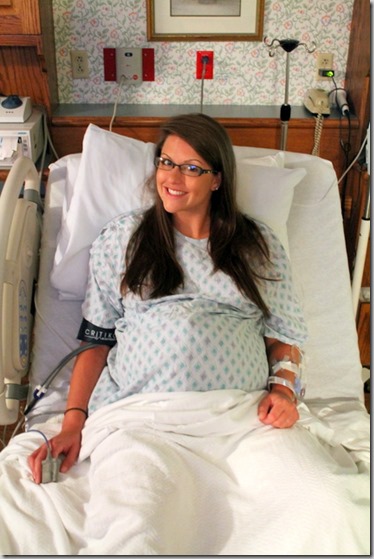 They took some vitals, hooked me up for monitoring, did an internal exam (I was still dilated 2cm) and by about 8am, I was given the Pitocin and started at a low, level 2. Although I did have to be hooked up to an IV with the Pitocin, I was still able to be up and moving which was nice.

I spent a good majority of my first few hours up and moving around, either doing labor lunges, walking, or just bouncing on the exercise ball. At this point, I was getting occasional contractions but I still wasn’t really feeling all of them. The only way I knew was if I watched the monitor I was hooked up to.

Every, oh I don’t know, 30 minutes(?) my nurse would come in to up my Pitocin slightly, and I was eventually able to start feeling some of the contractions, although they were not very strong. At about 10:30am, I was bouncing on the exercise ball while Jay, my parents, and my in-laws were all hanging out in the room. I was snacking on a push-up Italian ice when all of a sudden I said, “Uh oh…UH OH!!!”

Sure enough, my water broke…and there was NO question about it whatsoever. My doctor had told me that I had a ton of fluid so I’d definitely know when it was happening, and she was seriously not kidding. It was the weirdest sensation…fluid was literally just pouring out of me and it wouldn’t stop! The nurse came in and told me to stand up from the ball, and the fluid continued to flow. I’m pretty sure we had about 4 big towels around me on the floor trying to soak everything up. So glad I got to share that moment with everyone…

Not long after my water broke, my contractions definitely started to become more noticeable. I continued to sit/bounce on my ball for while and breathed through the contractions while Jay massaged my low back. My one nurse was just incredible and also gave me a killer foot massage, which helped take my mind off of the pain slightly.

Around 12:30pm (I think?) the contractions were getting worse and worse (thanks to my level of Pitocin continuing to be increased) so I asked my nurse if she’d check me again to see how dilated I was, and she told me I was dilated to about 6cm. Fantastic news! I had said I wanted to hold off on getting an epidural for as long as possible, but at this point, the pain was pretty awful and I figured if I was already dilated to 6cm, it would be a good time to get it.

WELL…there were only two anesthesiologists on staff that day; one was in the OR and the other had about 3-4 other patients in line waiting for him. It ended up taking him about an hour to make it to me, and let me just say that this was probably one of the worst hours of my life. At this point, my Pitocin level was up to about 20 and my contractions were coming one right on top of the other, so I had no breaks in between each.

I don’t quite remember how I got there, but I wound up hunched over my bed for a good majority of this hour, just trying to sway back and forth and breathe through each one. Jay was amazing and continued to massage my back, while my nurse let me squeeze her hands and attempted to calm me down. There were times I could help but moan and cry through certain contractions, but I tried so hard to keep calm, knowing that it would only help me in the long run.

Eventually, I heard the anesthesiologist come in to the room…FABULOUS! It was time for an epidural because I could not take it anymore. Unfortunately, my consent form appeared to be missing (?!?!) so my doctor raced out of the room and had a nurse print another one. At this point, I somehow got up and sitting on the bed with my feet over the side, hunched over. All of a sudden, I see a piece of paper in my lap and they’re telling me to sign it…I literally took the pen and scribbled some lines…good enough for them, thank goodness!

The anesthesiologist, from what I could tell, did a great job of administering the epidural. I don’t even remember feeling the needle go in, but I’m sure the endless contractions had something to do with that. He told me that I’d start to feel my feet warm up soon and that it would eventually travel up my legs and into my belly. After a super short amount of time, my world was changed. Holy freaking-moly…epidurals are an amazing, wonderful thing.

I was at the point now where I couldn’t feel anything, despite watching my monster contractions on the monitor. My nurse said that after all of those, I must have REALLY made some progress, which got me really, really excited. My doctor came in shortly after at around 2pm-ish maybe(?) to do another internal exam. As I watched her face while examining me, I started getting nervous…she did not seem to be as excited as I was.

I asked her what was up, and she turned to me and said, “Well, I think the nurse measured you wrong last time. You’re not dilated 6cm…you’re really only about 3-1/2.”

I looked at Jay, then her, and said “you’ve got to be freakin’ kidding me?!”

And then I started to cry.

This is already super long, so I’ll follow up with part 2 tomorrow!