I’ve got a new maternity Stitch Fix delivery to share with you today! 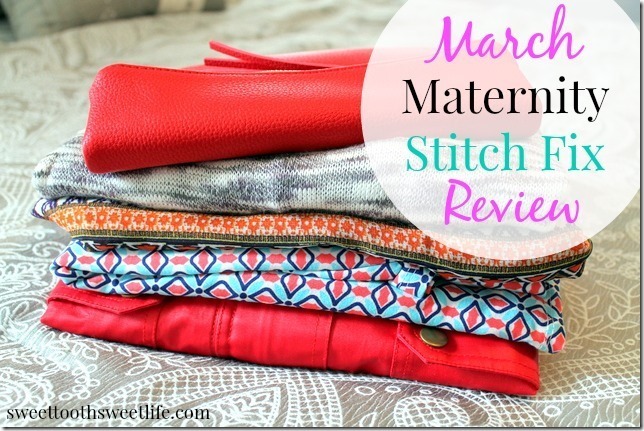 After my last maternity Stitch Fix delivery last month, I decided that it likely isn’t worth it for me to request maternity-specific items in my fixes. For one, I know I probably won’t wind up keeping them, and two, I’d much rather have some items that I might be able to get some use out of now AND for after the little man arrives.

So I requested some tops that could possibly work, a maxi skirt, a blazer with a pop of color, and make an accessory or two. I wasn’t totally specific, but for the most part, they were able to deliver what I asked for (with the exception of a blazer – my stylist said they didn’t have any in my size in stock so she substituted something in its place).

Here’s a look at what came this month! 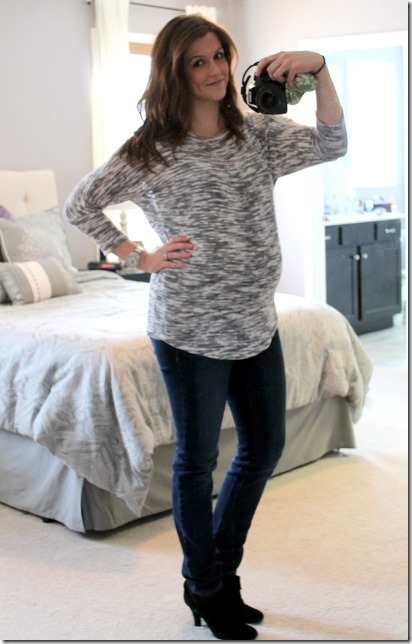 I had a feeling I’d love this shirt as soon as I peeked in my checkout cart in Stitch Fix before it even arrived (does anyone else look ahead of time then Google search for your items?!). The shirt still has a bunch of give to it and it’s not even maternity, so I’ll easily be able to wear it as a loose-fitting top postpartum. 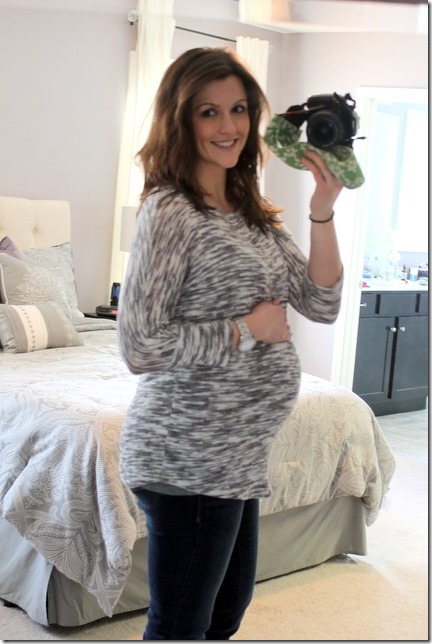 Since I’m always a fan of loose fitting tops, and I liked the colors, it was definitely a keeper. 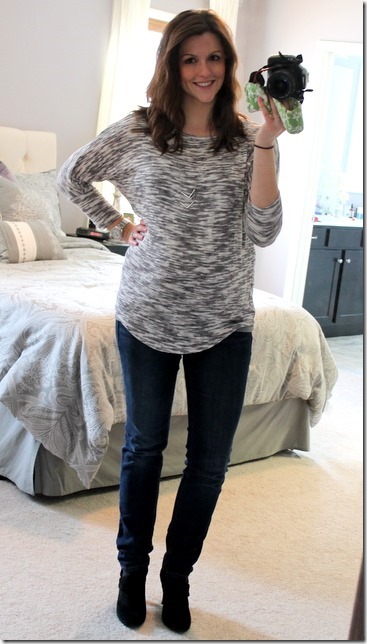 Okay, I was having like, THE hardest time photographing the majority of my pieces this time around. But this one in particular was giving me an extra challenge. So I’m apologizing from here on out for any photos that are semi-blurry and/or obviously taken in my dirty mirror that I should have cleaned better. I just gave up. ;) 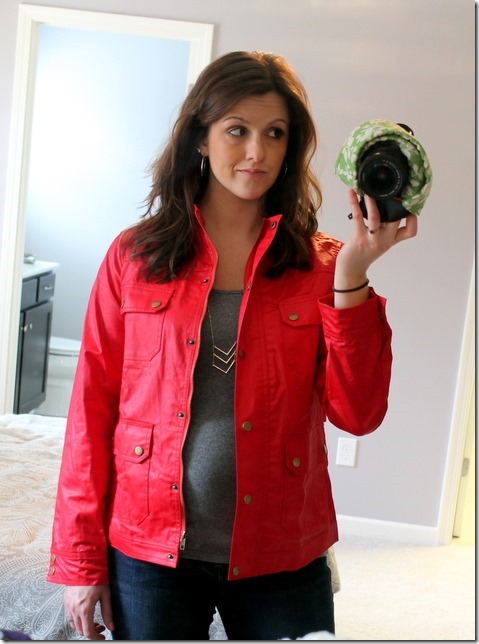 I liked the idea of this jacket because it’s always fun to have a bright pop of color in your wardrobe. But this one just wasn’t doing it for me. I didn’t really like the material (“waxed” is definitely a good word to describe it) and it was a bit snug in the shoulder area. 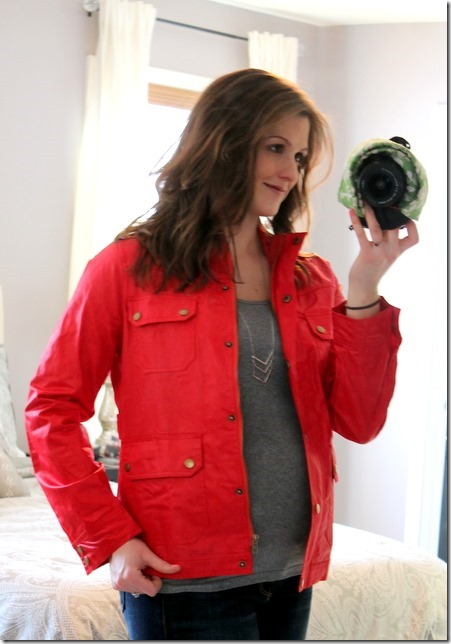 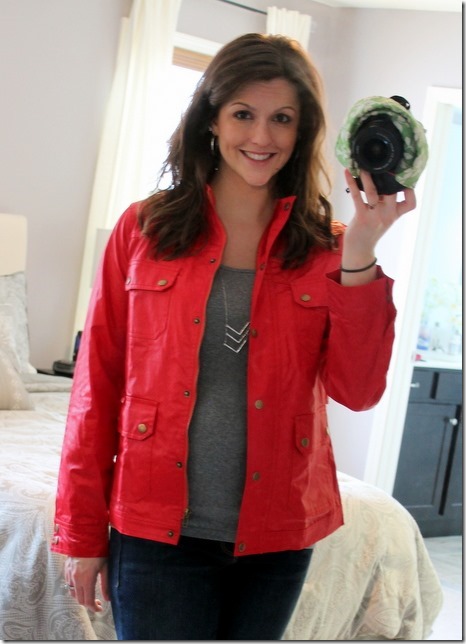 This one was a return.

Again…my camera and I were just not friends on this one and of course, the clearest shots were those where I was taking a practice shot. Go figure?! 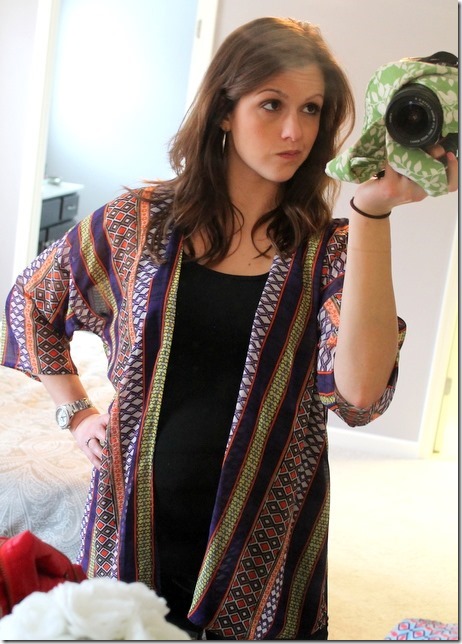 So this kimono. I loved it out of the box. I thought the patterns and colors were pretty and it really isn’t like anything else I own. 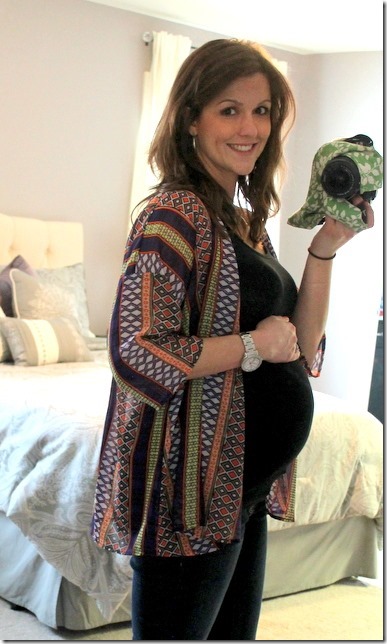 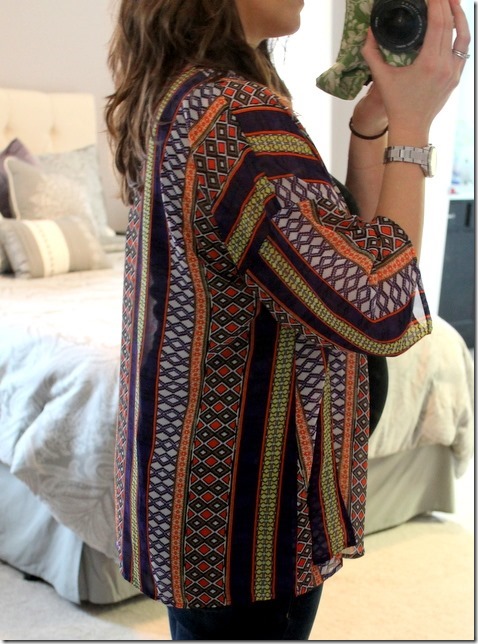 But for whatever reason, I just didn’t really like the way it hung on me. 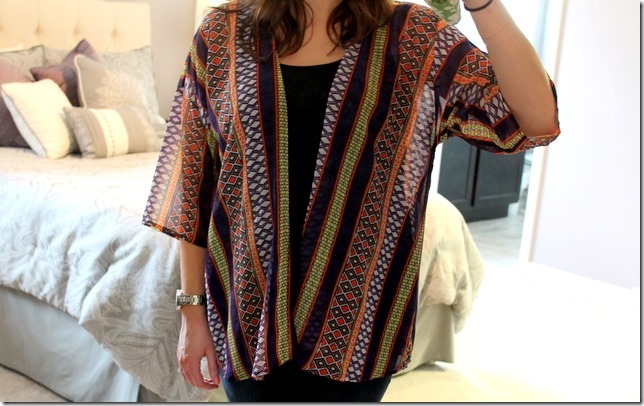 So ultimately, it was a return.

I was thrilled when I saw I had a maxi skirt coming in this fix! I mean, they’re basically a pregnant woman’s best friend. No pants = forever amazing in my book. 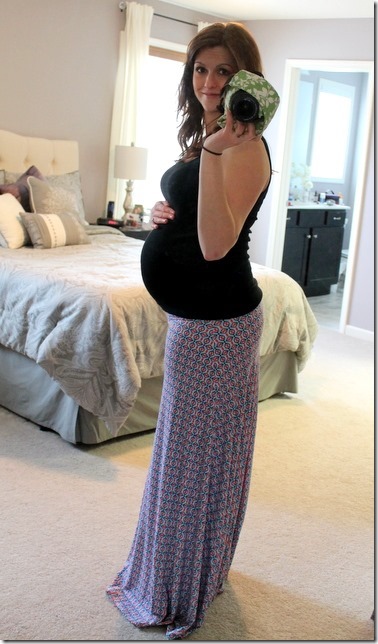 Sadly, it just wasn’t for me. For one, it was a little snug around the hips which didn’t look quite as flattering facing head-on. It was also pretty long (which NEVER happens for me…EVER), and I knew I wouldn’t have wanted to bother getting it hemmed. 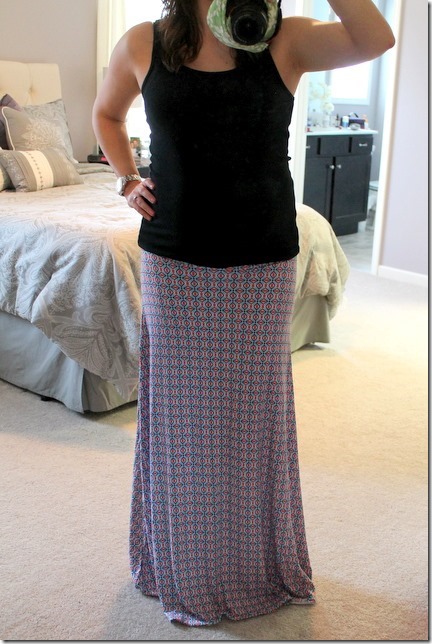 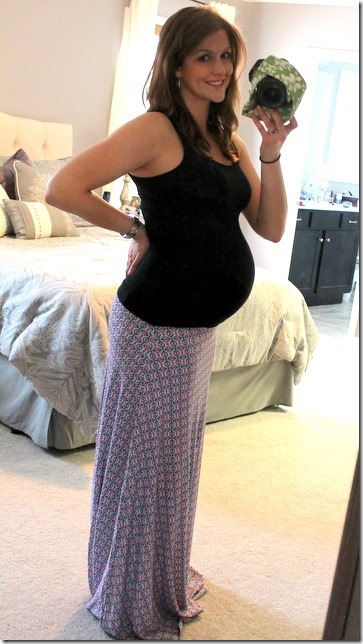 And then I also just wasn’t a huge fan of the pattern. 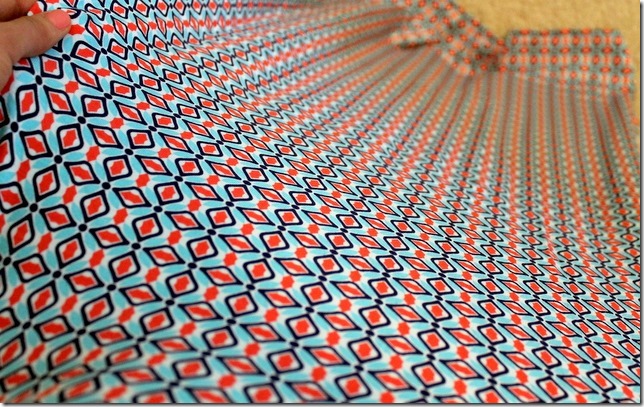 It did, however, have an amazing waistband though, so if this pattern IS your thing, I’d highly recommend it for that reason alone. It was quite comfy! Hey, maybe they have other patterns?! 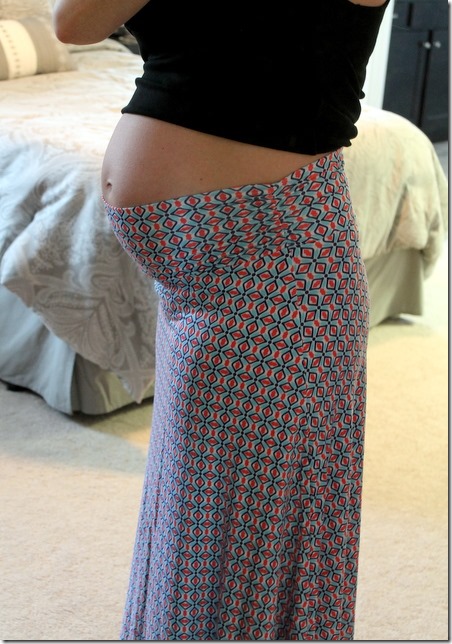 The last item in my fix. I went back and forth on this one for two days because I was so torn! 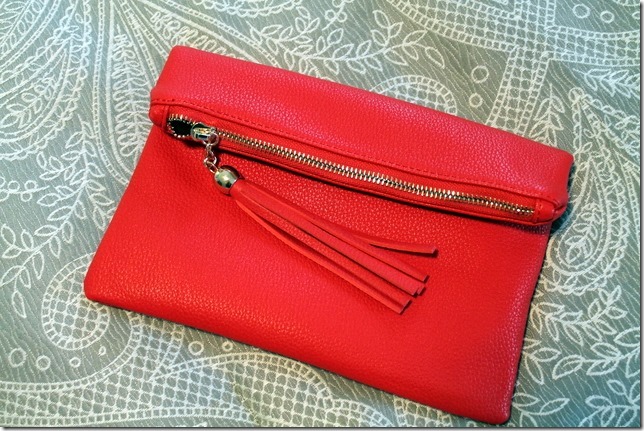 I loved how it can be used for a clutch and also had a chain that you can attach to wear it over the shoulder. 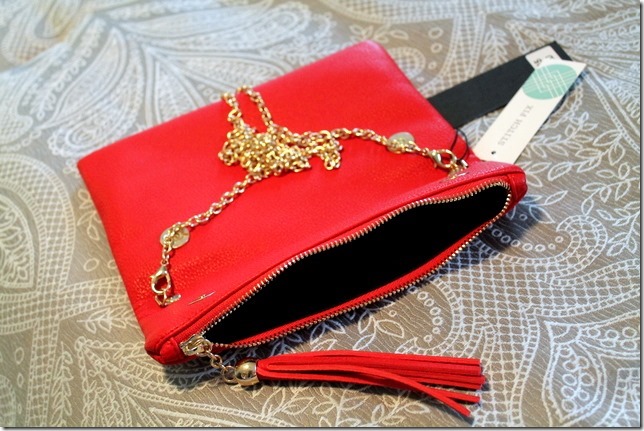 It was a beautiful color too, but in the end, I talked myself out of it because I really don’t use clutches all that much anymore. I also bought a pretty mint green one last year that barely got any use, so I figured it would probably wind up just sitting in my closet if I kept it. 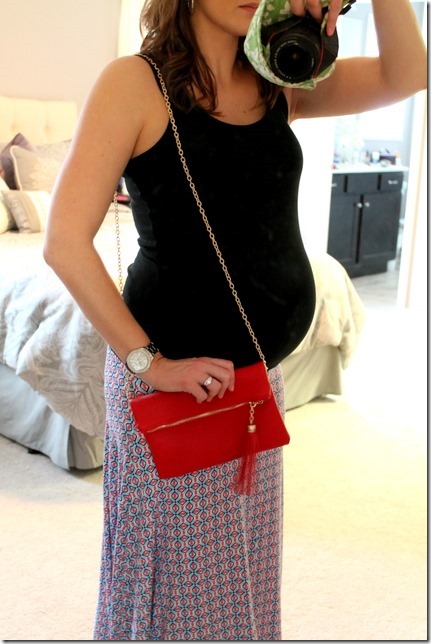 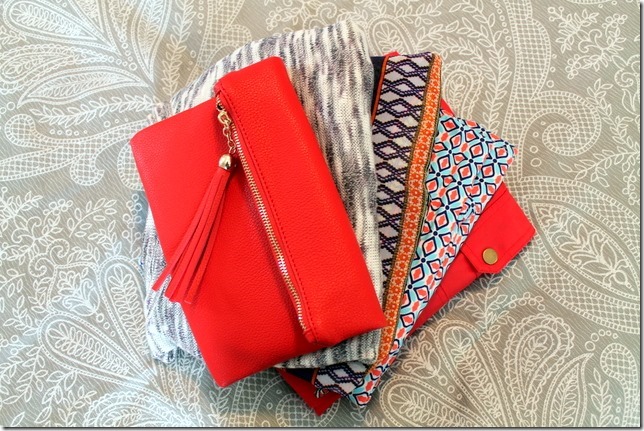 Overall, I’d say my stylist did a really great job of sending me items that I asked for (with the exception of a blazer), and most of my decisions to return were just because they didn’t look right on me and/or wouldn’t get used/worn enough.

Either way, I still always have a blast receiving my fixes from Stitch Fix, and as long as I wind up keeping at least one piece then I’m not losing anything! I think I’m going to skip next month and possibly try one more in May…but then again, I may just wind up waiting until after the baby arrives. So we shall see!

Anyone else tried Stitch Fix lately? Receive anything awesome?