Ahhhhh. Hello, weekend. It’s so nice to see you. Especially considering the fact that I didn’t get to enjoy you one teeny bit last weekend.

But backtracking a bit…I never had a chance to make it back to the computer after yesterday morning’s post, so let me fill you guys in on the rest of my Friday!

The highlight of my afternoon yesterday would most definitely have to be the lunch date that I got to have with hubby at Panera. I had to head out of the office for a couple errands, so I figured I’d see if he was around to meet up. Lucky me, he was. 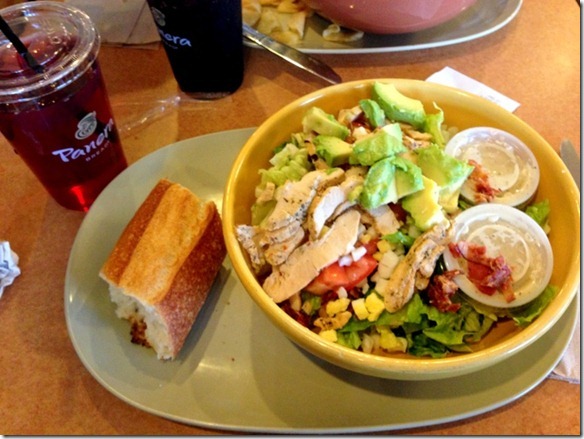 For my lunch, I decided to try a new-to-me menu item, the Chopped Chicken Cobb with Avocado salad (with no cheese, and dressing on the side). I must say that this salad absolutely rocks. Just check out all of that fresh avocado up in there! 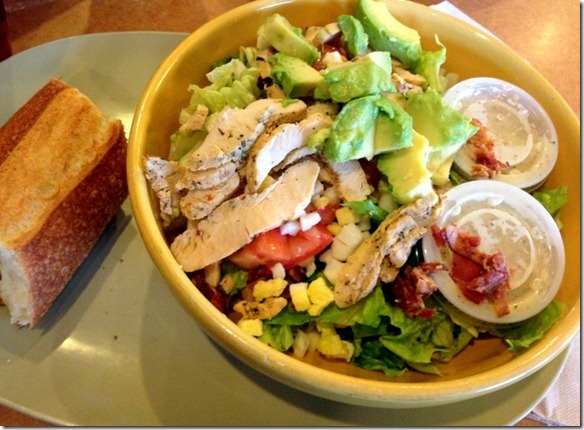 I will most definitely be ordering that again. Without a doubt.

Fast-forward a few hours later and Jay and I were over at our friends’ Joe & Kate’s house for a little Mexican fiesta. Ever since Kate had texted me early yesterday morning, I had been craving the Chipotle-inspired meal alllllll day. 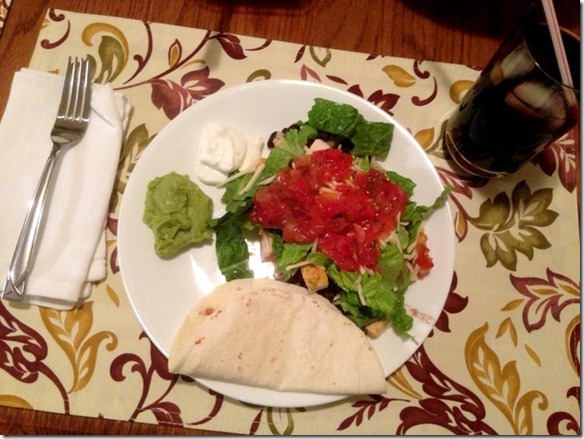 Sure enough, it did not disappoint!

There was plenty to choose from, so I made myself a plate of cilantro-lime rice, black beans, chicken, lettuce, cheese, salsa, guacamole, plain Greek yogurt (aka, sour cream), and a tortilla. 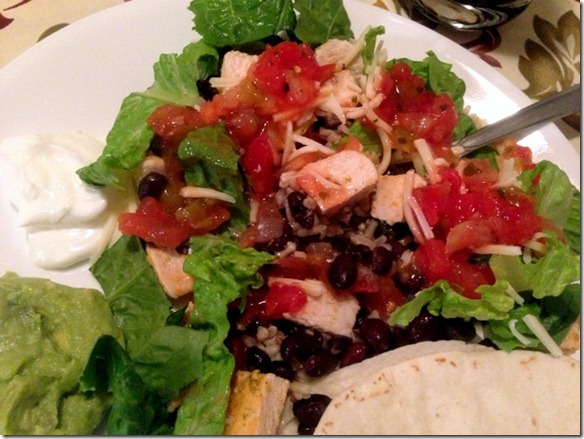 We also had an abundance of lime tortilla chips which just so happened to be sitting right in front of me on the table. Umm, yeah. They stood NO chance. Those things are GOOD.

Shortly after dinner, Kate brought out some dessert (peanut butter chocolate chip cookies!) and we broke out Apples to Apples for some entertainment. As always, the game was hilarious and we all had plenty of good laughs. 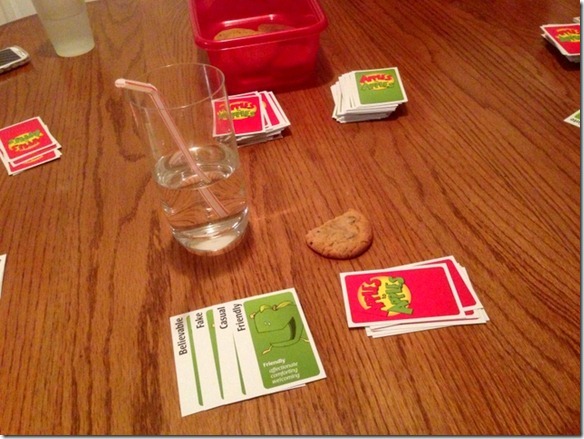 Actually, the whole night was filled with laughs, and often had us going off on tangents about different stories and memories that we have (the four of us really do have some good ones). At one point, we were all looking through all of our old Facebook photos to see if we could find certain ones that matched the stories we were trying to tell Joe’s friend, Alan, who was visiting from out of town. 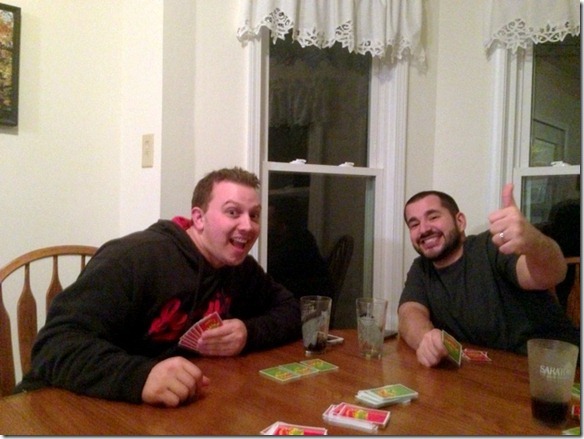 One of those memories happened to be from Jay’s birthday, back in 2008. It was one of those nights that you just expect to be a random, fun night out, but turns out being one of the best memories you’ll ever have.

You guys should be able to recognize a few faces.

It was definitely one of the. best. nights. ever.

I looked a little bit different 4-5 years ago, huh? Haha.

The other memory that got brought up, which is always a hilarious story to tell, was a night where the four of us (me, Jay, Joe, and Kate) went to go see The Dark Night then wound up at a bar, drinking a few too many drinks in an hour a half, and walked back home to Kate’s apartment at the time.

Yes, that is Joey holding a brick. He had wanted to pick up anything and everything that he could on our walk back to the apartment. So random, but so funny for us.

Poor Alan…he dealt with hearing quite a few stories last night. Hey, luckily he was a cool guy and didn’t seem to mind, but I decided he was even cooler once he broke out this absolutely delicious dip that he had brought over to share. 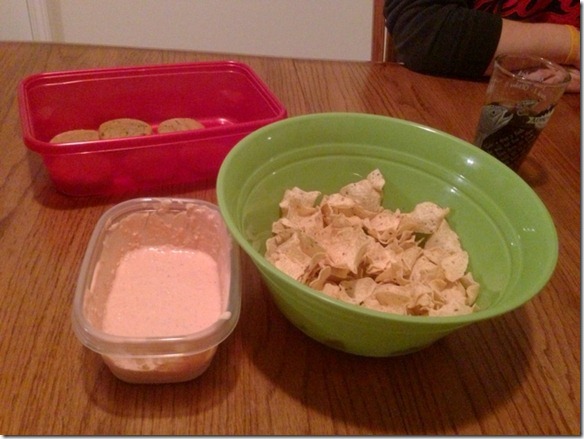 And the best part about it is that it’s super simple to make…he said he just puts two blocks of fat-free cream cheese and a jar of salsa into the blender. Mix it up and, voila! The most delicious, addicting chip dip you’ll ever have. Actually, for those of you who have been to Applebee’s and tried their Chicken Fajita Rollup, the dip tasted JUST like the mexi-ranch dipping sauce that comes with it. Just a little FYI.

Finally, just before midnight, I had to call it a night since I was getting pretty sleepy and was the DD for the evening (Jay is definitely enjoying his permanent, 9-month designated driver!). But we both had a fantastic night with two of our best pals.

This morning, I allowed myself to sleep in with no alarm, which kept me snoozing until about 9am. It was wonderful. Of course, I woke up starving, so I immediately went out to the kitchen to make some breakfast. 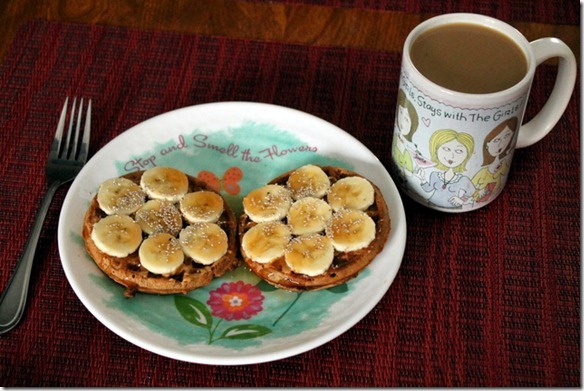 And you know, I think this is the first meal that I’ve gotten to shoot in real sunlight in weeks. Just a little random factoid, in case you were interested. 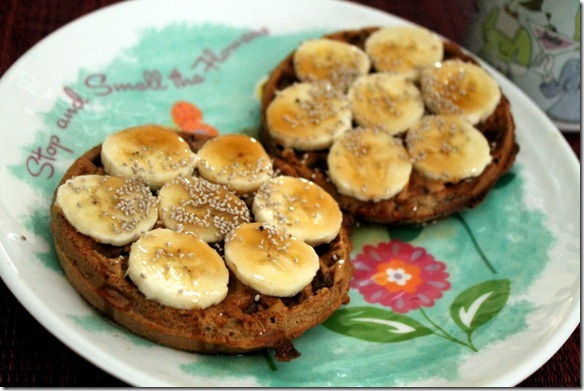 They tasted so good, and totally fulfilled the craving I was having for them during the week. Unfortunately, I still haven’t managed to get myself up on time to make them in the mornings before work – I mean, I guess I could, but I’d be racing out the door with them and eating them in the car – so this was perfect.

Currently, I actually have some lofty goals for today…workout, house cleaning, Sephora, blog work, food prep…but we’ll see how many of them I actually get to. First thing up will be that workout though, because I am craving a good one this morning!

Have a fantastic Saturday, my friends.

What are some of your favorite games/board games to play with friends?