Every once in a while, I’ll have to go through the hundreds (err, thousands) of photos on my phone to clear out space. I’m not the only one who has to do this, right?

Well the other day, as I was going through my usual cleanup, I noticed that I had quite a few food pictures on there from the past couple of weeks that never made it to the blog. Some of them were taken to be shared in a weekly meal plan post, but that hasn’t happened in a couple of weeks…

Sooo, before they go and hit the trash can, I figured I’d share them with you guys (because some of them were REALLY good!)

Kodiak Cakes! I recently received a generous box full of goodies from Kodiak Cakes, and I had forgotten just how good they are (our other boxes of them have been boxed up and we haven’t opened up many of our other food boxes lately). 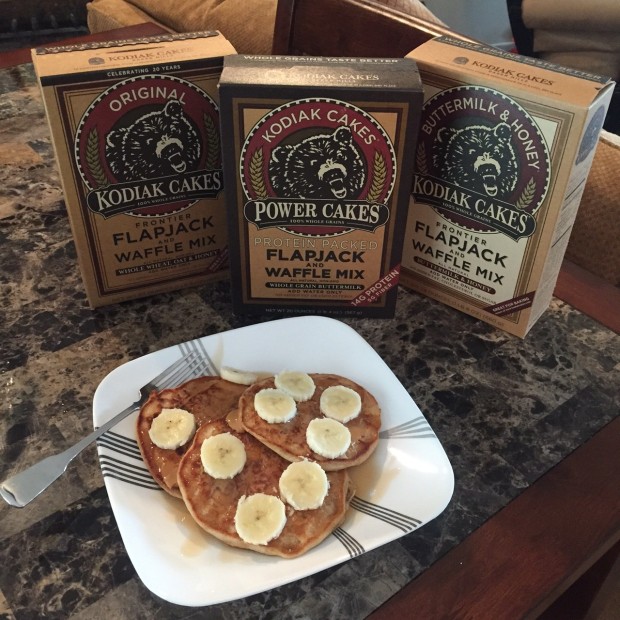 Because our dinners have been a bit all over the place, I’ve been trying to make the extra effort to at least ensure I get some veggies in at lunch. Most of the time, that has meant salads, but there have been a few wraps thrown in there as well.

Last weekend, I had a craving for roast beef from the deli, and I enjoyed that in some wraps with provolone cheese, avocado, and lettuce for a few days in a row. 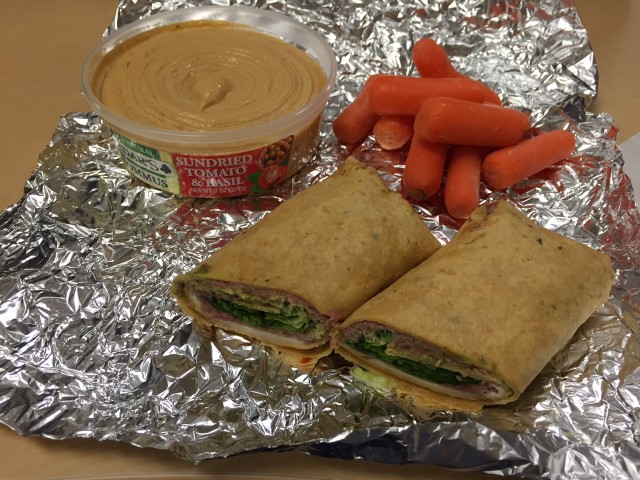 And, umm, can I tell you how good the baby carrots with hummus were? It had been so long since I’d had that snack (and I used to eat it almost daily)!

I also enjoyed the last of the roast beef in a salad, along with some deli turkey and feta cheese. 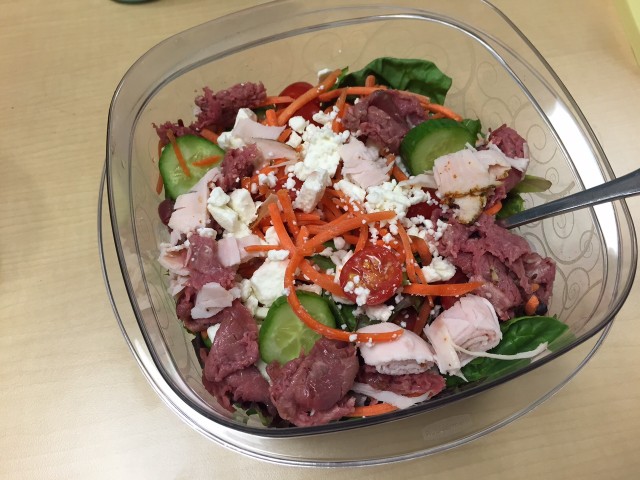 I really don’t eat roast beef all that often, but if it always tastes that good, I may need to get it more often!

Other salads as of lately?

A grilled chicken and blueberry salad with some shredded carrots and greens. 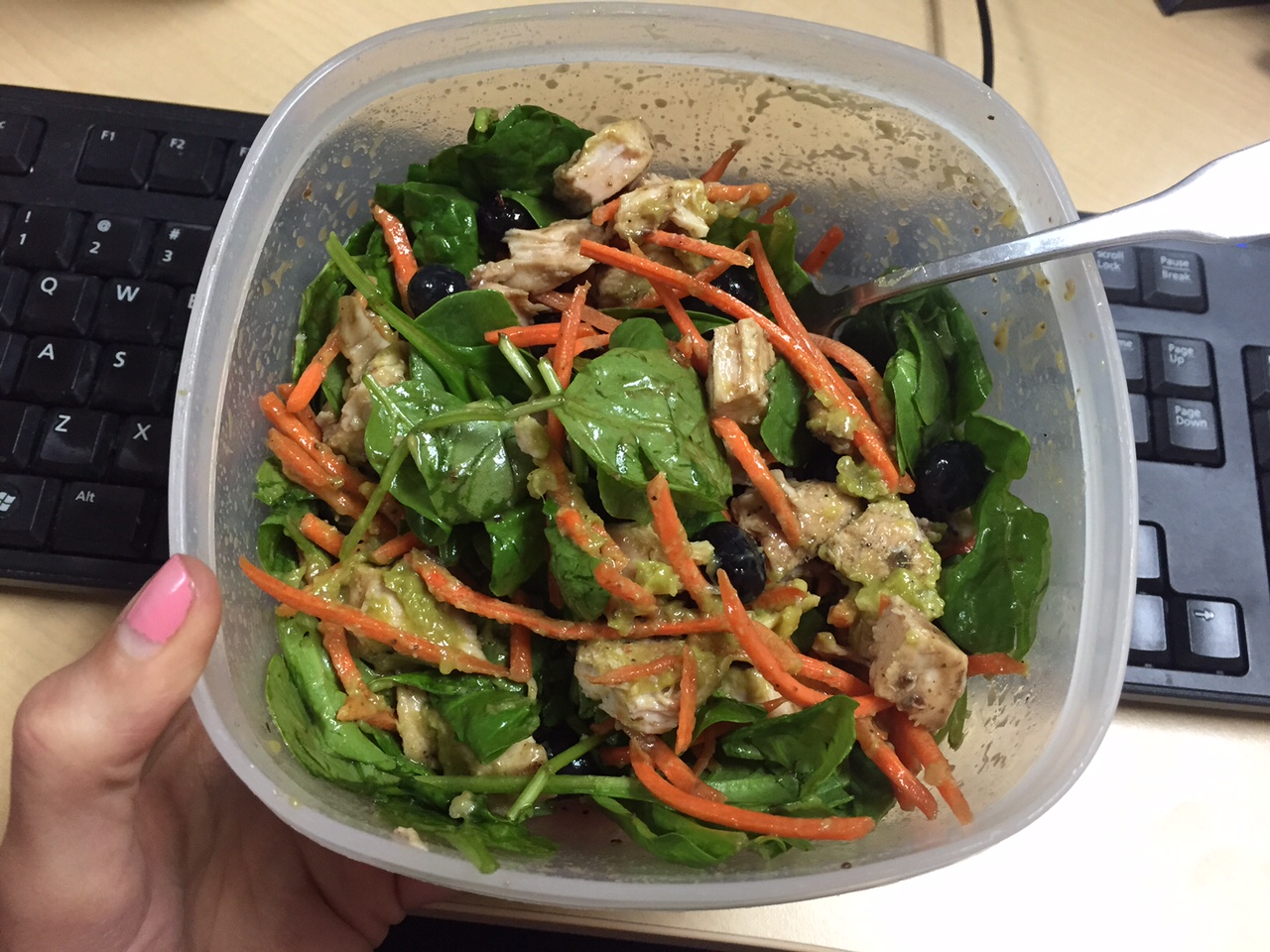 That was definitely a “use up what we’ve got” sort of salad, but it was delicious just the same.

Then there was the always yummy strawberry, feta, and avocado salad with grilled chicken. 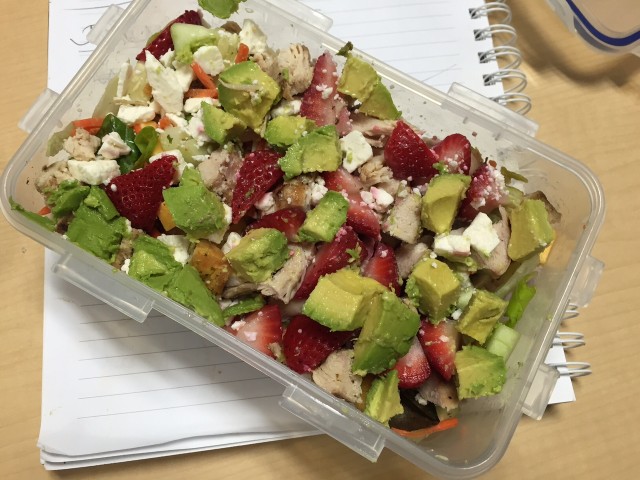 Strawberries + avocado in salads = one of the best combos EVER.

Then there was also this random mixing bowl of a salad thrown together with leftover veggies and dressing (from one of the dinners below) plus deli chicken. 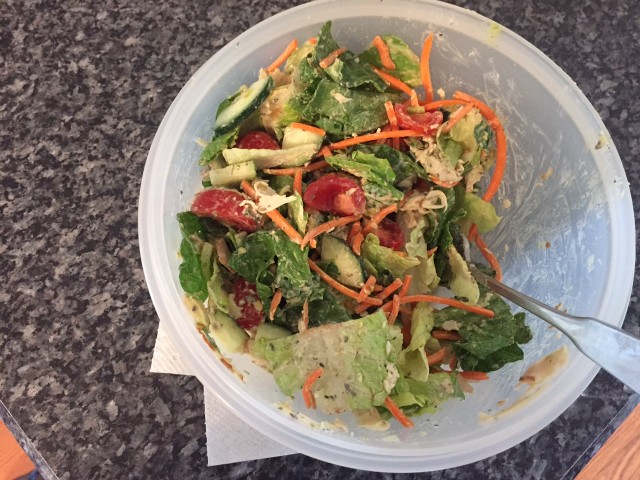 A couple of weeks ago, I had a Blue Apron order delivered to the house. I still had my account set to the family plan, so we had enough to share with my parents, too.

The first meal we had was Chipotle Spiced Chicken with Pepita Rice and Zucchini-Tomato Salad. 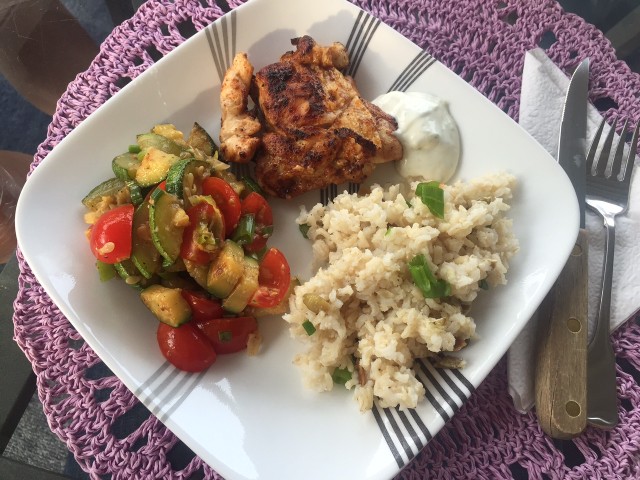 The whole meal turned out awesome, but the zucchini-tomato salad really hit it out of the park. Everyone agreed that it’s something that totally needs to be recreated (and it’s SO easy!).

The second meal we had was this Summer Squash Cavatappi with Fresh Mozzarella and Chopped Salad. 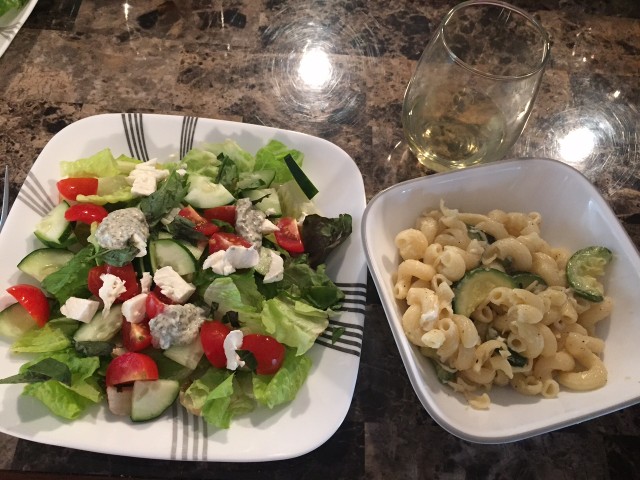 I fell in love with the simplicity of the dressing that was used for the salad, but the pasta dish was a little bland for our liking. It just seemed like it needed a little something…extra.

As for more dinners you’ve missed?

When I was out to dinner with the girls last Thursday, I ordered a chicken sandwich with fries. 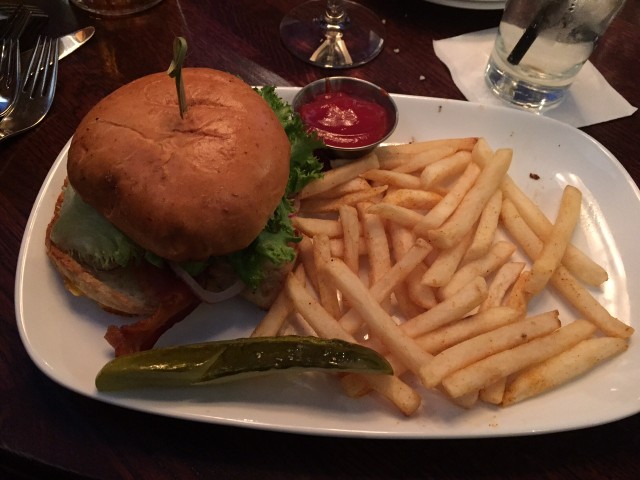 It was pretty good, but the company was way better. ;)

My mom made the most amazing Reuben sandwiches a couple of weeks ago, which were paired with some simple side salads (and homemade Russian dressing!). 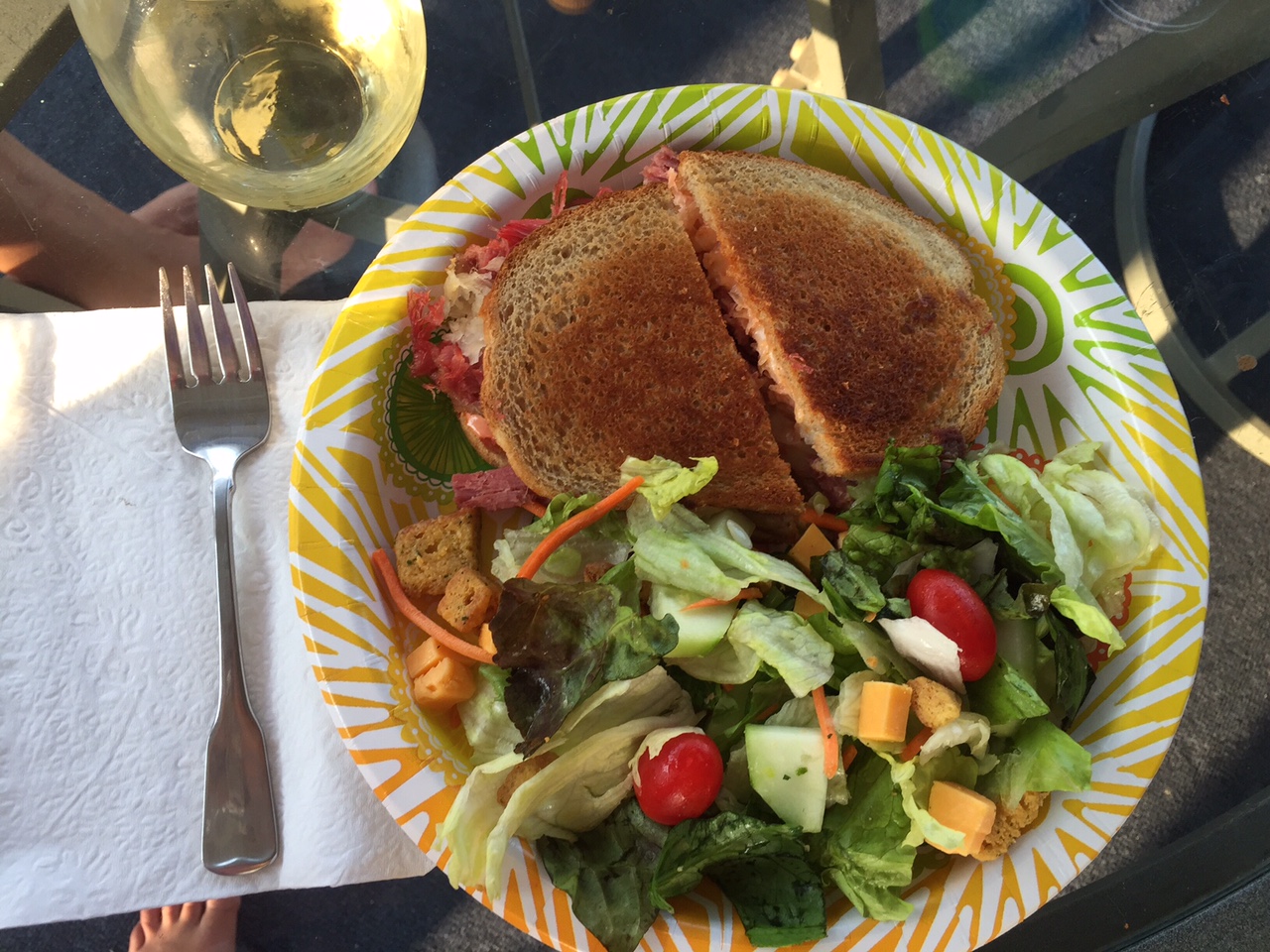 And of course, there’s always going to be some pasta with mom’s homemade sauce and meatballs. 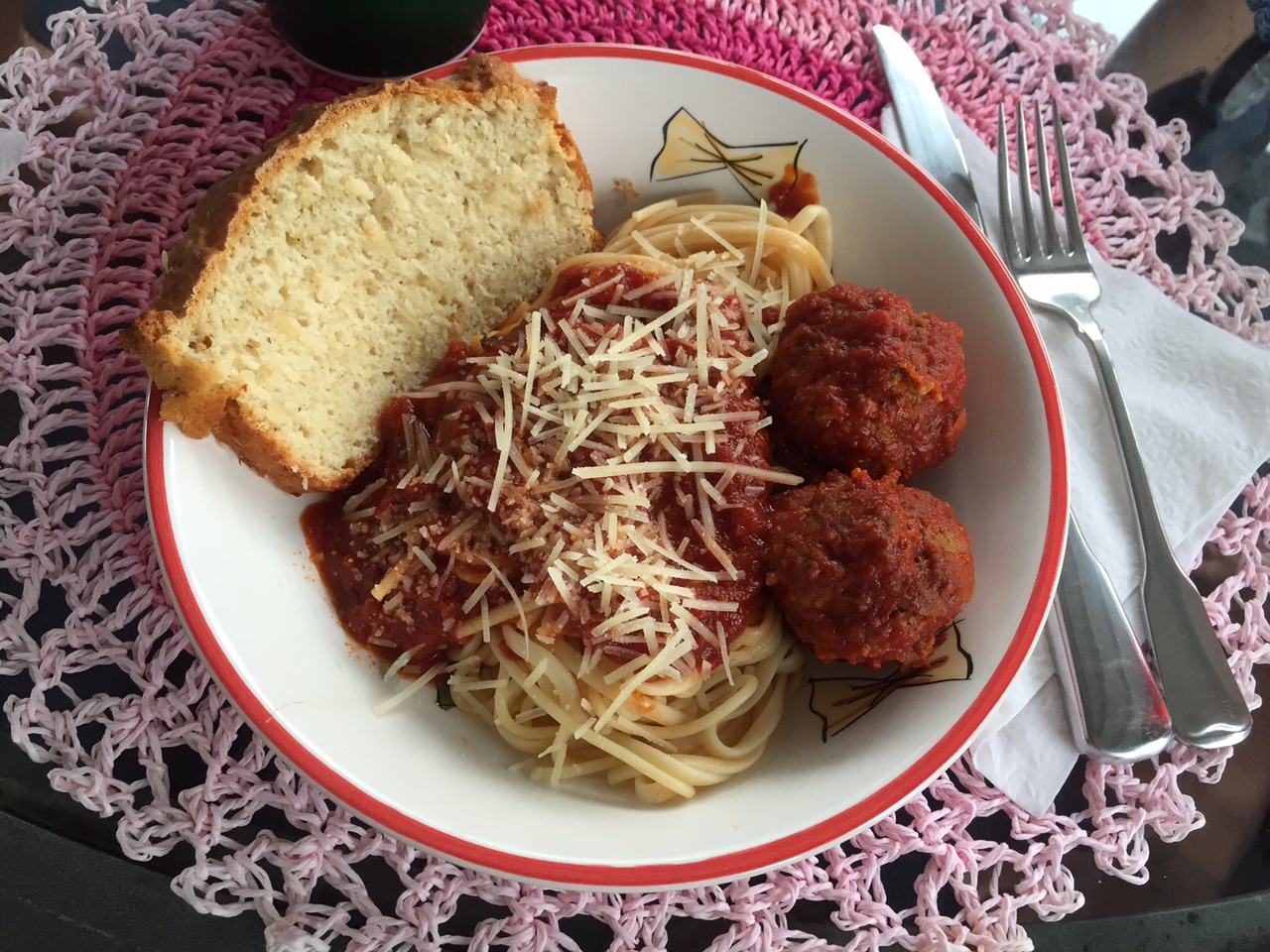 How about you guys? What meals have been knocking it out of the park for you lately?

« Back to School with Sears {Giveaway!}
July Stitch Fix Review »