Turns out, President’s Day is a day that my company gives us off every year. And wouldn’t you know it, I always forget about it until a few days before when my calendar reminds me, so it was a pleasant surprise!

Since Lucas’s sitter was closed for the day, the two of us had another Mommy + Lucas Day just like last year. And sure enough, it was oddly similar. 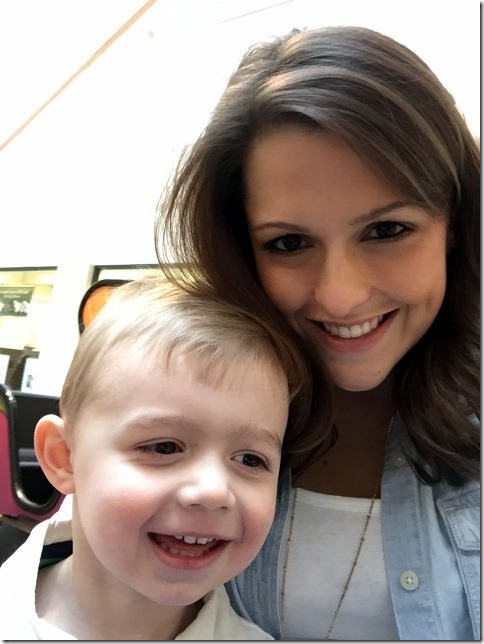 I debated on setting my alarm to get up early to get a workout in, but Jay and I stayed up later than usual watching the Jimmy Fallon Valentine’s Day Special the night before, so I knew I could use the extra sleep. So instead, I slept in until about 7:15am, and it was awesome.

I heard Lucas on the monitor shortly after I got out of the shower and ready, so I got him up and we started off our day with pancakes. Kodiak Cakes, to be exact, because the boy requested them. Even if he only ate about half of them and proceeded to inform me that he was “all done,” as evidenced in this photo. 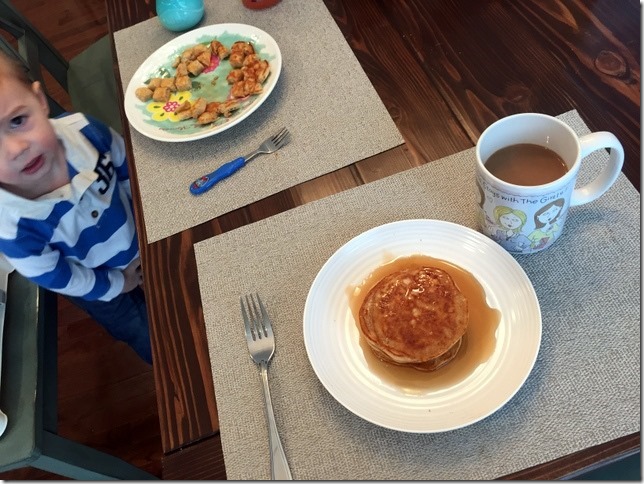 So, you know…I finished mine off and then helped him out with his too because who likes wasting food??

Shortly after we finished our breakfast, we were headed out the door. Our first stop of the day was Target for a few items, including some impromptu food pouches (he never eats them these days, but had to have them) and diapers. 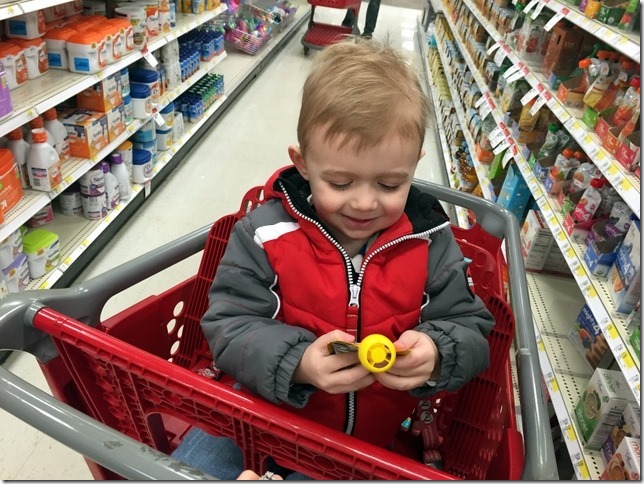 We’re debating on attempting potty training maybe later this month or next, but for now, we’re still cruising in diapers. Since Target is having the $10 gift card with purchase of two boxes right now, I also got a box of newborn diapers…gahh!

After Target, we made our way over to the mall. I had the gift certificate from my perfume sampler at Sephora, so since I decided on a perfume (Daisy by Marc Jacobs) I cashed that in and also picked up my free birthday gift. 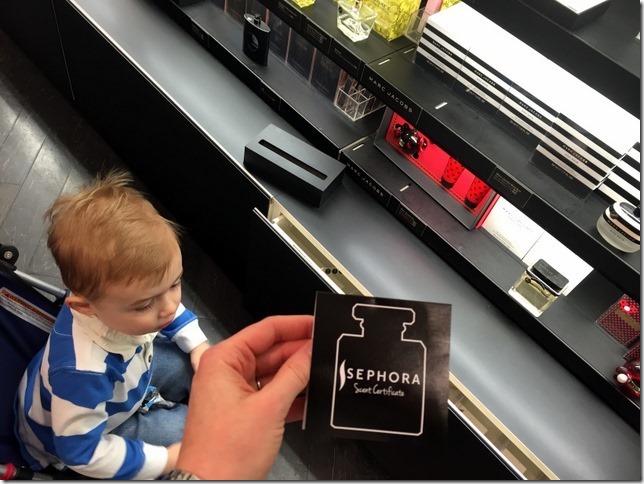 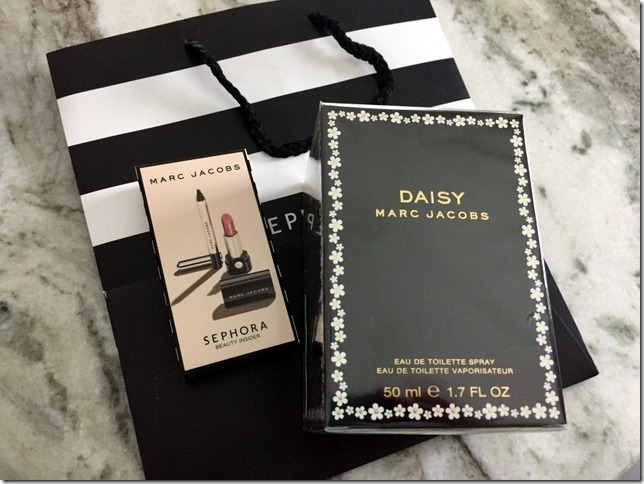 Believe it or not, I walked out of Sephora without spending a dime. You should be proud of me, Jay! 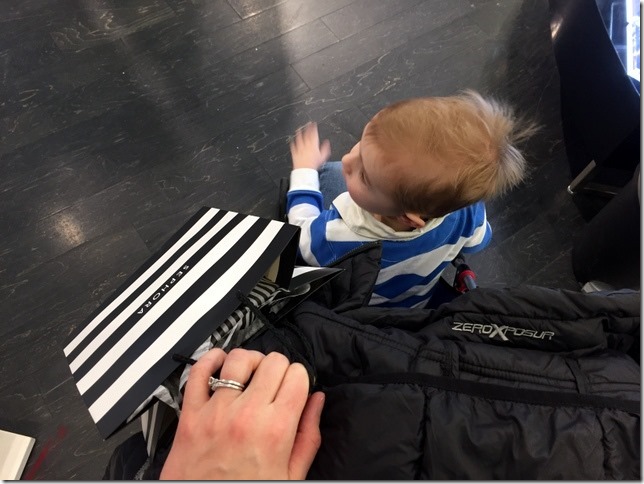 After we finished up in Sephora, we made our way over to Barnes & Noble. Well, at least we tried to…until Lucas spotted the red car. 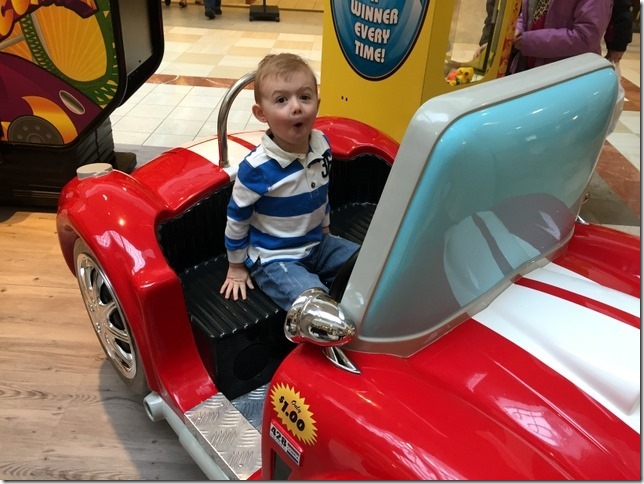 It was NOT easy getting him off of that thing…he was obsessed. 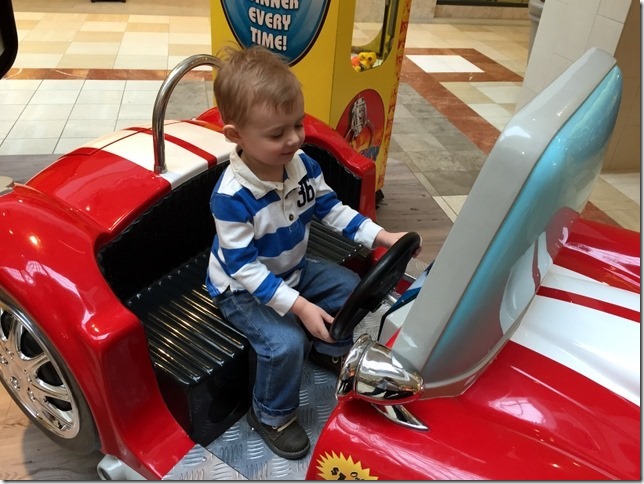 So I spent $3.00 on about a minute and a half’s worth of riding time, and then finally peeled him off to head into the book store.

We had fun reading a few stories and playing with some of the toys, but it was pretty crowded so we didn’t stay too long. 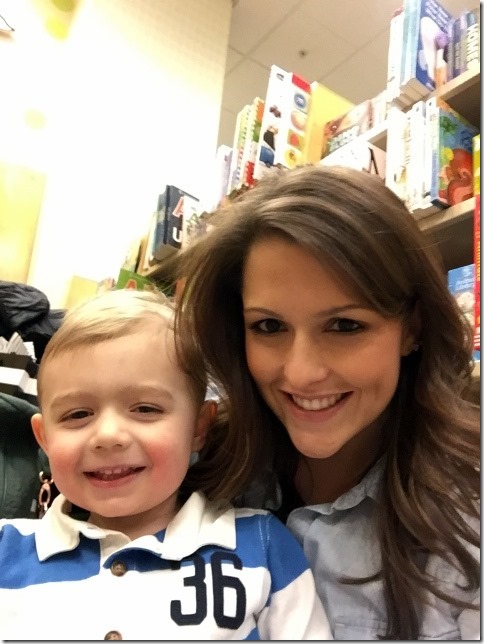 After we left the mall, I decided to call my dad to see if he’d have a few minutes available for us to stop by. Lucas had been talking about his papa all morning, so I thought it’d be fun to stop by for a quick visit! 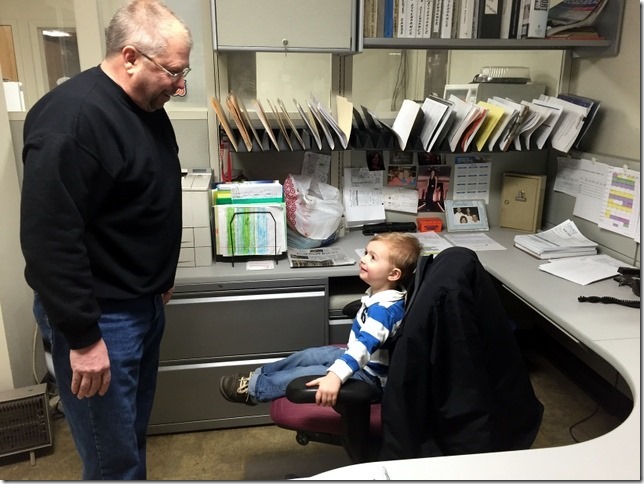 Lucas was SO excited to see his papa and play around in his chair. He was also equally excited to see that he had a fully stocked snack drawer (like father, like daughter) so he managed to walk away with a few new snacks in his belly.

It was getting pretty close to nap time at this point, so we said our goodbyes and headed home. Lucas went down for a nap no problem (woo hoo!!) so I put together a quick mini lunch for myself. 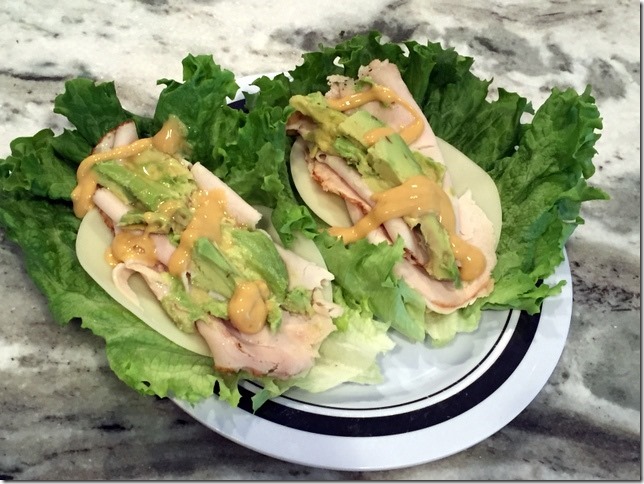 I made a couple lettuce wraps with deli chicken, provolone cheese, avocado, and honey mustard. They were SO good! I also ended up snacking on way more than this later, so don’t anyone go thinking this was my lunch. Baby has been huuuungry these past few days!

While I probably should have just vegged out (or squeezed in a workout) during his nap time, I spent most of it switching laundry and working on the computer with blog stuff. There’s always something to do!

Once Lucas got up from his nap, we spent all sorts of time jumping around on the trampoline, and then hung out with daddy once he was home from work. It was a GREAT day, and definitely a day that makes me sad I don’t get to do it more often. Such is the life of a working mama I suppose, right? But at least it makes the days we DO have that much sweeter. <3

Oh, and speaking of mom stuff…what are you guys doing tonight at 8pm EST? Hopefully nothing, so you can join myself, Colleen, and Stephanie for a fun, LIVE video chat!! We’ll be chatting tonight from 8-9pm EST on Blab, and if you haven’t already watched any of her blab videos, tell me you’ll come tonight?!

It’s all about candid mom chat, and you can even participate by asking questions during the video. So you’ve gotta come!! You can subscribe ahead of time via THIS LINK, or just click that link later on tonight.

How was your President’s Day? Anyone else have it off? Do anything fun??