Good morning, friends! How’s everyone doing this morning? I’ve been having a rather productive morning myself, starting out with a nice 35-minute treadmill workout.

I did a mash up of inclines and running/walking speeds, honestly not really paying much attention to it. I did cover about 3.2 miles, however, and was a sweaty mess felt great afterward. I think next time, I might try alternating the running and walking intervals of my Pyramid Treadmill workout…that would be fun!

Post-workout, I actually wasn’t all that hungry and it took me a good 30 minutes to actually feel ready to eat. So I sipped on some coffee, did some laundry, and then finally worked up an appetite for a smoothie bowl. 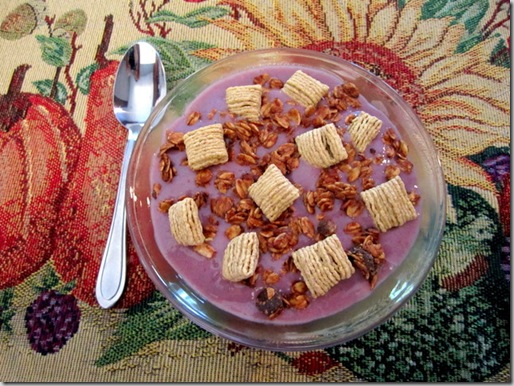 Today’s smoothie bowl was actually the same as my Raspberry Almond Smoothie I had last week, just with the addition of 1/4 tsp xanthan gum (I can’t do much more than that…hurts the tummy) and frozen raspberries in place of fresh; both of which made today’s batch extra thick and creamy. I then added some Quaker Oatmeal Squares + Love Grown Foods Cocoa Goodness granola as finishing touches. 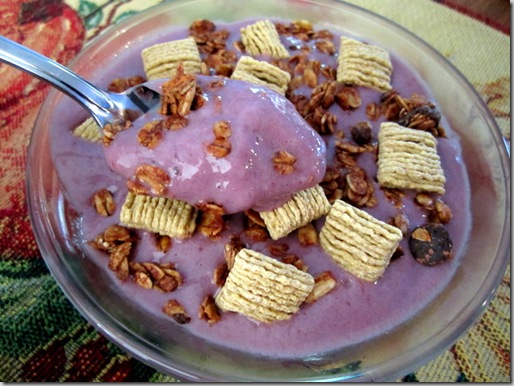 When I made a smoothie bowl last Friday, I had a few of you ask why I decided to make it as a bowl rather than just sip on it like a smoothie. Honestly, I think it really just depends on what kind of mood I’m in, but with the bowl, I almost feel like I’m getting “more bang for my buck.” In other words, it kind of seems like I’m getting more food because I’m eating it, rather than sipping on it. Hopefully that makes some sort of sense. 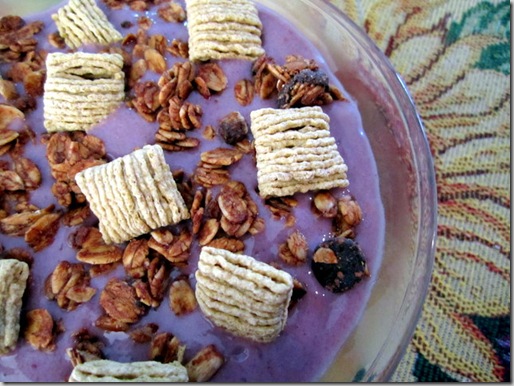 Maybe some of my fellow smoothie bowl fans can weigh in on this one for me?

I almost added a slice of banana raisin pumpkin bread with my smoothie, but I’m actually feeling rather satisfied from this right now, so I’m holding off until mid-morning. I really love spacing out meals anyways…more opportunities to eat.

WOULD YOU RATHER (sorry, we skipped yesterday!)

« Dressed Like a Champion
Snacks and Studying at Starbucks »