For being a Monday, yesterday wasn’t half bad!

I missed my workout, but it’s all good because I power walked the aisles of Target on my lunch hour, so that’s gotta count for something, right? Oh and actually, now that I think about it, I did run around outside with Lucas quite a bit after we got home. So, yeah, all good over here!

As usual, I wound up not giving myself much time to put food together in the morning, so since I was running late, I grabbed whatever I could get my hands on quickly for breakfast. That included a yogurt (topped with granola I keep stashed in my desk) and a banana. 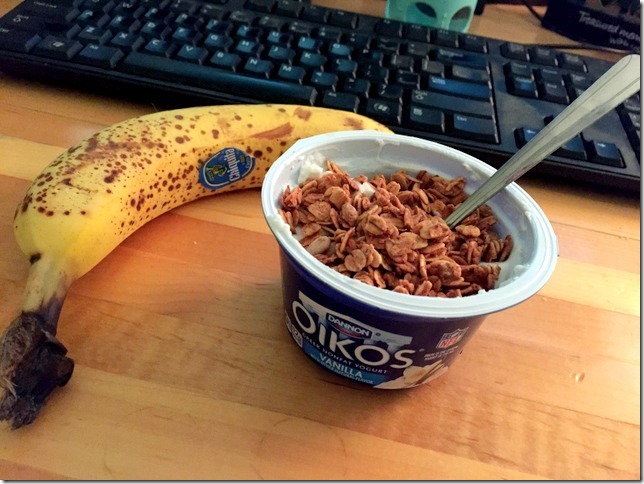 A couple hours later, I also thoroughly enjoyed another piece of this weekend’s coffee cake. 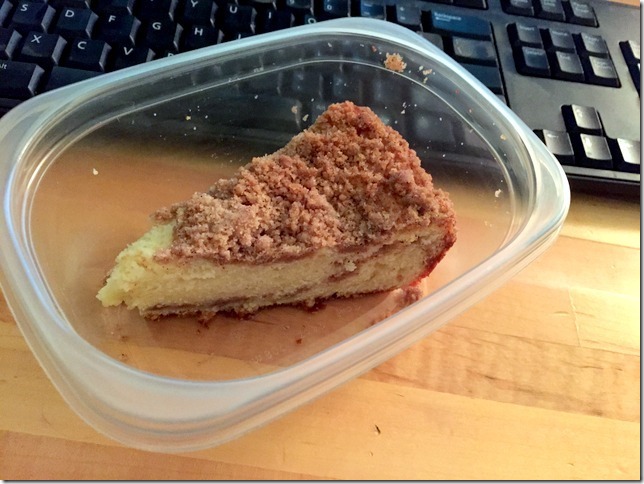 Lucky for me, I made an extra salad on Sunday when I made this delicious one, so all I had to do was grab that from the fridge, too. 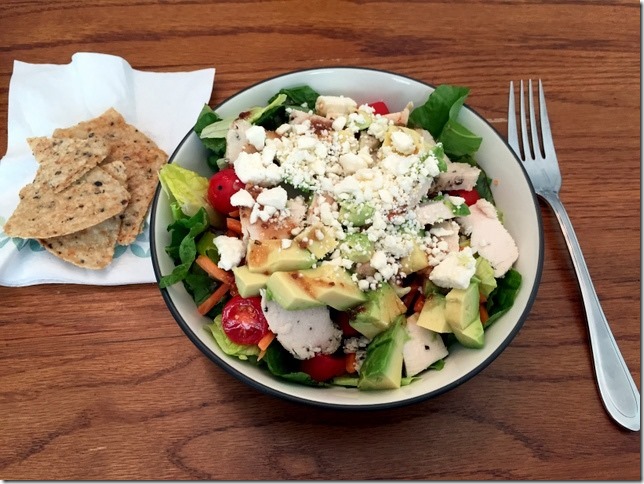 I’m kicking myself for not making one for today!

On my lunch hour, I had to head over to Target to try and return one of the pairs of PJ’s that I bought for Lucas the other day. I washed and dried them, and then as I went to put them on him, I realized the pants were wayyyyy too short.

Turns out, someone must have swapped out the 3T bottoms for 18 months?! Thankfully, Target took the return despite no tags or a receipt. Win! I was really tempted to pick up this sweater while I was there, but I had to hold myself back.

Okay, maybe I’m kidding on that one. 😉 But I will say that I am loooooving this sweater!

After an afternoon of work, it was time to go pick up the kiddo. I was in need of a snack, so I grabbed some goodnessknows snack squares from my desk stash. 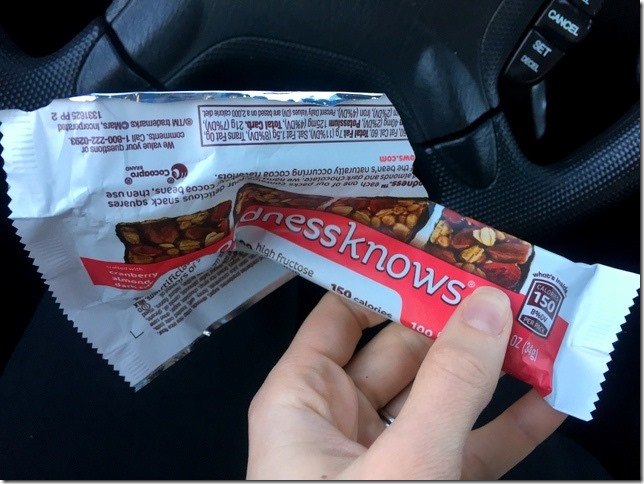 These things are just so good! 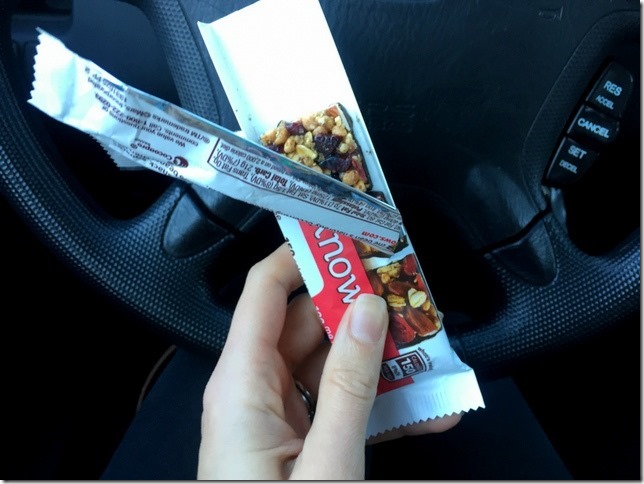 Once we got home, we spent about an hour playing outside until it started to get dark (damn you, 5pm darkness!) and then, much to Lucas’s dismay, came back inside. Once he got over having to be inside, we had some fun playing in the living room and making “happy” and “sad” faces for the camera. 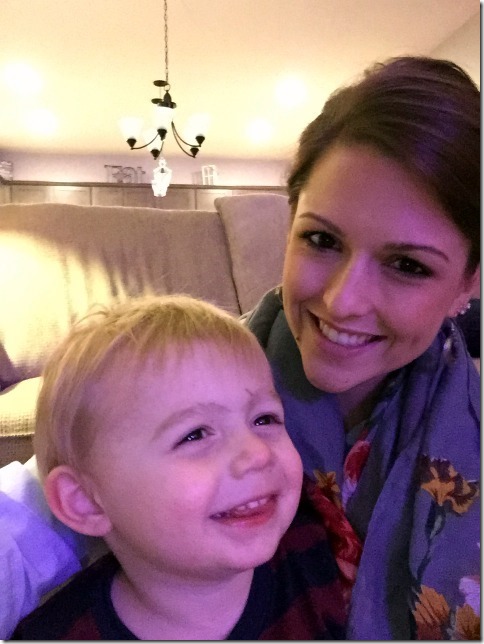 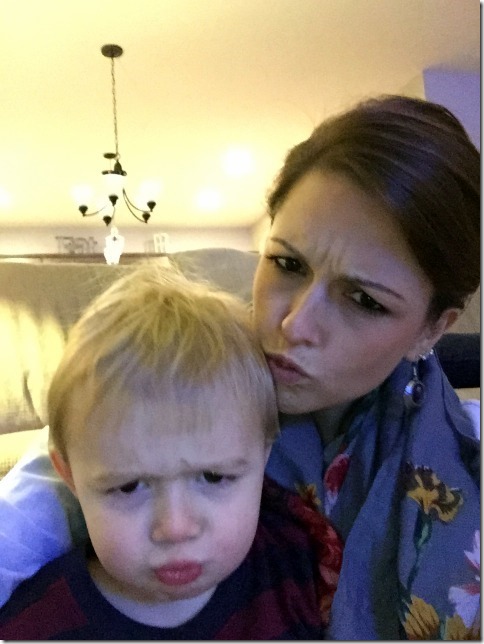 He’s such a goof.

Dinner was quick and delicious…homemade pizza! I used a garlic and herb dough from TJ’s for the crust (love that one!), some sauce, cheese, leftover peppers and onions from Sunday’s dinner, and some frozen broccoli on the side. 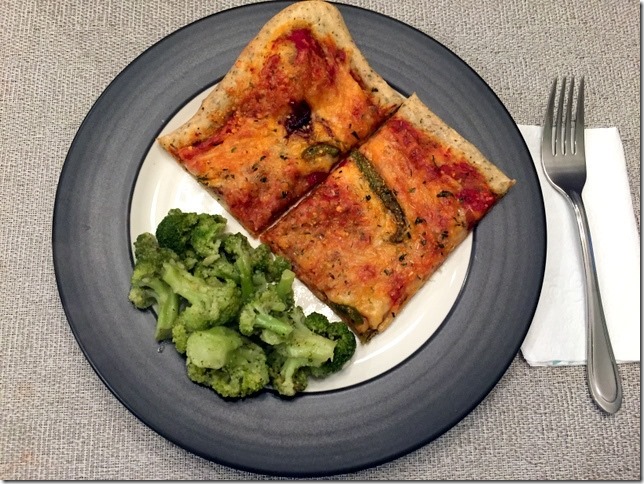 We were trying to figure out when the last time was we made homemade pizza and it’s got to be at least 6 months maybe? Because I’m pretty sure we hadn’t made it since living in our old home. Wow!

Dessert was had, no pictures taken…but I took a trip to the leftover Halloween candy stash and enjoyed a few pieces out of there. Lucky for me, Jay doesn’t believe in peanuts or peanut butter in candy (SAY WHAT?!) so I get to keep alllll the Snickers for myself.

We watched our DVR’d episode of Quantico (I am totally, 100% HOOKED on this show!) and then called it a night shortly after that. So yeah, I’d say it was a good day for a Monday!

Anyone planning on doing any shopping with the Veterans Day sales happening? There’s a ton out there, and here are a few of my favorites…

Disclosure: This post does contain affiliate links. Your support of STSL is always so incredibly appreciated <3.

« I Ate Some Delicious Food This Weekend
A Delicious Gift Idea {+ GIVEAWAY!} »