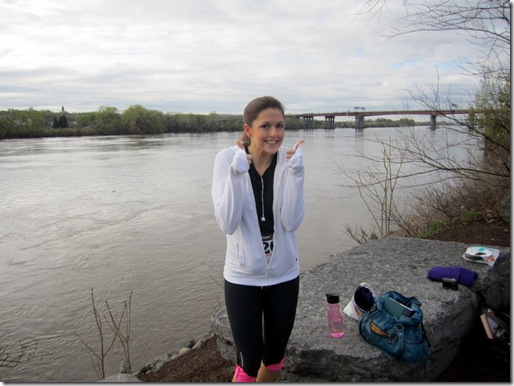 Before leaving the house, I snacked on a piece of almond butter + banana toast for some pre-race fuel. 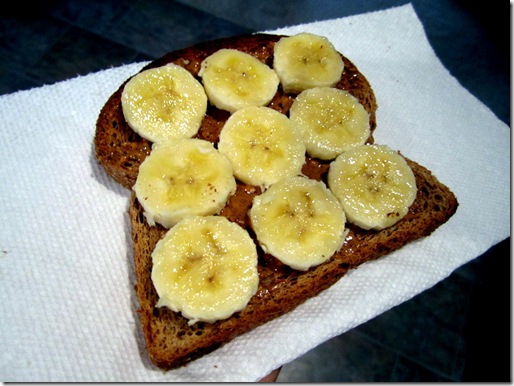 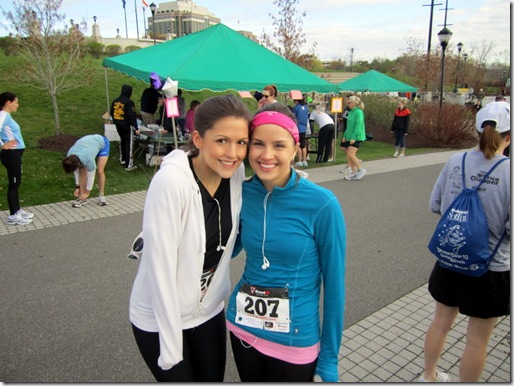 My girl Eileen and I drove down at the same time this morning and were a little early, so we did what we could to keep warm. You know, hopping around uncontrollably looking like a fool….yup, that was me. 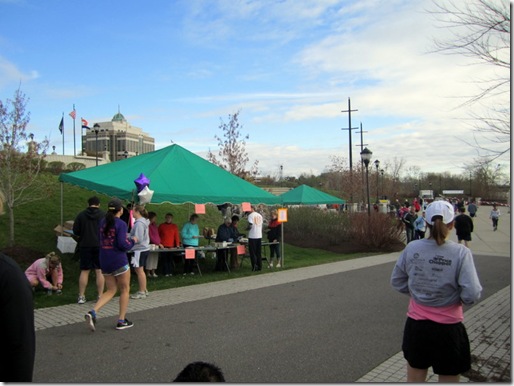 My #1 fan was also there to support me. 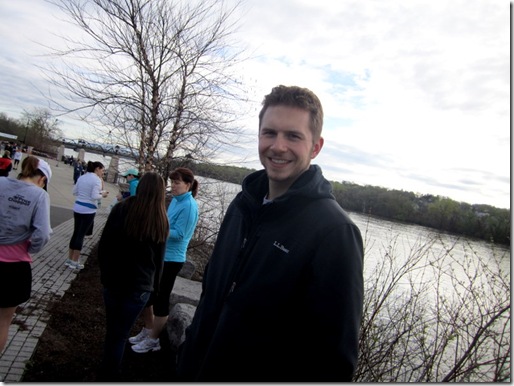 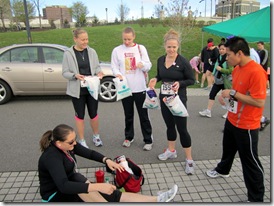 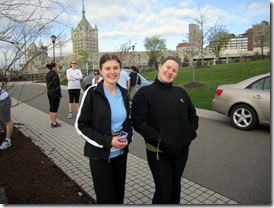 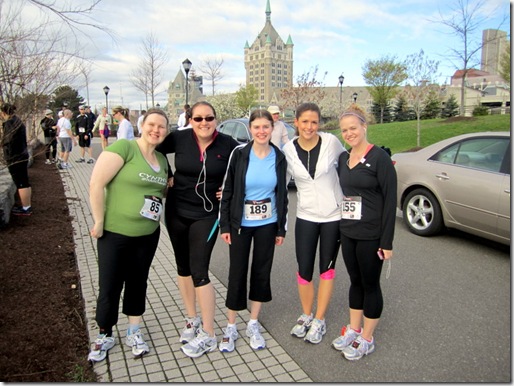 Cynthia & Emily were doing the 5K race that was taking place after our 10K, but they were awesome to come early and cheer us on.

I was so glad that I made a last minute decision to grab a pair of gloves before leaving the house this morning. My Raynaud’s was out of control, so I attempted to keep the digits as warm as I could before the race started. 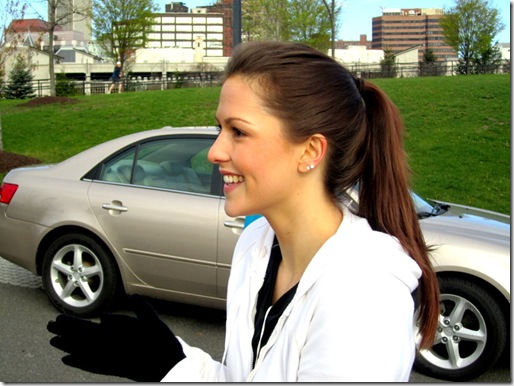 Soon enough, the announcement was made to start lining up for the race. Holy cow. 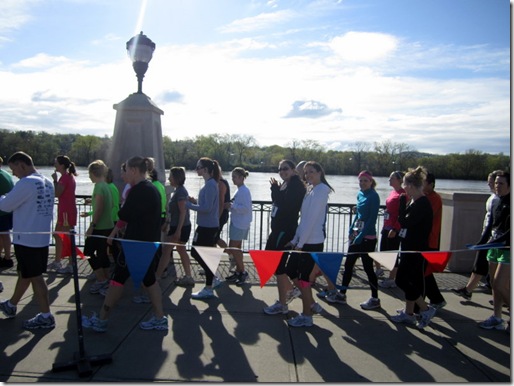 But actually, I wasn’t nervous. I think setting the tone for the race last night helped calm any nerves I may have had. Because really…it’s just a race, right? Gotta have fun with it! 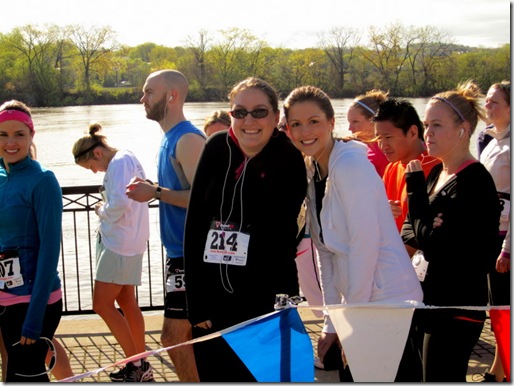 Shortly before the race started, we got word that part of the course was flooded so we were going to be re-routed, adding about 1/10th of a mile to our distance. Heyyyy, no big deal.

I guess in that case, I actually WAS close to my original thought that a 10K was 6.4 miles, not 6.2. Thanks to those of you who helped correct that for me.

Before I knew it, my legs were movin’ and I was racin’ away! Throughout the duration of the race, I had a few thoughts along the way:

Mile 1: Wasn’t too bad. My calves were pretty tight to start but eventually loosened up a bit. My fingertips were purple at this point and I could not get them to warm up.

Mile 2: Still felt pretty good. Passed by the water station and regretted it shortly after. My fingertips started turning back to white…which is a good sign.

Mile 3: Damn that was a LONG mile. I swear it was longer. By now, my fingertips were pretty much back to normal and I was still feeling strong.

Mile 4: By this point, I took my first break and walked a bit with Jen. I was also pretty bored with my playlist on my iPod by this point, so it was a welcomed change of pace.

Mile 5: I was not looking forward to approaching the muddy re-routed path that we had already encountered back at mile 2. It was gross and really difficult to run in. By this time my hips started to feel a little sore and I kept craving iced coffee…

Mile 6: First thoughts: “Where the hell is the finish line?!? Did they move it farther away???” I was reeeeally ready to be done by this point, but I was feeling proud of how far I’d made it. I took a couple quick walking breaks with Jen again, but shortly before the finish line she booked it. As soon as I saw that finish line in the distance, I smiled. I knew I was going to do it…and then, I dropped my phone on the pavement. Thankfully, it didn’t break, but I had to stop and pick it up, along with the cover that snapped off. Talk about interfering with my mojo! 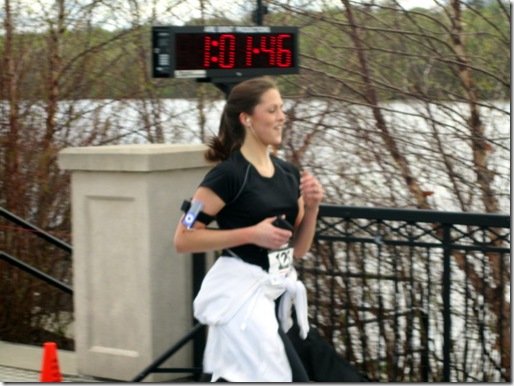 I know you wish you all had a picture of yourself that looked like that…wowwwww.

One hour, one minute, and forty-six seconds later, and I had finished my first 10K! I had no idea what to expect for a finishing time, and unfortunately, I let myself get a little bummed when I saw just how close I was to finishing in under an hour. But I only allowed that thought for about 5 seconds, and then just continued to be grateful for the fact that I did what I did at all. Not bad for only training outdoors once AND never running that distance before I suppose! 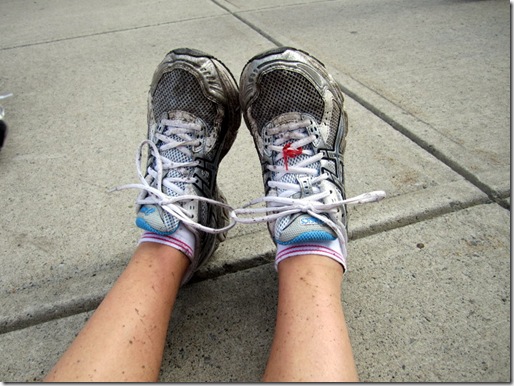 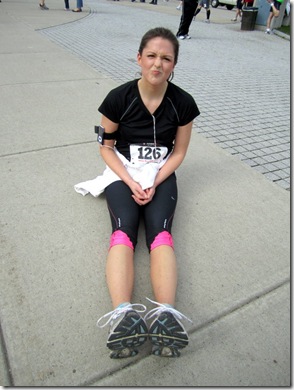 We were all so happy to have made it and done well…Hip Hip, HOORAYYYY! 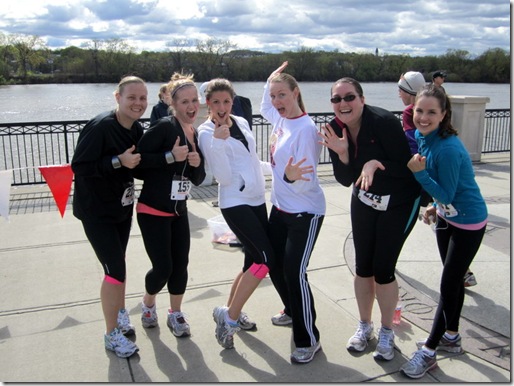 After hanging out for a bit and wishing our 5K racers good luck, I headed out to finally get that iced coffee I had been craving since mile 5. 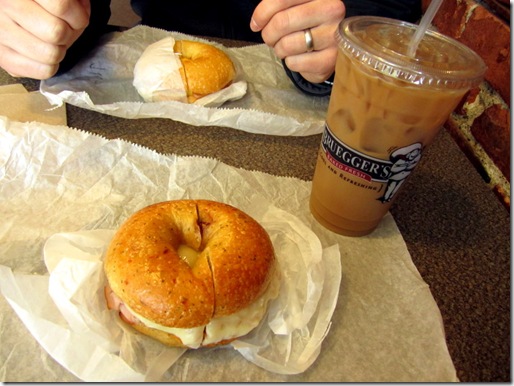 Jay and I stopped at Bruegger’s for some coffee and a bagel sandwich. I got an egg white and provolone with ham on a sun-dried tomato bagel. It was incredible. 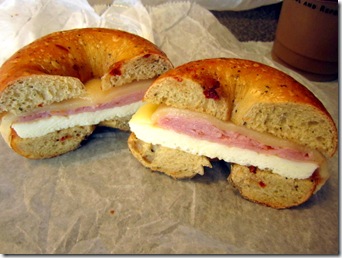 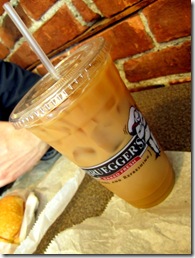 I’m so happy that I decided to run my first 10K today. It was an amazing experience, and I consider myself very lucky, not only to be able to run it, but also have such great friends to run it with!

Time to go shower and head back out for a little birthday celebration with Heather, Jen, and some pretty awesome blends. See ya laterrrrrr!

« As Long As I Finish
Birthdays and Date Night »