I’m back with some more chat about macros! In case you missed it, here is the first post from Tuesday, where Emily answers some of the most commonly asked questions by all of you.

*If macro stuff isn’t your thing, no prob; we’ll catch ya back here soon!

In today’s post, we’ve put together a list of the most commonly asked questions that were directed towards me. So I’m starting by answering the questions, and then Emily is offering her thoughts/perspective, too. Let’s get to it.

Does it ever feel too restrictive?

Courtney: I suppose that depends on your definition of restrictive. When I first started tracking, I quickly realized just how many carbs were often sneaking into my daily eats, without really even knowing it. For example, my favorite iced coffee order from DD’s typically has about 25-30 carbs; I could have a couple of pieces of whole wheat toast for that amount! So for a while, I wouldn’t necessarily say it felt restrictive, but rather, more of an awareness that had to be learned, and being mindful of a more balanced approach, just like Emily mentioned in her post earlier in the week. I never felt like I couldn’t enjoy something that I really wanted, but I did make the effort to fit it into my overall macro counts each day. 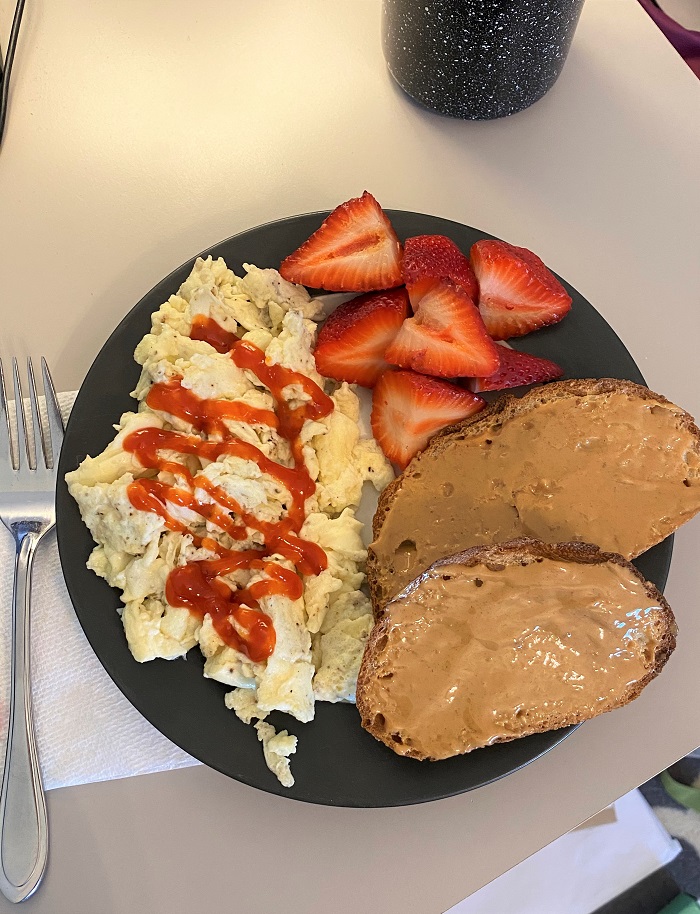 Emily: It’s interesting, my Registered Dietitian peers ask me the opposite of this question! They’ll say, “Do you ever worry that people won’t eat healthy, whole foods because they are working treats and sweets into their macros?” My answer is similar to Courtney’s: it comes down to choices because awareness is so much higher when you’re tracking. It’s impossible to hit your macro targets and feel great with fancy coffees, a handful of chips here, a few bites of fries there, and a nightly ice cream habit. In order to meet your body’s needs, it comes down to making meals with a wide variety of whole foods.

Do you find it hard to track macros when you like to cook from scratch?

Courtney: Not at all! When I’m cooking from scratch, I know exactly what ingredients are being used, and how much, so it takes out a lot of the guesswork. For me, personally, I don’t track non-starchy vegetables (as per Emily’s recommendation!) so that often helps eliminate a bunch of ingredients. The only time it can get a little trickier is if I’m making something such as a soup, which can make it harder to determine how many servings there are, etc. But I really don’t sweat it, and just do my best to estimate based on how many servings the recipe called for. 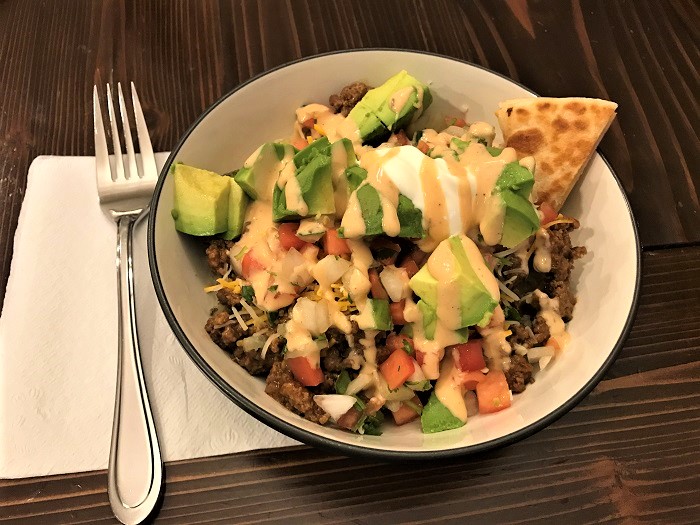 Emily: Like Courtney said, being in control of your ingredients actually makes tracking easier and with all the user-friendly features of tracking apps, it can be a breeze to create recipes once and repeat them over and over again.

When we are not in charge of preparing our food, it can be hard to estimate the portion sizes that we’re served. It’s not impossible to track if you eat out, it can make it more difficult to be precise. Remember, perfection is not required with macro tracking and you can absolutely see change to your health, body composition and athletic performance by “getting close” to your targets every day – even if you’re not preparing your meals.

How strict are you on a daily basis?

Courtney: I definitely alternate between tracking more diligently and being more lax. If I’ve taken some time really being lax and feel like I could use a bit of a restart, then I get back to really tracking all of my meals. I’ll do this again for a few weeks, but it usually only takes a couple of days for it to feel routine again to me. I’ve also found that I tend to be more lax with my tracking on weekends, especially if I know we’re going to be ordering out, etc. On those kinds of days, I do my best to front load my day with more veggies and protein, since whatever meal we may be ordering out will likely have more fats and carbs. But really, I try not to sweat it because, in the end, it all usually winds up balancing out! 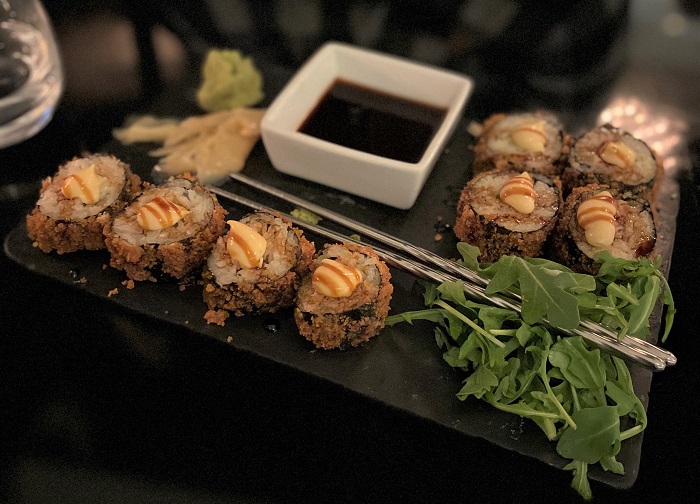 Emily: I have clients that do exactly what Courtney does: seasons of their life where it feels great to track and hit macros diligently and seasons of their life where it feels better to take a break from tracking. What Courtney learned during her time spent tracking, however, has stayed with her and shaped her “default” habits for the better. In other words, she’s not forgetting the importance of balanced, protein-rich meals when she’s not tracking; she’s not drinking multiple DD’s a day or going overboard with her desserts just because she doesn’t plug it into an app. Courtney, just like my other clients, have learned so much about what their bodies needs on a regular basis that their default habits are forever changed even with a short period of time spent tracking.

What are you doing with your macros right now?

Courtney: Well, before all of this quarantine stuff happened, I was ready to commit to tracking again! I had worked with Emily a bit and she helped me determine that it was time for me to actually increase my macros (the numbers I had previously were designed as more of a deficit, but because I’m not looking to cut calories, I was in need of something designed for more of a maintenance).

All that said, this quarantine has sort of thrown me for a loop, and I’ve really let my eating habits get quite lax. I’ve allowed myself a couple of weeks to just do whatever, because I was honestly just trying to focus all of my attention on everything else. Case in point… 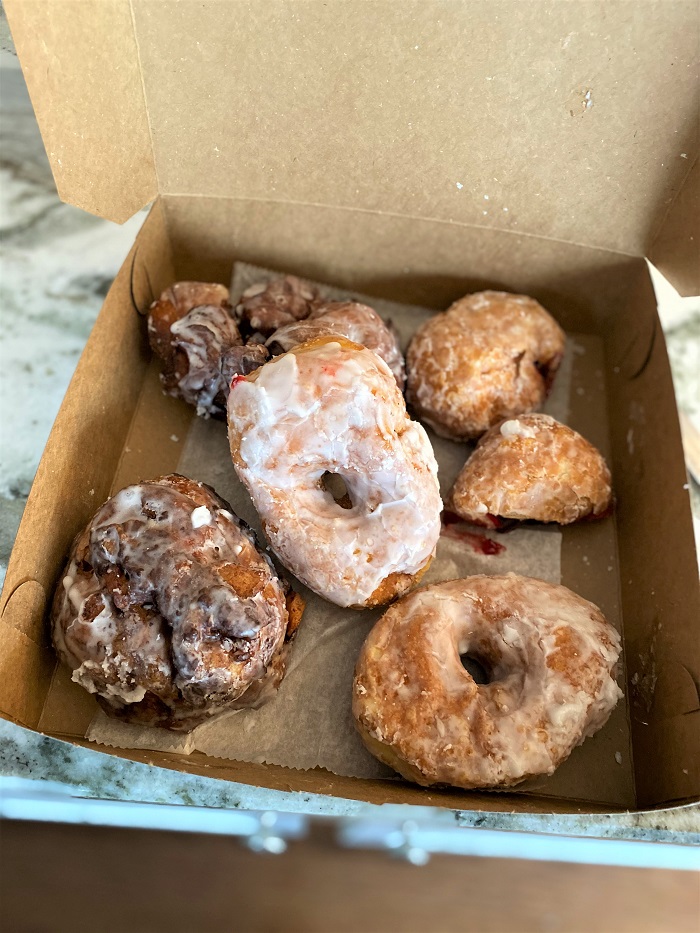 But knowing that I do tend to feel THAT much better when I am tracking, it’s my goal to try and get back to it soon!

Emily: I’ll be excited to see Courtney come back to tracking when she’s ready. She’s got big goals for strength and lean muscle gain – which takes time! She’s got to eat enough to support her goals and tracking will help ensure that she is doing just that.

Hopefully you guys enjoyed getting a little more insight into my thoughts on macro tracking and how I approach it! Next up in my series with Emily, she’ll be taking a look at one of my “What I Eat in a Day” type posts and giving me her (honest) feedback. So stay turned for that next week!