Wishing you a happy and healthy 2012! 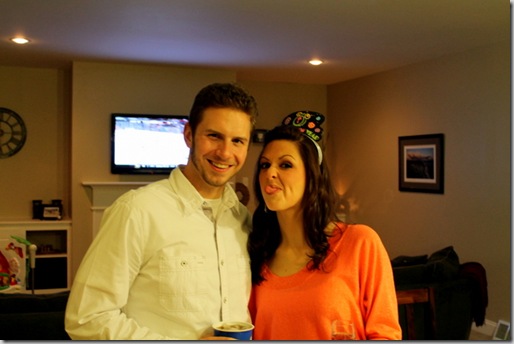 Our New Year’s Eve began with a couple beverages and great friends. 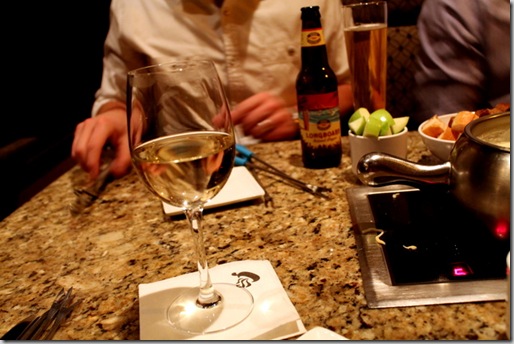 Jeff, Sarah, Brian, Mal, Jay, and myself enjoyed a delicious NYE dinner at The Melting Pot. 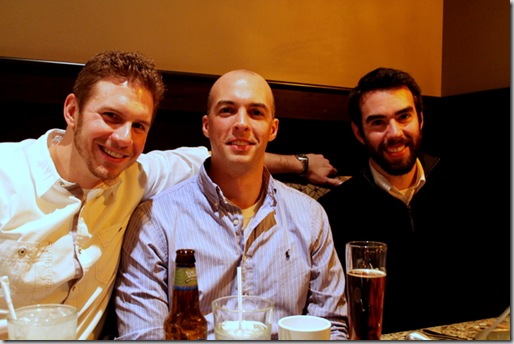 Jeff & Sarah had never been, and you may remember that Jay and I went for our first time exactly a year ago with Brian & Mal. 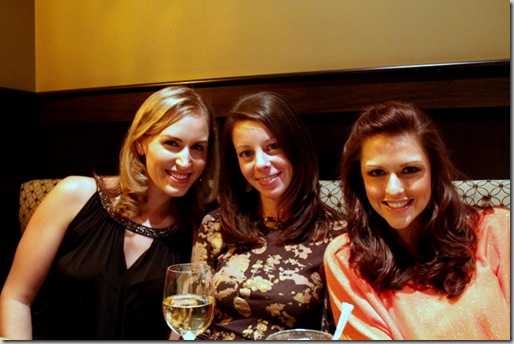 Since it was NYE and all, we decided to go big and all ordered the Four Course Classic. We came with hungry bellies, so we were ready! 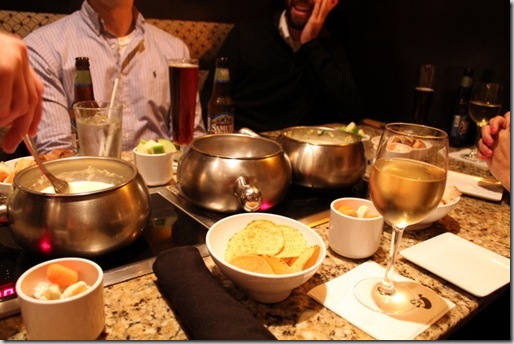 We all ended up ordering a different cheese, so we had three to choose from. 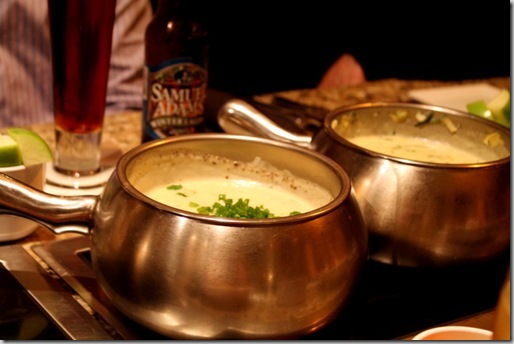 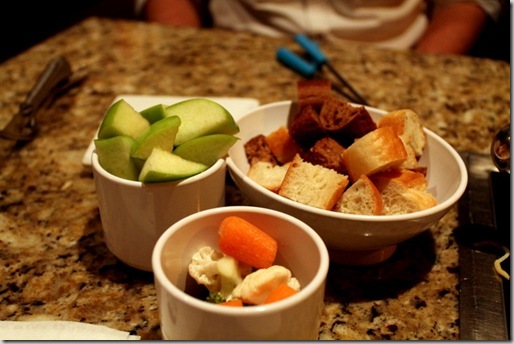 I think my favorite out of all three cheese fondues was the Spinach Artichoke, but I will say that the Traditional Swiss was pretty darn fantastic when paired with the apples. 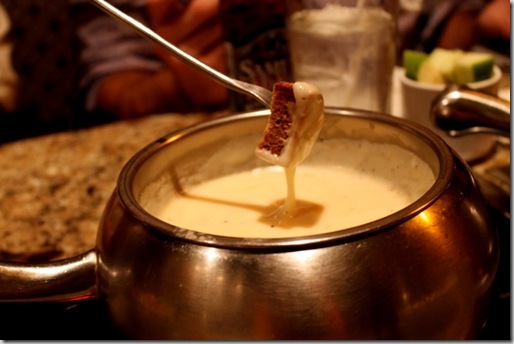 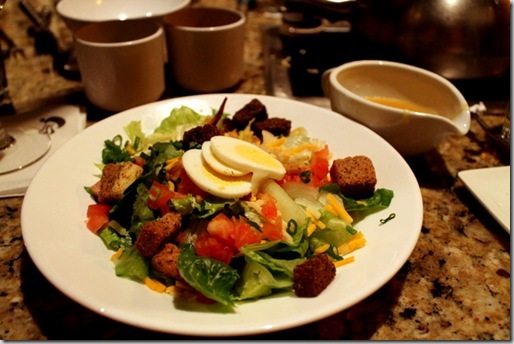 I ordered the House Salad with their sweet and tangy dressing on the side. It was pretty simple, but the dressing was great.

A lot of people don’t realize that you actually cook your own meat, which I think is pretty cool. 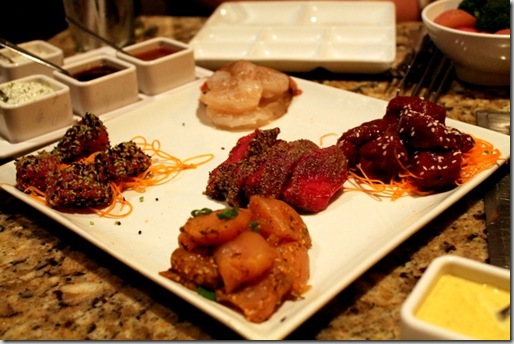 We chose to cook ours in vegetable broth (rather than canola oil) and every single option totally blew me away. They were SO full of flavor! I think my favorite may have been the Sesame-Crusted Sushi-Grade Ahi Tuna. Lucky for me, it wasn’t Jay’s favorite.

By far, my favorite course of the evening. 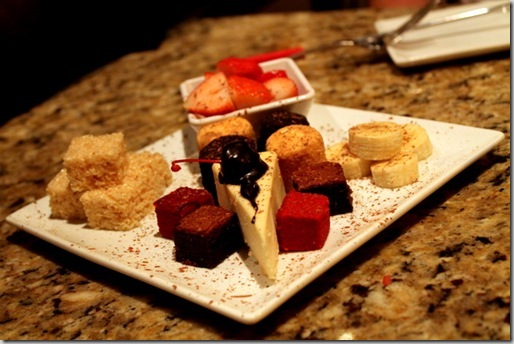 Jay and I went with the Flaming Turtle (milk chocolate, caramel and chopped pecans flambéed tableside), which is the same thing we got last time. 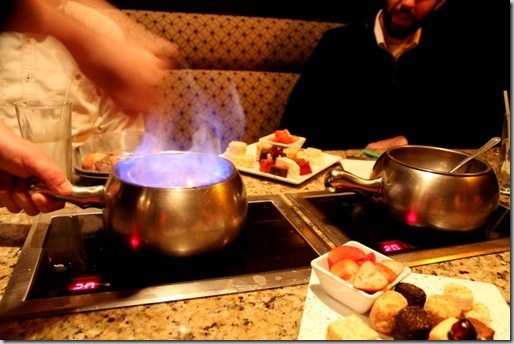 Thankfully, they actually remembered the pecans this time, which were no doubt my favorite part of the fondue. 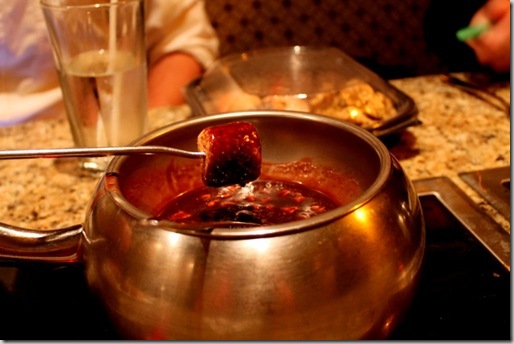 (P.S. – I got such a kick out of comparing the photos from our first visit to last night’s – it’s amazing what a difference this camera makes. I am in LOVE!)

One of the things I love about The Melting Pot is that it’s not just a dinner, it’s more like a total experience. We had dinner reservations at 6:15 and didn’t end up leaving the restaurant until 10:00pm. Plus, since everything is so spread out, I didn’t feel at all stuffed or uncomfortable by the time we left. It was great!

After dinner, we headed over to our friends’ Brook & Andrea’s house and enjoyed a few laughs and a few cocktails. 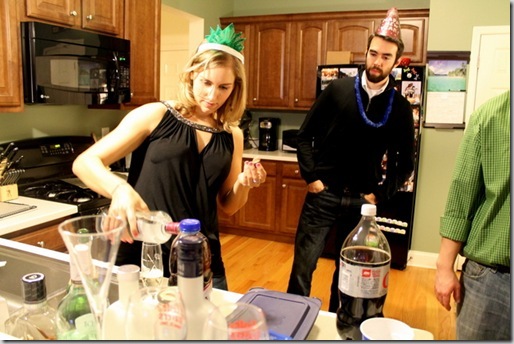 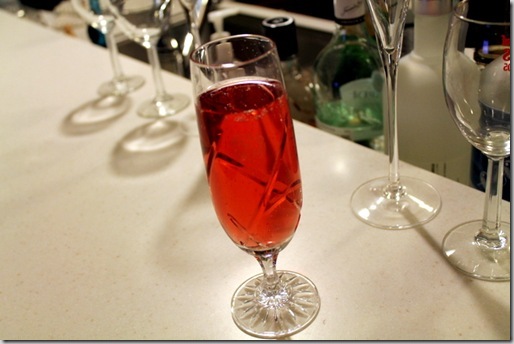 After that, the camera ended up getting put away, but the fun lasted after the ball dropped and well into the evening. I didn’t end up going to bed until 4am last night and I honestly can’t even tell you guys when the last time was that had happened. Crazy!

How did you ring in the New Year?

Speaking of which…do you say “ring in” or “bring in?” I never know!

« 8 Minute Tabata Workout
Give It A Try »