Boy, I’ll tell ya…this morning has been one of those mornings where I *really* need to keep looking for those little things. Technology and I are not exactly the best of friends so far today, so if you are actually reading this post, then that means we’re at least making progress. That being said, here’s the post that was supposed to go up this morning…only I had to re-type it and lost some of my photos from this morning, so it’s slightly different. Ok, here we go!

Do you ever have those days where there is absolutely no workout that sounds appealing to you? Man, they are the pits!

This morning when I woke up, there really wasn’t anything in particular that came to mind, but I figured once I got dressed and started movin’, I’d eventually find my mojo…but no such luck.

I started and stopped two different videos from Exercise on Demand before finally deciding on these two:

I made it through these workouts fine, but I really wasn’t enjoying them like I usually do, which was sort f strange. Either way, I had already known that I wanted to incorporate some yoga today because HOLY MOLY are my muscles tight. Adding a second (or third) day of yoga every week wouldn’t be a bad idea, so hopefully I can get my act together and do that.

Actually, I was just recently sent a copy of this Yoga Bootcamp from Exercise TV to try out, so maybe I’ll give a few of these videos a go. Has anyone else tried any of these? 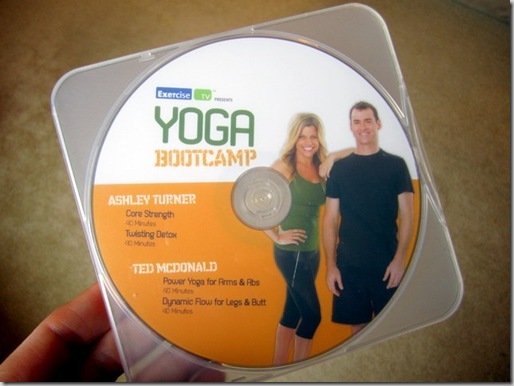 I know I’ve seen them available on Demand, but just haven’t checked them out yet. From the looks of it, it appears as though this DVD series has a 28-Day Plan similar to the 10lb. Slimdown Xtreme that I just finished up, but much less intense. I don’t think I’ll be committing to any challenges at the moment, but I’ll definitely give some of them a try!

Are you sick of looking at eggs and pumpkin gingerbread yet? 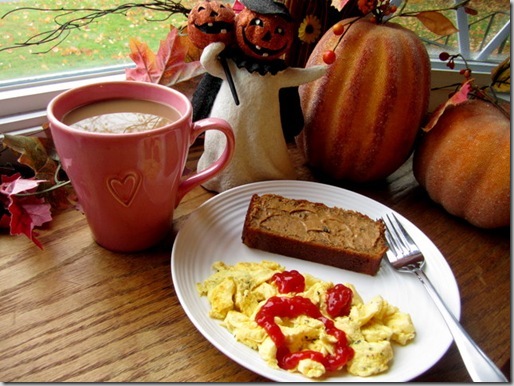 Well, sorry ’bout that, because I still have about 1/4 loaf of bread left, and I’m still just as much in love was I was a few days ago. Especially when it’s topped with cinnamon raisin peanut butter. 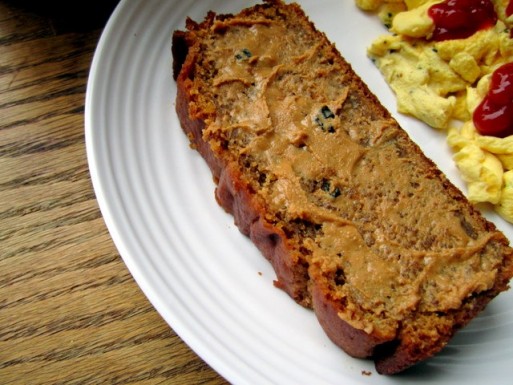 I give it until Friday before it’s demolished.

*Did you guys happen to notice today’s ketchup face? Originally, it was a scared face, but I think after my morning, it’s a good way of represetnting my feelings towards technology at the moment. Sheesh!

Alright, thanks for letting me vent a little bit about my technological issues today. Hey, sometimes we can’t win ’em all, right? Luckily, one little positive in my morning came in the form of a nice, hot hazelnut coffee from Dunkin’ Donuts. So I guess it hasn’t been allll bad. ;)

Do you incorporate yoga into your workout routine? If so, how often do you practice?

When was your last “run-in” with technology?

« The Littlest of Things
A Fun Video! »