Thanks for stopping by! Be sure to check out the Pregnancy & Babies Page for more pregnancy-related updates and week-by-week updates!

In case you missed me gushing over it yesterday, yesterday was an absolutely great day. We had our 12 week prenatal appointment, and I was thrilled to leave that appointment knowing that Baby Tooth was looking “perfect” according to both my doctor and the ultrasound tech.

(*There are ultrasound pics ahead, so if they aren’t your thing, feel free to pass on this post!)

The appointment itself lasted a bit longer than I expected – almost an hour and a half – including a thorough ultrasound (also known as an NT scan), a check up on the ol’ lady parts, and blood work.

First up was the ultrasound, which was awesome because it was definitely the one thing I was most looking forward to. Almost immediately after Baby Tooth was up on the screen, he/she started giving us a show! For one, it seriously looked like he/she was waving to us. No joke! The arm was above its head waving back and forth, almost as if he/she was saying “Hi mom and dad! Here I am!” My heart immediately melted. 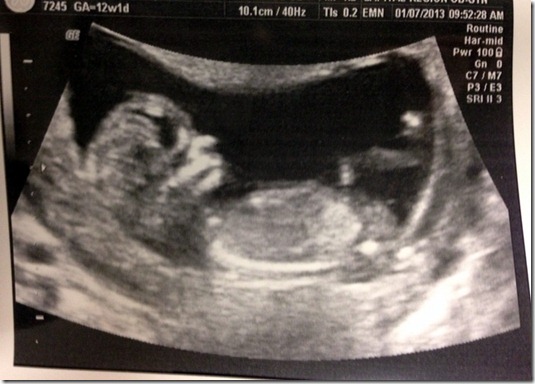 It’s so crazy to believe that four weeks ago, Baby Tooth looked like this… 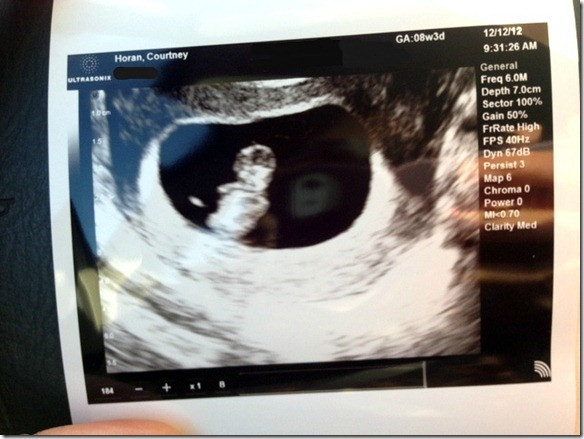 It just boggles my mind that so much can happen in such a short amount of time. It really is just crazy.

So the 12 week appointment began the first part of the genetic screening tests that can be done. Jay and I both discussed what we did and didn’t want to have ahead of time, and we ultimately decided on just doing the NT scan and the blood work.

The NT scan is a non-invasive ultrasound, which helps assess the baby’s risk of having complications such as Down syndrome (DS), other chromosomal abnormalities, and major congenital heart problems. It does this by measuring the clear (translucent) space in the tissue at the back of the baby’s neck, and according to our OB/GYN, Baby Tooth looked “perfect” in that department.

During the ultrasound, Baby Tooth was EXTREMELY active. I mean, I knew they moved around a bit, but our little one was having his/her own little dance party up in there. He/she was using their little legs to push off the sides of the uterus and was ALL over the place. The tech said on more than one occasion that he/she “looks like a handful” and that “it looks like we have our work cut out for us!” Of course, we were all joking around, but it kept the mood light and kept me beaming from ear to ear.

We also got to hear the heart beat, which was at a solid, 150 beats per minute.

As the tech continued to try to get Baby Tooth to calm down for her to get her scans, we got quite a few fun pictures along the way. I have no idea if this is something that is done everywhere, but my OB/GYN’s office gives a CD with all of the ultrasound pics on it, as well as hard copies. 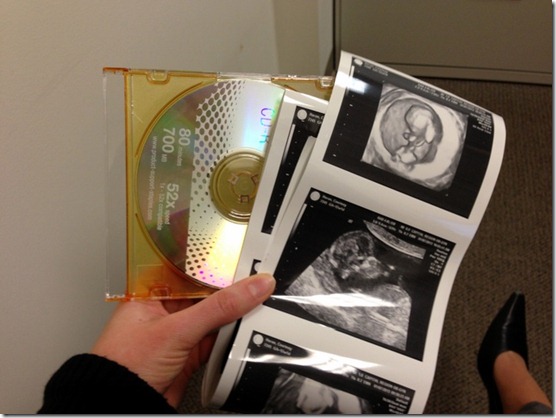 Each time I go back, I get to bring the CD and they’ll add the new photos so I’ll always have a digital copy. I just love that!

So a few of the photos that the tech took utilized the 4D technology which was absolutely surreal. It’s definitely a weird looking view of the little one, but it’s just so amazing.

At one point, all three of us were literally cracking up in the room because it appeared as if Baby Tooth was striking a pose for us… 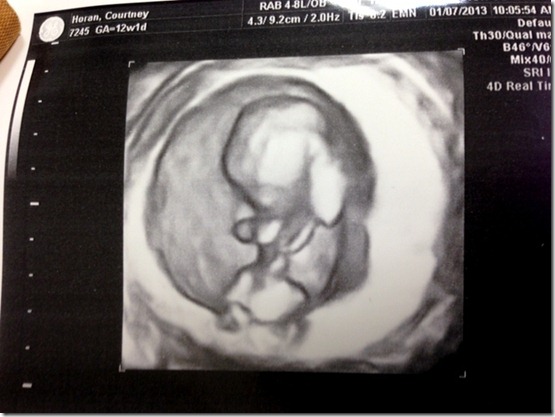 It might be sort of hard to make out, but Baby Tooth has his/her left hand up behind its head, and the right hand up to its mouth (possibly sucking its thumb). We were all loving making jokes about how he/she was being such a ham for the camera for us.

After the ultrasound, I had a quick follow up with the doctor (where I found out the due date got moved up to July 19th) and then finished up with some blood work. Some of the blood work tests that are offered are completely optional (such as those that test for cystic fibrosis and Tay-Sachs), but in the end, Jay and I decided to just do the full workup. We probably won’t hear anything back on this for a while, since I’ll need to do the second part of the screen at my next visit next month, but we both had a good feeling about it.

So that’s that! Our next appointment is at 16 weeks, so I’ve got another month to wait before I get to see little Baby Tooth’s dance moves…

I’m already counting down the days.

« A Great Day
A Little Treasure »