Before we get to any details from last night, I thought I’d mention that yes, STSL does have a slightly different look this morning. After much consideration, I recently decided to switch ad networks so I am no longer with Foodbuzz, and now a proud member of Glam Media. I’m really looking forward to working with them, and I think it will be a great partnership. With the change, however, there were a few layout odds and ends that needed to be changed around (hence the slightly different look in appearance) and my blog guru Ryan took care of those last night. Other than that, there shouldn’t be any other changes popping up on your end!

So now…let’s get back to last night, shall we? Shortly afterwalking in the door from work yesterday evening, I was greeted by this absolutely beautiful bouquet of roses.

Gorgeous right? And the best part about them was that I wasn’t even expecting them, making them even more special. 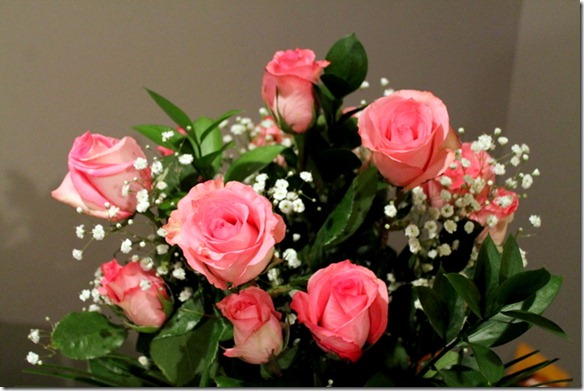 With the exception of our first year anniversary gifts, we’ve never really gotten into the whole gift exchanging thing. Probably because it’s so close to Christmas, but it’s really not a big deal to either of us; I’m just happy to be able to spend time with him (cue gushy sappy “awwww…”). However, the roses were definitely a welcomed surprise. :) 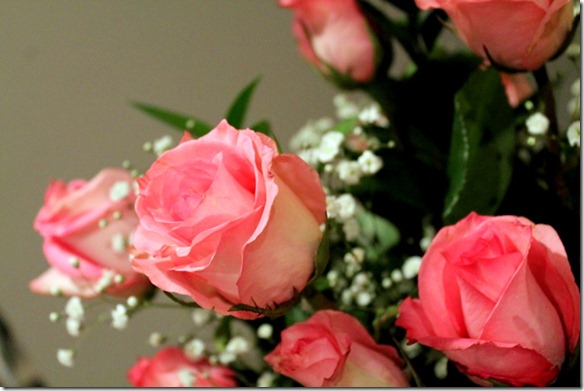 So even though Jay and I never really get into the gift giving part of our anniversary, my in-laws certainly do. And I’ll tell ya…they are quite clever when it comes to their gift giving.

So the third anniversary is apparently the “leather” anniversary. Jay and I joked around about what we’d buy if we were to go with the leather theme, and I can’t lie…a$$less chaps may have come up once or twice. ;) 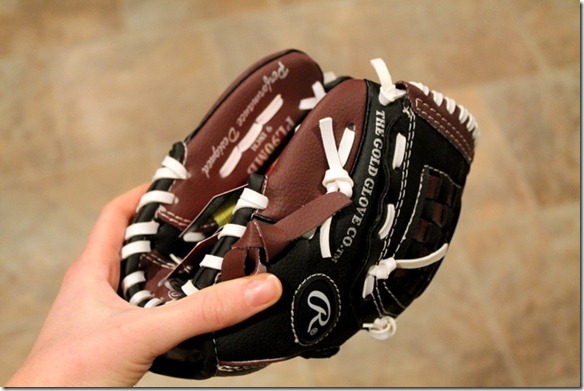 A mini baseball/softball glove for our future “little slugger.” I mean, how cute is that, right? 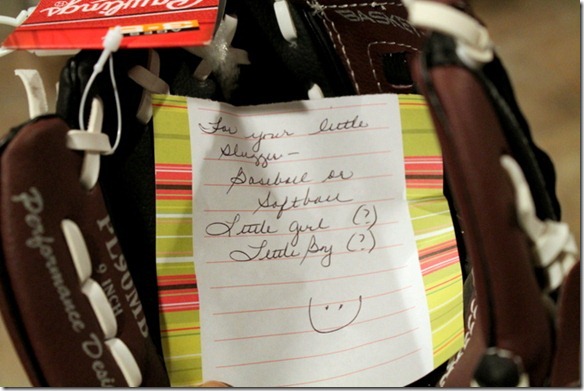 I had to laugh because I immediately noticed that the glove was for a lefty (Jay is left-handed for softball…ambidextrous in life, but anyway) but when we called to thank them, we found out that they apparently also have a righty glove for backup.

We also got a very generous gift card for dinner at the same place we got married (and went on our first anniversary) so we will certainly be using that soon.

So a little while later, we were out the door and off to our dinner reservations at D’Raymonds. 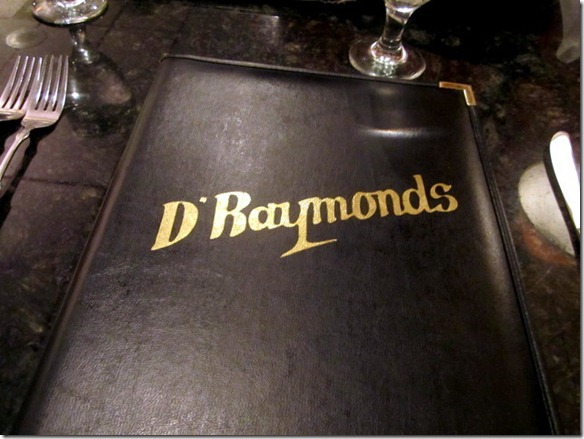 D’Raymonds is a small, local Italian restaurant that Jay and I hadn’t been to since May 2008. Their food is incredible, but it’s one of those places we really like saving for special occasions.

Of course, both of us were checking out the menu online way before we even got to dinner, and we both agreed that we definitely had to start out with their bruschetta. 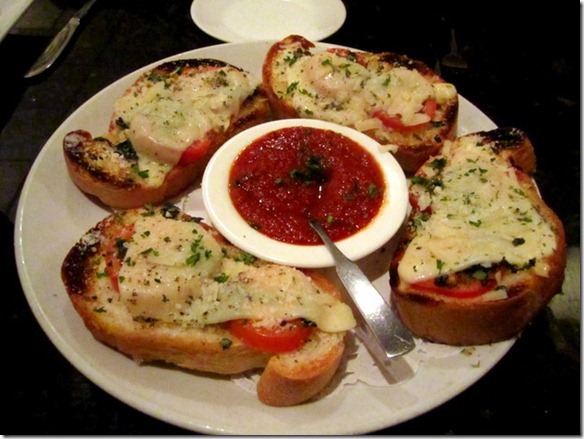 Okay, so this bruschetta? Quite possibly the best I’ve ever had. I’m not kidding. It was SO full of flavor, with lots of buttery garlic underneath the tomatoes and cheese. Jay said said that we should try to recreate it at home, but I told him that it wouldn’t be nearly as good because I wouldn’t dare to use as much better as they probably do. ;) 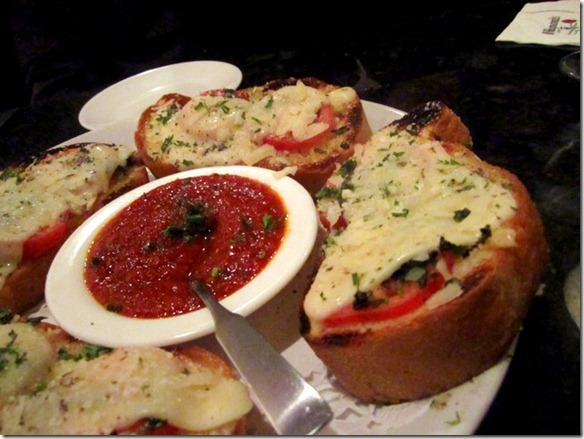 We also got some bread and dipping butters/sauces for the table, including a roasted red pepper dip, homemade garlic butter, and olive oil + balsamic. I only had a small piece of bread, but that’s because I still needed to try all three of them. 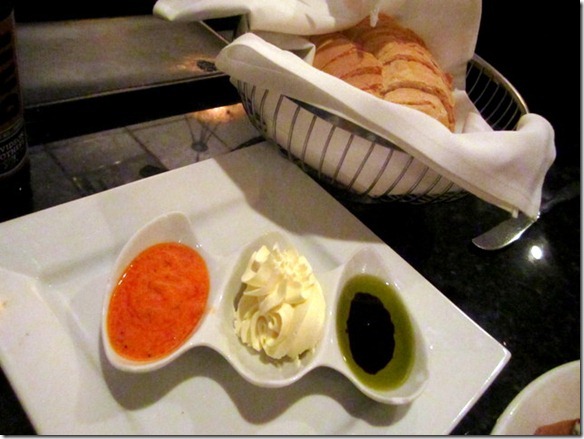 I think the roasted red pepper dip was my favorite. Definitely unique!

Shortly after the bread came out, we also got a random plate of what appeared to be fried dough. We were surprised to have gotten it before our meal even came, so we didnt’ really do much with it until after we were done with dinner. 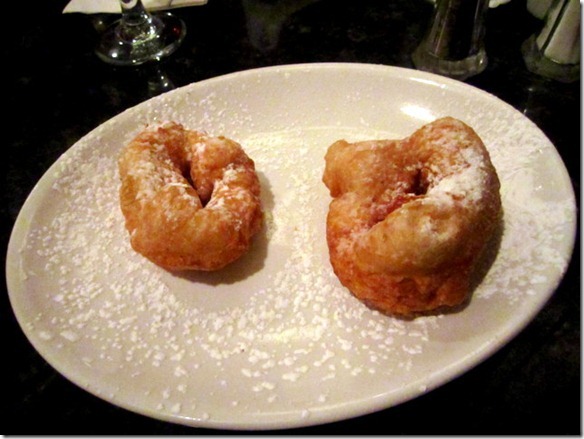 We each tried a bite and it was, indeed, fried dough which was quite delicious. I can’t even remember the last time I had fried dough?

So, believe it or not, with all the food that was already brought to our table, we still hadn’t even had our entrees. Luckily, neither of us went crazy with the apps (and we went prepared to eat) so we were more than ready for the good stuff. 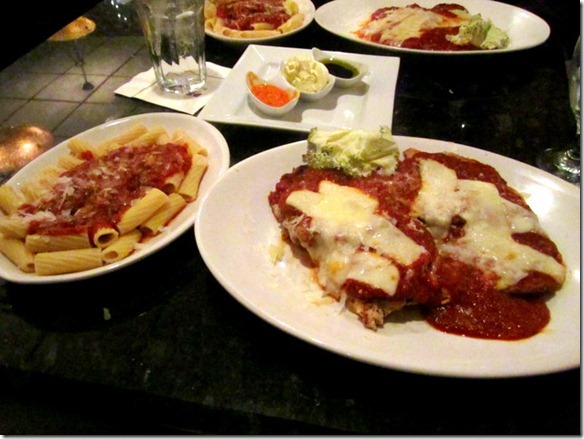 For my meal, I ordered the chicken sorrento, which also came with a side of pasta, but was able to substitute grilled chicken instead of the breaded and fried (the eggplant was already fried and too much fried food doesn’t sit too well with me these days). 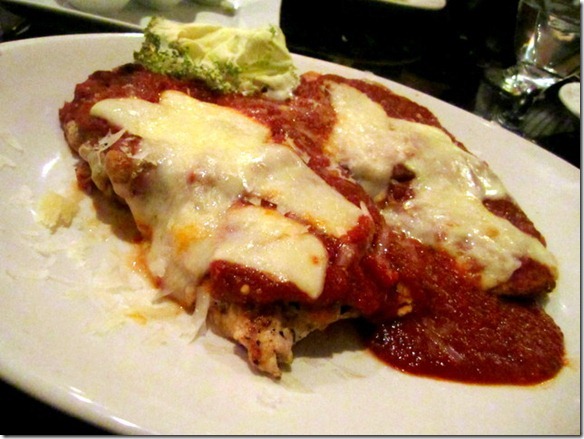 The dish was absolutely delicious, but knowing full well that I wanted to save room for dessert, I made sure to go easy on the portions. The good news is that Jay and I both basically have a full dinner of leftovers for tonight – can’t beat that! 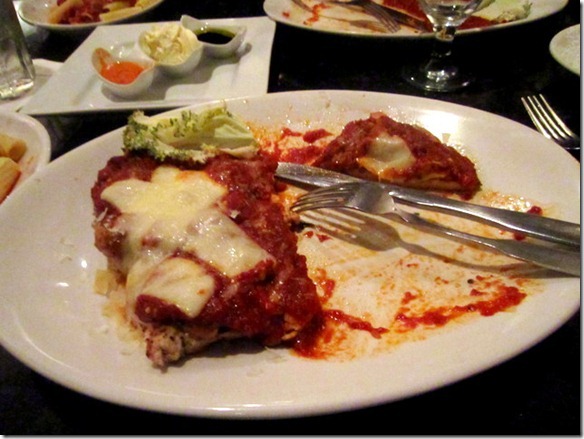 When it came time for dessert, I was really craving something chocolate and was hoping I’d find something in that category, but our waitress totally sold us on their carrot cake cheesecake dessert. All I can say is, I’m SO glad that she did. 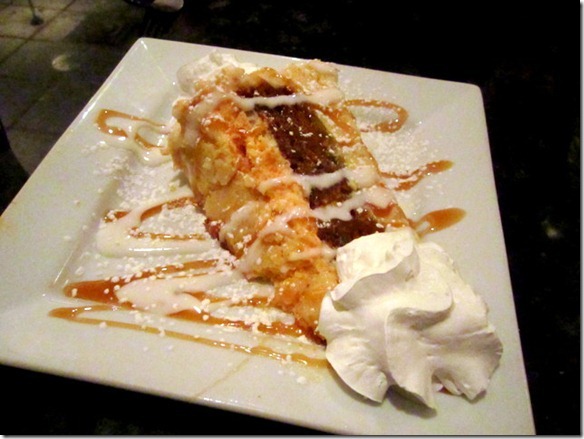 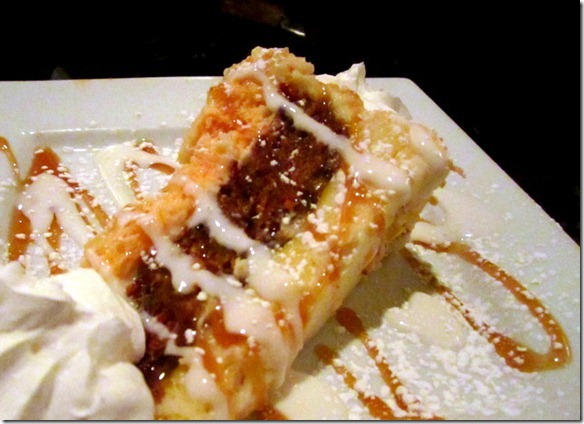 One of the best desserts I’ve had in a long time. Actually, probably one of the tops…however that incredible chocolate cake from over the summer is still proudly sitting at #1. Man, that thing was crazy good.

By the time we were done with our meals, we were both equally stuffed so we headed home in were in bed not long after. The only thing I had hoped to do was watch a little bit of our wedding video, but since it was late and I was tired, I just watched a few of my favorite clips from this post. It was a wonderful way to spend our anniversary, and I wouldn’t have had it any other way. :)