Did ya check out yesterday’s post yet? If so, then you already know that we spent most of our days being total beach bums, but we did manage to hop in the car and leave the beach/condo a few times!

Places to Visit While in Wildwood, NJ!

Our weather forecast for the entire week we were there was all sun and clouds, with the exception of one day that was showing as “cloudy,” so we figured that might be a good day for Jay and I to break away with the boys and head to the Cape May Zoo for a little visit. 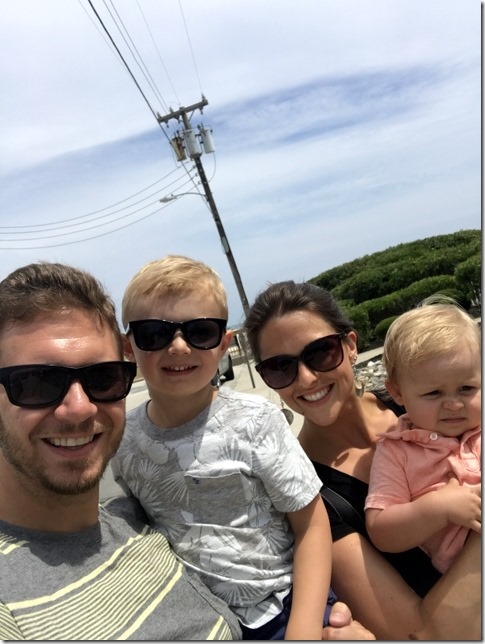 And I will say, if you’re ever planning a visit to Wildwood or the Cape May area, I would definitely recommend checking out the zoo. For starters, it’s FREE. They will accept donations, which we happily did, but there is no charge to visit. Incredible!

We arrived right around lunch time, so we made a quick stop at their little outdoor café for something to eat before walking around and checking out the animals. 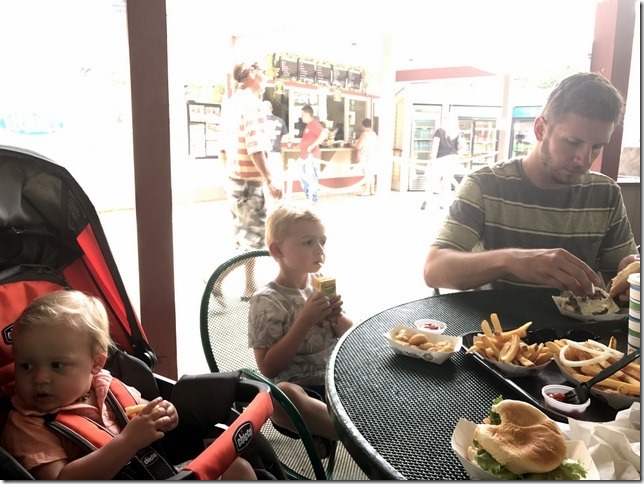 Even though it was a cloudy day, it was still ridiculously muggy and HOT. In case you need further evidence of that, I think Alex’s face says it all. 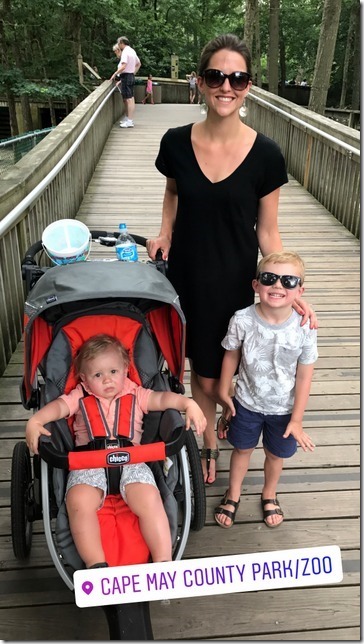 FYI: I had so many questions on where my dress was from – it’s from Gap Outlet (this year) and was on sale for something crazy like $19 I think?? SO comfy, too!

Unfortunately, I think the extra heat and humidity also had some of the animals hiding out and trying to cool off, so we weren’t able to really see some of the ones we were hoping for (like the snow leopard, for one!). But we did still see plenty of others, including bison, lemurs, giraffes, lions, and zebras, just to name a few. 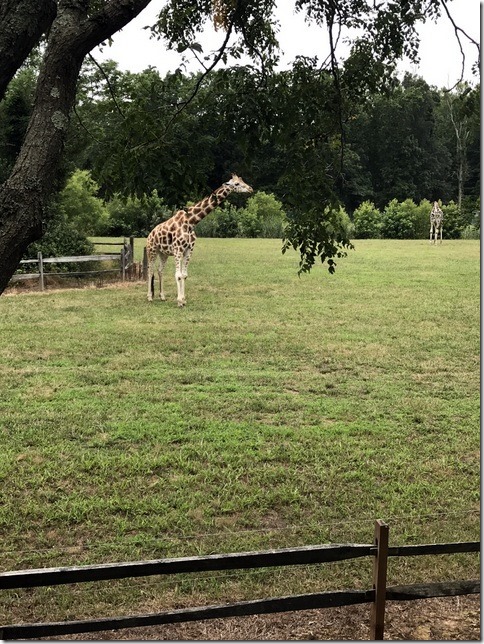 We told Lucas we were in the Lion Guard. ; ) 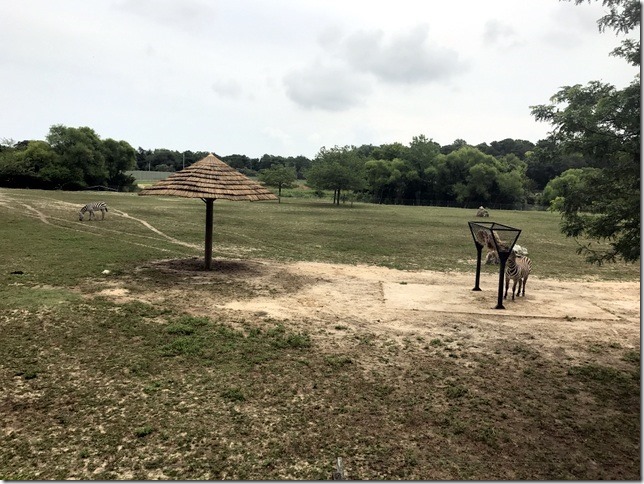 In all honesty, I think Jay and I were more interested in the zoo animals than the boys were (which is totally fine!), and I think the two things that Lucas was most excited about during our trip were 1) the sprinkler heads he found in various places throughout the zoo, and 2) the big playgrounds that are right outside the zoo entrance. 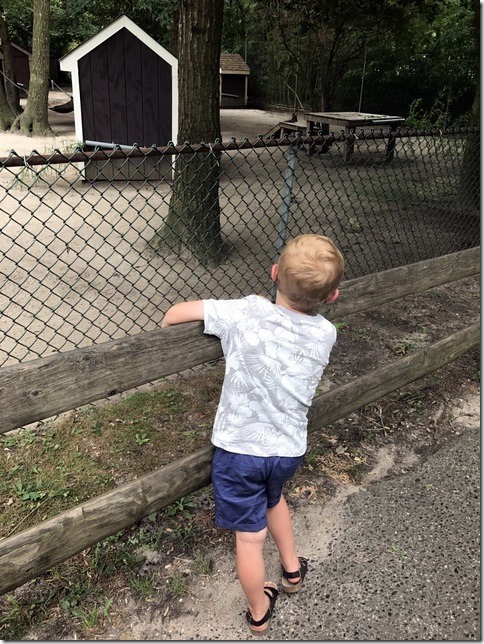 So, of course, after checking out the animals, we grabbed some ice cream and stopped at the playground for some fun before heading back to the condo. 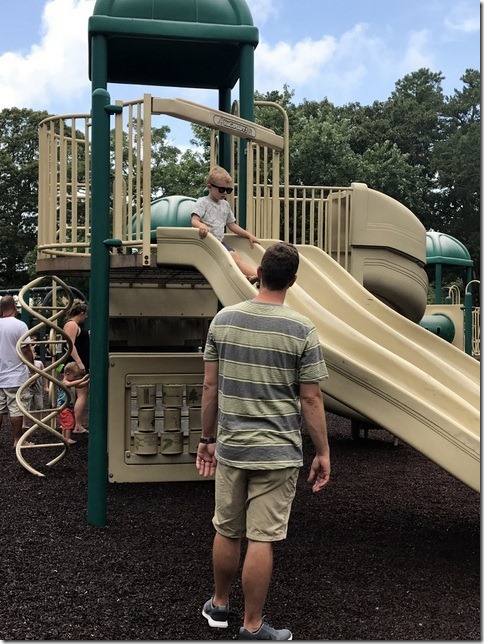 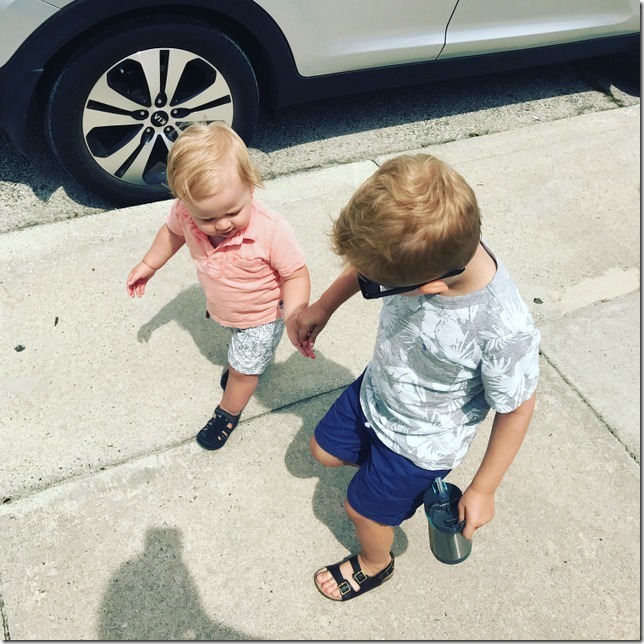 A couple of days later, once both boys were in bed, Jay and I were able to step out and enjoy a little date night back at one of our favorite spots. 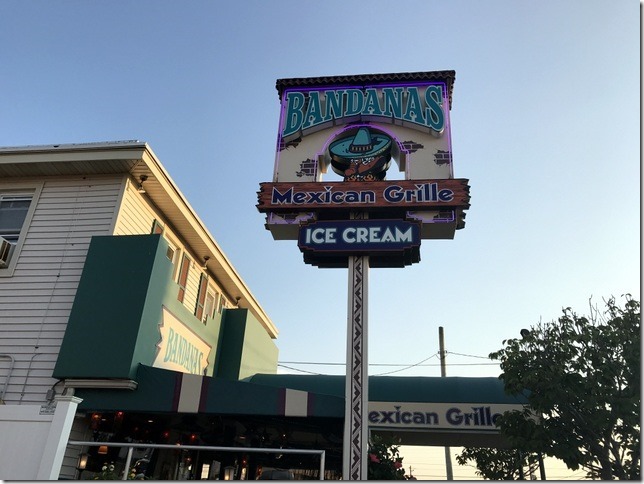 And Bandanas did NOT disappoint! 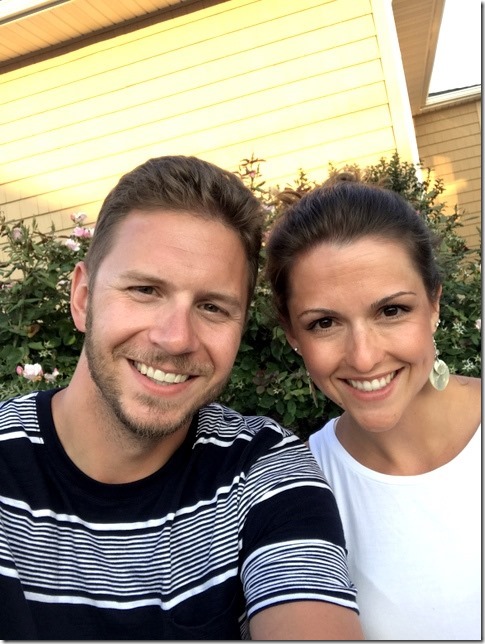 We were able to cut our wait time in about half by opting for a table outside, so that’s exactly what we decided to do…we were hungry! And, thankfully, we were given some chips and salsa to snack on while we browsed the menu. 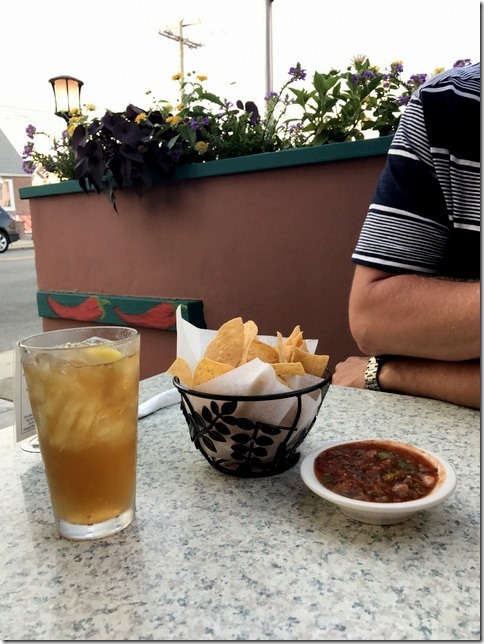 We ended up ordering an appetizer sampler plate, which came with quesadillas, chicken minichangas, guacamole, and the most incredible corn cake. 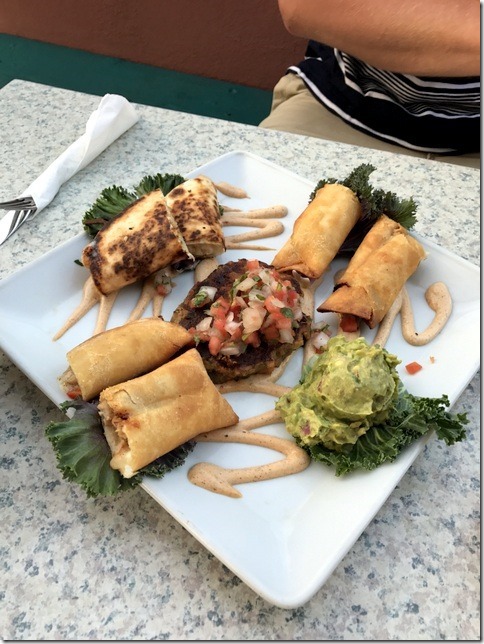 I’ve never tried making corn cakes before but after trying that one, I now know that I need them in my life more often. It was SO good.

And dinner was even better! I ordered the Tequila Tacos, which came with Tequila marinated mahi mahi, avocado, slaw, pineapple-mango salsa, and Mexican crema. 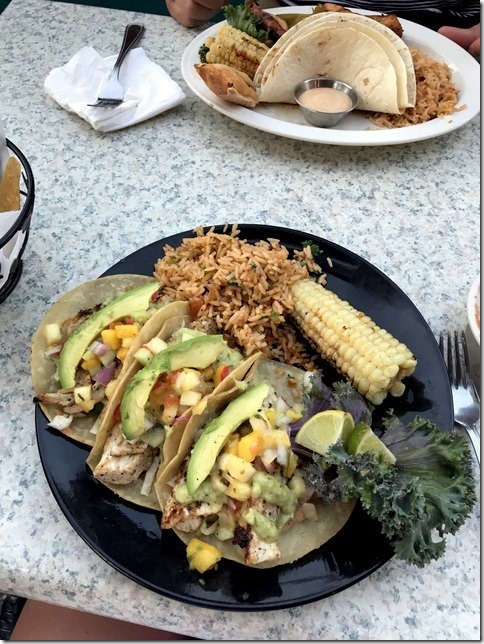 They were so fresh and totally delicious! I probably would have eaten all three of them no problem, but knowing that they have some pretty delicious dessert (including homemade ice cream), I had to make sure to save some room. 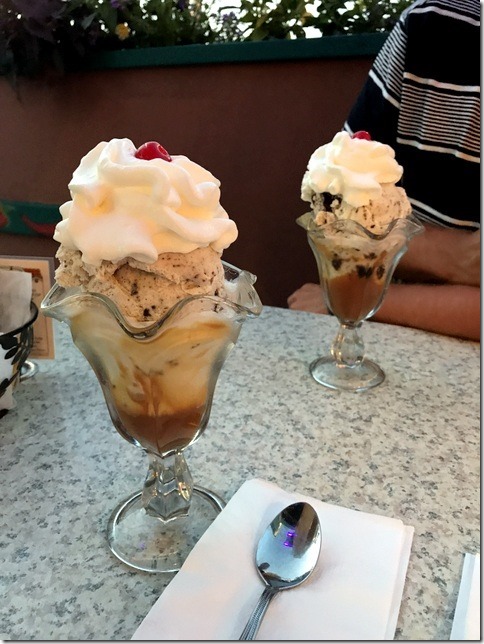 So we both finished up the meal with a couple of caramel sundaes (cookies & cream + cookie dough ice cream flavors for me) that pretty much put me over the edge for the night. Whew! We joked that it was a good thing the didn’t serve alcohol there because we probably would have wound up with a crazy bill AND overly full stomachs. : )

And speaking of overly full…for those of you who have been reading my Wildwood recaps for a few years now, you probably know there was one more spot we had to hit up before leaving… 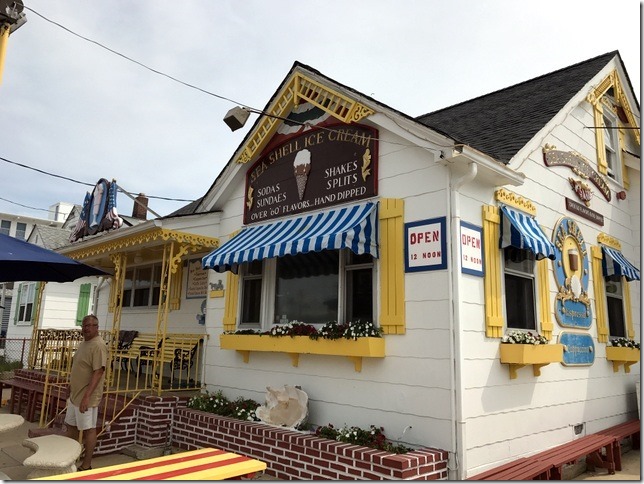 In an attempt to beat a rush (and also because we waited until the day we were leaving to finally go!) we got there around 3pm which was perfect because there was no wait.

So, just as I do every year, I ended up ordering a caramel sundae (this year, with vanilla peanut butter + cookies and cream ice cream flavors). Really, the pictures just do NOT do these sundaes justice. There was easily more like 5-6 actual scoops of ice cream in these thing… 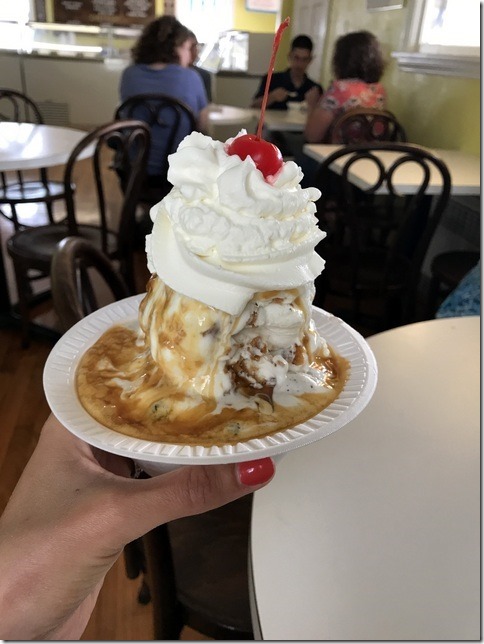 And I’m not ashamed to admit, I finished it all. Gotta live it up on vacation, right?! 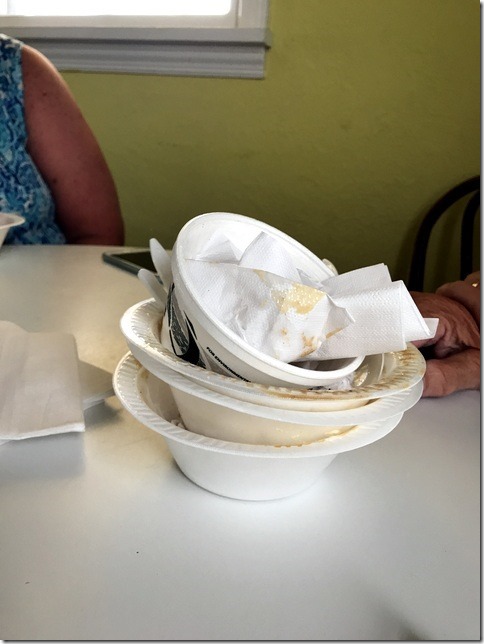 Knowing how big they are, we got one “single scoop” of vanilla for the boys to share which, as you can see, was clearly enough for the two of them. Lucas was getting a kick out of sharing with Alex, and I still get a kick looking at his face in this picture. 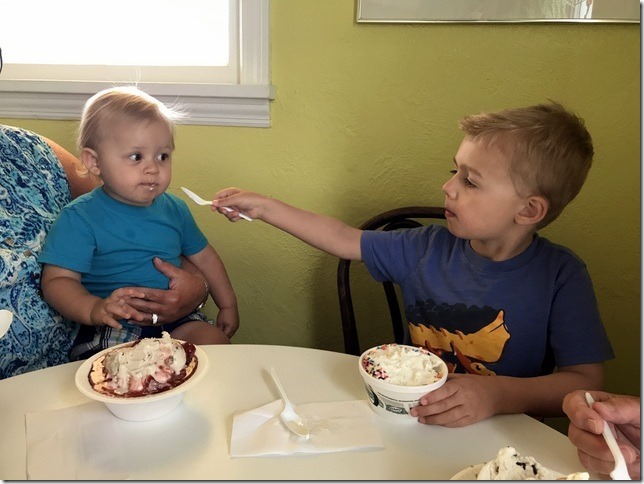 We all left with more than full stomachs, and my parents brought the boys back to the condo while Jay and I made a quick stop at the boardwalk to pick up another Wildwood favorite. 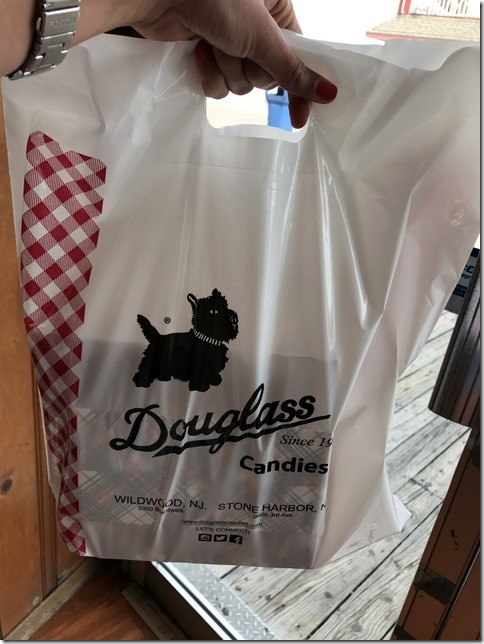 I joked that it was a good thing that I waited to go to Douglass Fudge until after I ate an enormous sundae so that I wouldn’t load up on samples of fudge. So I was able to quickly get in and out with our fudge and we headed back to pack up the crew and head back home! 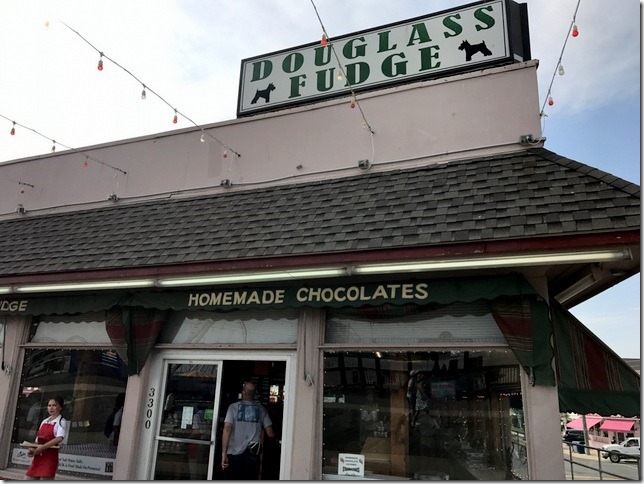 I think this was actually the first year EVER where we didn’t all go to the boardwalk. Honestly, it’s not my favorite part, and it was really tough with the boys being ready for bed so early at night. Thankfully, Lucas didn’t ask about it, so even though I felt slightly guilty for  not getting there, they’re still none the wiser. And then maybe next year, it’ll be easier to get there!

So there’s our full recap of our week away in Wildwood! We had such a great time, and I’m already looking forward to next year…and dreaming about another gigantic sundae. <3

« Our Wildwood Vacation
Lucas Turns 4! {Reflecting on This Past Year} »