I hope everyone has been enjoying their Sunday.  It has been a chilly, gloomy, stormy day here, so we’ve been pretty cooped up most of the day.  I really don’t mind rainy days though…they make it seem so much easier to just relax and do nothing! :)

So let me catch you guys up quick on today…

Breakfast has no pictures because nothing was really blog worthy.  Jay and I stayed at the hotel of the wedding last night, which offered a free continental breakfast.  Unfortunately, nothing was all that exciting, and I think I ended up eating 1/2 of a cinnamon raisin bagel & about 2/3 of a yogurt.  Nothing was all that appealing. :(

HOWEVER, on my way home, I did make a pit stop for a beverage full of appeal…a Skinny Vanilla Latte from Starbucks!  It was absolutely delicious. :-P

Jay and I just kind of hung around the house for a little while and hung out with Cody, who was VERY happy to see us.  The poor little guy was lonely! 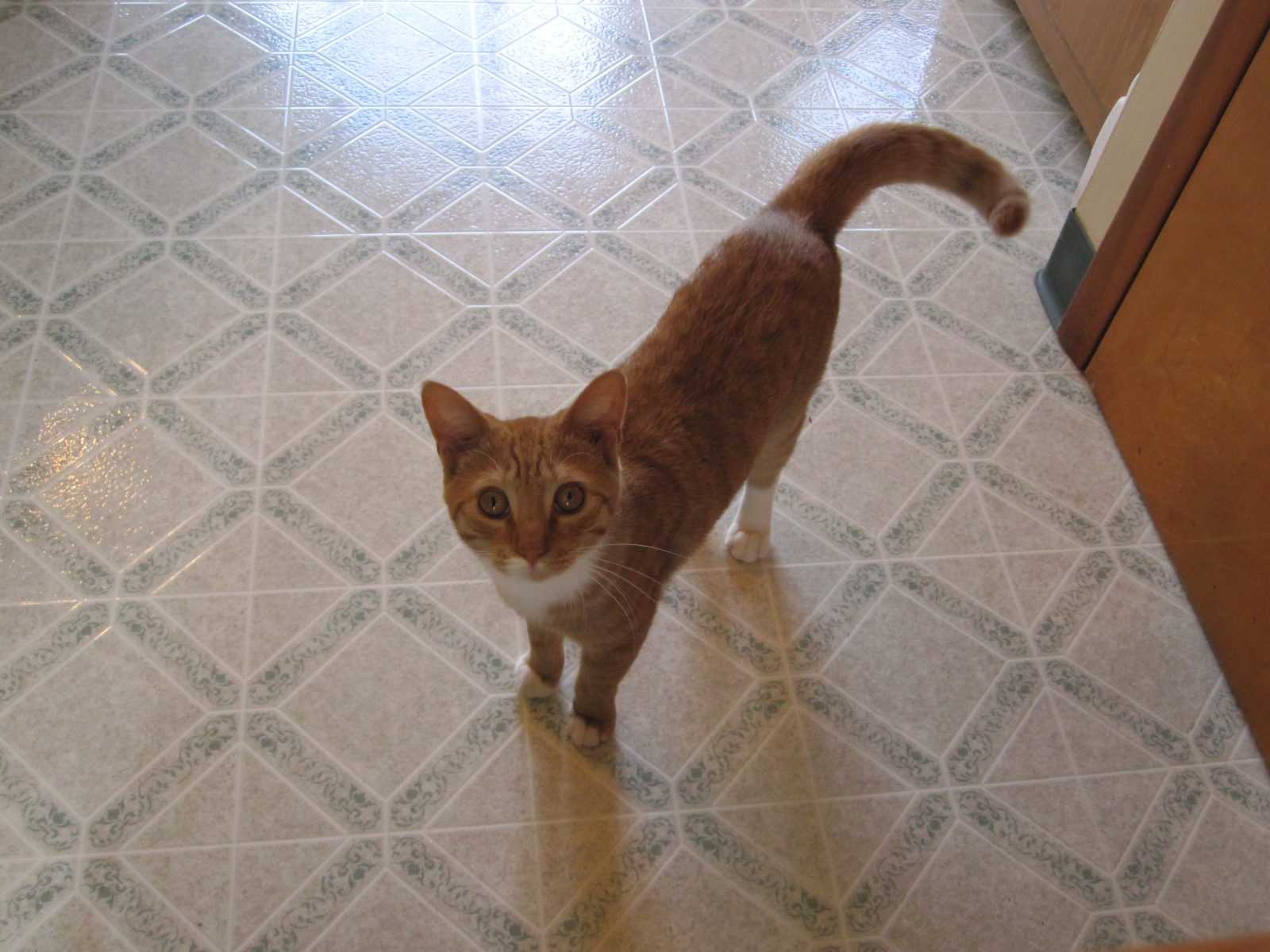 Around 12:30 we both realized we were pretty much starving, so it was time to make some lunch.  I decided to take the opportunity today to try some Kale Chips with my bunch that I bought yesterday.  I tore them into bite-size pieces, drizzled them with a little EVOO, parmesan cheese, and S&P and popped them in a 375 degree oven for about 15 minutes.

The verdict?  They weren’t bad!  I wasn’t totally sold on them, but I think I’d still try them again.  They were certainly easy enough to make!

I also finished up the last of my Chilled Squash and Carrot Soup with some roasted veggies, along with a hunk of my Hearty Oat Loaf smeared with some Maple PB.

My taste buds were totally playing games with me, because as I was eating my lunch, I ended up getting sick of just about everything I had!  I don’t know what it was, but nothing had the appeal I was hoping for…bummer, right?  I still finished up most of it anyways…hate wasting food! ;)

When there was finally a break between storms, I set out to do some grocery shopping for the week.  It was an easy trip since we only have one day this week where we’re going to be home for dinner!  That’s what happens once softball season starts…lots of cookouts at the field. ;)  While I was checking out, I noticed THESE babies staring me right in the face and I was immediately intrigued enough to buy them…

PRETZEL M&M’s!!! I’m saving them for later this evening for Jay and I to share, but I’m definitely psyched about them.  My favorite M&M’s used to be the crispy ones…does anyone else remember them?  I was so bummed when they discontinued them!

Despite being 0 for 2 thus far in the day with meals, I was determined to make tonight’s dinner a winner.  And oh boy was it a winner…this baby was a rockstar!!

This mouthwatering Mexican treat started with a base of romaine, which I topped off with:

-a big scoop of salsa

Guys, I think I may just have a new favorite salad.  This thing was heavenly fiesta in my mouth! :mrgreen:

With dinner, I also cooked up some cornbread and mixed up a little honey butter to top it off with.  I enjoyed a piece with dinner, which was a perfect compliment to my yumm-o salad. ;)

Jay and I are planning a relaxing evening on the couch and probably renting a movie off “On-Demand”.  We just finished previewing a couple, and we’re trying to decide between 500 Days of Summer & Hurt Locker.  Yes, both totally different movies, I know!  We’ll see what we end up deciding, but either way, I know I’ll be enjoying my movie with a handful of Pretzel M&M’s. ;)

In honor of my very different movie genre selections, my question for the night is:

What is your favorite type of movie genre?  Comedy? Action? Drama? Horror?

I’m ALL OVER the place when it comes to movies…I like ’em all!  Usually, I have to be in a certain mood for each of them though. :)