I feel like it’s been a while since we did any sort of fitness talk. It has, right?

Well let’s take a look at what has been going on with me and the world of fitness and exercise these days.

For the most part, I’ve been keeping up with exercise probably about 5x per week. If and when I have the time on weekends, I’ll use the extra time as an opportunity to throw in a bonus workout, or choose one of the longer ones that I enjoy but don’t always have time for on weekday mornings.

Lately, I’ve really just still been doing a mix of T25 and PiYo videos, along with the occasional quick treadmill run or core workout (this one is always a good one!). 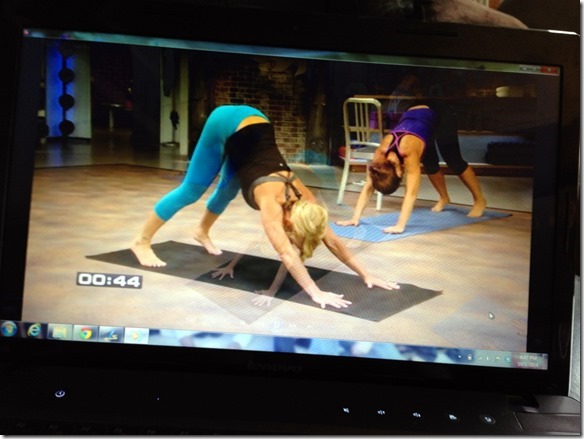 For the most part, the videos still do the trick for me…mainly because I just don’t always have the time or energy in the mornings to try to come up with something on my own. But on the other hand, I’ve noticed myself started to get a little bored with some of them at times and I have a feeling I’m going to need a bit of a change pretty soon. 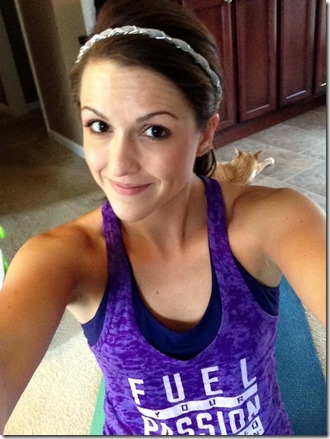 Luckily for me, I was just recently chosen to participate in the Shape & Men’s Fitness FitBit Blogger Challenge through FitFluential, which I think may end up being just the thing to spark my motivation once again and drag me out of my comfort zone a bit.

So…what’s the challenge? Well basically, it works like this: 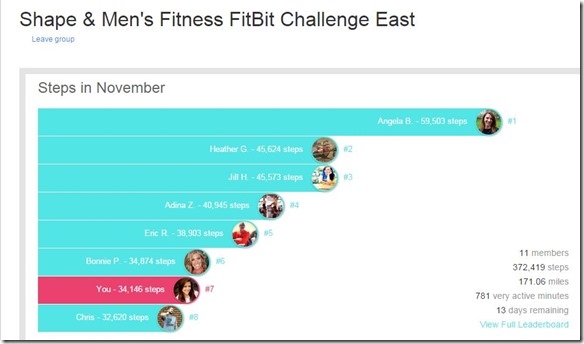 Apparently, I have some crazy active team members!? But hey, it’s cool…I’m also working with a M-F desk job, so keep it up, team!

I received my FitBit Charge last Thursday evening and started using it on Friday, so I have just a few days under my belt so far. As I mentioned above though, my daily average number of steps has been just above 10,000, which really is something I’m totally pleased with. 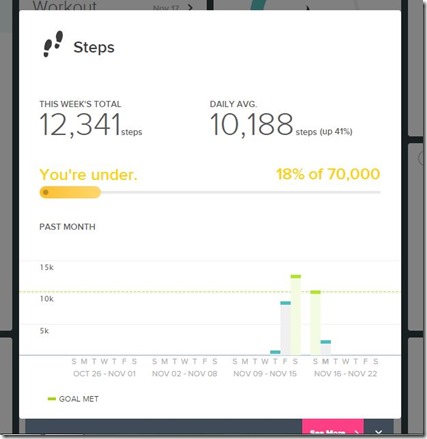 There have even been a few times where I’ve noticed that my steps are just under 10,000 and it has legit gotten me to get off the couch and do a few extra jumping jacks or something whacky just to hit that 10,000 mark. Who knows whether or not that novelty will wear off, but I will say that it has been SUPER motivating to keep moving!

Once you register your FitBit and create your logins, you get a customized dashboard that will sync every few minutes, I believe, when you’re near your computer. And while this challenge is only focusing on Total Steps and Total Distance, it tracks a bunch more.

One of the areas in particular that I was super curious to see more about was my sleep. It will actually show you not only how much sleep you got (which has been really accurate), but it will also track how many times you wake up or were restless during the night. 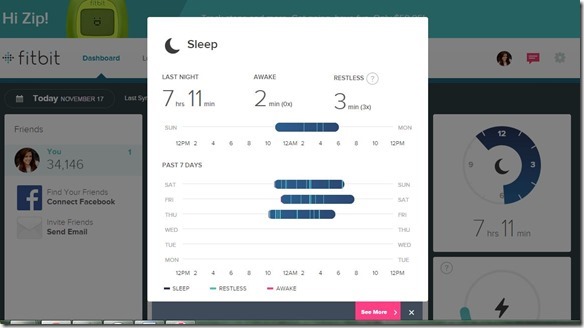 The first night I used it, it showed I was actually restless 13x…and I really felt that the next day, too!

I’m really excited to be participating in this challenge, and I’ve already found myself getting a little competitive at times! So since this is the first week, we were given our challenge back on Monday, and it’s looking like this:

Take your workout outdoors this week and go on a hike or trail run. Soak in the views as you inch closer to the 10K/day goal!

You guys know me…I’m not a trail runner! Or much of an outdoor runner at that, either! But ya know what? I’ve committed to this challenge and I already said I needed something to break me out of my comfort zone a bit. PLUS, let’s not forget…I want my team to win!

Thankfully I have a week to do it, (because I don’t think I’d have any time during the week early in the mornings) so I’m planning on heading out on Saturday to hit the trails. Don’t ask me which ones…I have no freakin’ clue where to look.

If only I could find a trail like that around me…

So yeah, we’ll see how it goes! I’m excited to keep up with the challenges for the next few weeks, and I’ll be documenting my way through them both on the blog and on Instagram. You can see what’s happening by following the hashtags #MotivationalMondays and #FindYourFit, along with @fitbit. And also be sure to check out the scoreboard to follow the teams and enter the weekly sweeps to win your own FitBit Charge!

This post is sponsored by the Shape/Men’s Fitness FitBit Charge Challenge.

« Four Fun Things (About Me!)
A Butthead Monday Move »