Hey friends! Tonight, Jay and I have a softball game under the lights (Oooooo!), so I whipped up a no-fuss dinner before we head out the door. 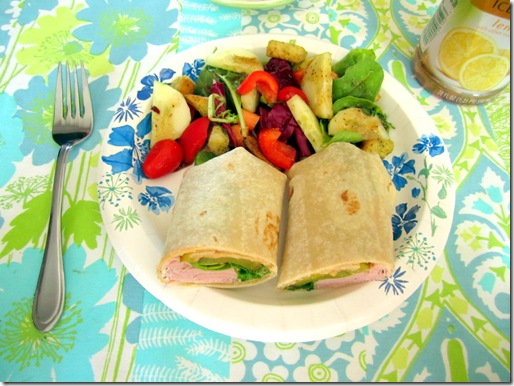 We still have some salad leftover from last night’s dinner, so I portioned out a little of that with a drizzle of balsamic vinaigrette. 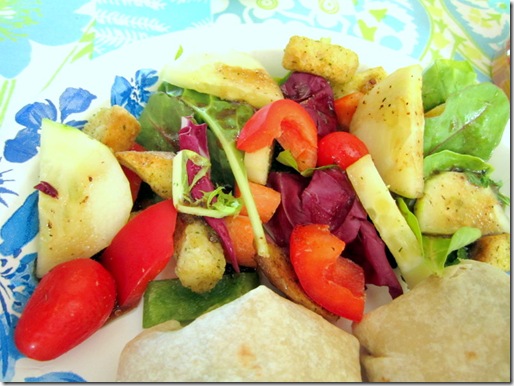 I also made myself a ham & cheese wrap, made with a whole grain La Tortilla Factory wrap, 3 thin slices of deli ham (I know it looks like a lot more than that in the picture), a wedge of The Laughing Cow Light Swiss Cheese, lettuce, bread & butter pickles, and a tiny smear of Gar La La, which totally made the wrap. 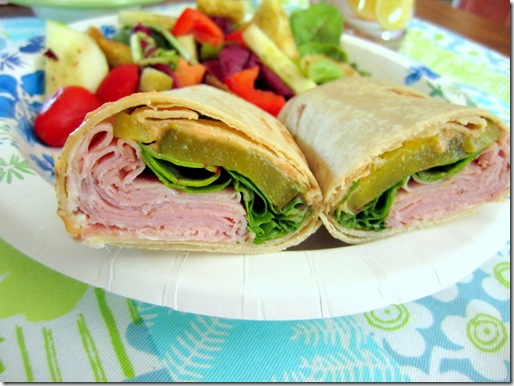 Along with dinner, I sipped on some of this lemon iced tea, which actually brings me to the rest of this post! 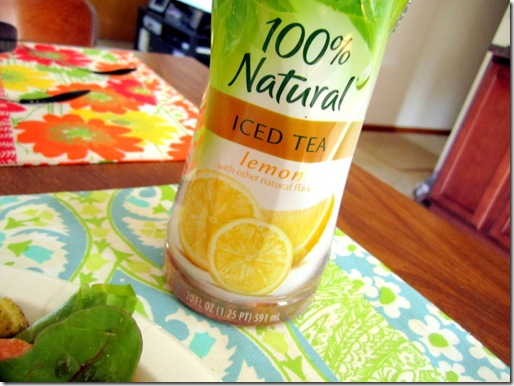 I was recently given the opportunity to review a new line of iced teas from Lipton. 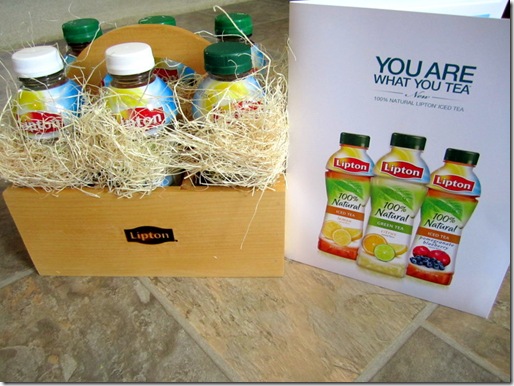 To be honest, it had been quite a while since I’ve had bottled iced teas; when I was in high school, I was completely addicted to diet green iced tea, and probably drank at least one to two bottles a day.

I was a little extreme, no?

So needless to say, iced tea had pretty much worn out its welcome. But, since high school has been over for almost 10 years now (GASP!) I welcomed the opportunity to give the Lipton iced teas a try.

The 100% Natural Lipton Iced Tea line features an all-natural ingredient list, with 50-70 calories per serving, depending on the flavor. It is available in four flavors, including two current and two new: 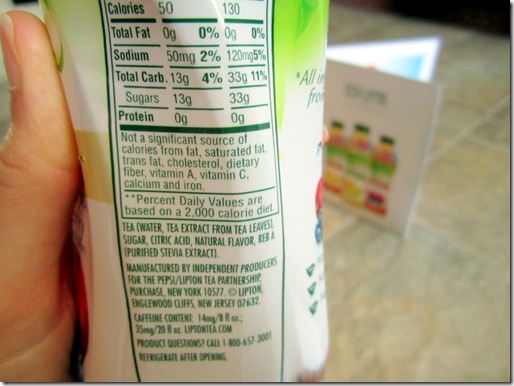 So when I first received my iced teas, I immediately dug into the Diet Green Tea with Watermelon. 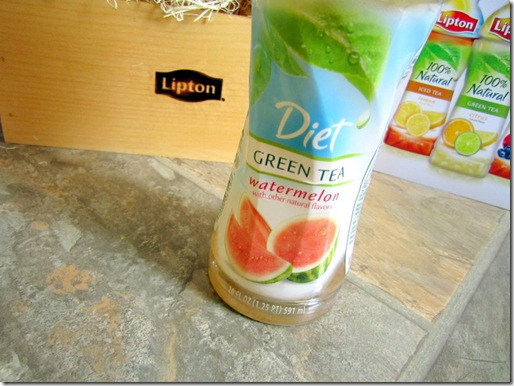 Even though it did have somewhat of a “diet” taste to it, the delicate flavor of green tea paired with just a hint of watermelon was really light and refreshing. It was perfect for sipping outside, which I actually did over the Memorial Day weekend. It was probably my favorite of the diet flavors.

The Diet Green Tea with Citrus was also refreshing, but didn’t offer much of anything different from a regular diet green tea. 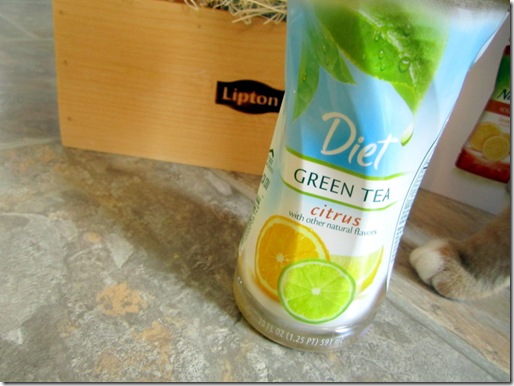 Creeper also wanted in on the action…

Jay and I both took a stab at taste-testing the remaining four flavors that I was sent to try, which we both ended up being in agreement on for most of them: 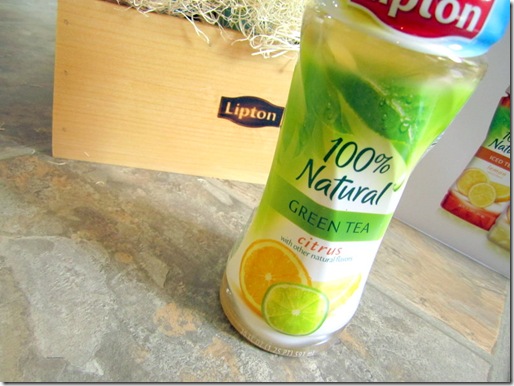 Hints of lemon and citrus, and a bit sweeter from the diet version (obviously). We both liked it but didn’t love it. 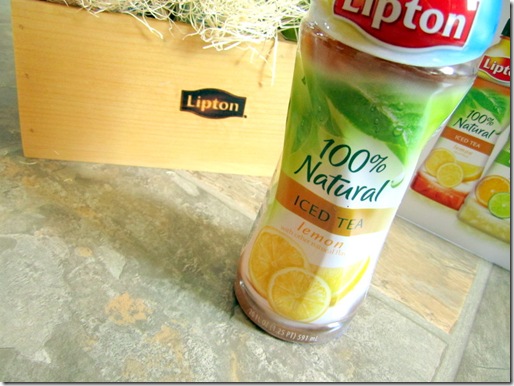 I’ve always been a fan of black tea, so this was another good one. I liked that the lemon was prominent enough but not overpowering. 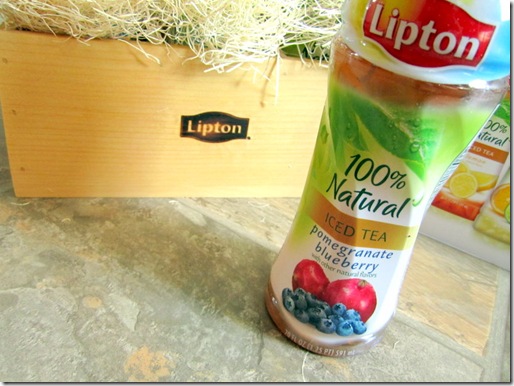 I reeeeally enjoyed the flavors of the blueberry and pomegranate in this tea, but they were probably too sweet for me to enjoy a whole bottle’s worth. That’s probably because I’m so used to drinking diet though, I’m sure. 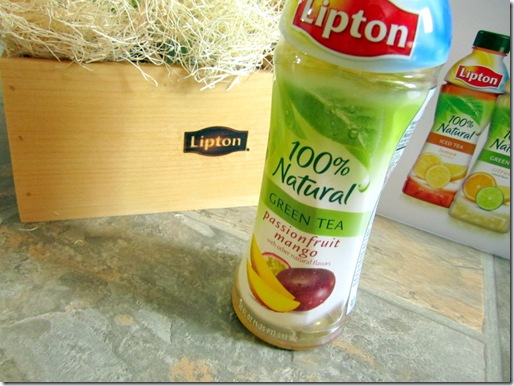 This tea was probably my favorite out of the four non-diet flavors. I loved the tropical flavors, which immediately made me think of summer. I’ll bet it’d probably be really good with my beloved Malibu rum, too.

To celebrate the launch of their new line of iced teas, Lipton has also partnered up with Pandora.com to give tea drinkers a chance to experience “The Natural Side of Music.” According to Mary Barnard, Vice President and General Manager of the Pepsi Lipton Tea Partnership,

“We created 100% Natural Lipton Iced Tea because we believe that the ultimate iced tea refreshment starts with great tea and simple, natural ingredients. You could say the same is true with an acoustic performance that showcases the raw and natural talent of a musical artist. PANDORA internet radio is a great partner for this summer-long program that encourages consumers to express individuality through their tea and music preferences.”

The stations available include:

Time to head to softball…let’s hope for another win!

Do you enjoy drinking iced tea? What’s your favorite flavor?

I wrote this review while participating in a blog campaign by Gen-Yknot on behalf of Lipton and received Lipton product samples and a subscription to Pandora One to facilitate my candid review. Gen-Yknot also sent me a promotional item to thank me for my time.