So yesterday was…ehh. Although I might be feeling slightly better today, yesterday was one of those days where I just wanted to stay curled up in a ball on the couch and not have to move.

Cody was my buddy, of course, and would come to check on me every now and then.

Actually it was more like he’d be in the mood for a good head scratch, so that’s when he’d come and see me. You know, when it was convenient for him.

I didn’t take too many photos of food, but I’m happy to report that the cold has had no affect on my appetite (*knock on wood*). In fact, I’m still as hungry as ever. Most of my eats yesterday were mini meals and snacks that I’d grab when I’d eventually have to get up to go to the bathroom or stock up on more tissues.

One snack I did snag a photo of was Wasa crackers with The Laughing Cow strawberry cream cheese and banana slices. This was a new combo for me – definitely a fan!

At one point during the afternoon, I wound up with a small window of feeling halfway decent, so I used that as an opportunity to shower and actually baked some cookie bars. 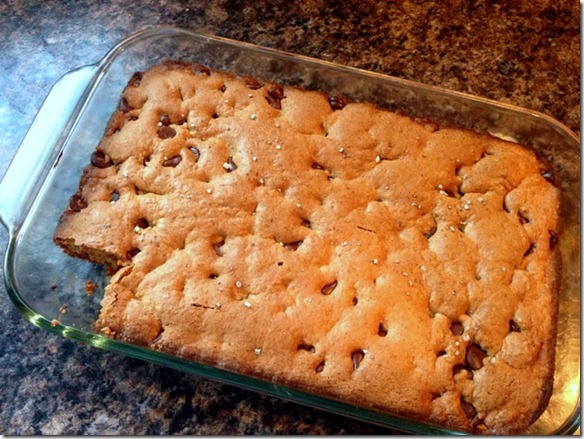 I attempted to take a cookie recipe I have from Cooking Light and make them into bars, but I slightly overcooked them. It’s too bad, since the flavor of these things is incredible (yes, I could even taste them!) so I think I’ll have to attempt them again another time.

Shortly after I finished baking (and sampling) those, my window of feeling good quickly closed and I was back on the couch. I had zero desire to make anything for dinner, nor did the hubby, so he graciously offered to go out and pick us up a couple of salads from our favorite spot. 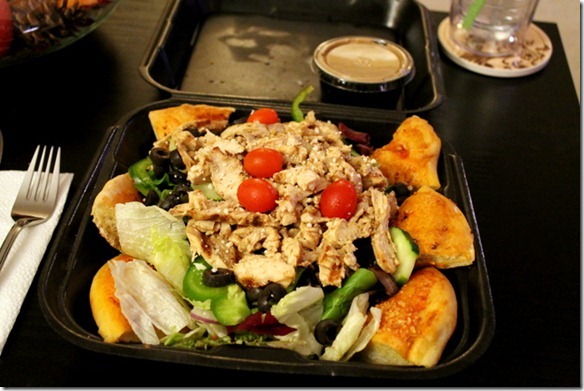 That’s an old photo, but this time they actually remembered to keep the olives OFF of there, so it wound up being one of the best salads I’ve had from them in a while.

Jay and I both had a good laugh during dinner though; at one point, he looked over and noticed how slow I was eating. I then explained to him that, because my nose was so plugged, I couldn’t really breathe when I had a mouthful, thus I had to take it slow. It was funny…even if it was at my own expense.

I was in bed pretty early last night and wound up getting about ten hours of sleep (albeit extremely interrupted) so by the time I got up this morning, I was hungry for breakfast. 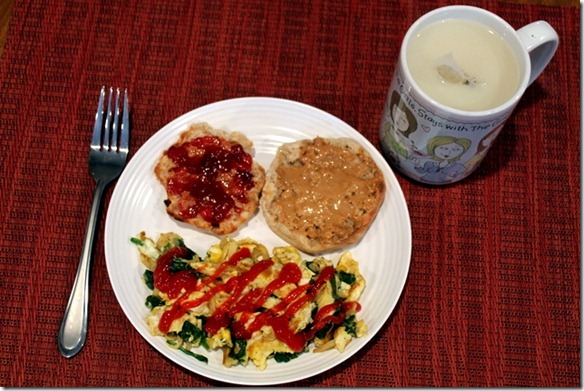 A hot cup of green tea, along with a toasted English muffin with PB&J, as well as a scrambled egg + egg white with spinach, onions, and tomatoes. 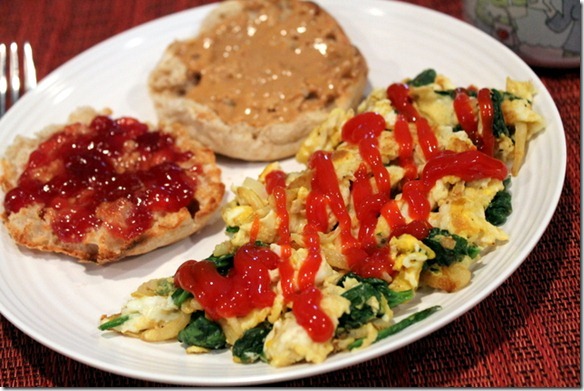 From what I could taste, it was a pretty good breakfast.

I’m forcing myself to get up and out of the house for a bit today, since I’m sure the fresh air will feel awesome. I do have grocery shopping to do, but we’ll see how the runny nose is later…I totally do not want to be “that person” browsing through all the fresh produce coughing, with tissues in hand. Eeeeeew.

But hey, how’s the rest of the world doing out there? Hopefully you’re out and about enjoying your weekend!