Goooooood morning! How are things shakin’ for everyone this morning?

We’ve got a little bit of rain that just finished up over here, which would normally make things feel quite cozy and comfy, but it’s so darn muggy! I don’t know what happened? Humidity always makes me feel just so…icky.

Ooooo baby, was it a good one! 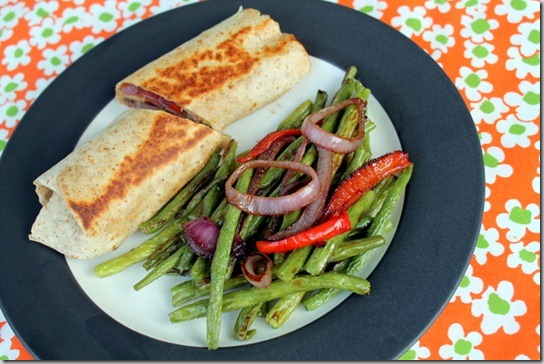 We had (and still do have) a good portion of steak leftover from Sunday’s dinner, so I decided to repurpose some of it last night with some grilled steak fajita wraps. I used a couple LaTortilla Factory wraps and filled them up with some thinly sliced steak, a slice of provolone cheese, sautéed peppers and onions, and a smear of guacamole. 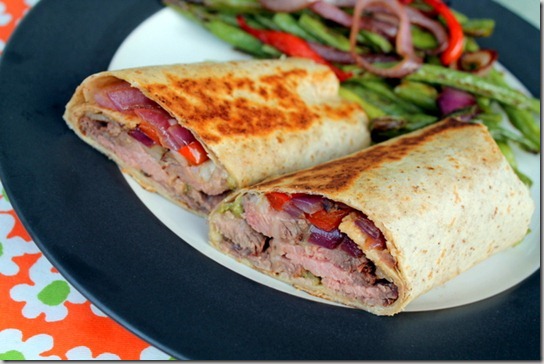 Besides the fact that the guacamole was spicier than spicy (I bought a box of Wholly Guacamole snack packs and accidentally grabbed the spicy kind, and I’m a wimp when it comes to spicy food) these wraps were sooo good. To “grill” them, I simply placed them right into the sauté pan that the peppers and onions were in and let them crisp up on each side…just enough to make the insides warm and delicious.

On the side, I roasted up a batch of green beans (and ended up tossing some extra sautéed peppers and onions on top) that came out awesome. 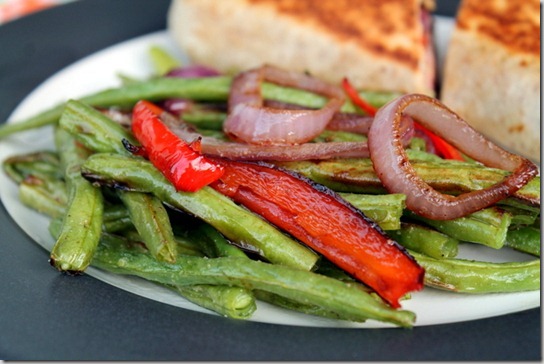 The green beans were ridiculously easy to make…you ready for this?

It was a great, great dinner, which left the boy (and me) very happy.

I was *this close* to having the same breakfast sammy I had yesterday, but after making one for Jay this morning (I’m on a roll, I’ll tell ya!) I decided I wasn’t in the mood. 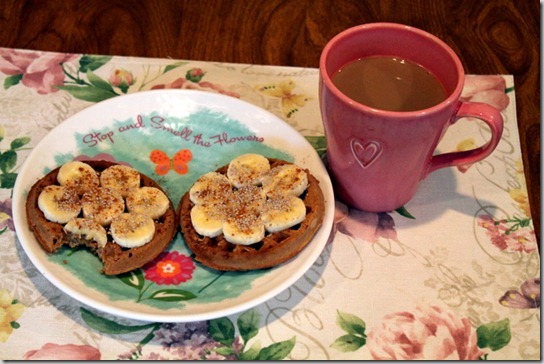 And look at me…I even took a picture of them – again – after I told you I wouldn’t. 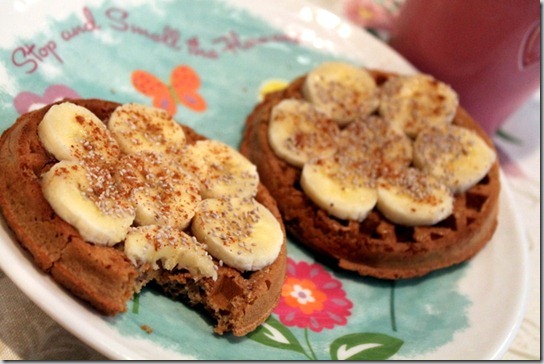 I’m such a fibber.

Today I was back to Van’s waffles, and now I honestly can’t tell which ones I like better. These were good, but the last ones I had were just as good, cheaper, and had four more in the box. I don’t know…I think I may have to go back to my Eggo NutriGrain’s.

I feel like I’m going to be spending my entire day in the kitchen today. I have a few recipes to try out for a freelance piece I’m doing, and then I have to start making some cupcakes for Kathryn’s rehearsal dinner on Thursday (I’m so honored she asked me!). It’ll be very interesting to see what my food intake is like today.

Oh, and as a side note? I am ridiculously sore from yesterday’s workout. Yes, from a 10 minute strength workout. Sayonara, strength and stamina!

What’s the last meal you made that was a great success for all?