Well let me tell you something…pregnancy hormones can be a real bitch sometimes.

I guess that could come off a bit harsh to start out today’s post, so here’s a picture of some pretty tulips that my MIL brought over for Easter to help lighten the mood a bit. 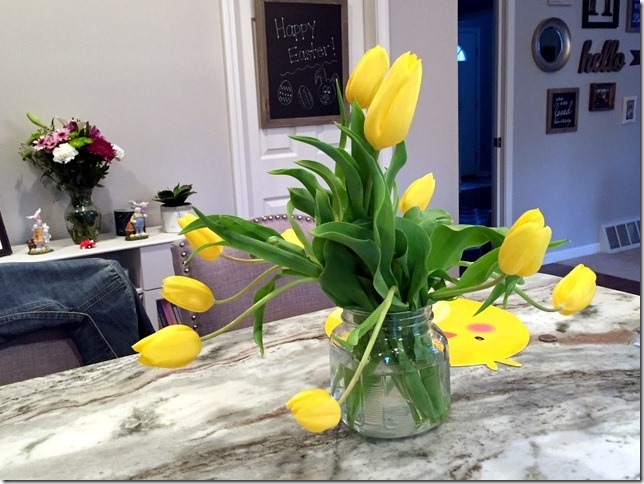 But seriously. Over the past week or so, I wind up having these uncontrollable bouts of crying where I literally just can’t stop myself. Usually they only last a minute or two, but last Friday and then again on Monday night…they were doozies.

Monday, I’m pretty sure, stemmed from the fact that Lucas wound up falling off the couch and smacking his head hard on the coffee table while we were playing together. 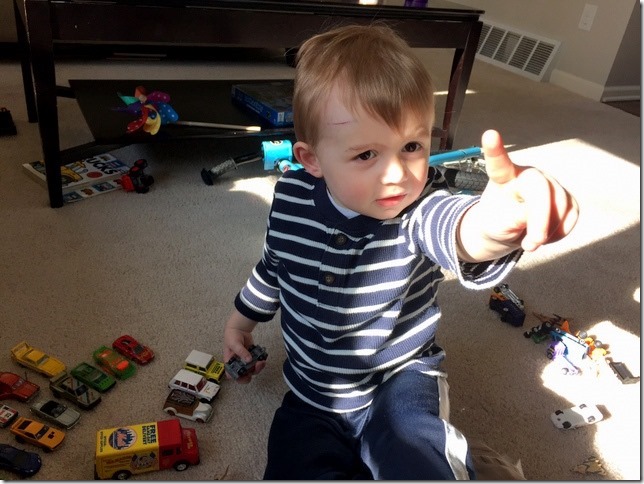 Thankfully he’s fine, even though he has a nasty looking mark on his head to show for it. But as I was sitting with him, trying to comfort him with a cookie while simultaneously trying (and failing) to get ice on his forehead, I felt the tears working up for feeling guilty that it happened on my watch.

Then after that, Jay and I were just chatting and I made a totally lighthearted/joking comment about me growing rather “large” compared to another pregnant person we know, thanks to my love of donuts these days. He, also jokingly, responded back with something like “well, I doubt she eats as many donuts as you!” and for whatever reason (because any other time, this conversation would be nothing but funny), that threw me over the edge.

I tried hiding myself in the bathroom for a while to wait for the tears to stop, but the damn things just kept on coming! And then from there, it spiraled into my mommy guilt about bringing home a second baby and my fear of how Lucas will react. You guys already know that this has been hard on me, but I’m finding that some days are really tough. And I’m struggling. Like, to the point where I wonder whether or not my reaction to it is even normal. I mean, of course I’m thrilled we’re having another baby(!), so why can’t I just focus on that, as opposed to dwelling on the fear of the unknown? I’m a first child, and I turned out just fine (well, most of the time I think so…), so why am I so concerned about Lucas?

I just don’t know. So I’m blaming it all on the hormones. It makes me feel better to have an excuse for my crazy, occasional crocodile tears.

But thankfully, after Monday night’s 4 hour on/off crying episode (I kid you not, it went on for that long…poor Jay, he didn’t know what to do, haha), I’m happy to report that the hormones seemed to get themselves in check yesterday. I have no doubt that the weeks to come will have more of that, but hey, I’ll just embrace the good days with no tears and maybe I’ll even be able to wear my contacts tomorrow as opposed to having to hide my puffy eyes behind glasses?

WELL…I guess that got a little long winded, since today’s post was really meant to be more of a lighthearted WIAW sort of deal. But hey, you guys know I like sharing the bad with the good, so there you have it. Now that you know what a complete emotional mess I’ve been this week, how about we awkwardly transition to some WIAW?

I don’t think I’ve done a WIAW post in a while (that could be a lie, I’m too lazy to go back and check), but at any rate…here’s a look at what I ate yesterday (Tuesday). I documented just about everything, and I’ll be honest…this was actually a much “healthier” day of eating for me than what I’ve been enjoying lately. There are usually way more snacks (and sugar…and donuts), but yesterday happened to be a bit better. Hooray, balance!

You guys know I usually eat breakfast once I get to work, but I was hungry while getting things ready in the morning so I snacked on a couple of leftover PB&J triangles on a sandwich thin that Lucas never ended up eating for his lunch the day before. 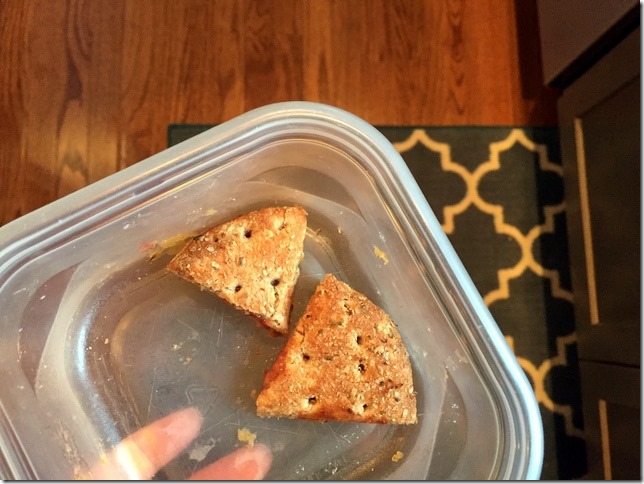 Mini Wheats Blueberry Harvest Delights (x3 because I didn’t have a bowl and needed to use a mug) with sliced banana and almond milk + a cookie dough iced coffee (1/2 caf) with skim (a freebie, thanks to my app!) 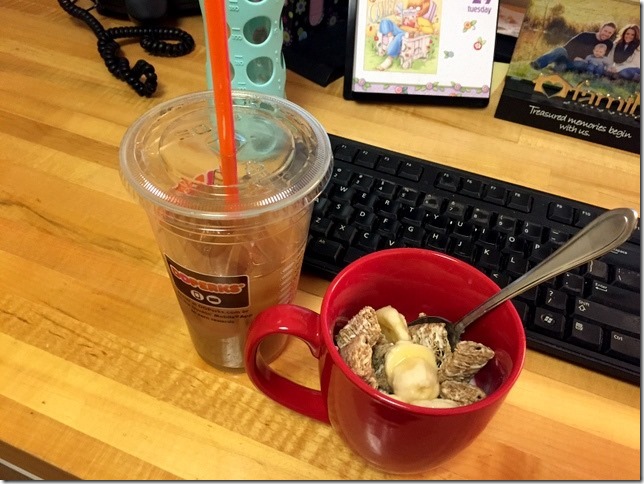 I bought that cereal randomly when I noticed it was on sale and I had a coupon for it, and it is REALLY good. I’ll totally buy it again. Mostly because I’m just all about cereal right now.

A handful of almonds – these are my favorites! 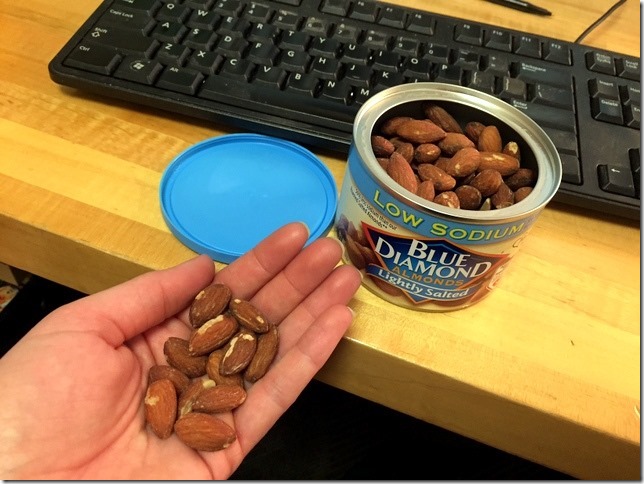 A big salad made with all sorts of veggies, some leftover turkey and asparagus from Easter, avocado, dried cranberries, and balsamic vinaigrette. 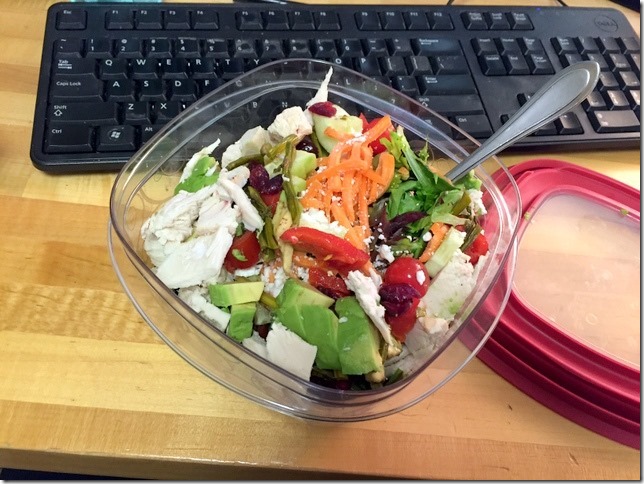 A King’s Hawaiian sweet roll (again, another carb I absolutely adore) with a huge scoop of peanut butter. I really could have used a big glass of milk after that one! 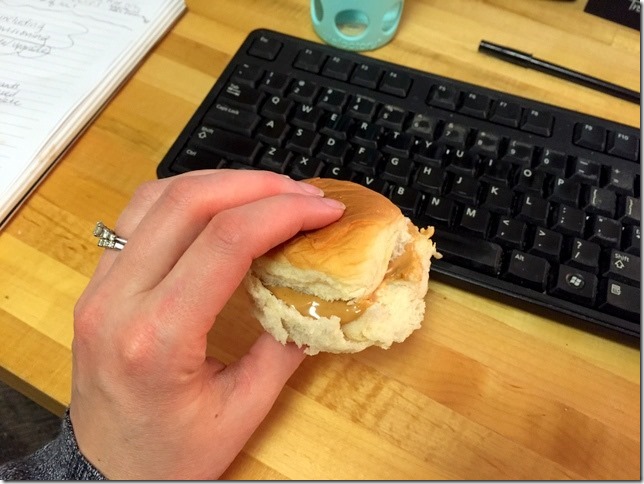 Some jelly beans and a few Starbursts out of the Easter baskets (thanks, mom and dad, for still making us baskets!). 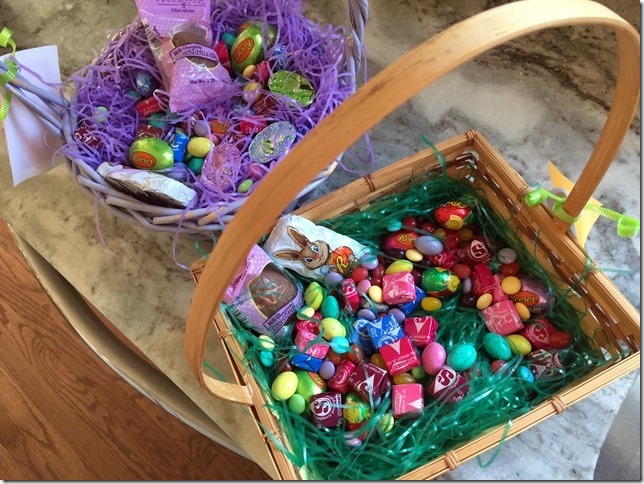 This Chicken Burrito Skillet (SO good!) topped with some avocado and sour cream. 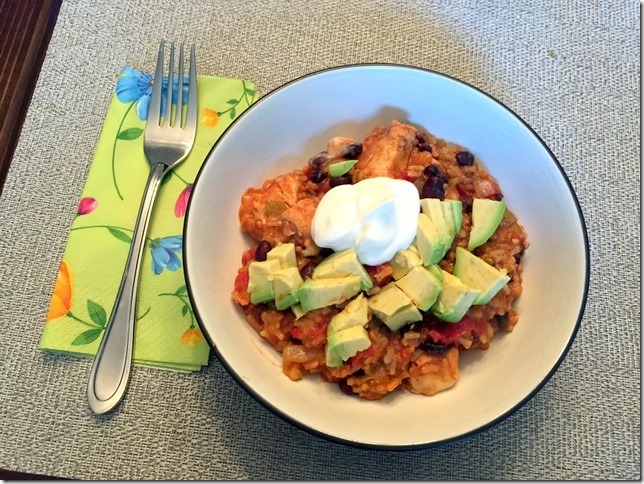 The skillet was all sorts of cheesy and totally delicious. I’d highly recommend! 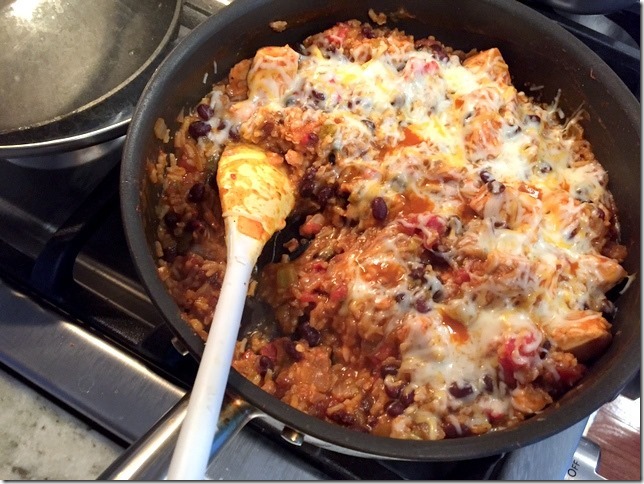 Hasn’t happened yet (as I type this out on Tuesday evening), but as soon as I get this post scheduled, I’m likely hitting up the fridge for some more leftover strawberry trifle from Easter and/or some more Easter candy. Baby is asking for it, so I obviously can’t deprive him, right? RIGHT!

How about you guys? How’s the week treating you so far? Any good eats lately? Any crazy lady moments you can relate to?