It’s another beautiful day in the neighborhood around these parts! Highs today are reaching into the mid-70’s which is about 30 degrees above normal. All I’ve got to say is…if Mother Nature decides to bring back winter after tomorrow’s first day of spring, I will not be very happy with her. I LOVE this warm weather!

After teaching Tabata this morning (with blog reader, Amy – Heyyyy Amy!) I got to work on my own workout. Today officially kicked off week 3 and phase 2 of Tina’s Bootcamp and I was really excited to get things started. The workout on tap for today called for circuit intervals + lower body supersets.

There were three supersets which I performed 3 sets of each on, with a 5 minute cardio burst in between each superset. So things pretty much went like this:

By the time I was finished, my legs were pretty much like mush…I love it!

That workout seriously worked up an appetite, so I was starving by the time I got home. I really just wanted to eat whatever was in arms reach, so I was rather proud of the fact that I was able to hold off and wait for this delicious batch of pumpkin oats. 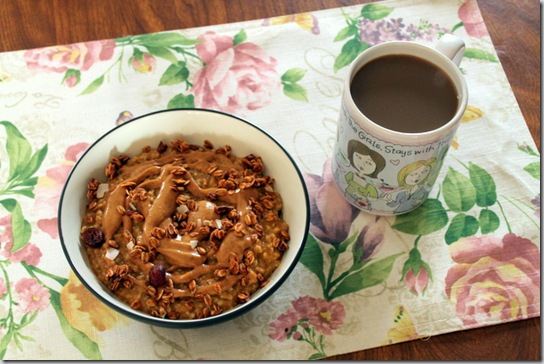 Yes, PUMPKIN oats! I had a craving, saw the can in the cabinet, and made it happen. To make today’s batch, I combined:

I added more water than usual and just let the oats continue to cook slowly over low heat, which made for a nice, voluminous bowl. 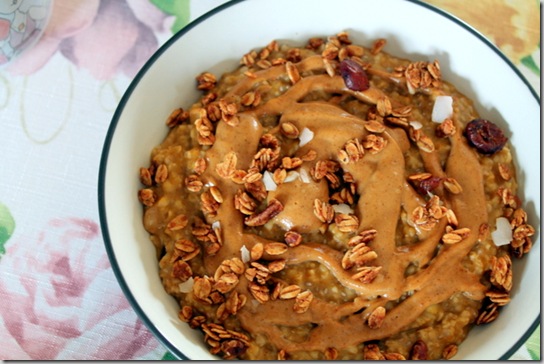 I topped things off with a serving of Honey Cinnamon PB and some Sweet Cranberry Pecan granola. 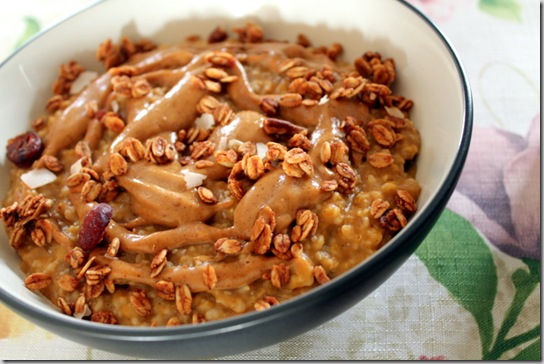 It’d been a long time since I brought out the pumpkin…almost too long…so it’s always nice to bring it back into the rotation once in a while.

The rest of my morning was jam-packed with doing things around the house and catching up on blog stuff, and before I knew it, I realized I’d better make some lunch so I’m not late for my afternoon shift at work. 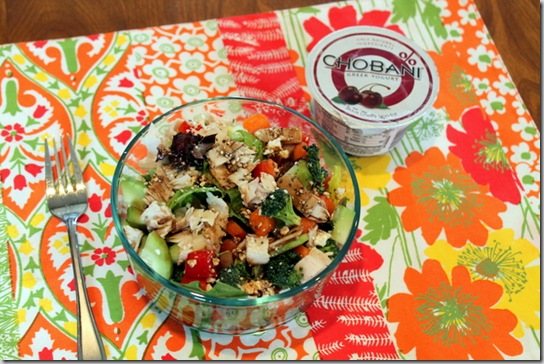 Veggies have not been getting enough attention for the past few days, so a big ‘ol veggie-packed salad was definitely in order. Along with the veggies, I topped my salad with a few slices of low-sodium deli turkey, feta cheese (another one that’s been outta the loop way too long), and some EVOO + balsamic vinegar + basil, oregano, and garlic. 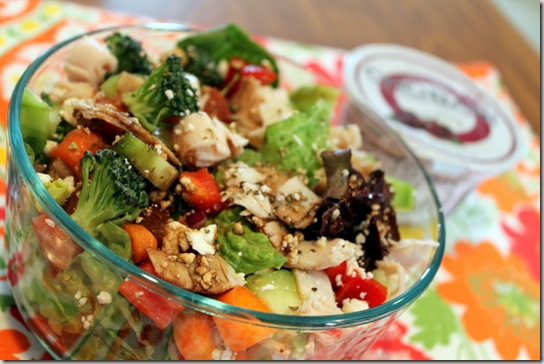 To satisfy the sweet tooth, I finished things up with a black cherry Chobani. 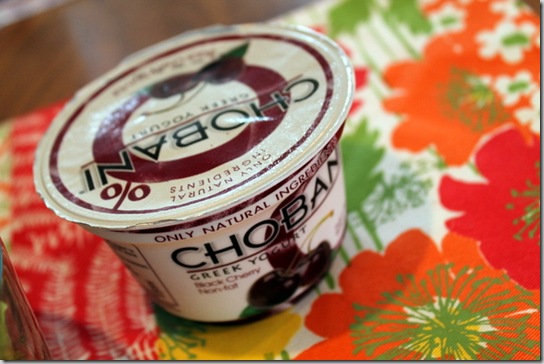 I’ve gotta eat these quick…Jay found out just how good they are and now he likes to try and take ‘em on me. Sneaky sneaky.

I’ve got a meeting at work this afternoon, followed by a somewhat later than usual Monday shift so I’m not really sure what’s up on the dinner front. I’ll tell ya though…if another batch of last night’s quesadillas happened to make an appearance again, I certainly wouldn’t be upset about it. Seriously, if any of you decide to make them, let me know what you think; I’m pretty convinced they may currently be the best thing since sliced bread.

Any foods you’ve recently brought back into rotation after taking some time off?