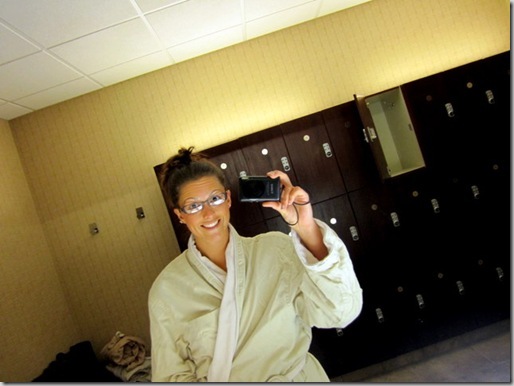 Can’t ya tell by my super cheesy, no make-up and greasy hair expression?

As I mentioned earlier this morning, today I had an appointment for a long-awaited massage, which I had gotten a gift card for from Jay back at Christmas. I have been meaning to make the appointment ever since, but it just hasn’t worked into my schedule. Thankfully, a last minute call yesterday afternoon got me in for today!

Shortly after I arrived, I was told that I could wait for my masseuse in the relaxation area, so me and my cozy robe headed on in there right after I changed. 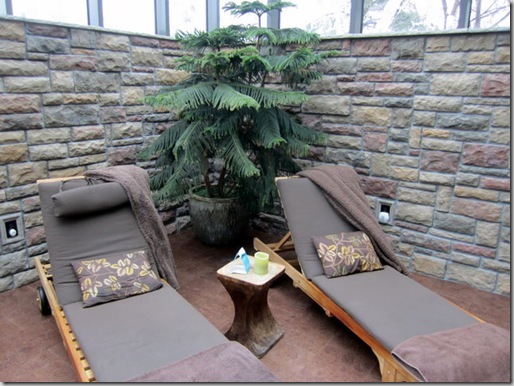 I was psyched to see that there was also a little area with snacks, so I promptly helped myself to some trail mix and water. 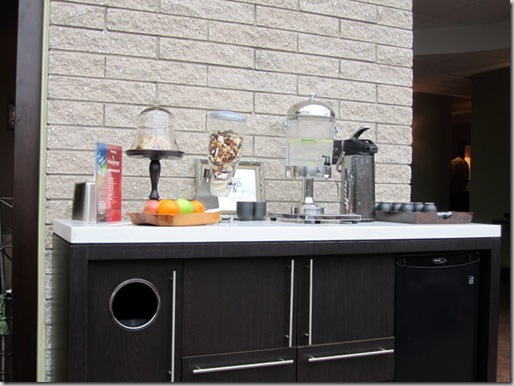 Can someone tell me what it is about spa water? I mean, I know they put fruit in it (today it looked like there was lime), but it just always tastes SO good and fresh to me. Is that weird? Maybe it’s just because I’m feeling super zen…who knows. 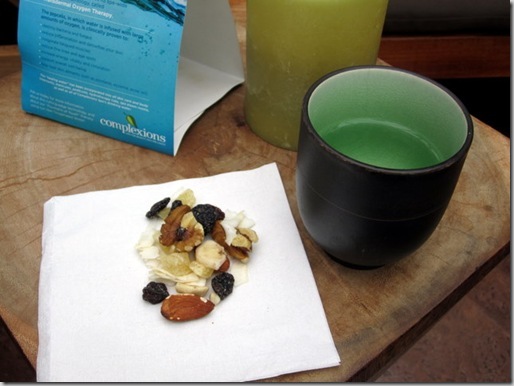 Shortly after finishing my goodies, my masseuse came out to grab me and bring me back to the room. One of the many things I absolutely adored from this room were the sheets. They had to be some of the comfiest, softest sheets I’ve ever laid in. I meant to ask what they were, but I forgot, of course. 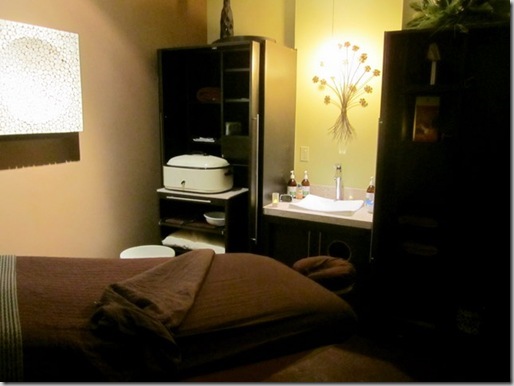 I opted for just a regular, relaxation massage today, which felt absolutely wonderful. I debated on going deep tissue, which I probably could have benefited from, but I just wanted to chill out. It was fantastic.

After my massage was over, I decided to hit up the sauna for a quick 10 minutes where I’m pretty sure I almost fell asleep about five times. 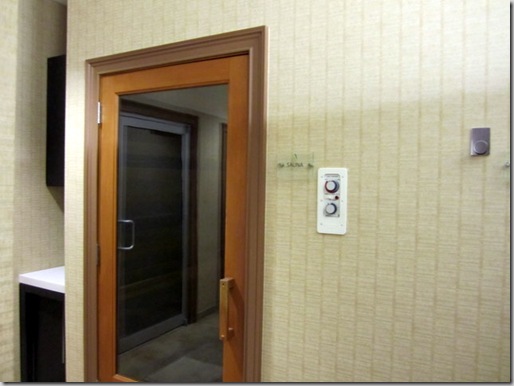 (FYI: My massage today was at Complexions Spa & Salon, which was great.)

A little while after getting home and showering (because as much as I enjoyed my massage, I may enjoy the follow-up shower even more…talk about feeling like a grease ball!), I got started on tonight’s dinner. 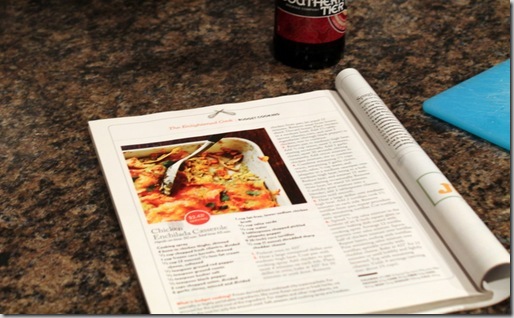 I was fishing through some old copies of Cooking Light last night and came across a recipe for Chicken Enchilada Casserole, so I decided to give it a go. I also decided that I was really in the mood for a beer tonight, so I told Jay to surprise me with one from our “Create Your Own” Six-Pack we got on Sunday. 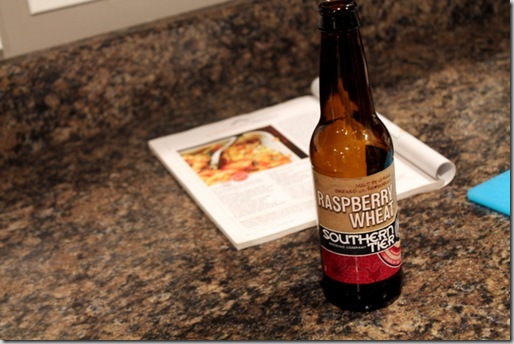 He surprised me with this Southern Tier Raspberry Wheat which was fairly decent. I didn’t realize that it was part malt beverage when I bought it, so it was pretty carbonated. Otherwise, it was thoroughly enjoyed throughout the duration of tonight’s dinner prep. 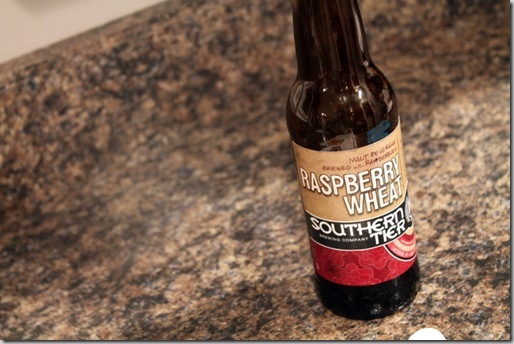 Speaking of tonight’s dinner prep…it was LONG. Had I actually paid attention to the recipe beforehand, I probably would have passed on it. It wasn’t that it was hard; rather, there were just a lot of different steps. 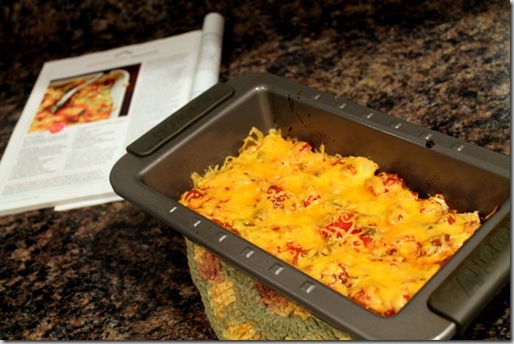 I ended up making a crapload of substitutions to the original recipe because, again, I should have paid more attention to it, but it still turned out pretty good. 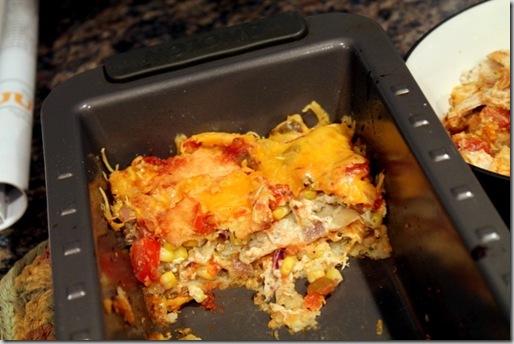 Thank goodness, after all that hard work. 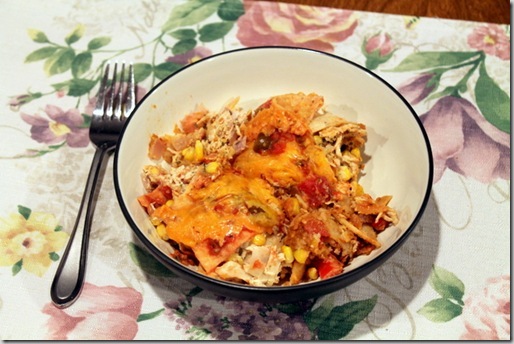 The flavor in this dish was pretty spectacular, and I actually had to reach for my water at least half a dozen times while eating because the spice factor had my mouth on fire (that doesn’t take much, FYI). 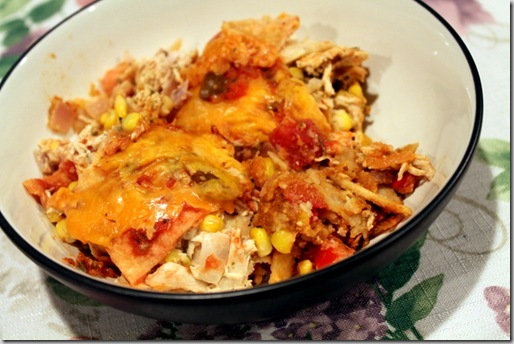 Overall, it was pretty tasty and a nice switcheroo from the usual rotation of dinners.

Now, it’s time to go catch up on the ‘ol DVR…in the meantime, feel free to check out that brand spankin’ new little badge at the top right corner of my blog page. I’ll talk more about that tomorrow, but I will say that I.AM.PSYCHED.

« Feel The Burn Circuit Workout
I Have No Idea, But Thank You! »