Good morning!  Is everyone feeling nice and rested this morning, or are you all still feeling like you need to catch up on that hour of sleep we lost?

I actually don’t notice much of a difference in feeling rested or not, but I was very quickly reminded this morning that it is once again pitch black at 5:30am-  and I was just getting used to having that little extra light in the morning!

So first things first, as always for a Monday…let’s get you caught up on what you may have missed:

Now, let’s backtrack to last night. When I last left you all, I mentioned something about smelling the grill being fired up. Well, I sure was right! 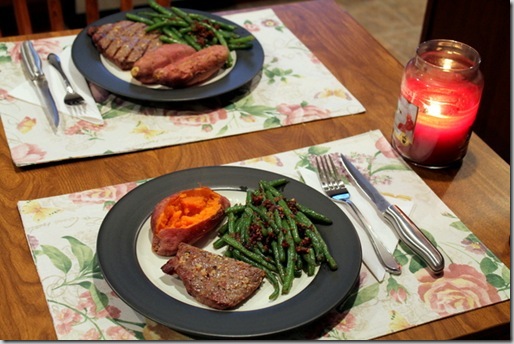 Three weeks in a row now, I’ve successfully coerced Jay into coming grocery shopping with me. I don’t know how long it’ll last, but I’ll take it. So while we were there yesterday afternoon, I told him that he could have his choice for last night’s dinner selection and he (not surprisingly) picked out a couple of petite sirloin steaks.

This was cool for two reasons: 1) I really enjoy a good cut of red meat every now and then, and 2) this meant that I didn’t have to cook it. Score! 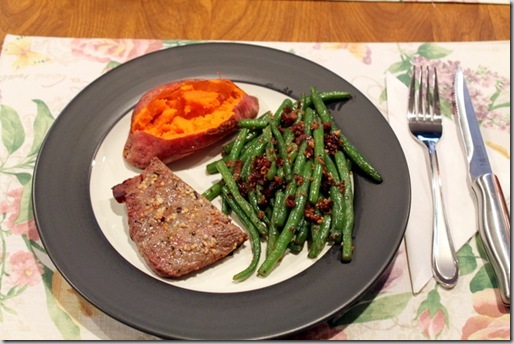 Jay seasoned the meat up perfectly with a bunch of stuff that I’m really unsure of…I usually just stay out of his way and let him have at it. He also cooked up another amazing batch of garlic green beans, while I slaved away at steaming up some mini sweet potatoes in microwave. Yeah, that was tough. 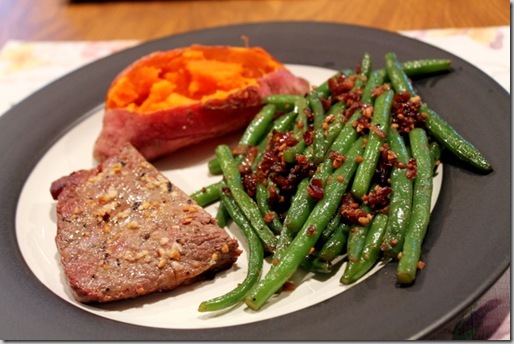 This morning kicked off week 2 of Tina’s Bootcamp and I was excited to get going with it again. Today’s workout was very similar to last Monday’s: 20 minutes of steady cardio (I used the elliptical) + “Workout A.” This week’s Workout A was actually the same one as last week, but it had a tempo change.

Last week, we were instructed to perform the exercises at a 2-1-2 tempo, meaning you take two counts for the initial part of the move, hold it at peak contraction for one count, then return to start for two controlled counts.

This week, the tempo has been changed to a 4-2-1 tempo, meaning that you take four counts for the initial part of the move, hold it at peak contraction for two counts, then return to start in one controlled count. And then on top of that, the final rep included 15 small pulses at the peak contraction of the move. WHEW!!

Repetition Tempo is actually a very important variable to consider when designing a workout program, so I was glad to see that Tina incorporated this. The amount of time that a muscle is under tension will actually give specific results; for example, a tempo of 4-2-1 is often used in the initial phases of training because the slower speed places more demand on the connective tissue and stabilizing muscles, which better prepares your nervous system for functional movements (you know, those ones we talked about last Friday).

Hey, there ya go…a quick little training lesson for your Monday morning.

Nothing you haven’t seen before, my friends… 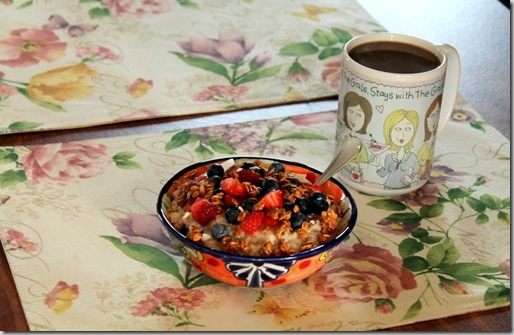 A fresh cup of coffee and a big ‘ol batch of Mixed Berry French Toast Oatmeal. 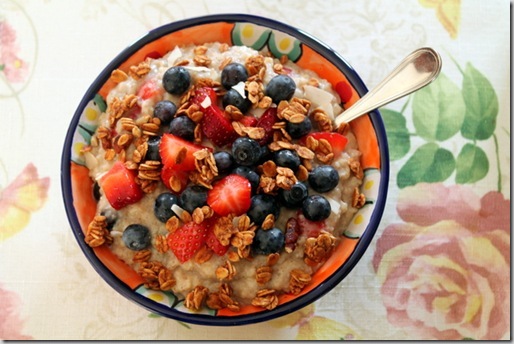 Oh, and a little side of creeper, too. 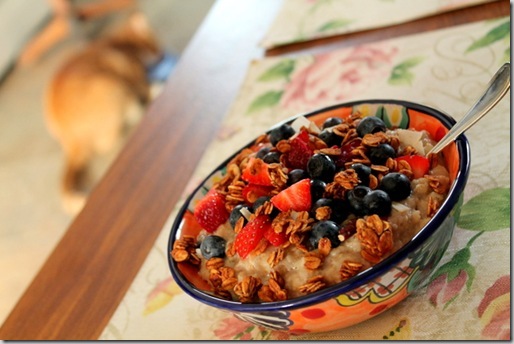 Alright, I think it’s about time for a shower…that workout from this morning was a sweaty one!

Do you ever pay attention to your own repetition tempo when/if you lift weights? What tempo would you say you usually use?