Another Thanksgiving has come and gone. I swear, these holidays just keep going by faster and faster as I get older!

But it was certainly a great day. 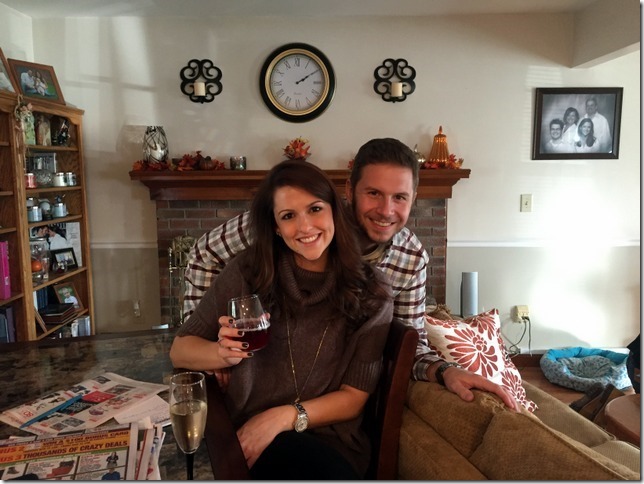 Unfortunately, as I had expected but hoped wouldn’t happen, I woke up Thursday morning feeling rather under the weather. Our original plan was to get up, have breakfast, then go visit my mother- and father-in-law over at the nursing home. But since the nursing home advises against visitors who are sick, I had to stay behind. Luckily, Jay and Lucas were still able to go and visit for a little while though…I was just sad I had to miss out.

Once they got back home, we took care of a couple of quick house things, and I also got started on putting out some of our Christmas decorations. Then we were off to my parents’ house. We’ve got a small, cozy little family on my side, but that’s a-okay by me. It was our little fam of 3, my parents, my brother and his girlfriend Carissa, and my mom’s cousin, Bobby.

Lucas had all sorts of fun playing with a little camera that squirts water and nobody was off limits. 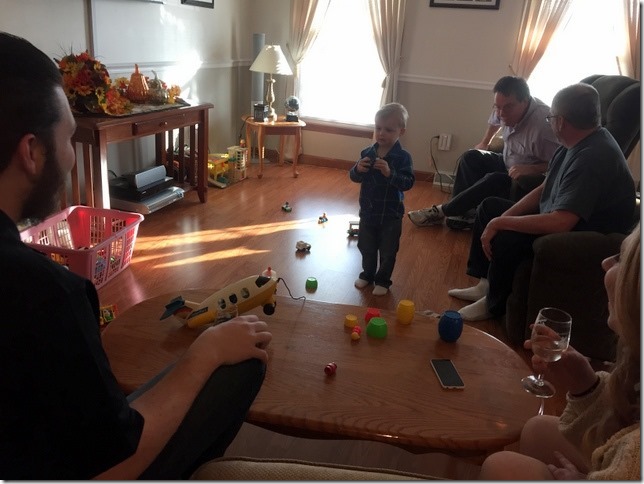 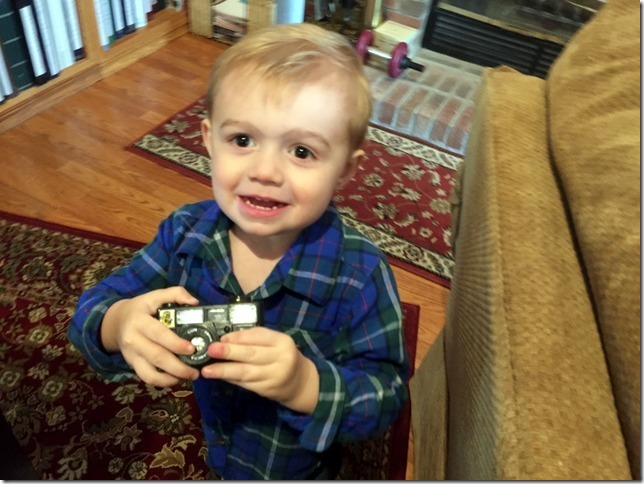 And I swear, this kid loves my old toys more than he loves his own. Go figure?! 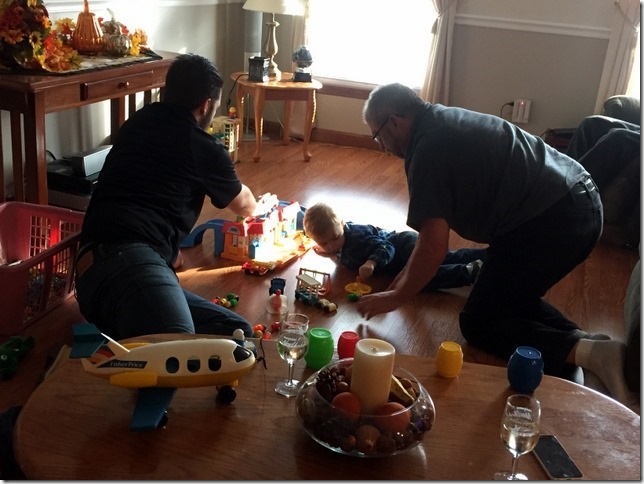 While everyone was enjoying their champagne, I was sipping on sparkling apple grape juice which, okay, wasn’t terrible. But I’m not gonna lie…I reeeeeeally wanted some of that champagne. 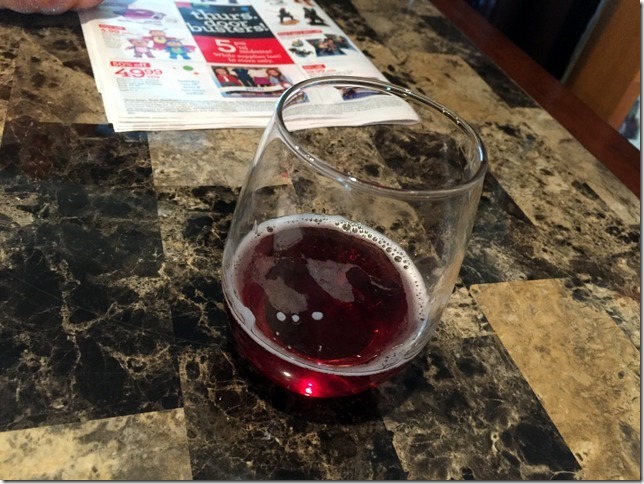 A little bit after 3pm, it was time for dinner! 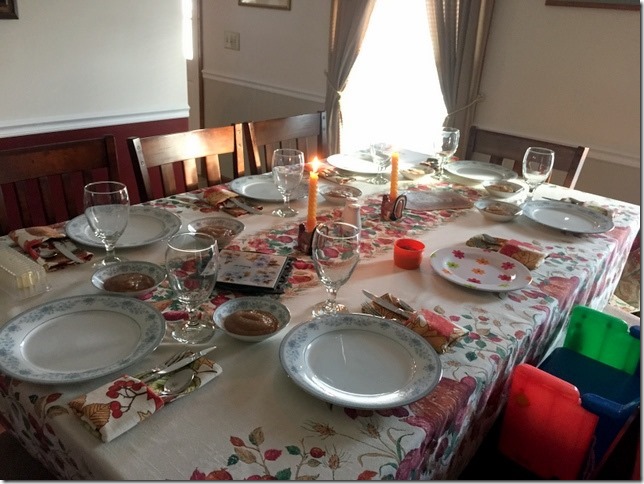 And I’ve always wondered…what time do all of you usually sit down for Thanksgiving dinner? We’ve always eaten early – usually between 3-4pm – so that’s the norm for me for holidays. But is that what many other families do, too? I’m curious!

As usual, dinner was amazing, and I loaded up on a little bit of everything. 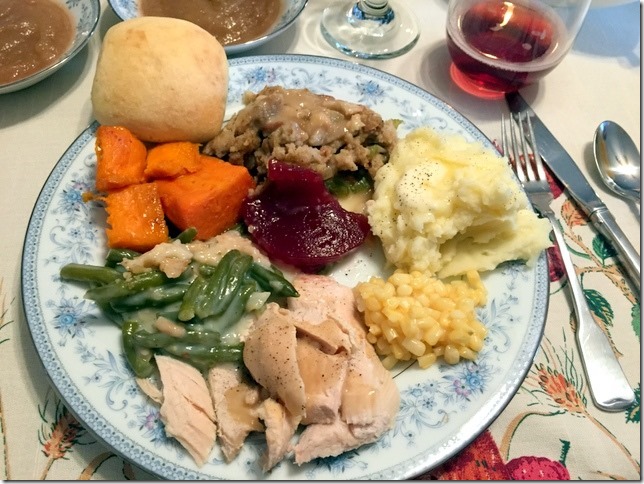 And just like last year, Lucas basically ate nothing except for applesauce. This kid. 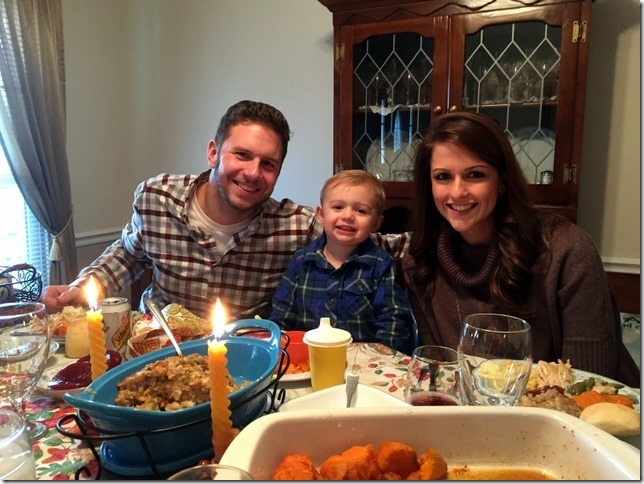 Mom and dad, who put together one heck of a meal! 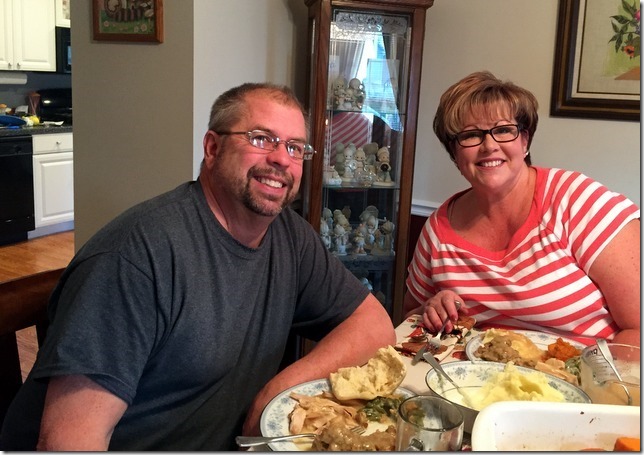 And my hilarious cousin Bobby, Carissa, and my brother Daniel…who is sporting one heck of a bushy beard at the moment. 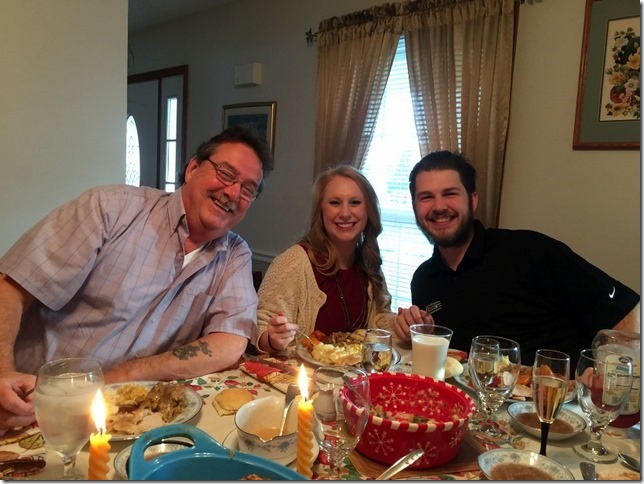 After dinner, we all hung out for a bit and had some quiet time (since Lucas didn’t nap). I certainly could have taken a nap, but that wasn’t happening with this guy crawling all over me with his cars. 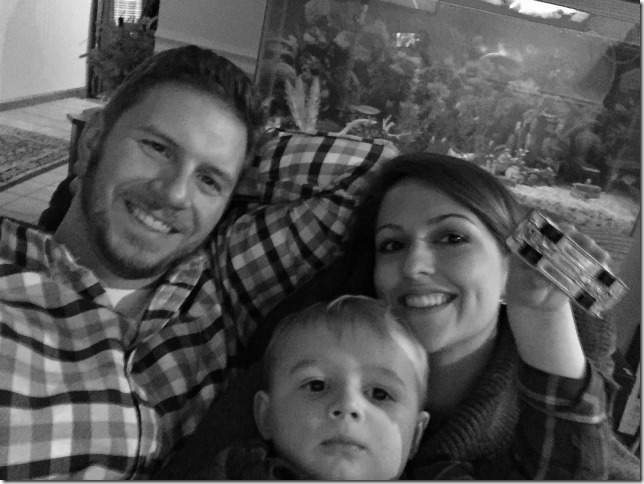 And a little while later, it was time for dessert! Totally non-traditional this year, too. No apple pie, no pumpkin pie…just an absolutely delicious raspberry swirl cheesecake (my mom ordered it the night we went to the cheesecake sampling party). 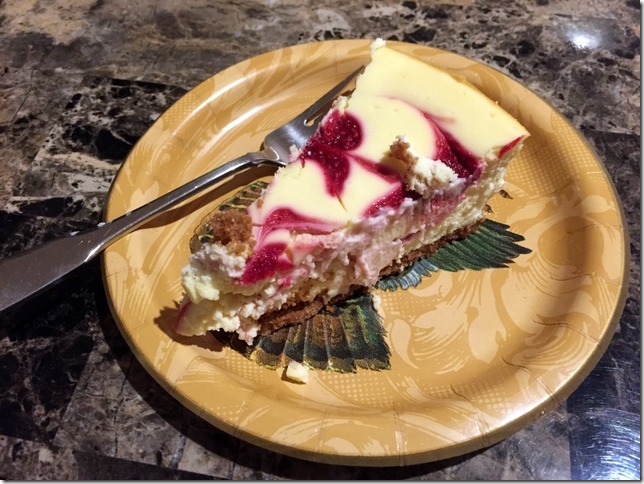 And then it was over! We hung out for a little while longer, and Jay went to drop off a plate for his mom, who stayed with my father-in-law for the day. We came home, put Lucas to bed, watched some TV, and then headed to bed ourselves shortly after that.

All in all, it was a really great Thanksgiving. Crazy to think that next year, there will be one more at the table/highchair.

How was your Thanksgiving? Any funny or exciting stories? What was your favorite part of the meal??

I’d have to say my favorite part of the meal this year was the mashed potatoes. They were super delicious this year!