And with that, another successful Thanksgiving is in the books! 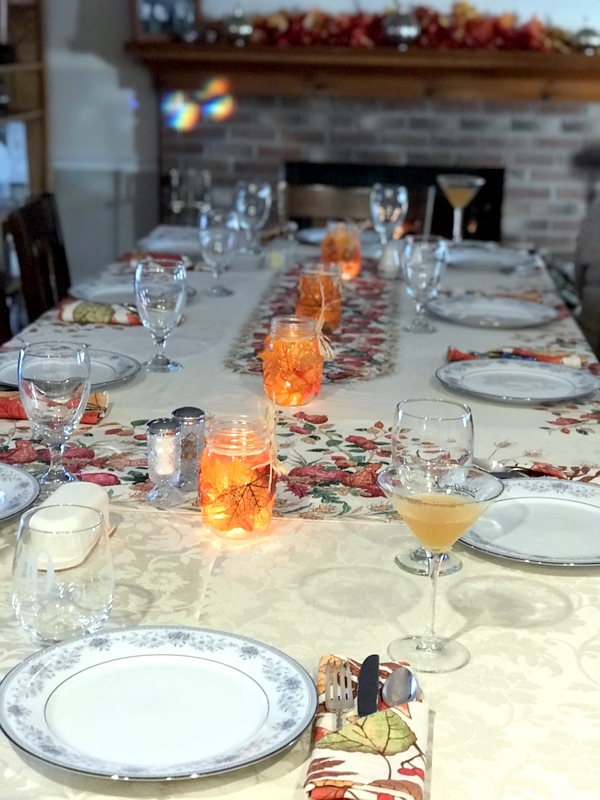 Despite having hosted the past few years, my mom generously offered to host and I was actually more than happy to let her do so. While I’m typically always up for entertaining and hosting guests, there’s just something about organizing a whole Thanksgiving meal that is completely exhausting.

So instead of running around like a crazy person Thanksgiving morning, I got to casually hang around with my boys and watch the parade while doing a little baking. 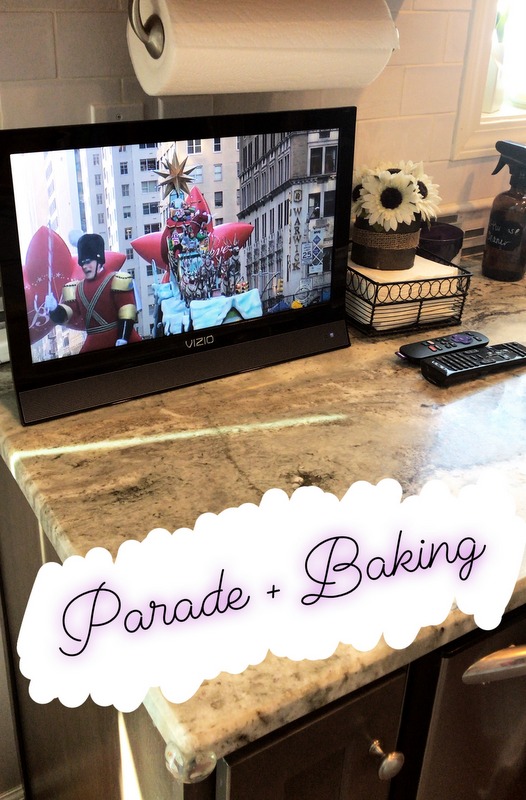 I offered to bring something for dessert to Thanksgiving dinner, and while I could have easily done something easy like cookies and everyone would have been fine with it, I figured the holiday was a good excuse to do something that required a little more effort. 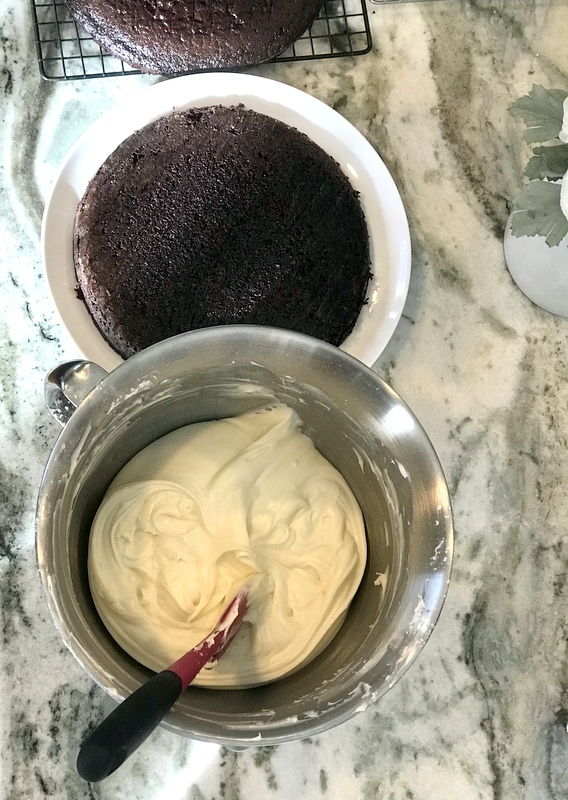 So a four layer, homemade chocolate cake with cream cheese frosting sounded pretty darn delish. I wound up finding this recipe on Pinterest and it actually was not difficult at ALL. I’d say the hardest part was trying to make sure I cut the cake layers somewhat even! 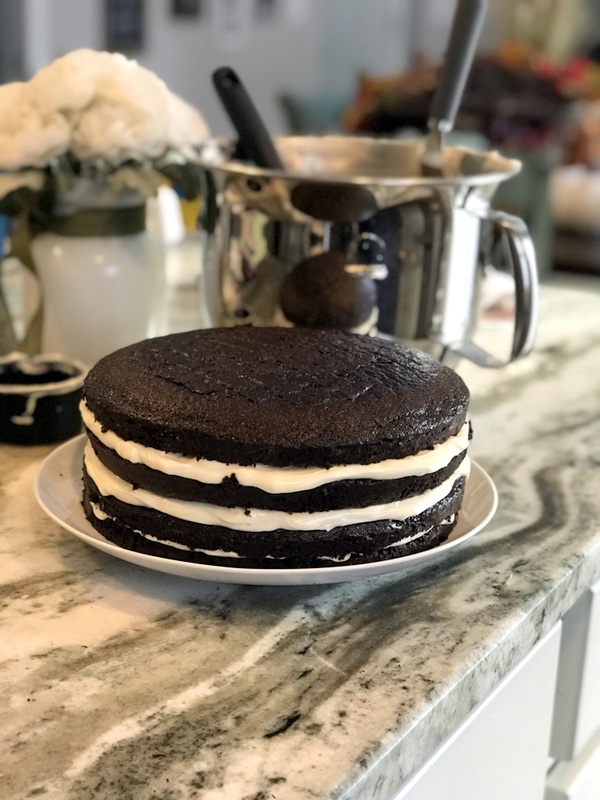 But it totally got 5 out of 5 stars from me, so I would absolutely recommend saving that recipe for if/when you need a “fancy” cake!

Once Alex was up from his nap for the day, we made the short trip over to my parents’ house, where we were greeted with some delicious caramel/apple cider/vodka/champagne beverages, which were truly wonderful. 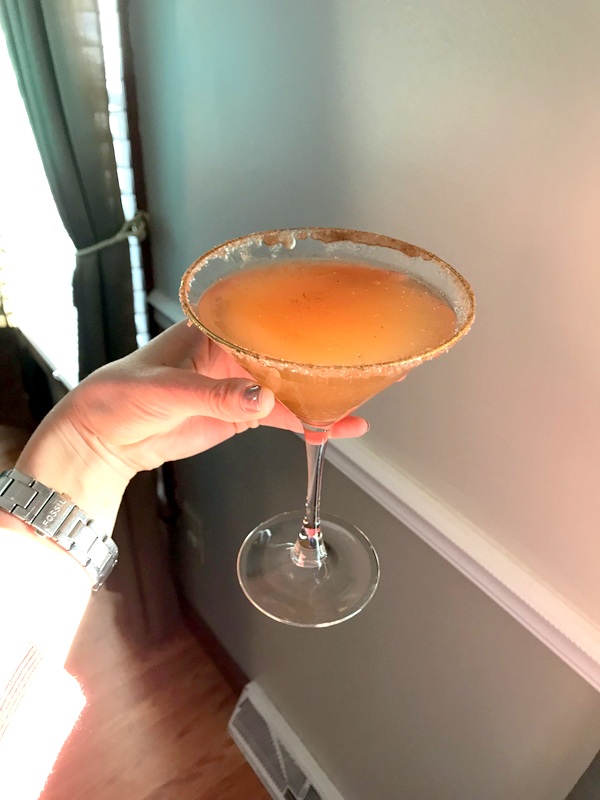 I mean, hand me any drink with a cinnamon sugar rim and I’m good.

The boys were thrilled because my parents brought down their old school Nintendo system. Duck Hunt, anyone?! 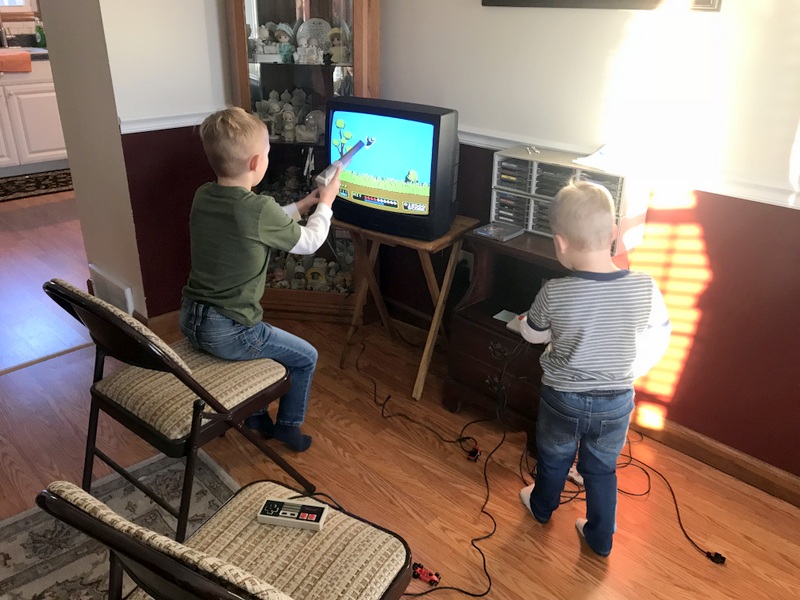 Everyone spent the afternoon playing games and hanging out, until it was eventually time to eat. 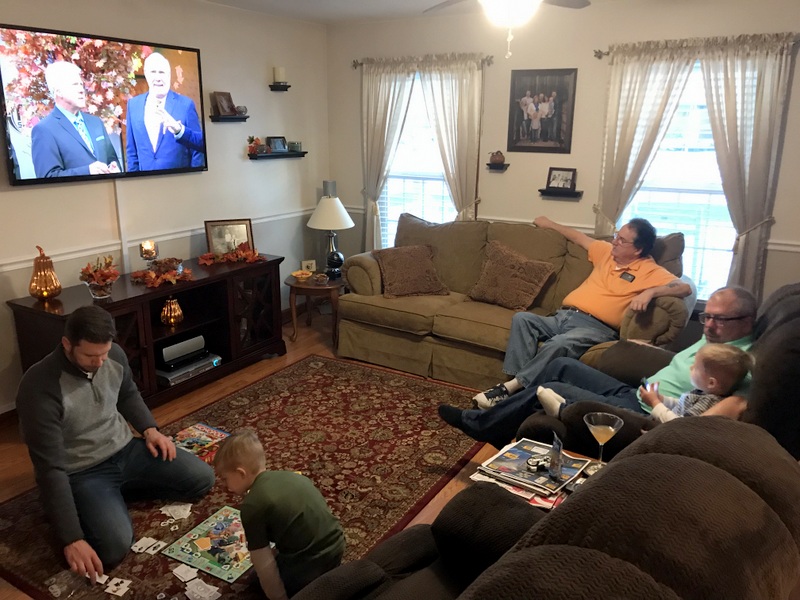 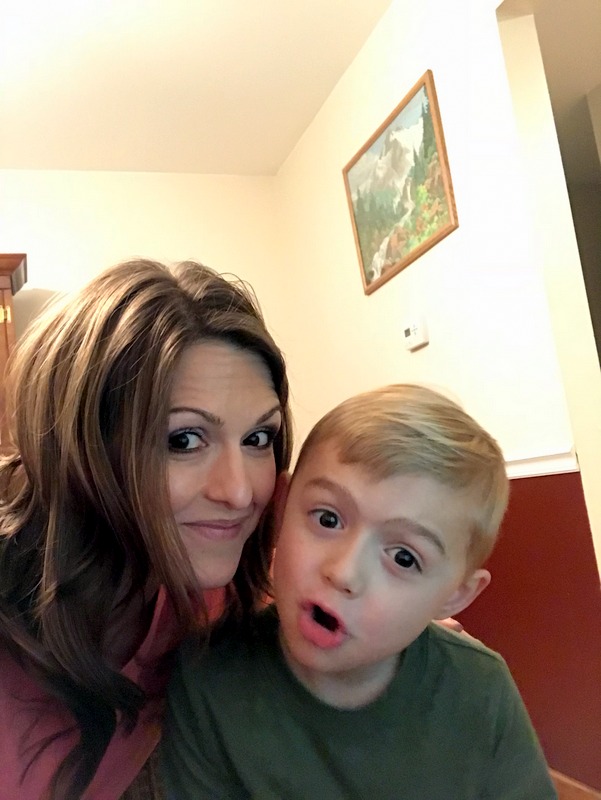 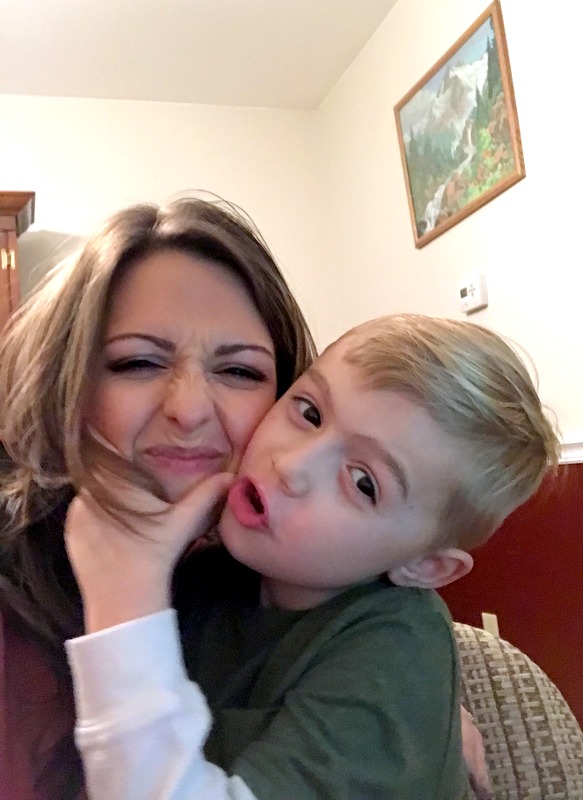 Lucas was so excited because he got his first official “helper” job of scooping applesauce for everyone. <3 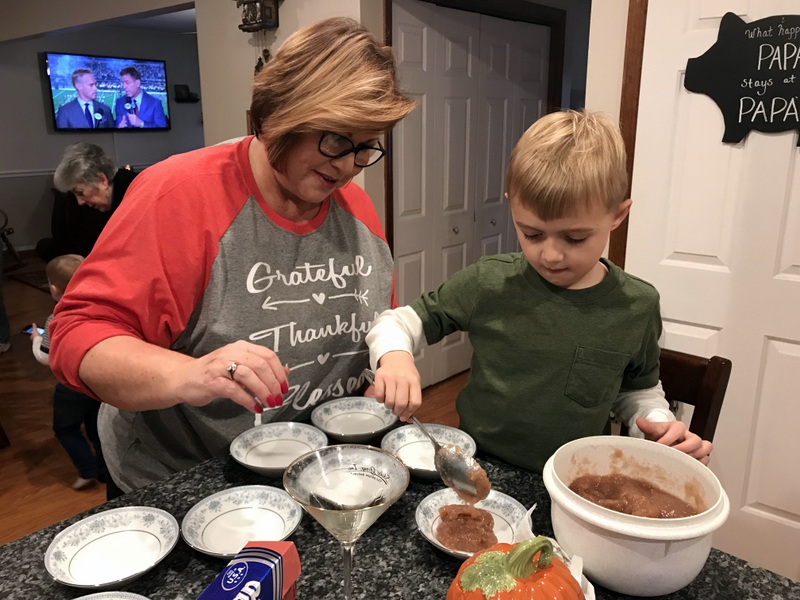 As usual, mom’s spread did NOT disappoint! 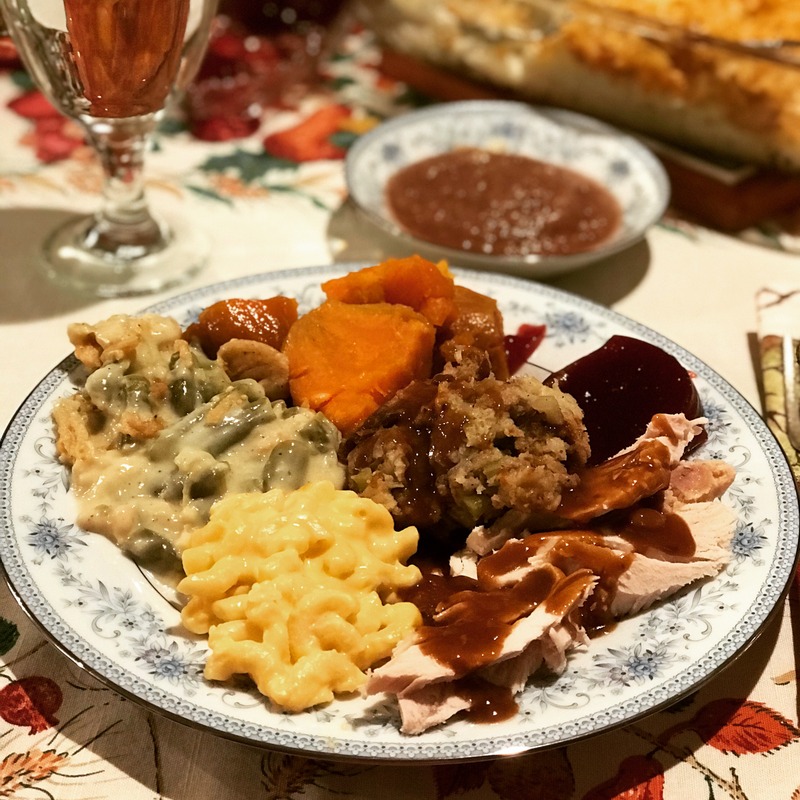 Once we all had stuffed bellies, we passed some more time by playing some bowling until it was time for dessert. 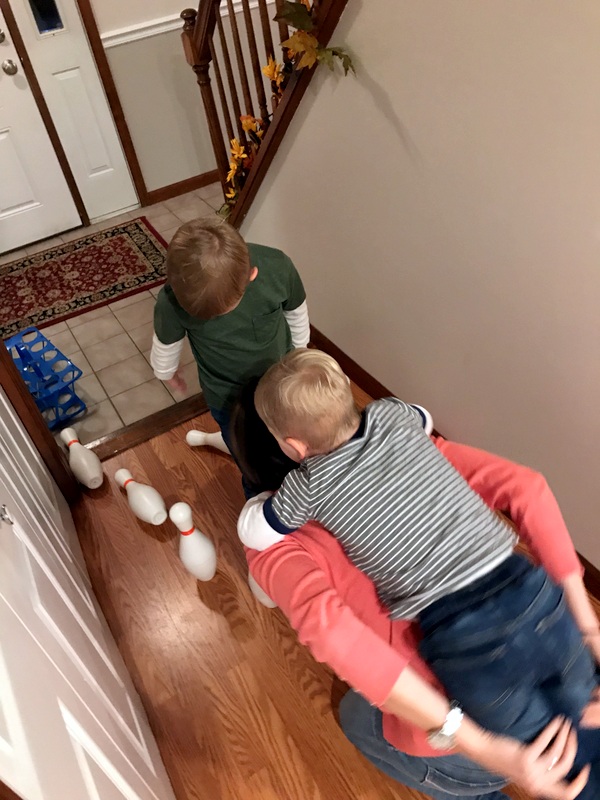 And there is just something about Alex’s legs in this picture that totally crack me up every time I see it! 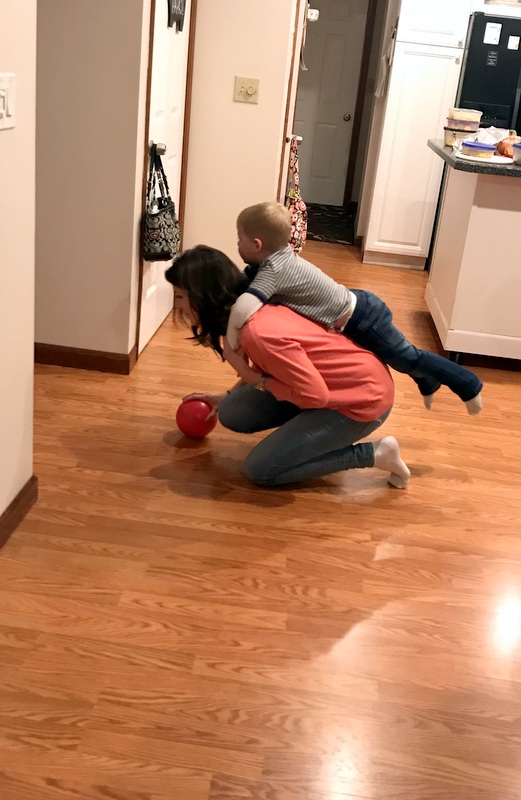 As for that dessert? We kept it simple, and we’re totally not traditional in the apple/pumpkin pie sense, so we had my chocolate cake and a homemade cheesecake to pick from. 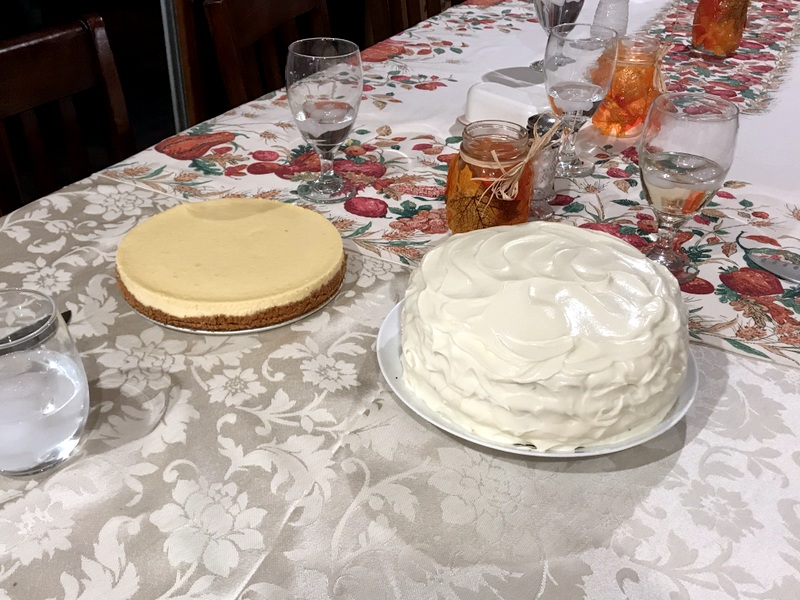 It may not be picture perfect, but OMG it was so, so, SO good. 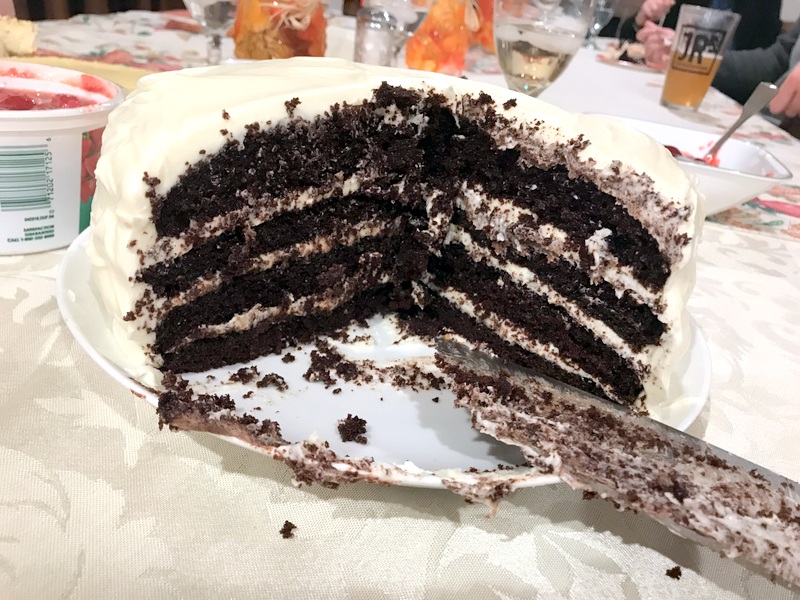 Unfortunately, I got ZERO family pictures from our day (or our weekend, for that matter), but hey, it happens! And it truly was a great day with all of our family. <3

Come Friday morning, the first thing I woke up to was Lucas tapping my forehead and asking if we could finally put up the Christmas tree…right. NOW. He was so excited! So within the hour, the tree was up, boxes filled up my living room, and the Christmas decorating begun. 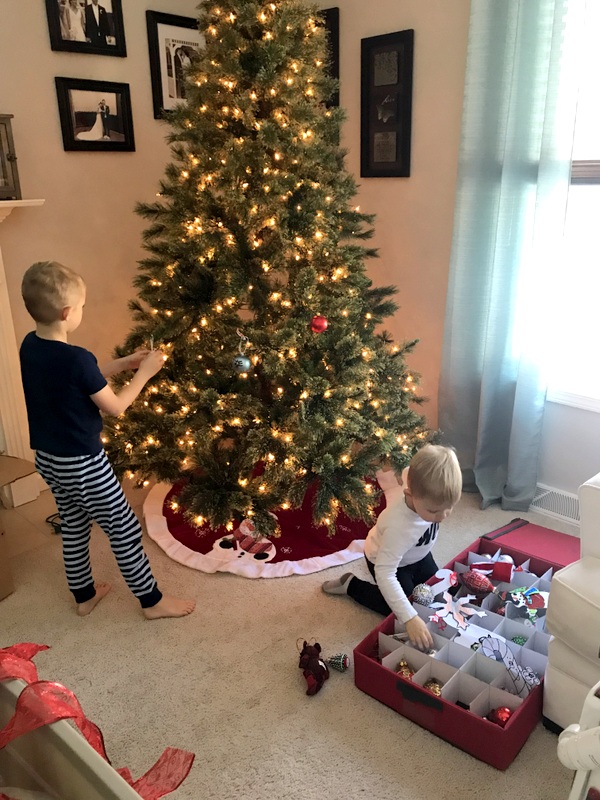 I think the first few days of having the decorations up is always my favorite. <3 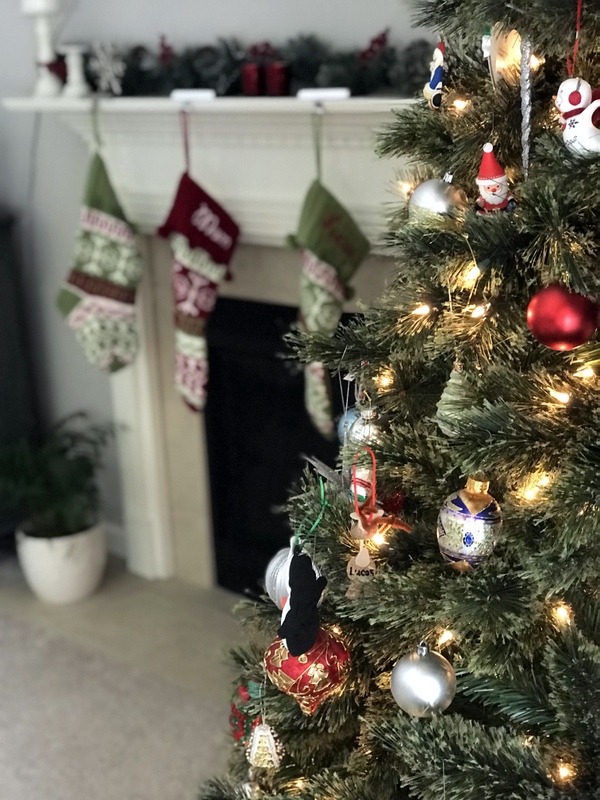 I also found this adorable sign from Michael’s on Black Friday that I snagged for $16!! We already have a sign that we usually hang on that wall, so I just swapped this one in and figured I’ll leave it up through the holiday season. 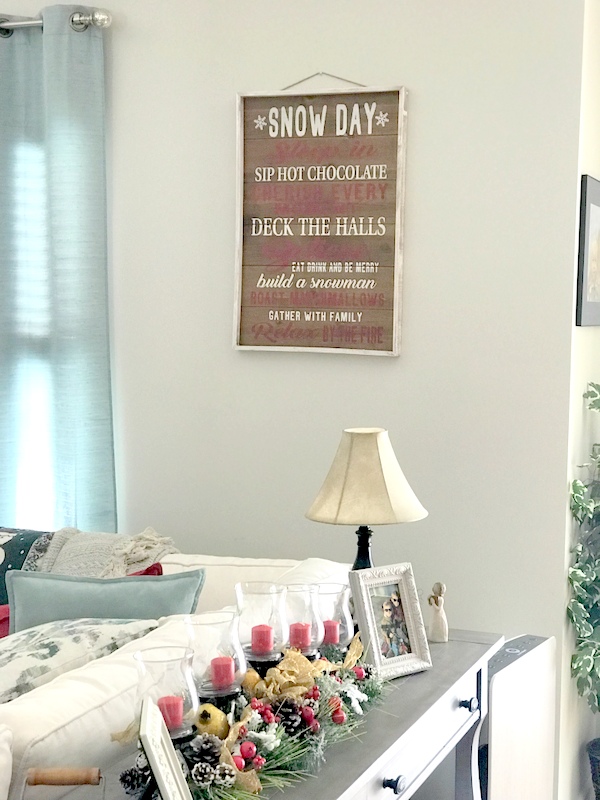 I also made a batch of my favorite Leftover Turkey & Veggie Soup on Friday and it was delicious, as always. SO easy!! (FYI, that is a such an OLD post that could use updating, but it’s too good not to share!) 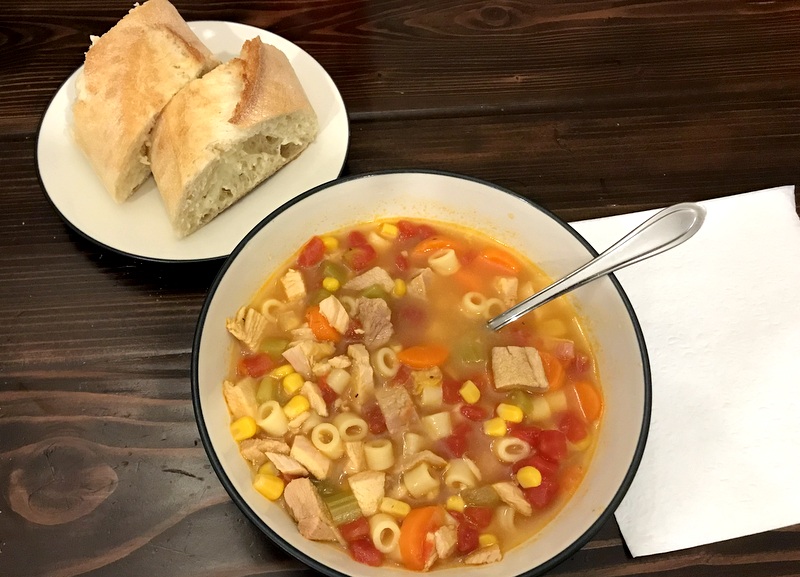 The rest of the weekend was really pretty low key; we hung around the house, played outside when we could, Lucas and Jay had a little date at Dave & Buster’s…overall, it was just a good weekend. I’m sad to see it end!

I also did a little Black Friday/Cyber Monday shopping, too. How about you guys?? I snagged a full size bottle of Hanami + two candles from PHLUR, a few new oils from Young Living, a new pendant light for our office (the same one as our mudroom!), some gifts for the boys, and a couple of other goodies from Beautycounter!

Side note, I have been blown away by all of your support with Beautycounter, so thank you, thank you, from the bottom of my heart. I truly appreciate it, and I am SO happy to see so many of you incorporating safer cosmetics and skin care into your routines! 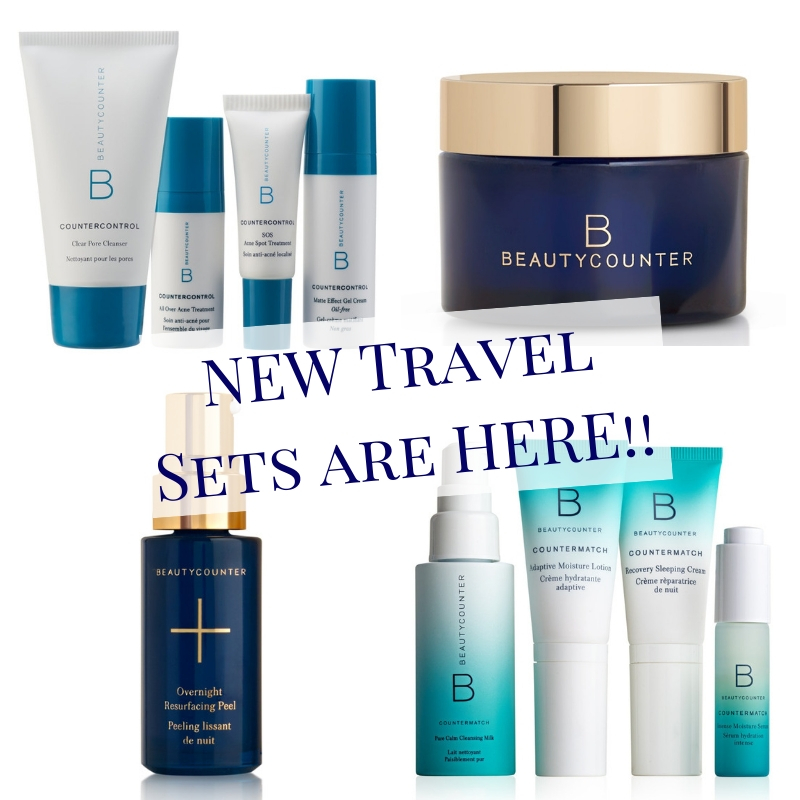 They are definitely NOT going to last long, so be sure to check them out! Today is also the LAST day for 15% off + FREE shipping on orders of $50+! PLUS, any orders that are placed TODAY (of any size) will be entered to win a free Charcoal Essentials set!!

As always, feel free to shoot me an email with ANY questions <3

« Deals + a Few of My Favorite Safer, Non-Toxic Products + a Sneaky Surprise
Something I Struggle With »