Talk about a nice little birthday present…Jay and the team got a big ‘ol “W” in the book last night! 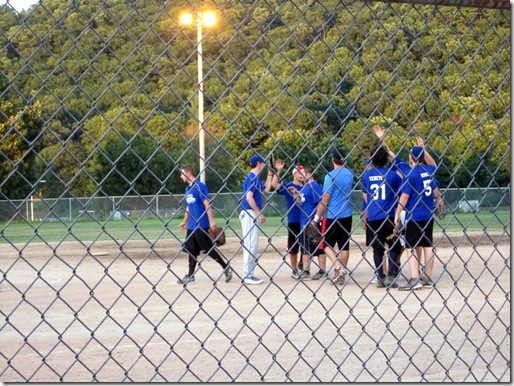 And Jay even got his second “win” as a pitcher. WOOO! Happy Birthday to YOU, Jay! 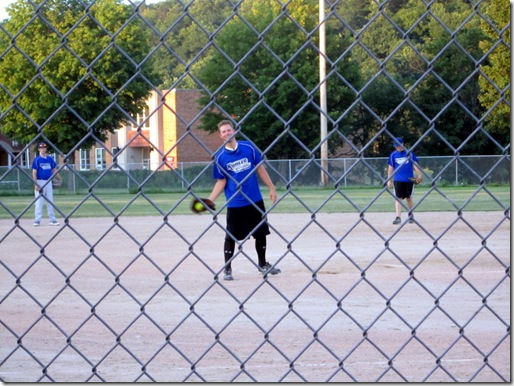 As always, the somewhat loyal fans were there to support and cheer them on. You may also notice Creeper Mike in the background…remember him from my mom’s birthday party? 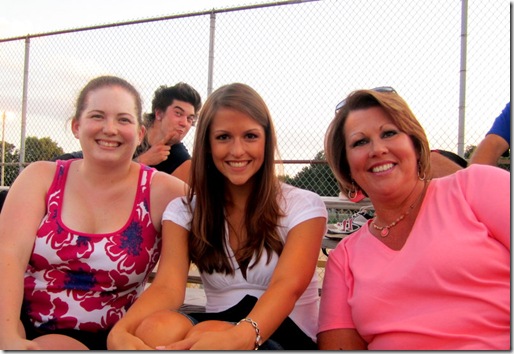 Apparently everyone was trying to creep in and photo bomb last night…thanks, mom! 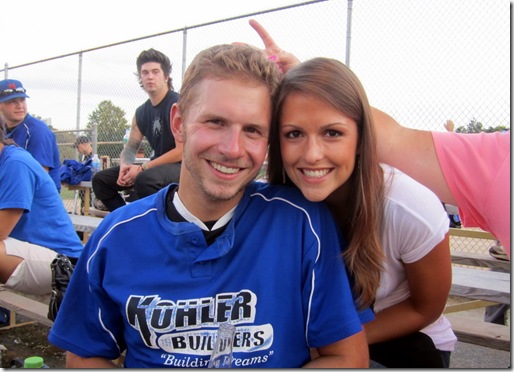 After the game, we headed out for a little tailgating, which I have missed so much this year. If you were reading last summer, then you already know that tailgating after the games was pretty much my favorite thing to do. This year, it’s been pretty minimal. 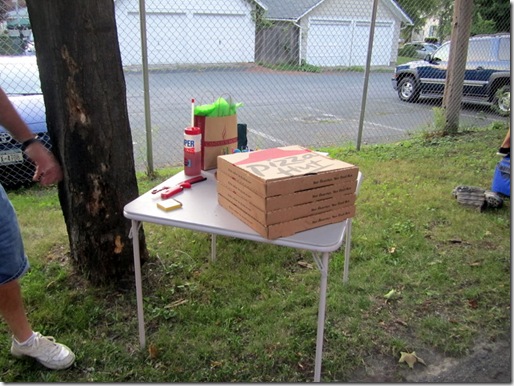 So I was pretty excited to be hanging out last night, even if it wasn’t my own softball game (that’s tonight). I enjoyed one piece of pizza, which I probably removed at least half of the cheese from. It’s been years since I last had Pizza Hut pizza but I don’t ever remember it being so cheesy??? Give me extra sauce and less cheese any day. 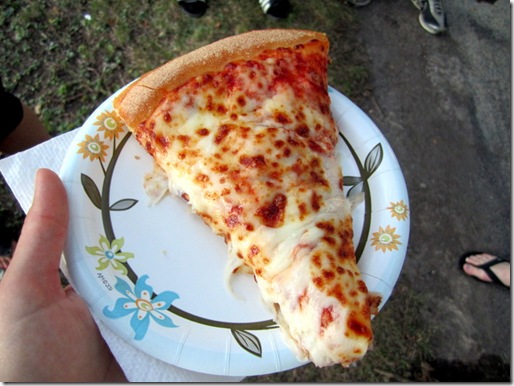 Of course, it was a birthday and all… 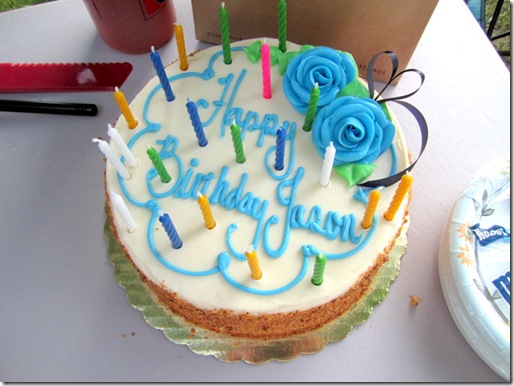 My in-laws generously provided both the pizza and the birthday cake to share with the team, and the cake was absolutely incredible. (For those of you who are local, it came from Zachary’s in East Greenbush- I don’t think I’ve ever had a bad cake from there!)

I savored every last bite of my piece in an effort to not go back for another. 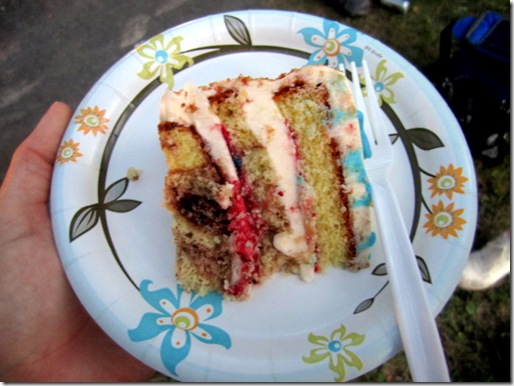 Overall, I think Jay had a pretty good birthday!

This morning, I woke up and headed down to the treadmill. I completed 38 minutes of an absolutely, crazy-intense workout which I will be sharing with you all later on after I type it up. Whew, it was a good one! 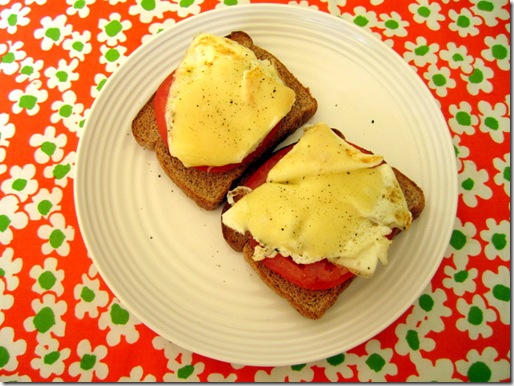 I was feeling savory this morning, so I toasted two pieces of whole wheat bread and topped them off with 2 egg whites, a slice of provolone cheese, and a couple tomato slices with some salt and pepper.

This breakfast really hit the spot! 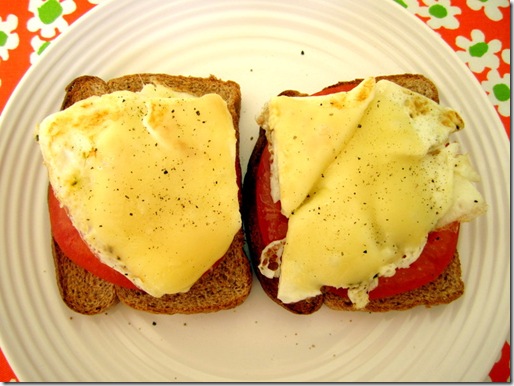 Of course, you can’t forget about the ketchup under there too. 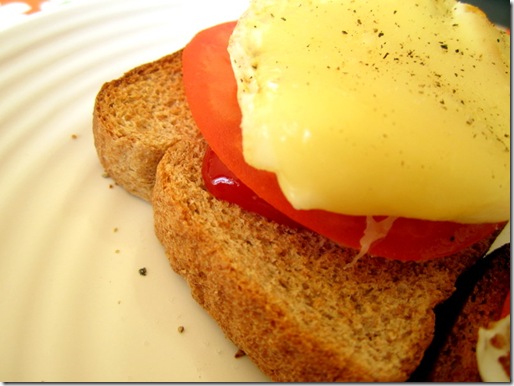 For the past five minutes, I’ve actually been enjoying this breakfast while sitting at my computer and watching Cody decide whether or not he really wants to sit in the window… 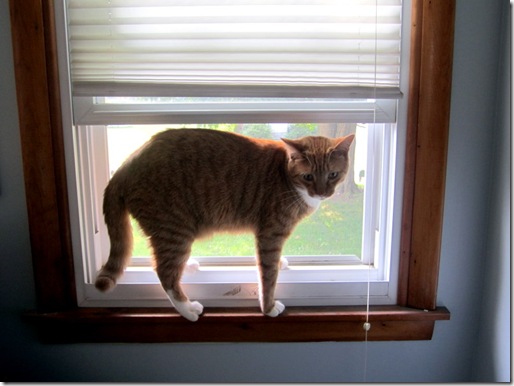 Or just play with the cord from the blinds. 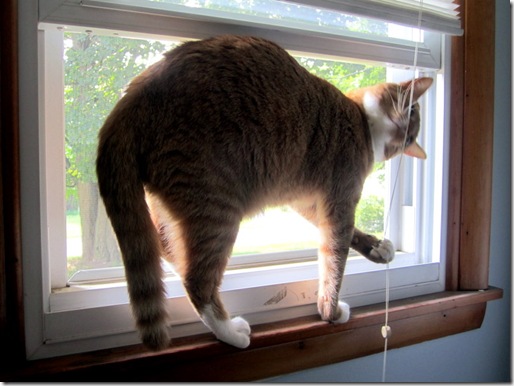 He just recently decided neither and is now laying, belly up, right next to me. What a ham!

Questions for the morning time!

« Full Of Tangents, Take Two
Let’s Discuss: Can Women Be Too Toned? »