Top ‘o the mornin’ to ya! I am sooooo excited it’s finally Friday. I don’t know about you, but this week seemed to take forever to pass, and I’m pretty sure that’s due to the fact that Jay and I have a pretty awesome St. Patty’s Day planned tomorrow. 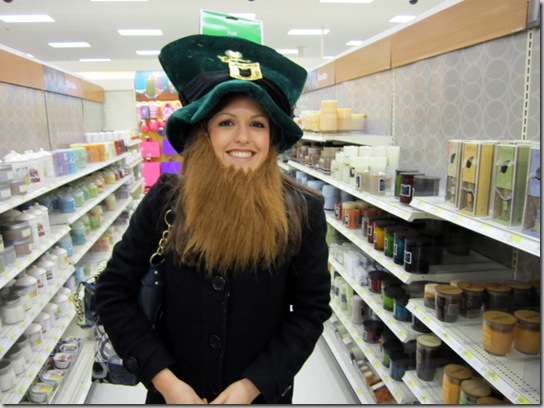 Good lord, I am a nutcase (circa St. Patty’s Day 2011 in Target). Can you tell we like this holiday or what?

We’ll be heading over to our friends’ Sarah & Jeff’s place for the annual Kegs & Eggs Shenanigans party which, from the sounds of it, is going to be quite a blast. Tonight, I have plans to make a batch of my Overnight French Toast (request by Sarah) some sort of green treat (I’m nixing the Irish Cream cupcakes – I know they won’t get eaten), as well as some “special green jell-o” (wink, wink).

By the time I got home last night from wedding dress shopping with Mal, it was already time to make some dinner. I had already known that Jay was working late, meaning I was on my own dinner, which had me immediately craving one thing:

Breakfast for Dinner! Or, shall I say, “Brinner?”

Over the weekend while I was hanging out with the girls, I wound up getting a dozen eggs from my friend Kathryn, who actually raises chickens at her house. I’ve been anticipating these eggs ever since she first got the chickens, so I was super psyched to be able to finally get my hands on some. I’d never had farm fresh eggs like that before! 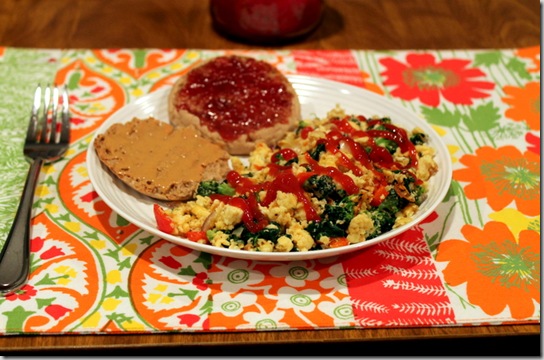 I used one egg + two egg whites to make one heck of a veggie scramble, complete with a wedge of The Laughing Cow Light Swiss Cheese (scrambled right into the eggs), red peppers, onions, tomatoes, broccoli, and fresh spinach. It was probably one of the best scrambles I’ve ever made, and I’m attributing its success all to Kathryn’s chickens. Those bad boys know how to lay a mean egg. 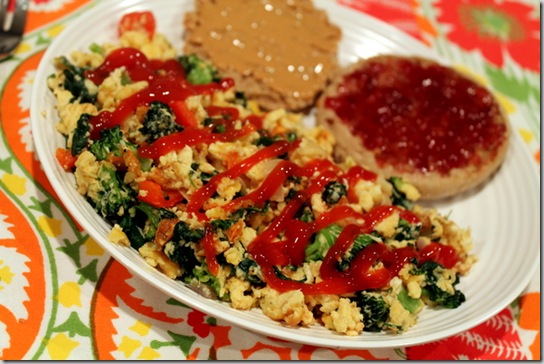 On the side, I had a lightly toasted whole wheat English muffin with peanut butter and Raspberry Polaner All-Fruit. 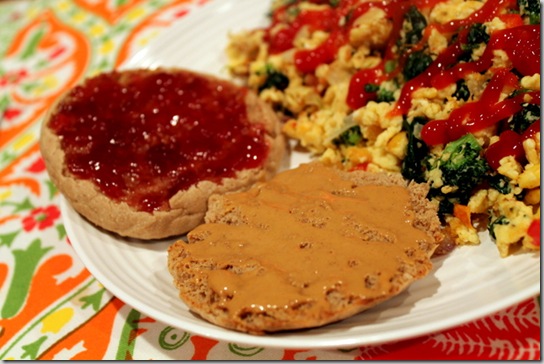 Breakfast food is seriously the best, isn’t it?

This morning, I had an early shift at work, which also allowed me time to get my planned Bootcamp workout in for the day. Today was another round of last Friday’s workout, and I’m not ashamed to say that it was just as hard. Functional Training is no joke!

I was on top of my game last night and was actually thinking ahead, so I put together the beginning stages for a batch of Voluminous Oats. 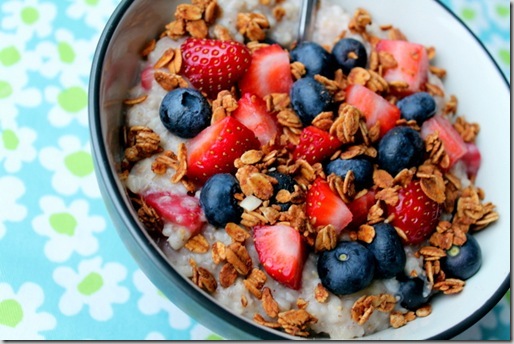 However, by the time I got home this morning and finished cooking up the oats, I was wayyy too hungry to wait to take pictures, so you get a recycled one today.

Oddly enough, that picture there looks pretty much like an exact replica of today’s- lots of berries, granola, and fluffy oats. Yum!

Hey, guess what? I’ve actually got a Fashion Friday post comin’ atcha this afternoon. It’s been quite a while!

If you could pick any five foods to get fresh from a farm/garden/etc. (not from a store), what would they be?

« The Highlight Of My Day
Four Random Thoughts »