Despite the fact that I had somewhat of a shit-tastic week, I did still manage to have a few good laughs and smiles thrown in the mix. Hey, you’ve gotta try to see the positive even when things are at their worst, right?

My friends. I have some of the best friends a girl could ask for. Seriously.

And just the simple act of mailing an actual card? It’s just so thoughtful (and somewhat rare nowadays, wouldn’t you say?).

This week it REALLY, officially became fall…and it is beautiful outside.

Let’s just forget about all the leaves that need to be removed from my own yard.

Sitting at the bar with Jay earlier this week, sipping on some Octoberfest.

The fact that I managed to run four different times this past week. FOUR. Granted, they were only between 2-4 miles each time, but I just can’t even begin to tell you how good it felt.

I don’t intend to fully incorporate running back into my routine just yet, but for this week, it was wonderful.

I was going through all of my old photos on Facebook the other night and came across this oldy but goody.

Me and the Little Bro. God, those were some great cheeks, weren’t they?

There were a few Pinterest finds this week that weren’t necessarily of the humorous variety, but they definitely did make me smile.

Of course, there were also quite a few funny ones added to my Makes Me Smile Pinterest board too, which we can’t leave out…

And last, but not least, early this morning, Jay and I left the house to meet up with my parents so we could head down to Jets stadium for the day! 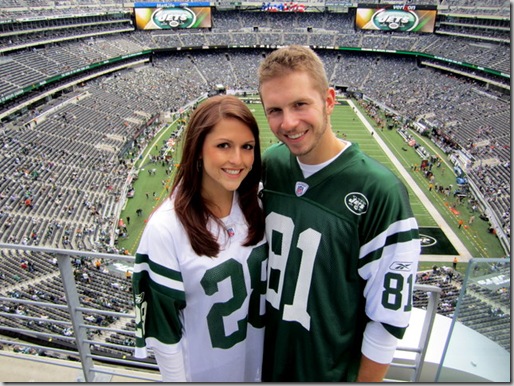 You guys know I do love me so tailgating…now let’s just hope that the Jets can actually do something. Wishful thinking? Probably.

What’s making YOU smile this week?