**Hey folks! This is actually my first chance getting onto wi-fi this weekend, but so far everything is GREAT! Just finished up an awesome bootcamp and now we’re headed down to some breakfast. But first, let me fill ya’ll in on yesterday’s post…Happy Cinco de Mayo!!**

I still can’t believe it…I, the self-proclaimed worst packer in the entire world, managed to get all of my belongings into two carry-on bags. Talk about a victory! 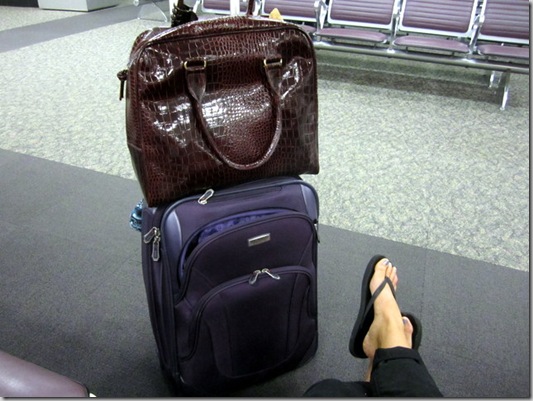 I was up bright and early this morning (actually, just early…it’s nowhere near bright at 4:00am) so I could head off to the airport to catch my marathon of flights for the morning. Almost as soon as Jay dropped me off, I found Scott, who you may remember is my flight guru from last year. 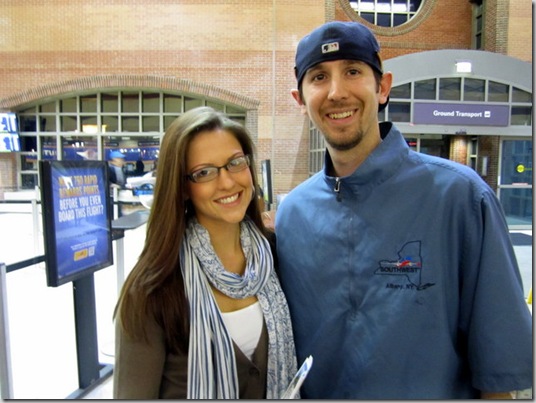 Scott was able to hook me up big time with my flights this morning, so I definitely owe him one. He’s pretty awesome…and you can even find him on Twitter too (@NYSkirt).

Once I picked up my boarding pass and all that jazz, I headed up to go through security, got my Noxzema taken away from me (damn, it was worth a shot), then went on over to Starbucks for a little morning caffeine. Blond roast + 1 pump vanilla syrup + skim milk. Becoming a new favorite, I’ll tell ya. 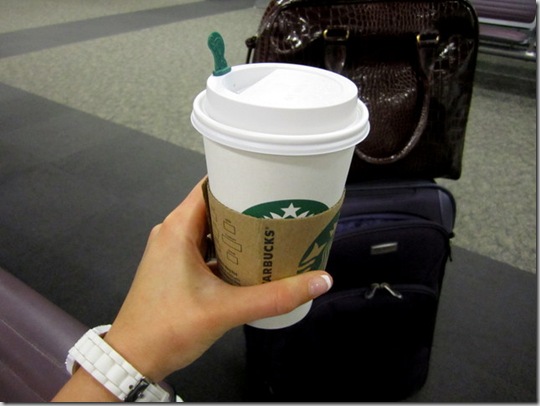 So about ten minutes into my first flight this morning, I realized that I had totally forgotten to take my Dramamine. I tend to get pretty awful motion sickness (remember this past summer?) so I always have it on hand. Of course, I panicked as soon as I realized this, which of course made things worse. Thankfully, the flight was only about 90 minutes long, but it was a tough one.

I had about 25 minutes to hang out in Baltimore before I had to board my next flight, so before anything else, I made sure to hit up the gift shop and grab some Dramamine, downed it immediately, and also picked up an interesting little snack. 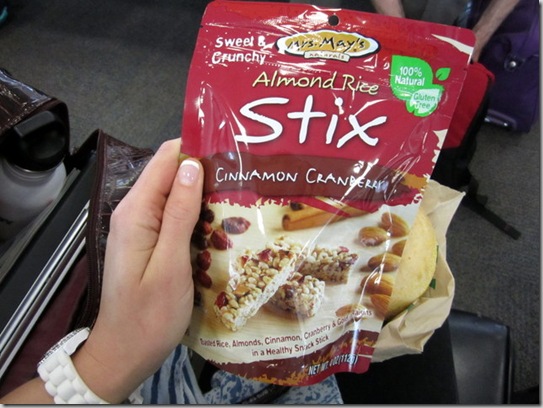 They were pretty good, my friends. Pretty darn good.

Of course, I needed more than that, so I broke into some of the other food I brought with me. I had picked up a bagel from Starbucks earlier this morning (I ordered cinnamon raisin and the stinkers gave me plain), so I snacked on half of that, a (very brown) banana, and a packet of almond butter. 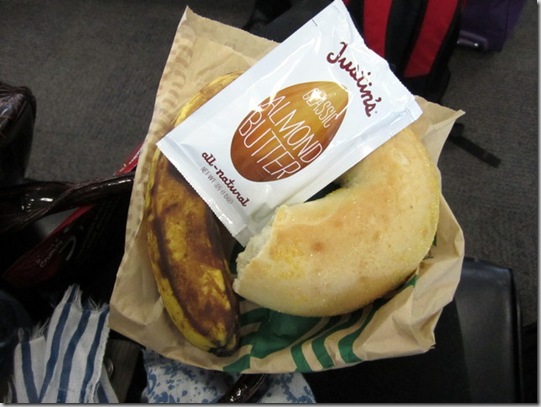 I was hopeful that the food would do a little something for my nausea, but no luck. By the time I boarded my next flight, which was headed to Milwaukee,  I was pretty certain that there was no way I was going to make it through the flight without ralphing (sorry, gross, I know). The turbulence on that flight was unbelievable, but somehow, someway, I managed to hold it together.

My third and FINAL flight for this morning had me staying on that same plane and just waiting it out until the other passengers boarded. By now, my Dramamine had kicked in and this flight was MUCH more bearable. I was even able to sleep for a little more than half of it. WOOT!

So I’ve finally arrived in Colorado and have been chugging water like its my job.

I’m determined not to let this elevation change get to me!

Now, I’m just chillaxin’ here in the airport, waiting for my gal Alyssa to get here, and then we’ll hopefully grab some lunch. It’s wayyyy past my usual lunch time.

Hope everyone’s Friday is off to a great start, and is gearing up for a fun weekend!