WOO HOO for the weekend! For the first time, probably since Mexico, I woke up this morning actually feeling refreshed and awake (then again, I guess that’s what almost 10 hours of sleep will do for you?). I never got a chance to check back in with you guys yesterday, but I really do have to share some eats because they were goooood.

Since our Thursday night was a bit later than normal, I didn’t give myself enough time to make a lunch, but used it as a good excuse to head down the road on my lunch hour and pop into Panera. 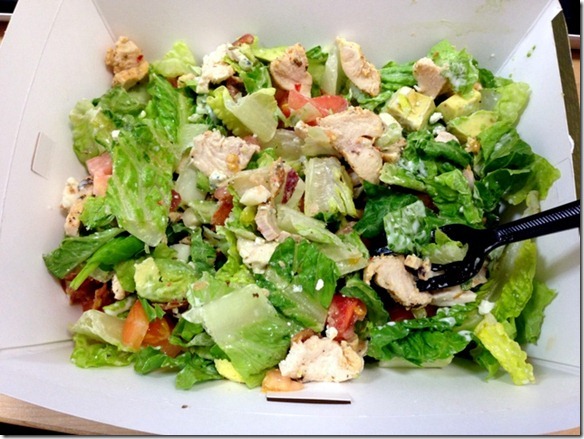 I ordered what may be my current favorite of theirs, the Chopped Chicken Cobb with Avocado salad. Oh…my…gawwwwd, the thing is incredible. And actually quite filling, I might add. So much so that I didn’t even eat again until dinner at almost 7pm last night…and that’s rare for me these days!

Speaking of dinner…you guys know that nine times out of ten, Jay and I are eating out on a Friday. We’re spent, we don’t feel like cooking or cleaning, and we just really do enjoy eating out. Well, last night we decided to switch it up and stayed in…and I’m so glad we did. 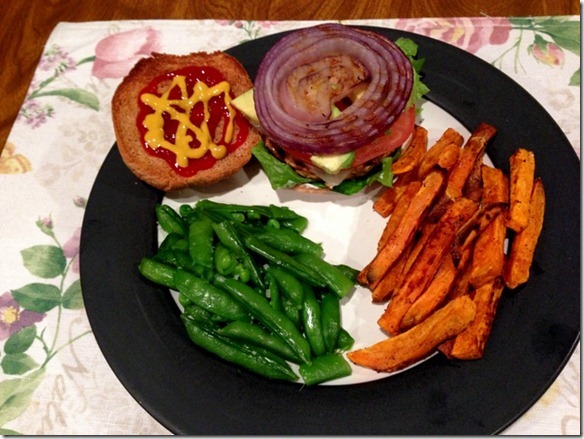 On the menu was burgers (regular for the boy, veggie for me), homemade sweet potato fries, and sugar snap peas.

Everything tasted incredible, but the veggie burger is what stole the show. In fact, there was so much loaded on to that thing, that admittedly, I could hardly taste the burger itself. 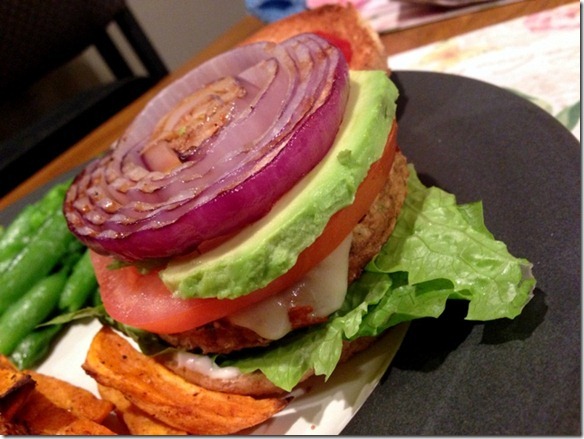 settled in on the couch and popped in the Redbox movie that I picked up after work. Unfortunately, it wasn’t really enough to catch my attention (some weird movie with Bruce Willis and Catherine Zeta-Jones, who looked like she lost about a gazillion pounds?!?) and I was zonked out by at least halfway through. I tried asking Jay how it ended, but he told me “you didn’t even see the rest of the movie, so why would it matter how it ended?”

This morning, I got working on a couple of things around the house before settling down and making a pretty kick-ass breakfast. Would you guys believe that the last time I had this combo was way back in October?!? I know. I can hardly believe it too. 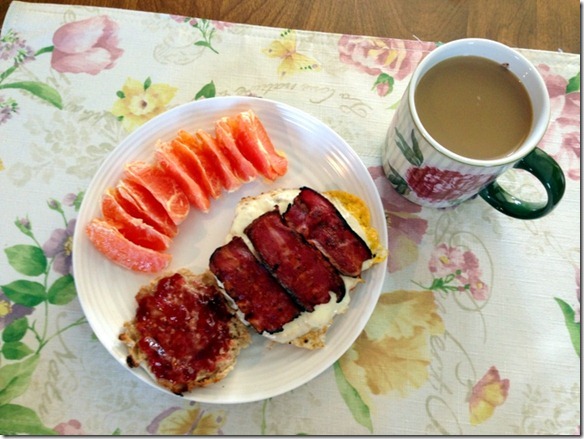 But then again, I guess that’s what happens when you give yourself ZERO time to make a breakfast at home before work in the mornings. I’ll take the blame on that one.

Today’s egg sammy came loaded on a honey wheat English muffin, topped with provolone cheese, turkey bacon, and raspberry jam. I had a cara cara orange on the side for a little extra sweetness and man, everything really hit the spot. 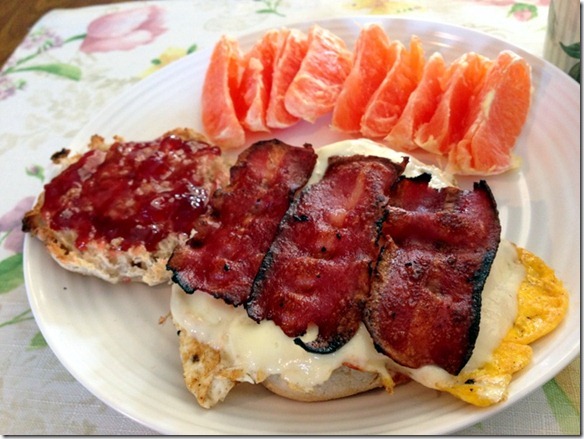 I’d have to say I’m definitely three for three on my last three meals…hopefully I can keep the streak going a little longer!

Today Jay and I have a bunch of stuff on the agenda, including a little cleaning, a little last minute shopping, a trip to Babies R Us (never made it last night, lazy bums that we are), and some cooking. I’m also hoping to maybe squeeze in a quick workout, since they’ve been sort of non-existent this week…we’ll see what happens! 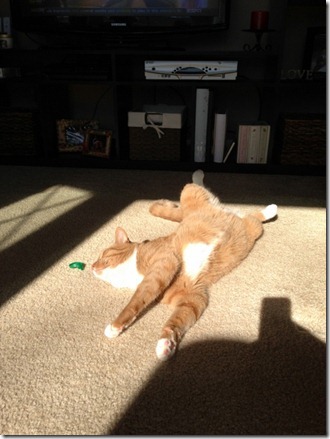 Hopefully, you all get a little time to relax over the weekend just like this little guy is this morning.