I started off yesterday thinking I was going to make today’s post a WIAW post, but as I got about 2/3 of the way through the day, I realized I had already missed taking pictures of at least three different things. Oops.

So I suppose today’s post could be somewhat of a pseudo WIAW post, except, it’s missing quite a few things. Ya know…it happens.

But the day was a typical Tuesday; not too exciting, and it seemed to draaaaaag. Seriously, what IS it about this day of the week?! I managed to roll out of bed early enough for a workout (21 Day Fix Upper Body) after having skipped out on Monday. It definitely felt great to start the day off on the right foot!

Shortly after I got to work, breakfast was consumed: Mini Frosted Shredded Wheat + banana + almond milk and coffee. 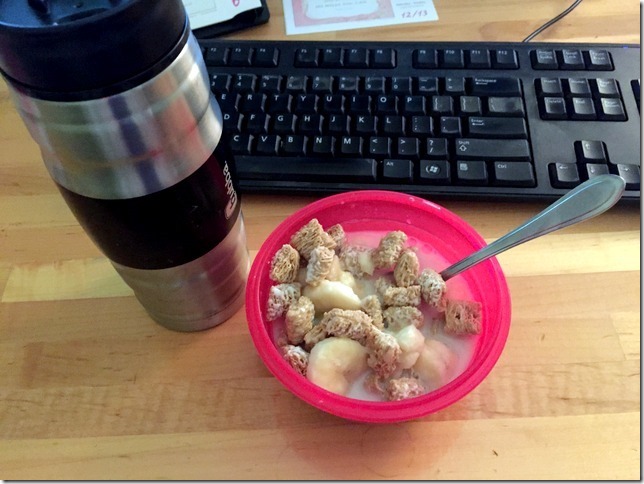 I think it’s also worth noting here that I’ve managed to go almost a full week without buying coffee. Okay, actually now that I think of it, it might only be like 3 work days, so I take that back. Maybe I’ll be better this week?

There were a few snacks consumed after breakfast, since the bowl I packed was a bit smaller than I realized, and then it was on to lunch. It was sad and lame, and also way too small, but it was all I could manage to grab as I was running out the door ridiculously late that morning. 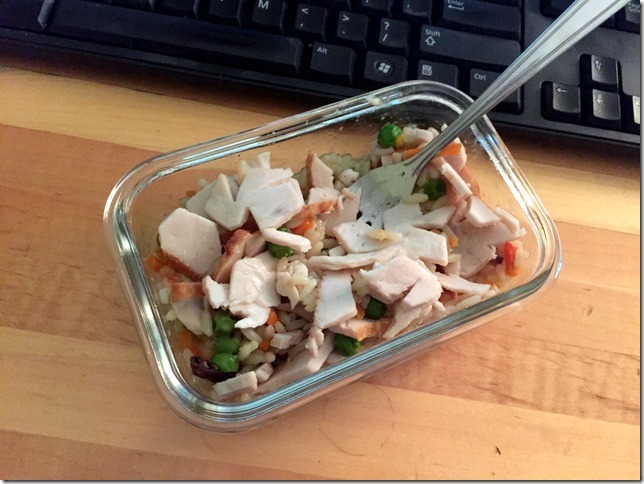 It was a mix of thick-sliced deli turkey + some leftover rice, peas, carrots, and mushrooms. It was okay, but certainly not very satisfying.

It wasn’t long after that when I found myself in my co-workers candy jar. She’s always got some seriously GOOD stuff. 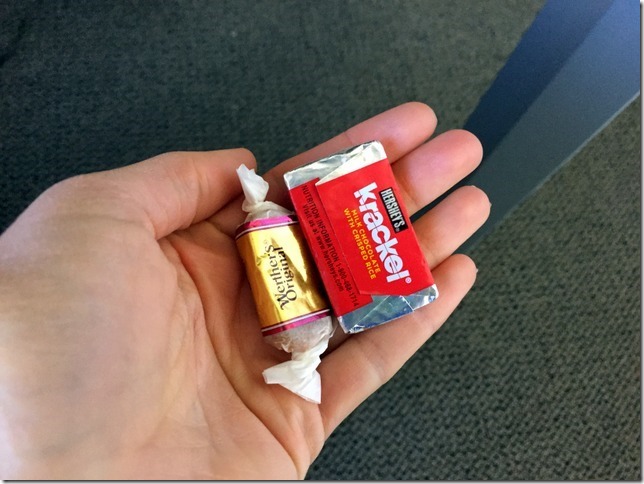 Krackel = forever my favorite out of the bag of Hershey Miniatures. What about you guys?

Later in the afternoon I found myself digging into my peanut butter jar, and also grabbed a few handfuls of blueberry almonds. 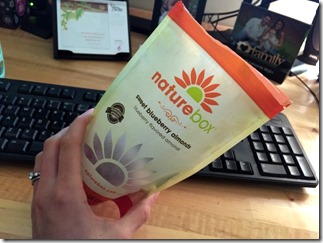 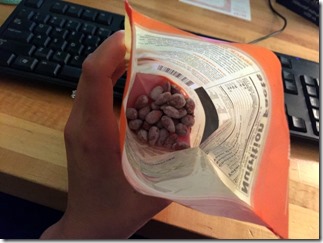 I’ll tell ya…packing a substantial lunch makes SUCH a difference. Note to self: get my act together for the rest of the week!

About 17 hours later, the work day was overrrrr. 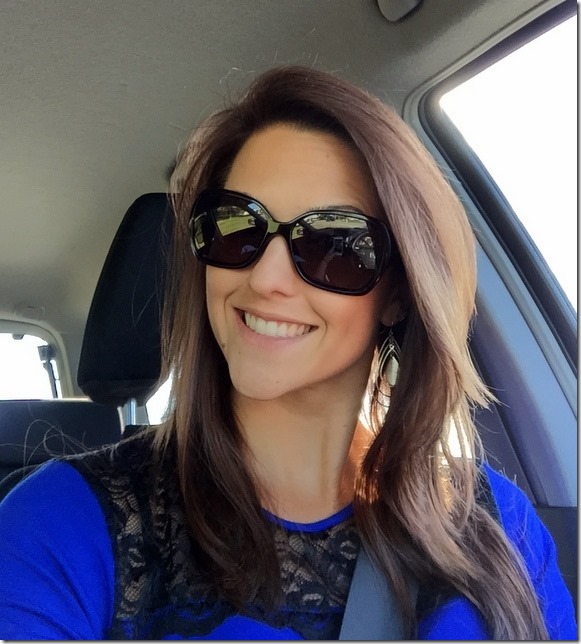 And, side note, I am LOVING this new top I got last week from Stitch Fix! I can’t wait to share the rest of the details of my fix, hopefully tomorrow.

Once I got home, I chatted with my mother-in-law who was watching Lucas for the day (she watches him on Tuesdays) and got me caught up on his day. I also discovered that a rug I had ordered from Wayfair (this rug) was delivered a couple of days early (YAY!) so I played around in the office to try to figure out how to arrange things. As of right now, I still can’t figure out a way that I really love it…I’m terrible with this stuff. 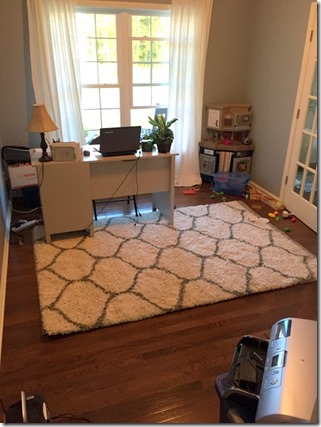 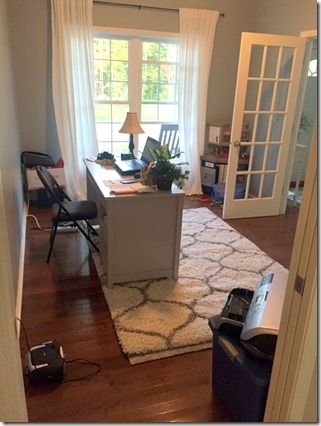 Oh, and disregard the mess and and random rug pad sticking out.

I think a bigger rug might look better(?), but the next size up in this rug won’t fit under the doors. Ay yi yi.

And as for the title of today’s post…I have officially put grocery shopping off for three days now. And I still have no desire to go. 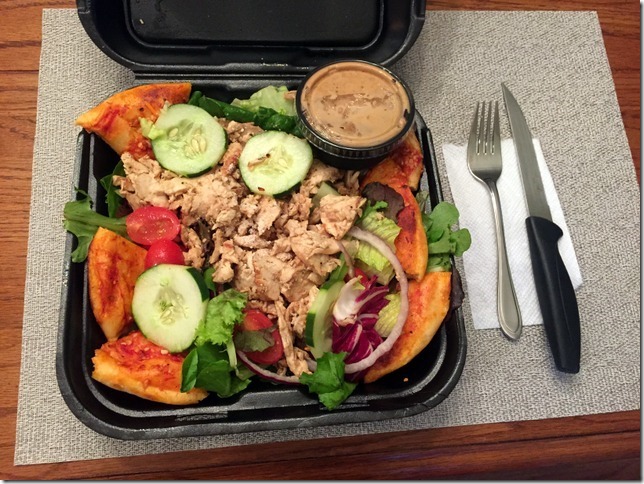 So last night, we ordered grilled chicken salads for dinner because, well, we ate Dino nuggets the night before that that’s really all we have right now.

And then we all hung out together while Lucas got his 20 minutes of iPad time (he’s become obsessed with it lately, so we’re trying to only let him have 15-20 minutes before bedtime – it’s a struggle). 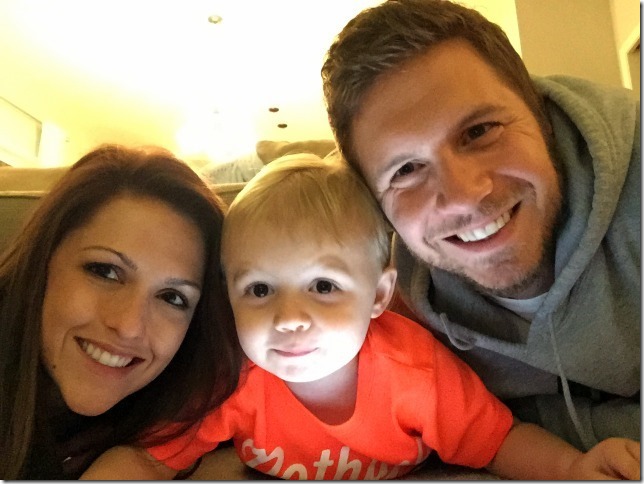 Once tubby and bedtime were taken care of, it was couch time with Jay to catch up on the day and watch a recorded episode of Quantico. Are you guys watching this show?? It’s GOOD!

Happy Wednesday, everyone! Make it a great one <3

Some Fun Reads for Your Wednesday

Kid Friendly Crockpot Breakfast Recipes
Cheerios Recall Alert!
How (and Why) Pediatricians Are Changing that Strict No-Screens Rule
24 Freezable Dishes to Bring to New Moms
The Actual Reason Children are 800% Worse When Their Mothers Are in the Room (so THAT’s why! Sheesh!)

« All About Having Fun
October Stitch Fix Review »