Even though it was really just a night out to dinner, it just makes it seem so much more exciting to call it Date Night, don’t ya think? ;)

We were really having a difficult time deciding where we wanted to go (which is no surprise for us), but I wanted to try somewhere new. I got a couple great recommendations for Date Nights to come, but last night I ended up picking a totally different place: Franklin’s Tower. 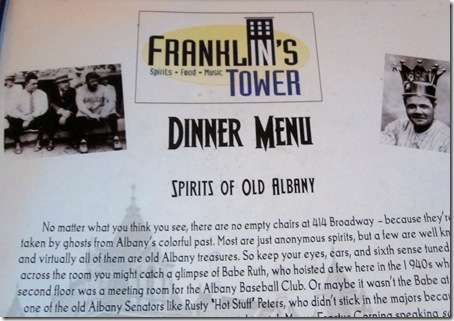 I’d heard many good things about this place, but hubby and I just never had the chance to make it to Downtown Albany to give it a try. Supposedly, it’s haunted! :shock:

I had no idea what to expect, but was immediately impressed upon walking in. The inside had a pretty cozy feel, but not too “stuffy” if you know what I mean. 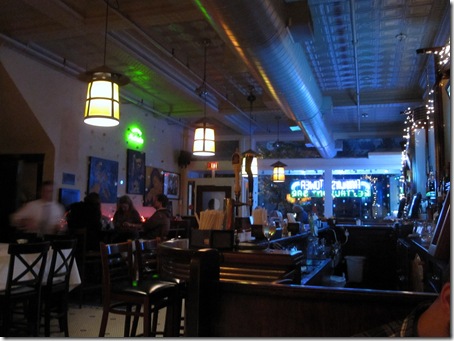 The lighting, however, was not too cooperative with my little camera…a little on the dark side! I didn’t mind though, because I love that type of ambiance when I’m dining out. ;) 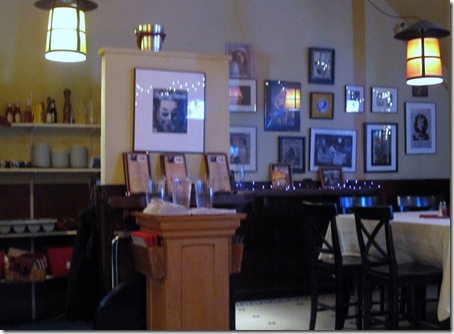 Hubby started out with a delicious Octoberfest brew. Isn’t he handsome? :mrgreen: 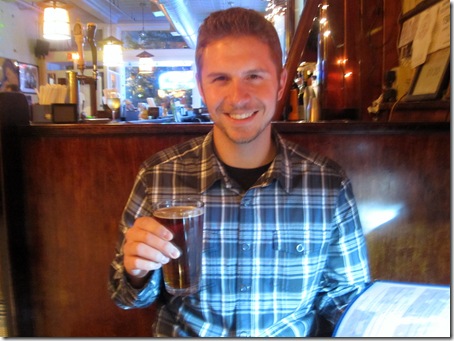 While I started off celebrating Date Night with a glass of vino. 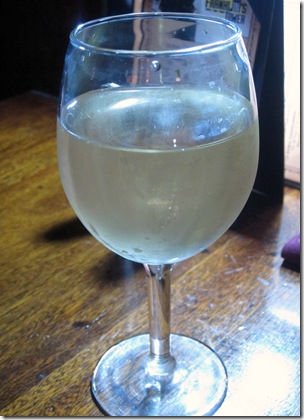 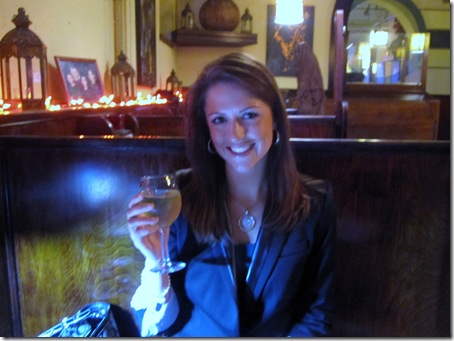 Before we even got to the restaurant, I already knew what I wanted as an appetizer (thanks to my uncanny obsession with stalking restaurant menus online) 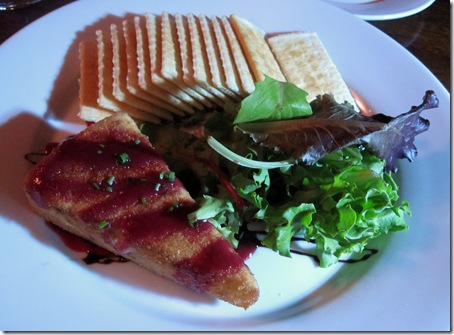 We ordered the Fried Brie, which was served with a raspberry puree, balsamic reduction and assorted crackers. 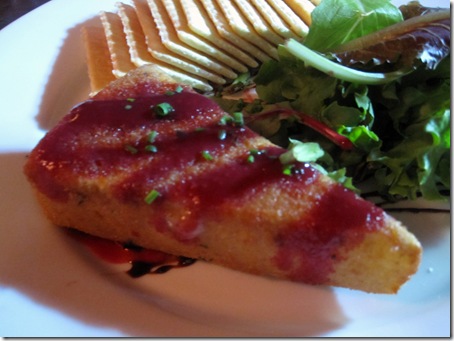 I only had one or two crackers, but only because the brie was good enough to eat on its own. It was amazing! I absolutely loved the addition of the raspberry puree & balsamic. They complemented each other perfectly. 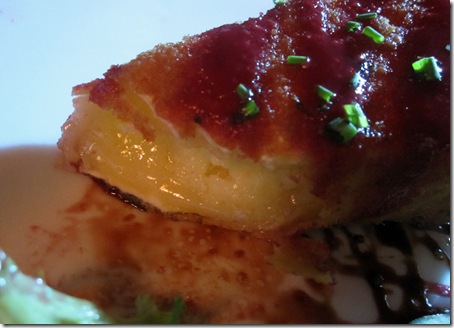 Next, to our surprise, we were served some house salads. Who knew! The dressing on this was great. Not sure exactly what it was though; almost tasted like a creamy balsamic? Again, sorry for the blurry photos… :oops: 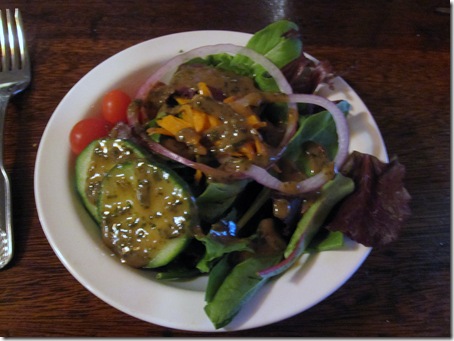 My entree for the evening was something I’d never tried before! I figured “Hey, I’m at a new restaurant. Why not try a new dish?” Let me just say…I’m so glad that I did. And can I also just say how excited I was that I finally figured out how to fix the lighting at our table so my photos looked halfway decent. WOO HOO! 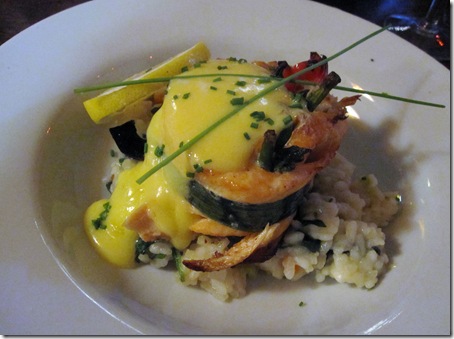 I ordered the Salmon Oscar: “Atlantic salmon stuffed with fresh lump crab meat, asparagus and red pepper, wrapped in leek and served with hollandaise sauce. Served over a bed of spinach risotto” 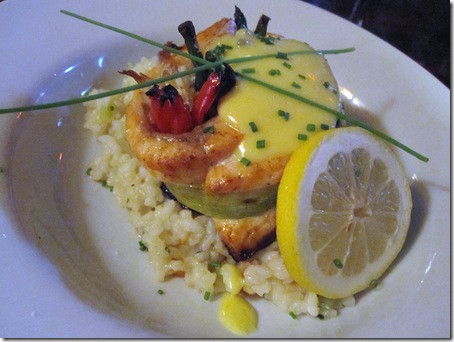 It was probably one of the best salmon dishes I’ve ever tasted! The salmon + crab meat, combined with the hollandaise were extraordinary. Perfectly cooked, subtly seasoned, yet just enough to bring the entire dish together. The risotto was rich and creamy, but not too heavy. Absolutely amazing! We were both pleasantly impressed by our visit to Franklin’s Tower! :-D

And as if we hadn’t already eaten enough at dinner, we decided to stuff our faces just a little more. On our drive home, I convinced hubby to stop by a local cheesecake place that I’ve been hearing rave reviews about for years, yet I’d never been to: Cheesecake Machismo. 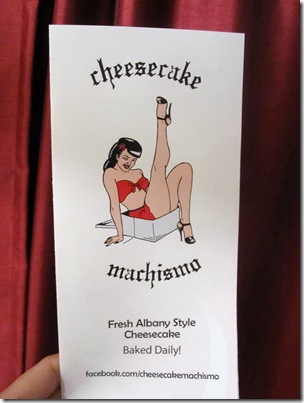 Thankfully for us, we got there just as they were about to close. The girl who was working nicely let us in after I flashed her a big ‘ol smile, telling her it was my first time visiting. (Hey, I don’t care if it was cheesy, it worked!) ;)

Cheesecake Machismo has a huge variety of cakes that you can order in full, or they also have different varieties available by the slice which vary from day to day. 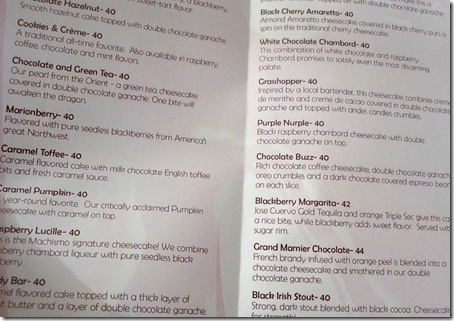 We went in to Cheesecake Machismo planning on choosing one slice and splitting it. However, we somehow ended up with both of these… 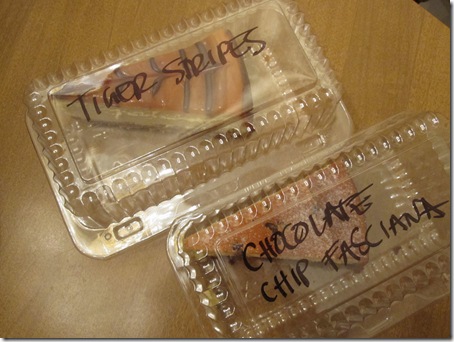 Hey, it was Date Night. Apparently just an excuse to stuff my face.

One slice was the Tiger Stripes, which was a mix of Kahlua + caramel. 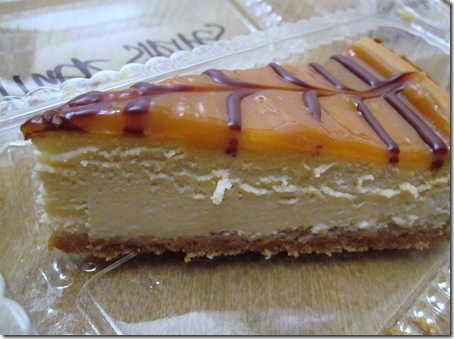 It’s one of their signature cakes…I can totally see why. WOW! 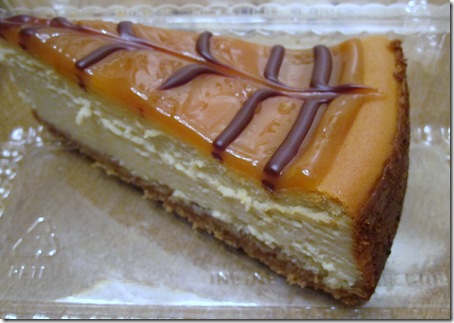 The second slice we ended up choosing was their Chocolate Chip Fasciana, which is a vanilla caramel cheesecake with tons of mini chips on top of a chocolate chip cookie crust. 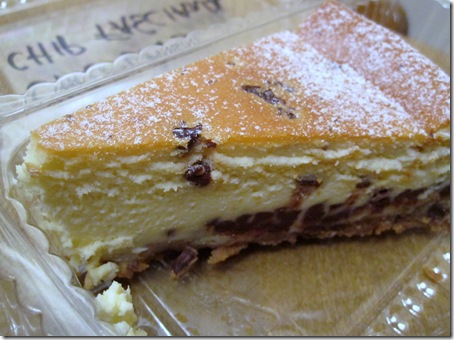 All I’ll say about this bad boy right here? If I had to eat a slice of it everyday for the rest of my life, I would by no means be upset. It was outstanding. 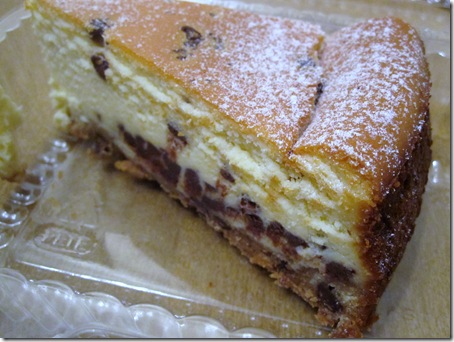 …but we definitely devoured them both.

And then we were stuffed.

And thus was a terrific, delicious, “food-coma-esque” Date Night! :-D