All I can say is thank goodness my appetite came back for dinner last night, because there was some good stuff happenin’ between our kitchen and grill last night! 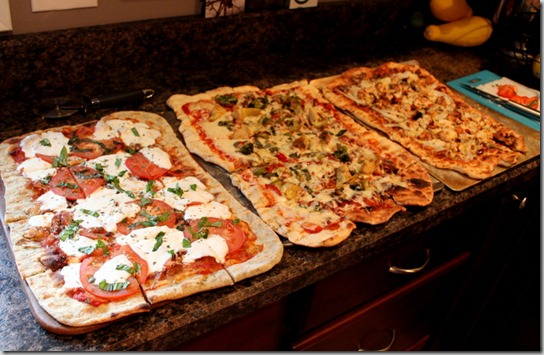 Our good friends Joe & Kate came over right after work for an evening of pizza on the grill (we’re such creatures of habit) and hanging out by the pool. They brought over a yummy veggie platter and some crackers with a walnut and feta dip, so we all munched on those while working on the pizzas. 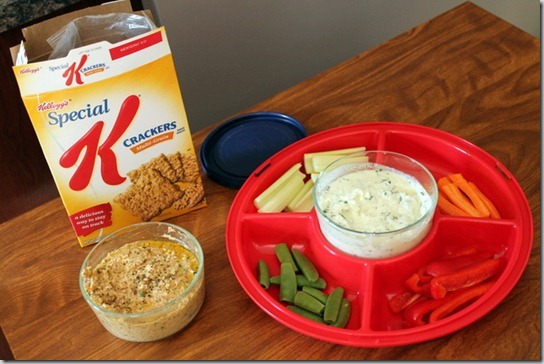 Usually when Jay and I make a pizza for ourselves, we cut a typical dough into two and just make two different types of pizza. The dough I got yesterday, however, appeared to be a bit smaller, so for some reason I figured I should get three balls of dough: two regular and one garlic and herb. 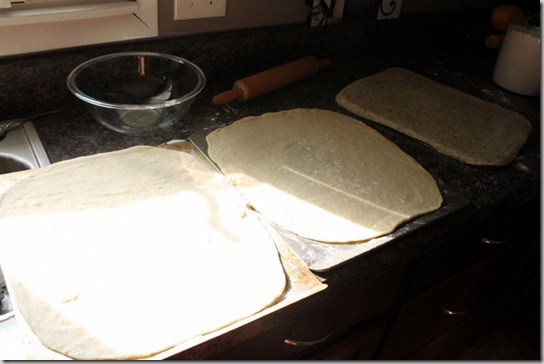 As it turned out, the dough really wasn’t much smaller than usual, so we had quite the abundance of pizza! 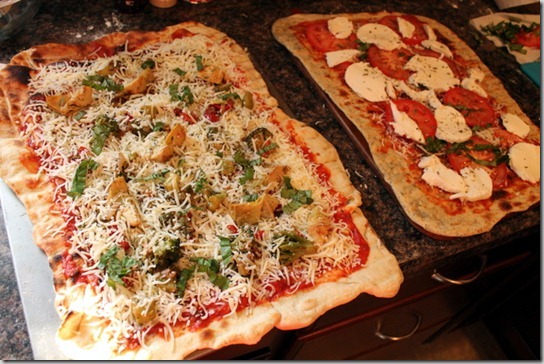 Coming off the grill…

Because our pizzas were so large, we had to cook them one at a time, but by the time all three were done? Mannnn, did I want to dive in head first!

We had a veggie pizza, with peppers, onions, broccoli, and artichokes. 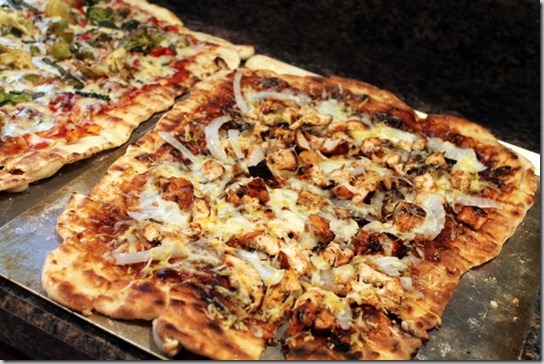 And, my favorite, a white pizza (well, almost – I put a teeny bit of sauce on) with fresh tomato slices, fresh mozzarella slices, and basil from the garden on the garlic and herb crust. 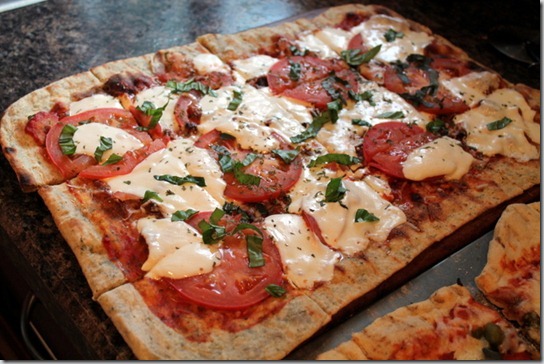 Because it was such a nice evening, we all dined out on the patio, and as I was coming back outside, I could not help but notice the fact that each and every one of them was taking a photo of their food. This grilled pizza was plastered all over Twitter, Instagram, AND Facebook last night. LOVED it! 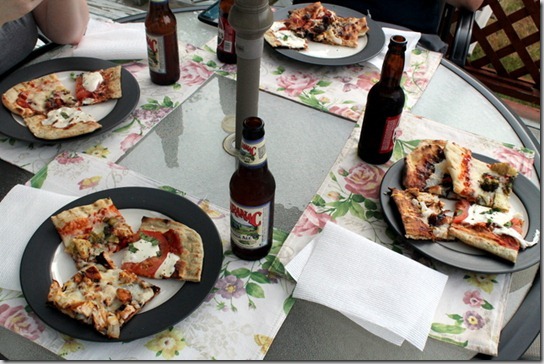 I started out with a slice of each, but I was seriously ravenous and those three just didn’t cut it, so I went back for more. 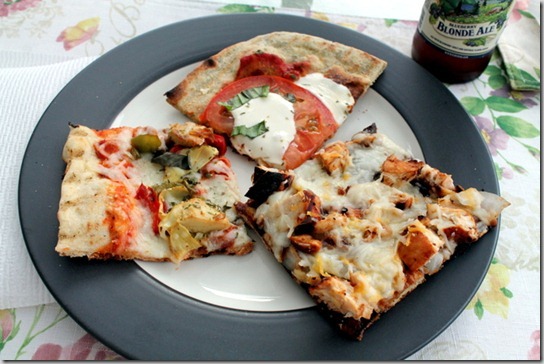 My appetite had definitely come back in full force and was making up for lost time from earlier in the day. Wow.

After dinner, we headed out to hang out poolside. Well, poolside for me…in the pool for them. I don’t know what it is, but I’m not much of a pool person after dusk. I’d rather have the sun beating down on me to be swimming.

So while they enjoyed the pool, I manned the poolside brownies.

I threw together a box of low-fat brownies (in my latest baking pan!) and topped them with a homemade vanilla cream frosting and some cherry cordial M&M’s (I had the bag leftover from Christmas). They were goooooood.

While we were all hanging out by the pool, we got talking quite a bit about Twitter. Joey was saying that he doesn’t have too many people following him, so I thought it’d be fun to see how many people we could get to follow him today! His twitter name is @jman0312, so if you feel so inclined, go ahead and give him a follow. He’s a cool cat.

Even more important, however, is the fact that Jay has finally decided that he needs to suck it up and join. We always joke around and give him a hard time for not being on it and being so “out of the loop,” so I think he finally had enough of our bantering. But here’s the fun thing…

We all decided that it would be fun to have YOU determine this guy’s Twitter name fate. 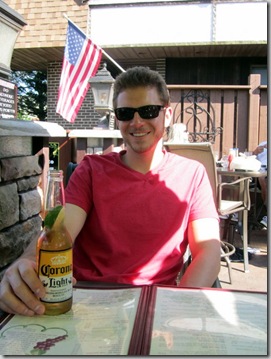 Between the four of us, we came up with three different possibilities, and whichever one ends up getting the most votes, he agreed to make that his Twitter handle. So here’s the choices:

One of those choices was my creation, but I’m not allowed to say which one. Oh yes…and another one of the choices is also not meant to be vulgar – “Effen” is a brand of vodka that Jay enjoys.

Sooooo…will you help us choose a Twitter handle for Jay so he can finally jump on the bandwagon?