Read below for my review of the VTech Safe & Sound Baby Monitor + news on a fun Twitter party later this week!

Timing can be a funny thing sometimes. About a month ago, Jay and I were talking randomly about kids and baby things, and things that we’re still going to need whenever baby #2 comes around (I know I’ve mentioned this more than once lately but, no, I’m not pregnant…I promise). Anyway…

One of the things that I said we’d probably need is a second baby monitor. Jay looked at me like I was crazy, saying, “Babe, we have a monitor.” To which I proceed to respond, “Yes we do, but I don’t intend to stop stalking Lucas while he sleeps whenever another baby comes along.”

I’ll admit, it got me thinking for a bit. I mean, am I crazy? Personally, I want to keep a monitor in his room until he goes off to college (kidding…maybe) but really, when do parents typically decide, okay, we can ditch the monitor?

Regardless, it was safe to say that we were still going to need a second monitor somewhere down the road. And then, the very next day, I open my email inbox to see an email waiting for me…asking if I’d be interested in reviewing a new monitor from VTech. Seriously? Was someone in my brain??

Well, of course I was absolutely interested and immediately said yes…and here we are today! So let’s get to it. 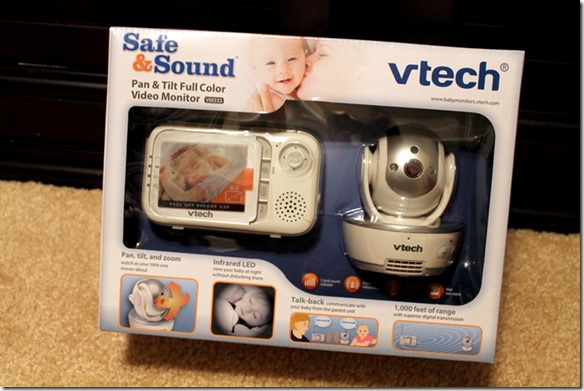 One of the first things that caught my eye, before I even opened the box, was the fact that it has a temperature sensor (one thing our current monitor doesn’t have), which is something I’m always worrying about in our house. So this is/was definitely a plus for me. 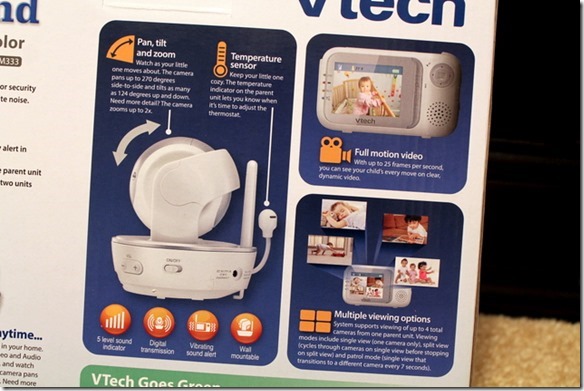 Another thing I noticed right away was its multiple viewing options.  The system supports viewing of up to 4 total cameras from one parent unit, which allows it to grow with your family. The various viewing modes include single view (one camera only), split view (cycles through cameras on single view before stopping on split view) and patrol mode (single view that transitions to a different camera every 7 seconds).

Once we got the monitor out and started working around with it a bit, I wanted to check out some more of its key features. The VTech Safe&Sound® Pan & Tilt Full Color Video Baby Monitor camera pans up to 270 degrees side-to-side and tilts as many as 124 degrees up and down. It also allows you to zoom in up to 2x to get a closer look at your little one which, as some of you probably know, is a much appreciated feature sometimes! 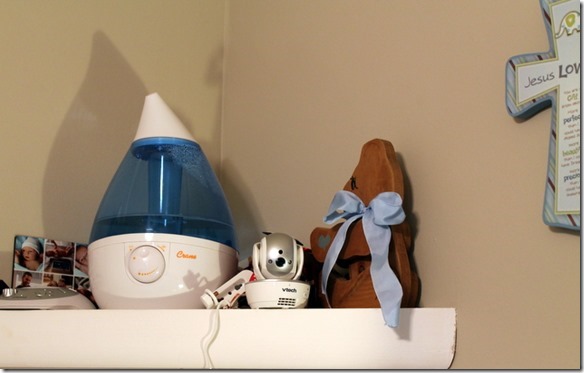 This was actually one area where we had some difficulty with the monitor, as we had a really hard time finding a spot in his room where we could get the angle/view that we wanted. Previously, we had his monitor so it was a direct view down into his crib, so we could see everything. However, the bracket that came with the VTech didn’t allow it to move quite enough to give us that same angle/view. I wouldn’t say that this was a deal breaker by any means, but it did just force us to have to readjust our views.

Eventually, we were able to sit the camera on top of one of the shelves in the corner of his room, and it gives us this view of the crib. 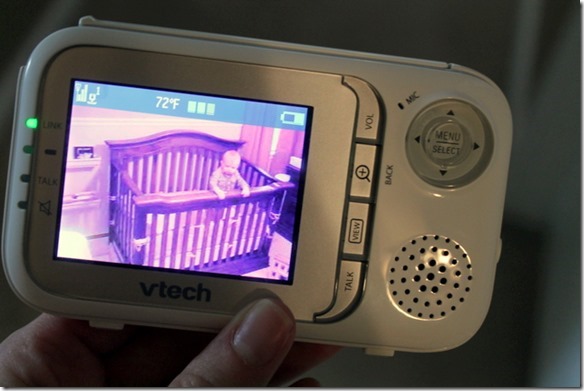 We can certainly see when he’s up/standing, and we can hear him no problem; it’s just the views when he’s laying down that are difficult. We’ll probably play around again more with maneuvering the camera to see if we can try another angle. We also had to move his sound machine (seen in a couple of photos above, to the left) because it was picking up on that noise too much.

As for the parent unit? It boasts a high-resolution, 2.8-inch color LCD screen, which really is a beautiful picture. Jay and I both agreed that the camera on this monitor looks much better/clearer than the other one we previous had, so this got 4 enthusiastic thumbs up from us! The monitor also has a talk-back intercom, automatic night vision, and up to 1,000 feet of range, so you know what’s happening even when you’re in another room (or, in our case, in the backyard…when the whether isn’t minus a million degrees, that is). 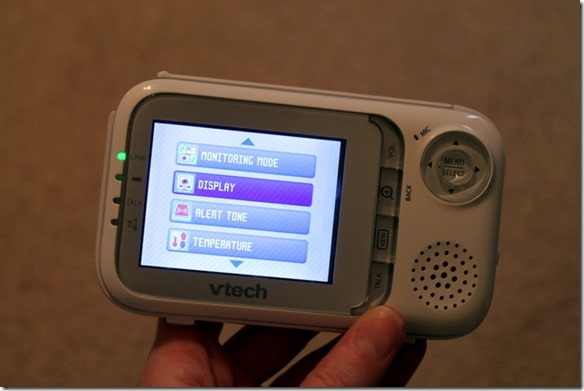 Another important feature? The Safe&Sound® Pan & Tilt Full Color Video Baby Monitor comes equipped with digital transmission. The signal is digitized and encrypted, ensuring video and audio transmission are always private and secure (<– which is, sadly, so important in this day and age).

Overall, Jay and I really like the VTech Safe&Sound® Pan & Tilt Full Color Video Baby Monitor and agree that this is one that we would have purchased on our own. The one flaw we had was not being able to get the exact angle that we’d prefer, but now that Lucas is a bit older, I don’t know if that direct view is quite as important. Whenever baby #2 comes around, I’ll definitely want that direct shot of the crib, but I’ll also be able to put the camera right on the side of the crib rails without anyone trying to grab it so that will be a non-issue. I also think that it’s a fairly good price for the quality and features you receive.

Want a chance to win a FREE VTech Safe&Sound® Pan & Tilt Full Color Video Baby Monitor along with some other great prizes??

Join me this Wednesday, February 18th at 1 p.m. EST, while I co-host the #VTechBaby Twitter Party! Check out the details below:

What: Whether you’re enjoying your infant’s sweet little smiles or admiring your toddler’s growing independence, we know you never want to miss a moment with your children. Thankfully, VTech’s Safe&Sound® Pan & Tilt Full Color Video Baby Monitor has you covered. With features like remote pan, tilt and zoom to scan your child’s room, automatic night vision and digital transmission that’s private and secure, you can be sure you know exactly what’s happening with your little one during naptime or playtime! Join me for a Twitter party to learn more about this amazing product and to chat about general baby and child safety tips!

Where: We’ll be on Twitter – follow the #VTechBaby hashtag to track the conversation. You can see the details and RSVP via this Vite: http://vite.io/themotherhood

Disclaimer: This post is brought to you by VTech and The Motherhood. I received free product and compensation for my time but, as always, all opinions are my own.