Gooooood morning! How’s everyone hangin’ in there this morning? Anyone else wondering where the heck the weekend went, ‘cuz I sure am. It was a super great one though, and let me tell ya something…now that I’m back to work, weekends are just so much more precious.

The weekend officially started once I was off of work on Friday, and when I went to go pick up my little guy, I was greeted with my first ever piece of “mommy artwork” from Lucas. 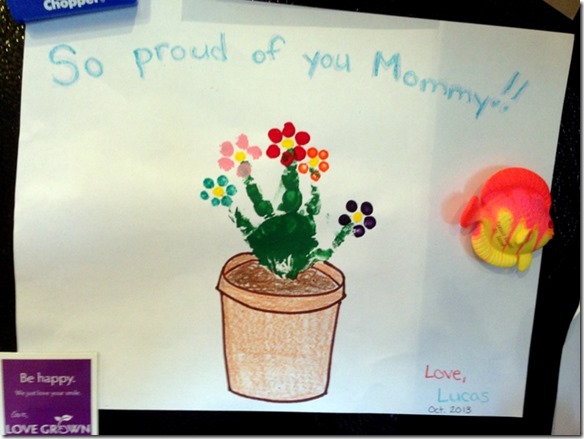 How adorable is that?! Erika said it wasn’t easy getting Lucas’s handprint (oh, we know that…we’ve tried!) but I love that she took the time to do that, and it’s now proudly hanging on the fridge.

Friday evening, Jay and I ordered in some dinner (my favorite pasta fagioli!) and then we partied hard into the night…

No, no. There was no partying it up on Friday night. In fact, shortly after Lucas went to bed, I found myself doing the same exact thing…in bed before 9pm on a Friday night. Party. Animal.

After getting my semi-broken up 10 hours of sleep, I woke up on Saturday feeling like a brand new woman. I spent the morning hanging out with Jay and Lucas, and then I was off for the afternoon to meet up with some of the girls for lunch and an appointment at a bridal boutique (my friend Eileen is getting married!).

Before leaving, I told Jay to make sure he ONLY texts me unless it’s a super duper emergency. Typically, if I leave my boys at home by themselves, I almost always get a text or two with an update…which is usually along the lines of “oh my god, he won’t stop crying” or “seriously, I cannot get him to nap.” Whenever that happens, I get super anxious and feel like I need to get home, so I asked him nicely to keep me blissfully unaware of anything that may be going down.

A little after meeting up for lunch, I heard my phone go off. Grrrrreaaaat. BUT, turns out I was just getting a little update from my smiley guy. 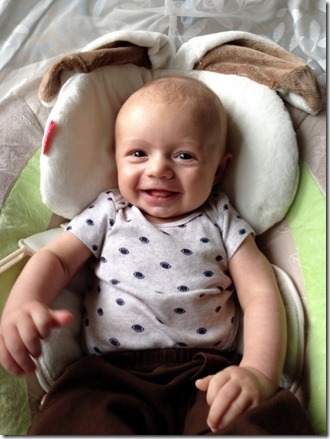 He didn’t feel much like napping, but apparently he just wanted to hang with dad.

Saturday evening, Jay and I had a Halloween party to go to and honestly, we really had no idea what we were going to dress up as. I was being super lazy about it and neither of us wanted to go spending a ton of money. So I wound up coming up with the idea for the two of us to go as “disheveled new parents.” 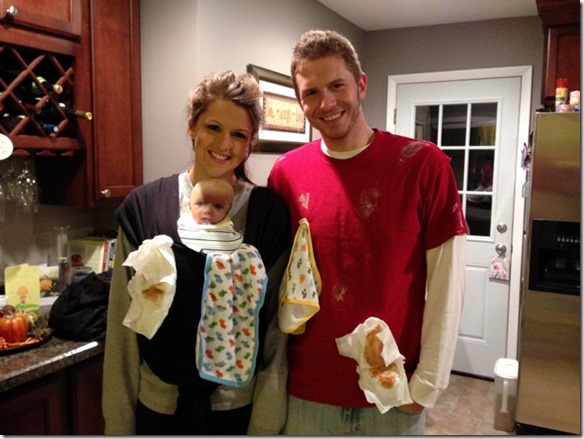 We spread some “fake poop” (aka, caramel apple frosting we had in the fridge) over a few diapers and on our clothes, pinned on some burp cloths, gave myself “bed head,” and then wore my Moby Wrap and stuffed it with a pillow covered in a onesie and a big print out of Lucas’s head. 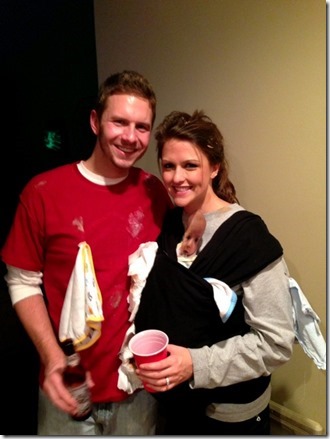 Hey, it may not have been super original or off the charts, but it was super comfy (the only way I do Halloween) and I laughed pretty damn hard every time I looked at the print out of Lucas’s face.

We put Lucas to bed first and then went out for a few hours while my parents graciously hung out at our house to “watch” Lucas. Thankfully we got home when we did because he wound up waking up (for the first time EVER) at 11:30pm ready to eat. I think little man may be going through his 3 month growth spurt.

Sunday started off the best way I know how…a hot cup of coffee and some pumpkin Kodiak Cakes prepped by my super hubby. 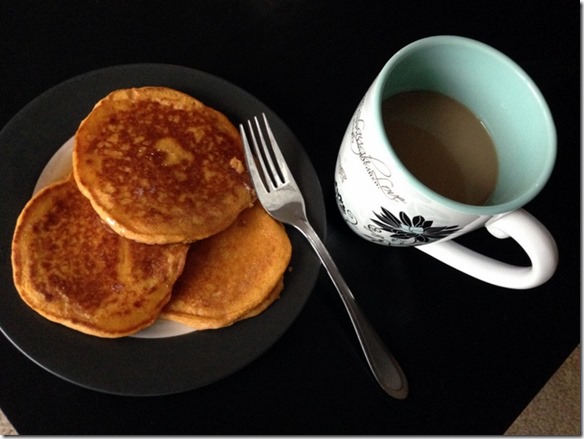 And the rest of Sunday was actually rather productive…Lucas and I went grocery shopping while Jay worked around the house, I made a batch of my favorite Pumpkin Black Bean Soup, 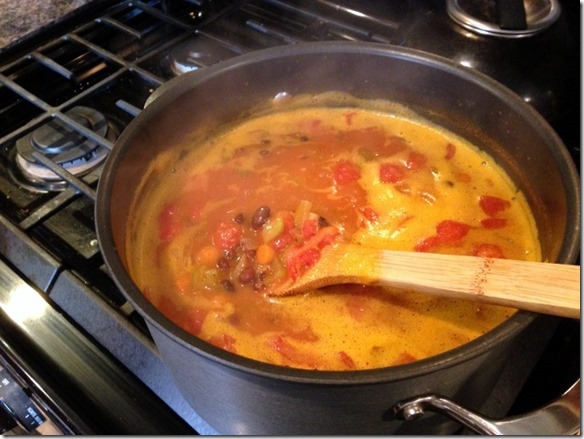 prepped a couple more salads for lunches during the week, 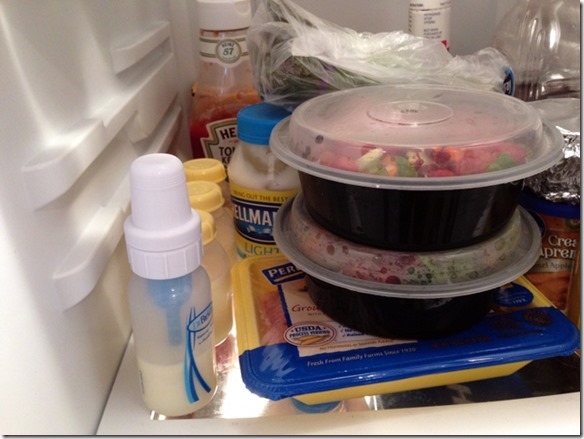 hung out with smiley, 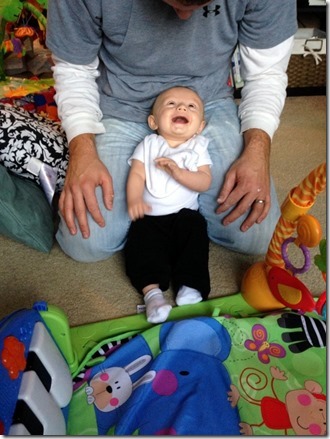 and also made sure to take his 3 month photos because, as hard as it is to believe, Mr. Lucas turned 3 months yesterday. 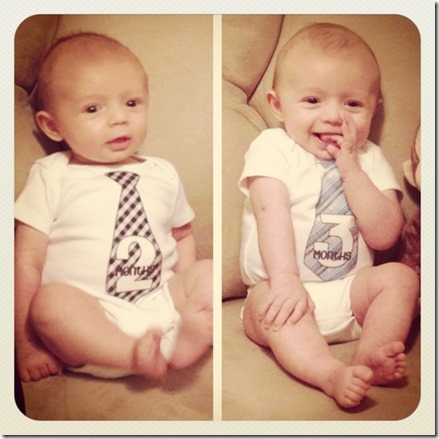 We had wayyyy too much fun taking this month’s photos…he was SO smiley and such a happy baby. I’ll include a few more photos in his 3 month update…whenever I get to that.

Dinner last night was pretty delish, too. I made some Mexican Pulled Chicken in the crockpot during the afternoon, served it over some brown rice, and topped it with some cheese, tomatoes, corn, avocado, and a little sour cream. 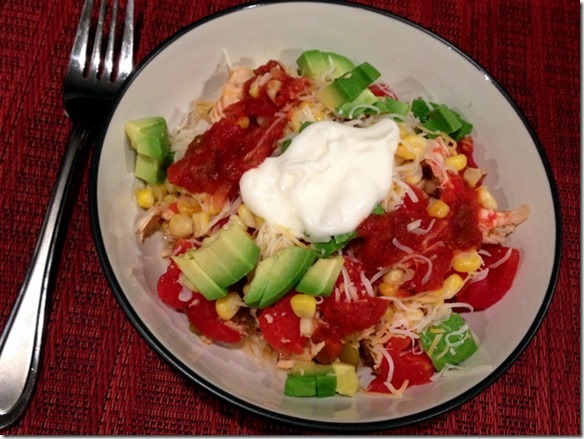 A little while later there was dessert, of course. I polished off the rest of a pint of Stonyfield frozen yogurt (it was on clearance for a dollar…finished it off in two sittings…whoops) and topped it with some caramel, mini chocolate chips, and cereal. 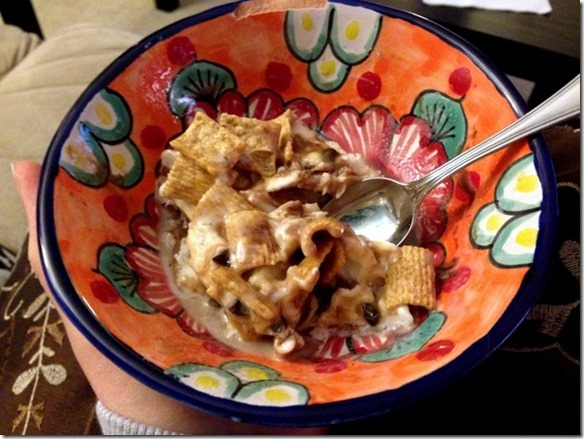 That was my bowl towards the end, mind you. It was muuuuch more full before that.

I guess for this being a “highlights” post, I think I got rather wordy.

So, that being said, I’m out. Happy Monday, friends!