They have a blast, day drink, and get a solid 10 hours of sleep. Heck. YES.

As I mentioned on Friday, Jay and I were lucky enough to be able to drop the boys off with my parents on Friday and take a little trip up to Lake George, NY (about an hour away from us). We’ve both visited plenty of times, and as we suspected, not much has changed!

Unfortunately for us, we planned the overnight fairly last minute, and the weather was not all that conducive to being outdoors for too long. But we saw that we were going to have at least a few hours of dry weather, so we were happy to at least have that going for us. 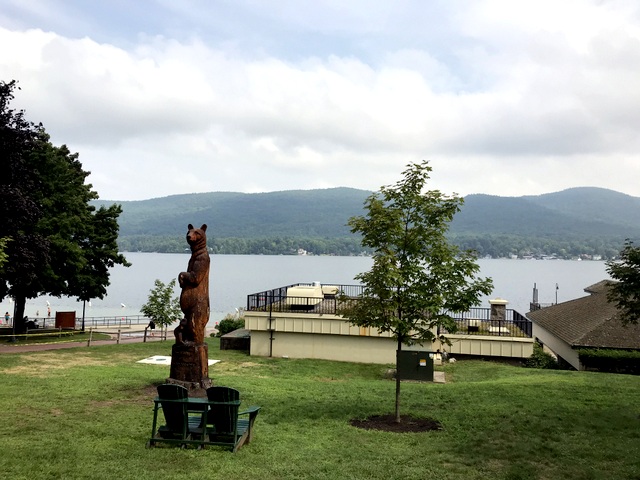 By the time we arrived, we checked quickly into our hotel, and then went down into the village for a little stroll. There was a craft fair/festival of sorts going on, which included a cute mix of homemade crafts, jewelry, food, and more. 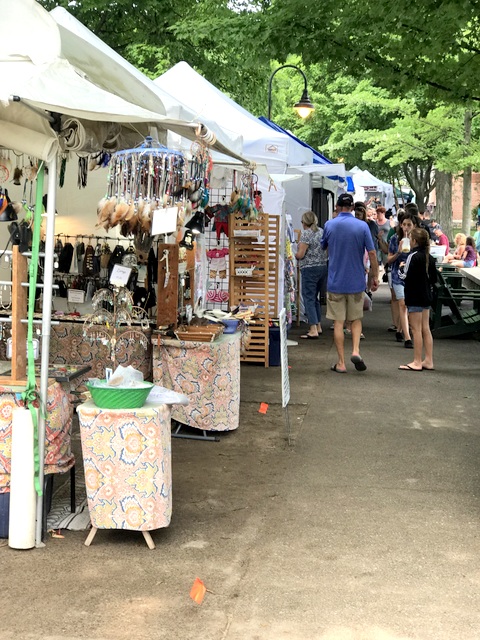 We didn’t wind up buying anything, but we had fun walking around and browsing.

Eventually we wound up back at the same winery that we visited the last time we were there, because the thought of a mid-afternoon wine tasting just sounded too good to pass up. 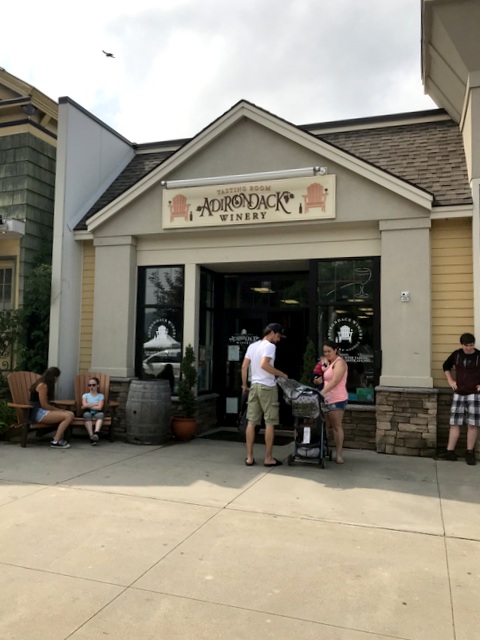 In the past, I feel like I remember them more for their sweeter wines, so we tried to make sure we chose some different varieties this time around. 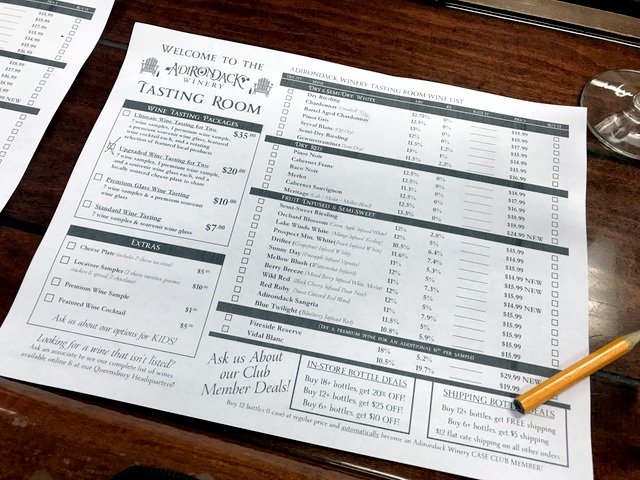 The Seyval Blanc was, by far, both of our favorite and I’m kicking myself for not stopping back and getting a bottle before we left. Next time! 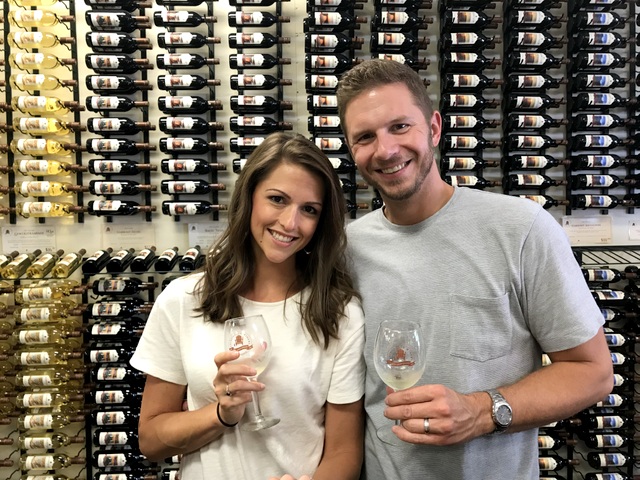 After out tasting, we walked along the water for a bit before eventually deciding to stop in for a drink at one of the waterfront bar/restaurants. 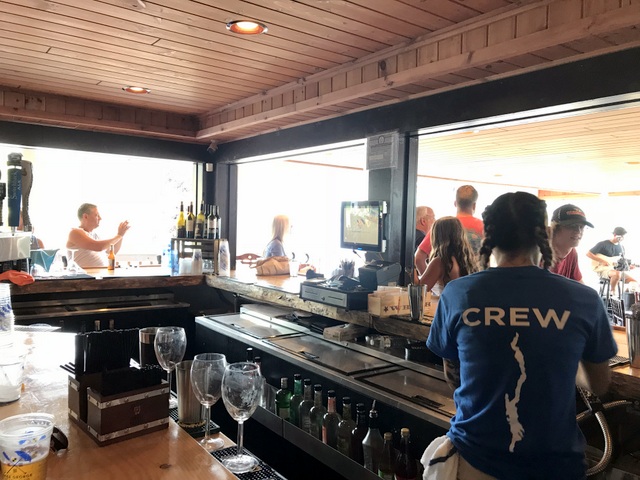 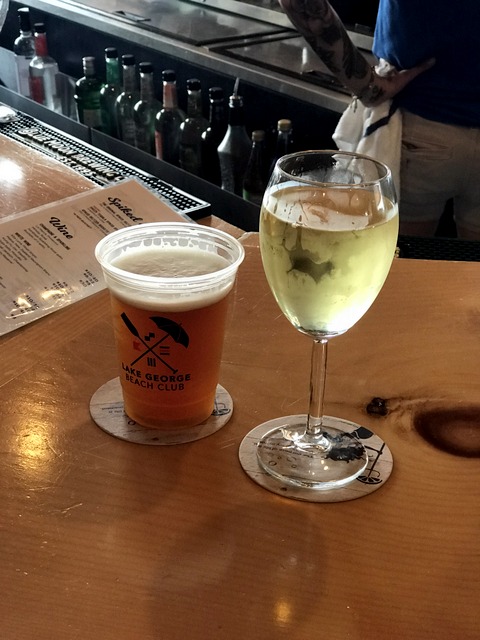 Jay and I always have some of our best conversations while sitting at a bar, and we had such a good time talking about some of our different goals, upcoming projects, and more. We definitely need to have talks like that more often, and sometimes it’s just SO nice to have things to talk about that aren’t all about the kids! 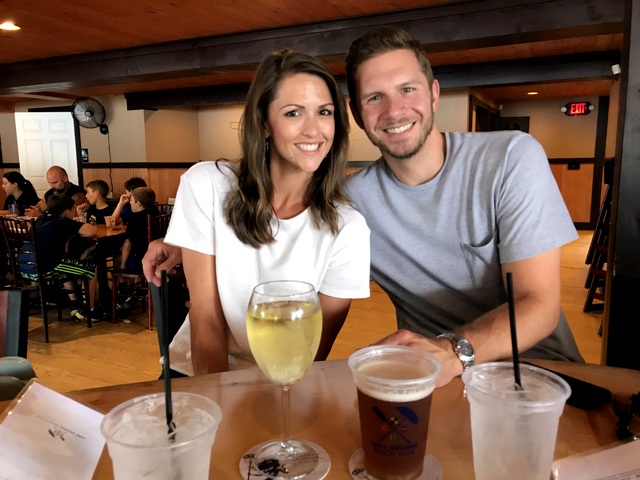 The clouds started rolling in right around the time that we realized we could really use some dinner. We debated on just staying where we were, but I wanted to explore a little more and see what else we could find, so we made our way back into the village to browse.

I was originally in the mood for something like a nice steak dinner, but we would have had to drive to get somewhere like that, and neither of us felt like doing that (nor could we, since we’d had a couple of drinks), so we’ll save that for another time. Instead, we eventually found 163 Taproom, and we grabbed a seat out under the covered patio. 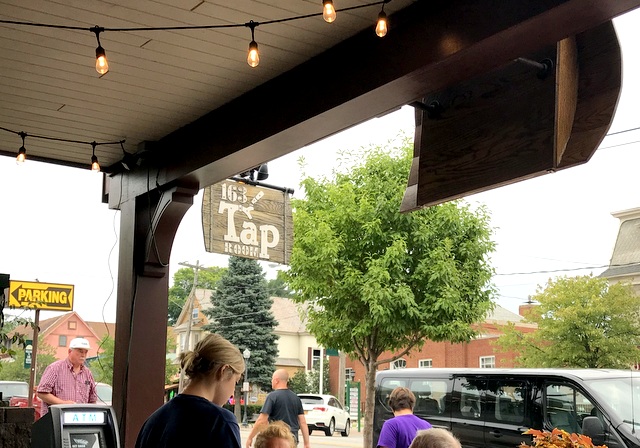 I wasn’t really in the mood for wine anymore, but I also wasn’t feelin’ beer either, so I was quite pleased when our waiter informed us that there was a really good, Austin East Pineapple Cider on tap. 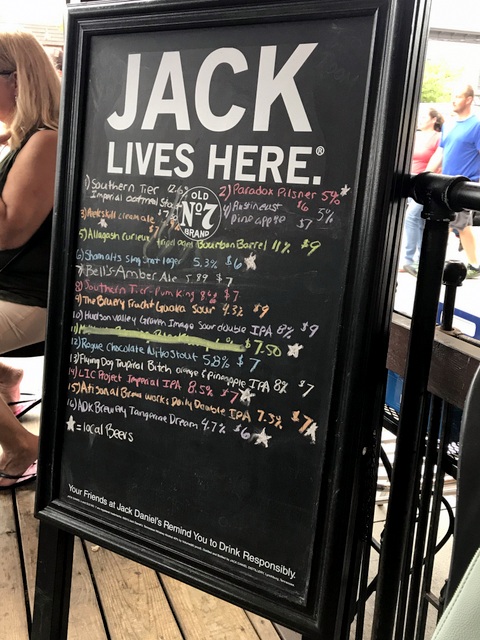 It was my first time ever trying (or hearing of) this brand of cider, but it was really good! A little bit on the sweeter side, but it tasted great and refreshing. 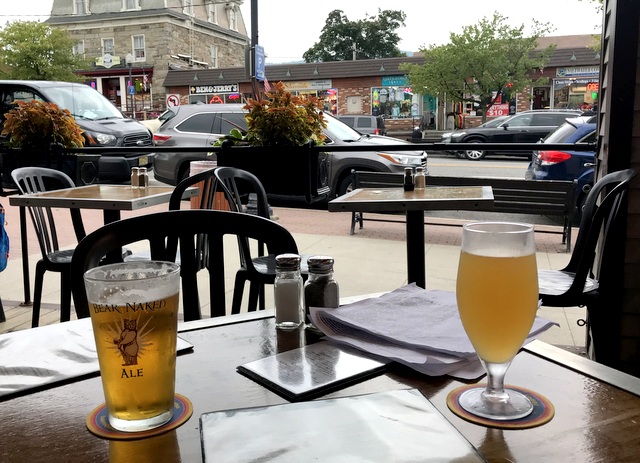 The food wasn’t anything spectacular, but it did the trick in filling us up. We both shared some pulled pork nachos and each wound up getting a burger. 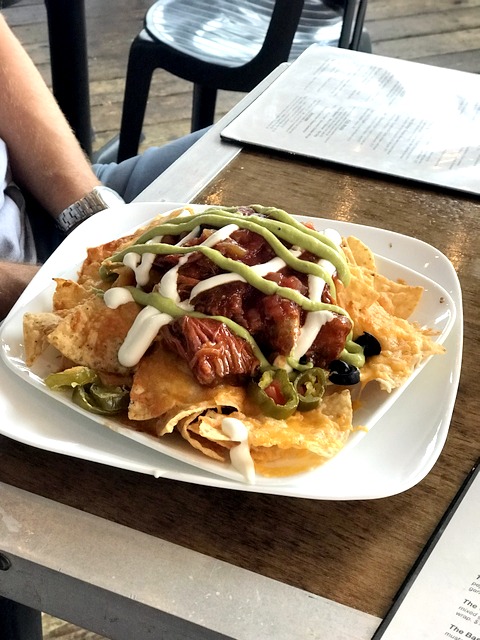 And right around when our food came out was when the rain rolled in. 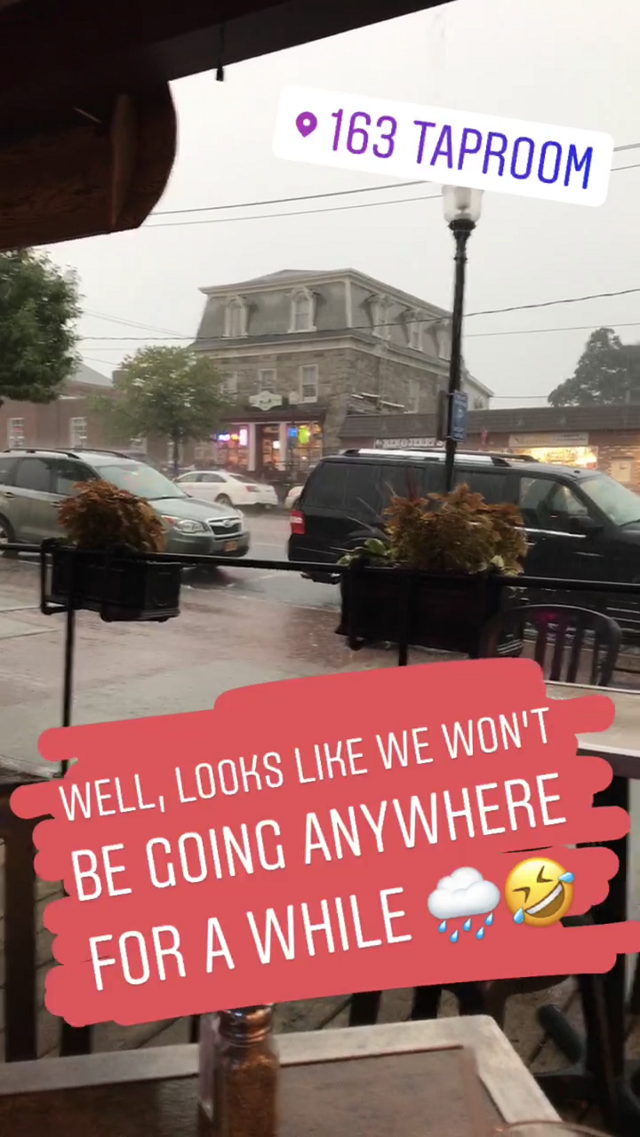 It was a pretty decent storm that stuck around for a while, so we just hung out and watched until things finally started to let up a bit.

At this point, I still had room for some dessert (because we all know dessert stomachs are a REAL thing), and I had spotted an ice cream shop that was just a couple doors down, so we made our way over to Nina’s Sweet Shoppe. All sorts of yumminess as soon as we walked in the door! 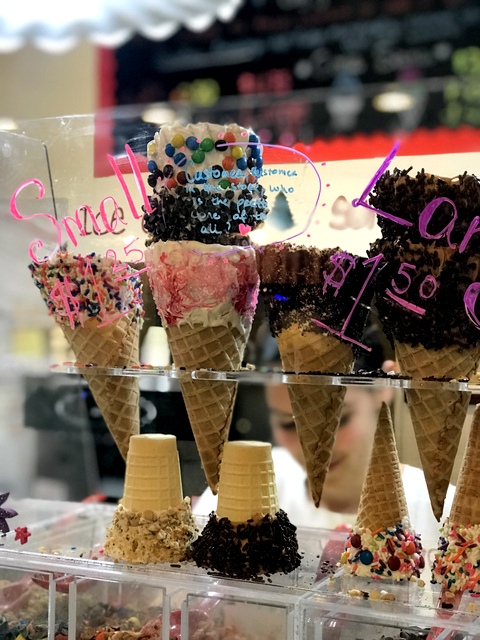 A little combo of cookie dough (duh) + some sort of caramel praline crunch. 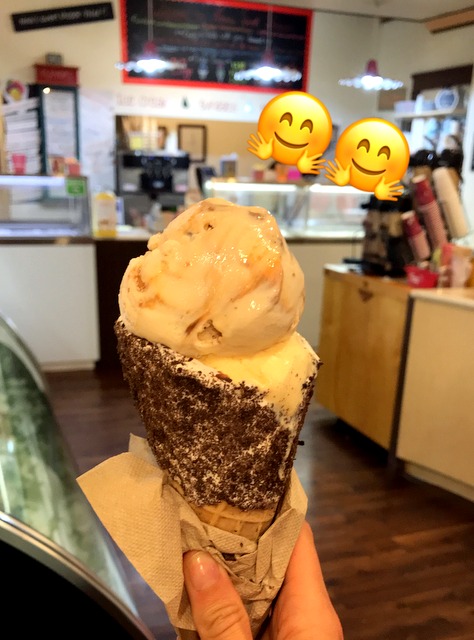 At this point, we were pretty stuffed, and it was still raining, making the entire village pretty much a ghost town. So we figured it was time to just call it a night and head back to the hotel. Then 10+ hours later of sleep, we were like new humans!

We started the day off with some breakfast back in the village at Cafe 185. I’m pretty sure we ate there the last time we stayed overnight in LG, but it looked a little different inside so we weren’t 100% positive. 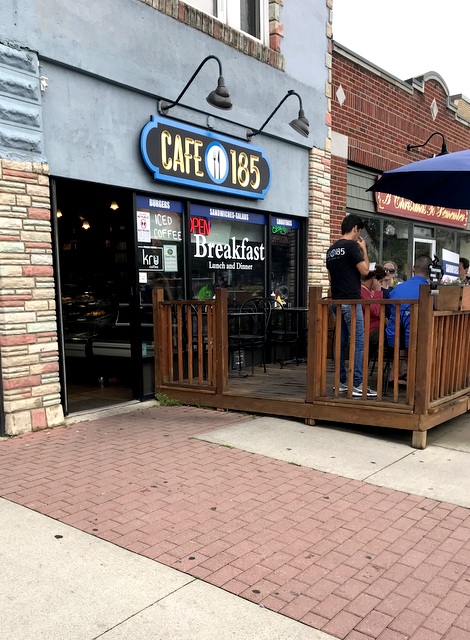 I got a veggie omelette with toast which was great, but not nearly as awesome as the pancakes that Jay got. They were incredible. 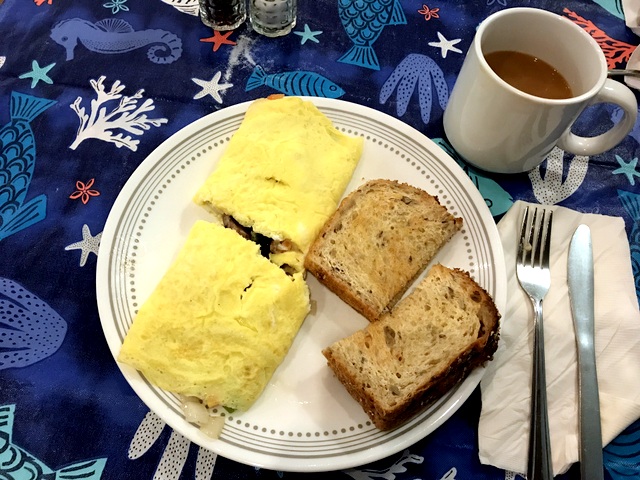 After breakfast, we went back, checked out of our hotel, and then drove down the road to the Lake George Outlets. They aren’t huge, but they do have a few stores that I like to check out (J Crew, Banana Republic, Osh Kosh for the boys, etc.), so we did a little shopping. 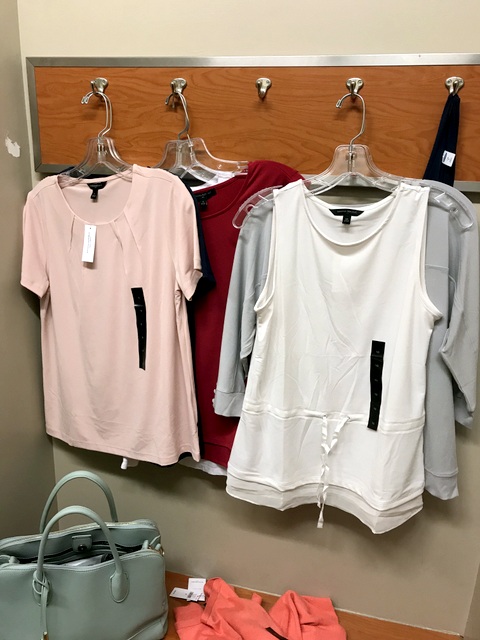 I found a couple of tops at J Crew and a few more at Banana Republic, so I’ll be sure to share them with you guys soon. 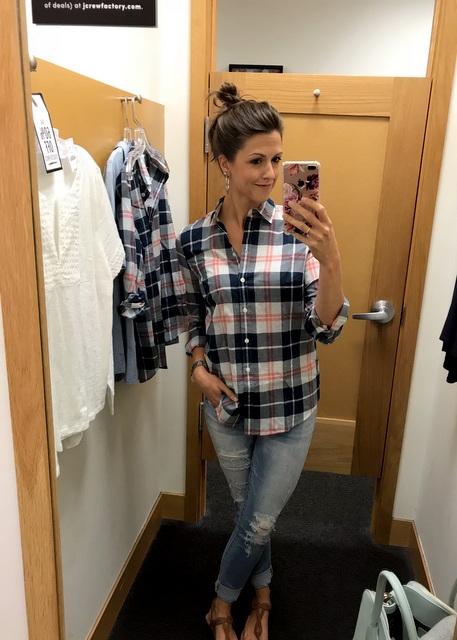 (I did not end up buying that plaid shirt, but it was cute!).

After a couple hours of shopping, we made our way back home to relieve my parents of their babysitting duties, and was happy to hear that both of them had a great time with their Nanan and Papa. Just further proof that we need to do this more often!

The rest of Saturday was super low key at home, and Sunday was pretty much the same. 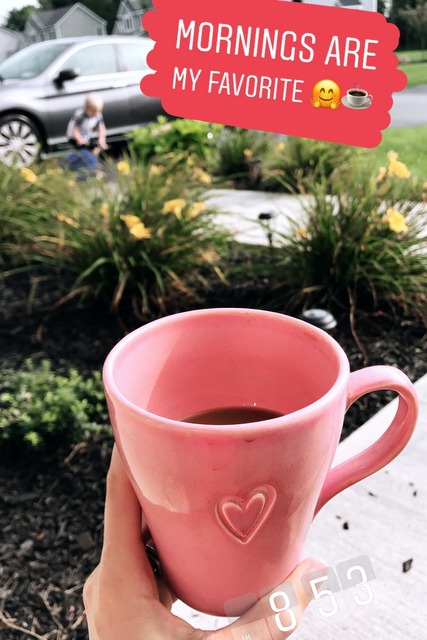 We did some work around the house, Lucas spent the entire day with his buddy, Kai, from next door, and we made some delicious grilled chicken salads for dinner. 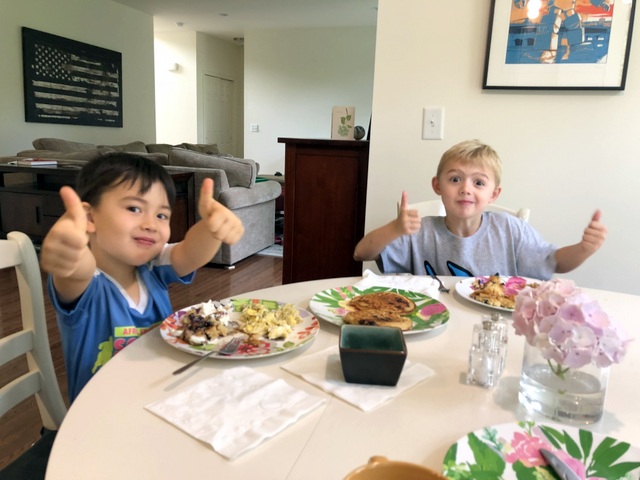 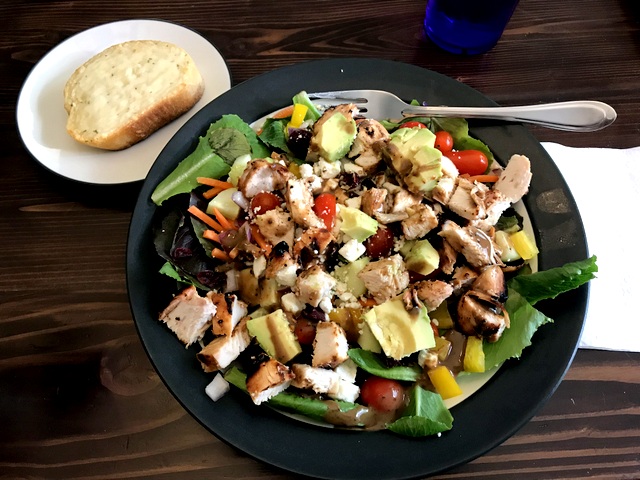 All in all, definitely an awesome weekend. And so crazy to think there are only a couple more of these left for the summer…gahhh! Why does summer have to go by so fast?!?