Ok, so you’ll have to bear with me a bit today.

I realized I never really bothered to take any photos yesterday, so I’m improvising a bit with quite a few of today’s photos. I still think you’ll get the idea though!

Although I did, in fact, have the always-delicious peanut butter and banana combo, mine was actually on regular whole wheat bread, not an English muffin. 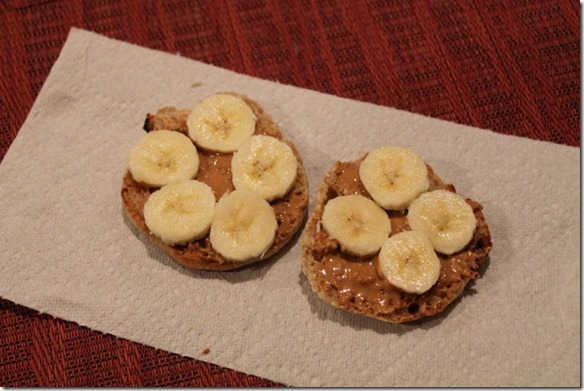 I actually brought the two slices of bread, the whole jar of peanut butter, and a banana into work with me and just made myself a couple slices of pb & banana toast bread. I missed having it toasted…I need to give myself 10 extra minutes in the morning.

I first started off with a Chobani, but again, this is an old photo and the flavor I had yesterday was pineapple. Loooooove me some pineapple. 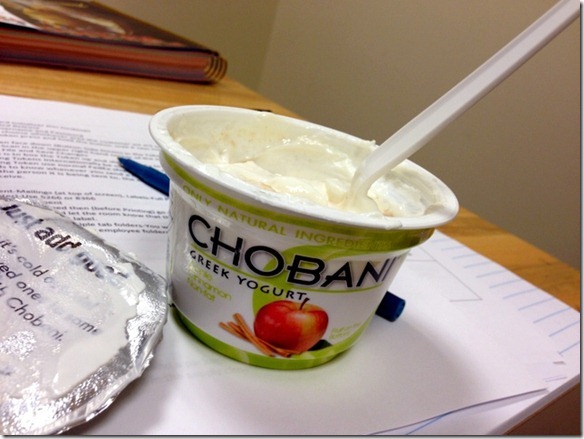 I then ate the other clementine that was left at my desk from yesterday. 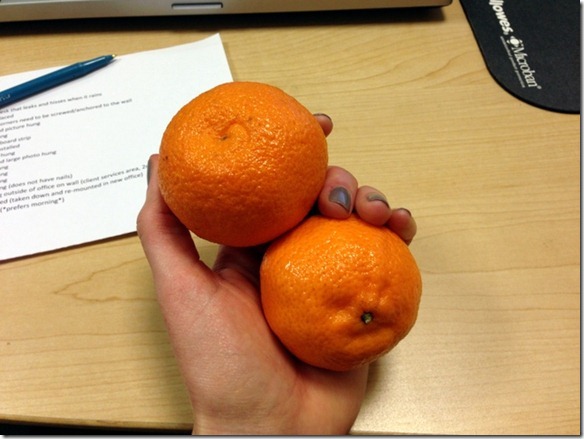 Both were good, but neither of them were fulfilling whatever craving I was having at that moment. Really, the only thing I wanted was a doughnut. Like, in a bad way. Thankfully, the craving passed…otherwise, a lunchtime trip to Dunkin’ Donuts may have been on the agenda.

This photo is actually one from yesterday…who knew? 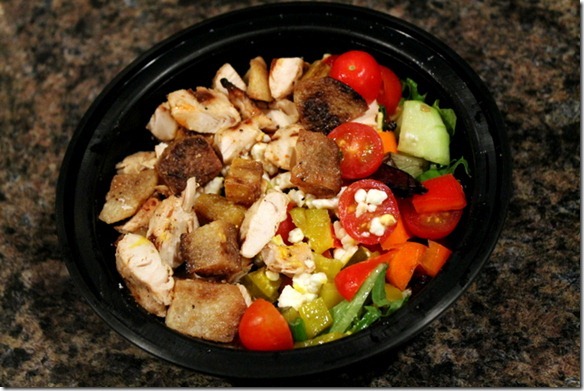 Last night while I was prepping dinner, I had the cutting board out so I figured I’d just go ahead and chop up all the veggies that I needed for a salad. This baby was loaded too…

It was SO good. 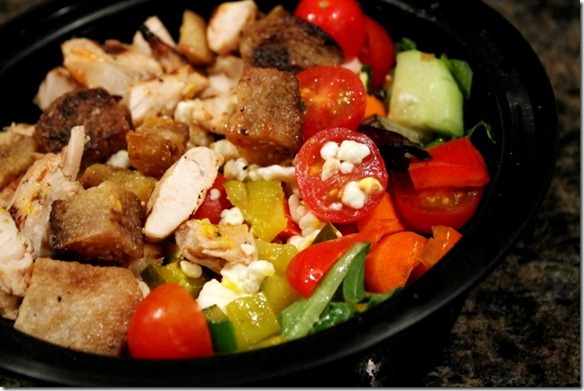 And even though the doughnut craving from earlier had somewhat passed, my sweet tooth had not. Thankfully, I had remembered to pack up a couple of Banana Oatmeal Chocolate Chip cookies, so I had them as my dessert. 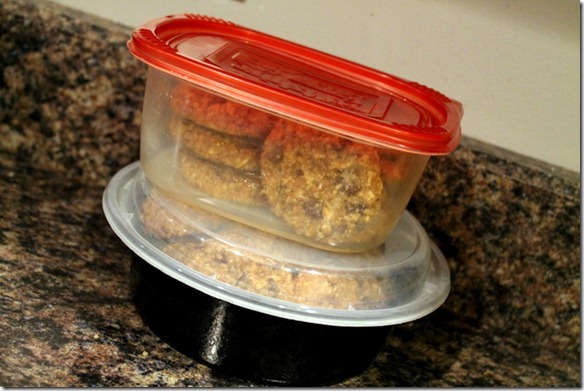 Alright, this photo is a bit of a stretch,  but it gives you an idea. 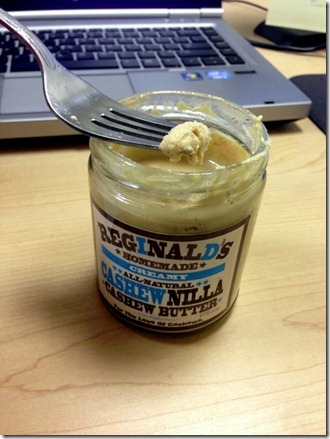 Since I already had my jar of peanut butter with me in the office, I decided to have some of that on a few Wasa crackers that I have stored in my desk. Typically, I would have gone for this cashew butter (which is also stored in my desk for emergencies) but I just stuck with the peanut butter since it was there.

I was pretty hungry by the time I got home but I couldn’t quite commit to anything for dinner yet, and since I was going to wait for Jay anyways, I wound up having a few bites of leftover goulash. 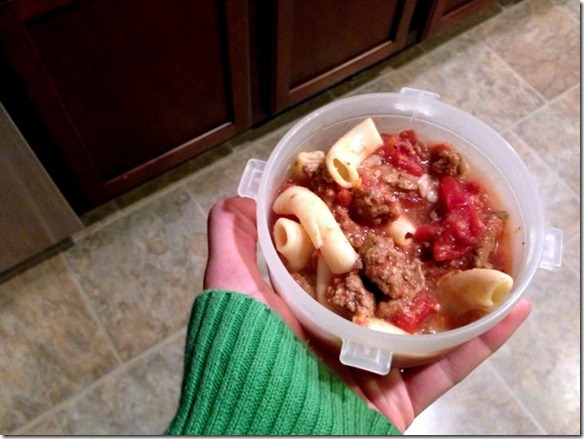 Since we, once again, seem to have quite a bit of leftovers that have piled up, we decided to declare last night a “make a dent in the leftovers” kinda night. Hey, works for me…I’m totally fine with a microwavable dinner. 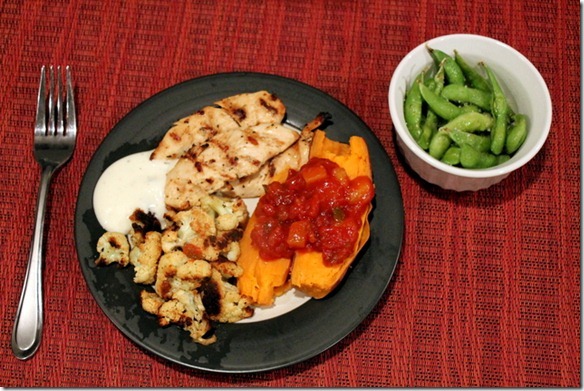 I heated up a few chicken tenders, a sweet potato, some leftover roasted cauliflower, and some random edamame that I found in the freezer. The edamame wasn’t the greatest, but it was still alright – especially when topped with a little extra sea salt. 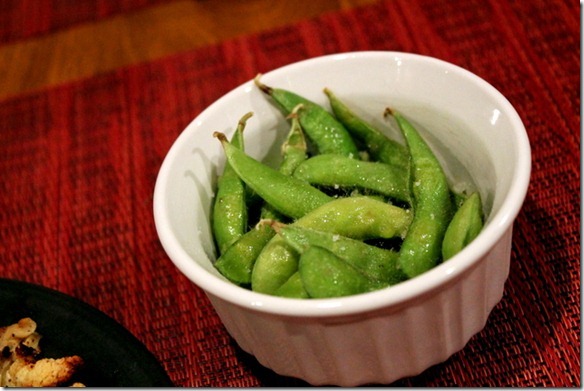 The rest of dinner was quite delicious, and I actually had a super strong craving for ranch dressing, so just about everything on that plate took a dip into it. 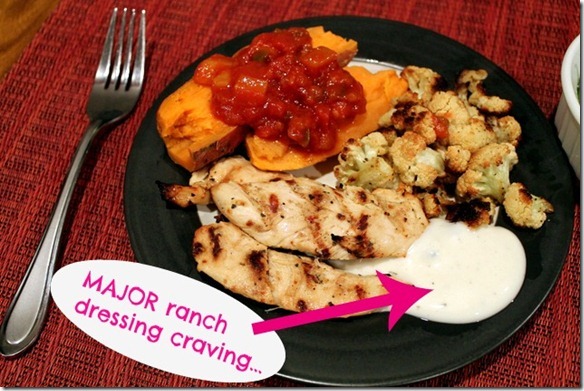 I feel like I really don’t get too many strong “I gotta have it” cravings with Baby Tooth, but last night was definitely one of the few.

Speaking of Baby Tooth…I swear, my belly grew overnight. Jay and I were both standing in the kitchen talking and getting dinner ready, and he was like, “woah, where did that come from?” I told him I was thinking the same thing and we both had a good laugh about it. He/she must be doin’ some growing up in there…

…orrrrr my large appetite from yesterday and today is catching up with me.

The perfect way to end the evening… 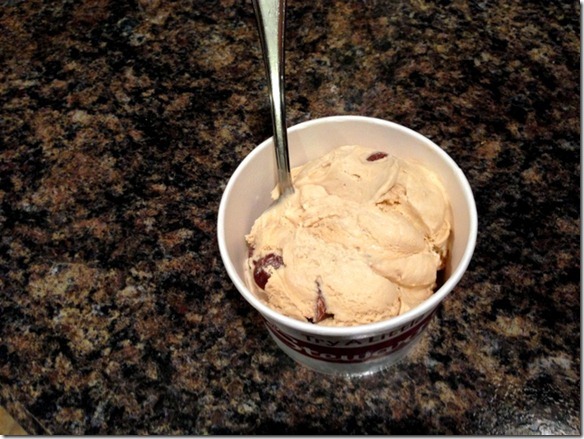 A small dish of Stewart’s ice cream while watching New Girl. Perfection at its finest.

Today is a super busy day for me; I have half of a regular work day, then a follow up with the asthma specialist (a different doc), and then I’m out of the office for the second half of the day for a big meeting and dinner party for work. I’m not expecting to get home until much later this evening, so let’s hope this extra energy stays with me for the day!