Hey, hey! Look who’s jumping back into the WIAW party!

I couldn’t believe that the last time I did a WIAW was back in May?!? I’ve been wanting to put together a WIAW for a while now, but I usually tend to share my food too quickly.

But since I didn’t really get a chance to share much yesterday, today’s the perfect opportunity to jump right back in!

This is the only meal from yesterday that you did get to see. 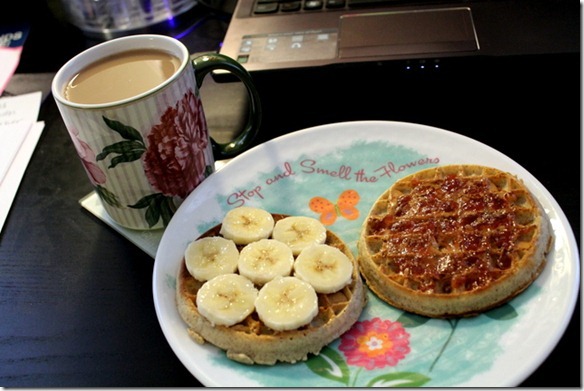 And it’s still just doin’ it for me, so I may wind up having it again today. Yum.

An apple cinnamon Chobani topped with some Love Grown Foods granola (aka, two of my favorite things, ever). 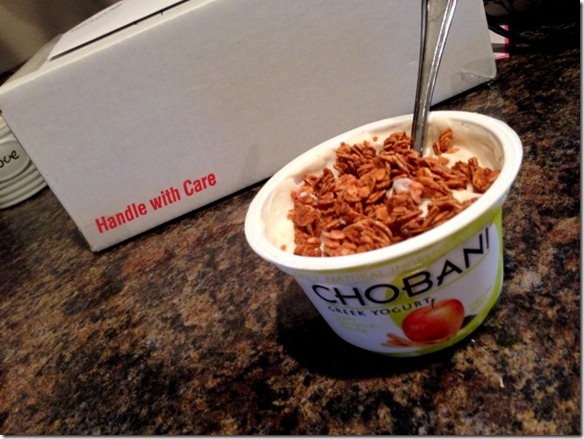 I snacked on this right before heading out to UPS to mail that package of cookies and other baked goods in the background there. Hope you enjoy them, Emily!

Around 12:45 I was starving, but I knew I had a conference call at 1:00, so I wound up grabbing a small handful of TJ’s cat cookies just because it was the first thing I saw.

One of the best salads EVER. Last night, Jay grilled two extra chicken cutlets while I was making dinner so I could have them for the week. He seasoned them perfectly (no idea how) but it just tasted amazing. 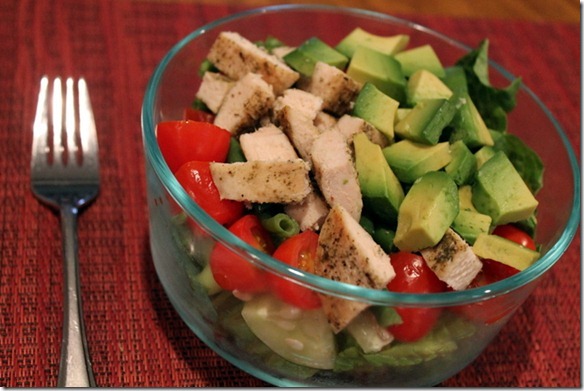 Along with the chicken in that salad, there was lots of romaine, cucumbers, grape tomatoes, leftover green beans, and half of an avocado. Chicken + avocado = HEAVEN.

A super sweet pear and some chunky peanut butter. 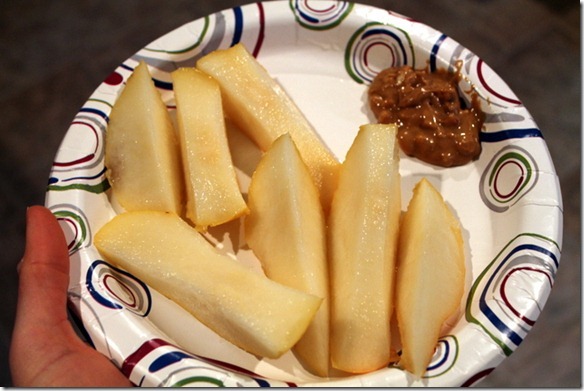 Usually, I’m an apple + PB fan, but the pear was ripe and ready to be eaten, so I went for it. No surprise, it was delicious…then again, I’m pretty sure you could pair anything with peanut butter and it would be a-okay in my book.

On Saturday night, Jay and I went out for pizza at a favorite local restaurant of ours, The Redfront. We wanted to go somewhere local to support Small Business Saturday (remember last year when we got paid to buy booze??) so it fit the bill.

We got one of their COB pizzas (I. Love. Their. COB. Pizza!), so I finished up two of the leftover pieces from the fridge for dinner, along with the rest of Monday’s green beans.

While watching The Voice and New Girl (once again, I CANNOT get enough of that show!) I snacked on a Fiber One 90 Calorie Chocolate Chip Cookie. 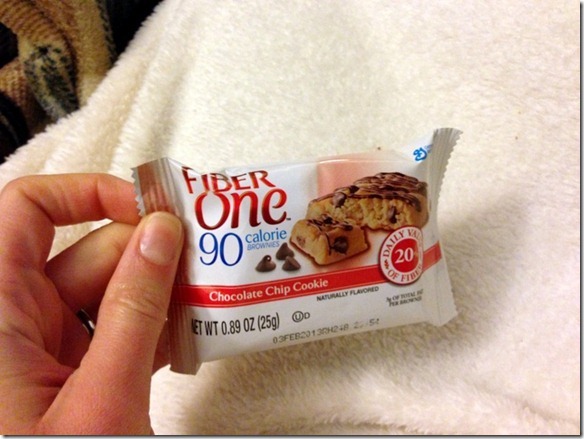 The company sent me a box to try recently, and when I saw it in the cupboard last night, I had to have it. They’re not usually something I would buy personally, but they’re pretty tasty.

I also had a nice hot mug of hot cocoa…with marshmallows, of course.

This is actually a picture from a couple nights ago, but I had the same exact thing last night, so you get the idea. I am lovin’ me some hot cocoa at night lately!

Poor Jay though…he can’t have any sort of caffeine at night (even hot cocoa) because it’ll keep him up all night, and he kept commenting on how good it smelled. We actually did some research and apparently there’s a 99.9% caffeine free hot cocoa out there made by Nestle? Has anyone else seen/tried this?

So there we have it! Another fun (and delicious) WIAW post.

“Disclosure:  The product and information have been provided by General Mills. All opinions are my own.”