Well, hey there. We’re stayin’ cool over here so far this week. 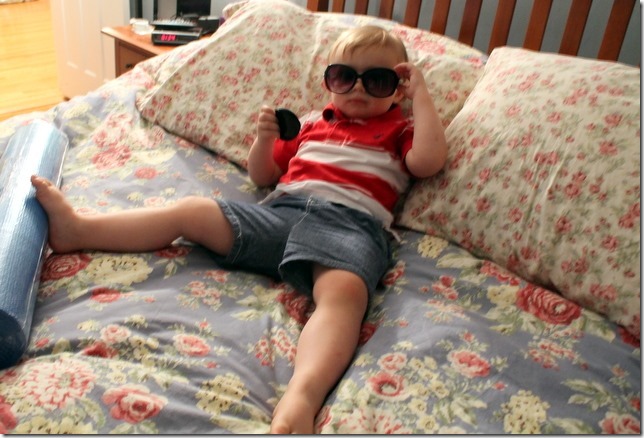 Seeing as it’s Wednesday and all, I thought it’d be fun to do another round of WIAW (thanks for hosting, Jenn!) since I ended up taking pictures of just about everything I ate this past Monday. I always love seeing what other people eat in a day (Is that weird? Maybe?), and since I think we all enjoy getting a little “peek” into each other’s days, I’ll go on ahead and share some of mine. Let’s do this!

My favorite Chocolate, peanut butter, and banana smoothie made with Shakeology + coffee. 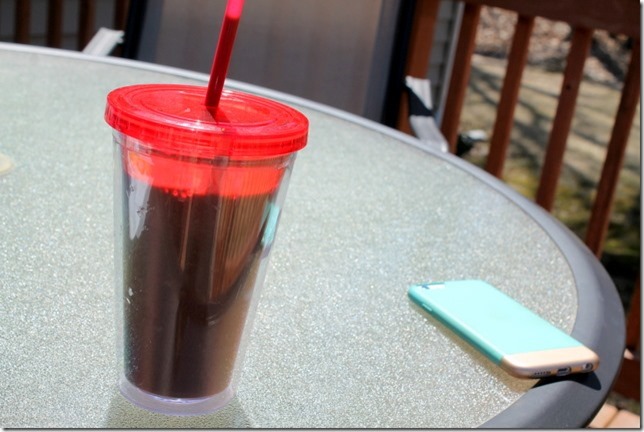 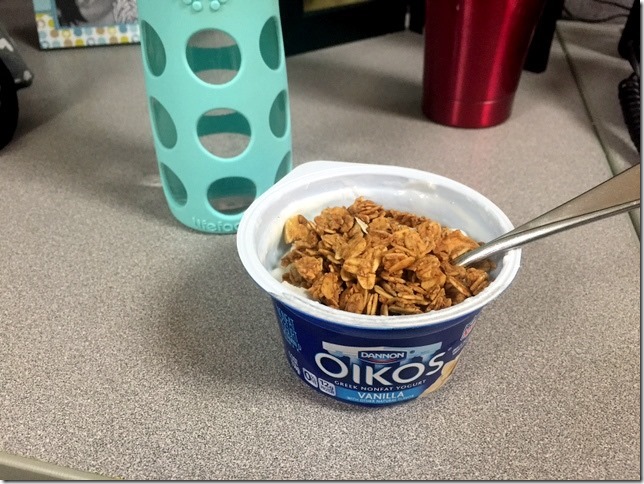 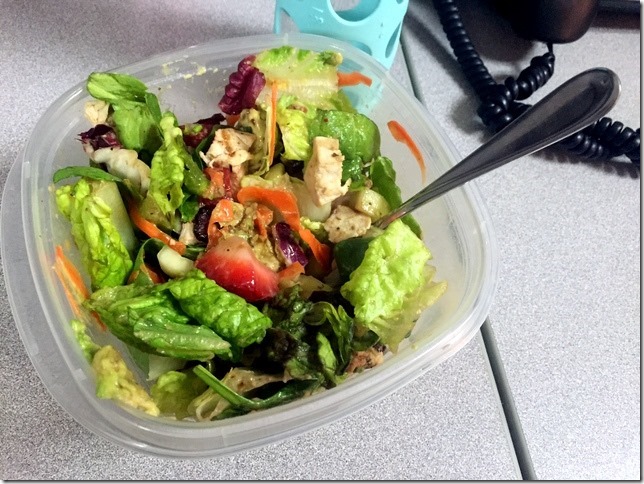 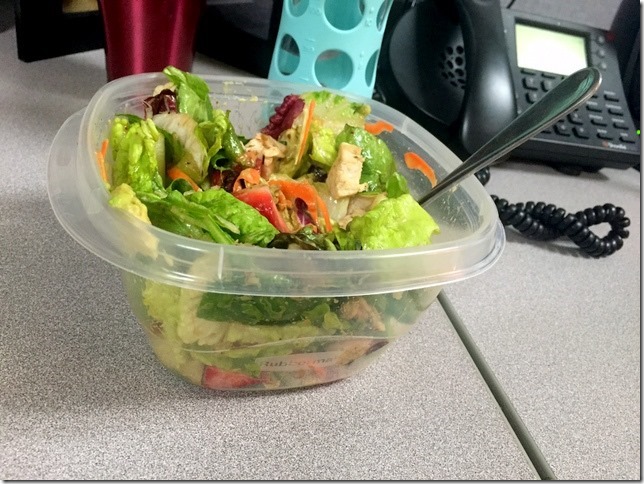 As delicious as my salad was, I wound up hungry, like, an hour later. My salads typically hold me over way longer than that…maybe it was the strength workout I did that morning?

Either way, I needed to get out of the office for a bit, so I took a quick drive over to DD’s to try out their Oreo iced coffee.

Just look at how dark that thing was! I ordered mine with just skim…

I ordered a small (partially because it’s really all I needed, partially because I didn’t know if I’d like it) and the verdict is…it’s pretty good. It’s sweet (and I only got half the syrup), and it kind of reminded me of a chocolate cupcake?! But my heart still belongs to my cookie dough. ;-)

Had they had them, I was also going to order myself a few blueberry munchkins, but they were out (probably a good thing). So I headed back to the office and worked through some snacks there while getting some work done.

First up, some antioxidant boost mix from NatureBox. 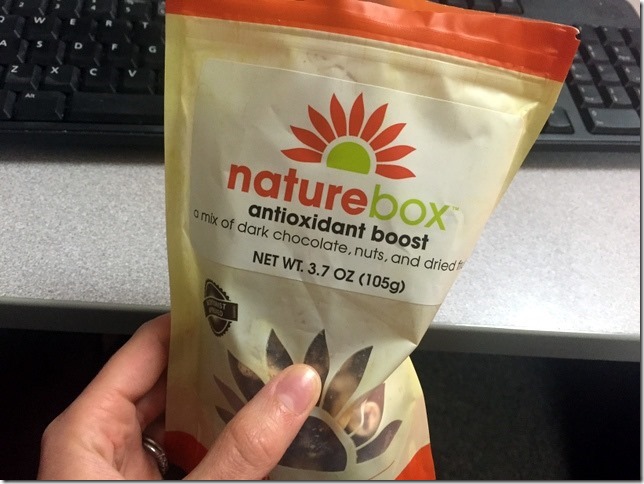 All of the chocolate ended up melting when it shipped, so it’s kind of like a chocolate bark in there now. I’m not complaining one bit. 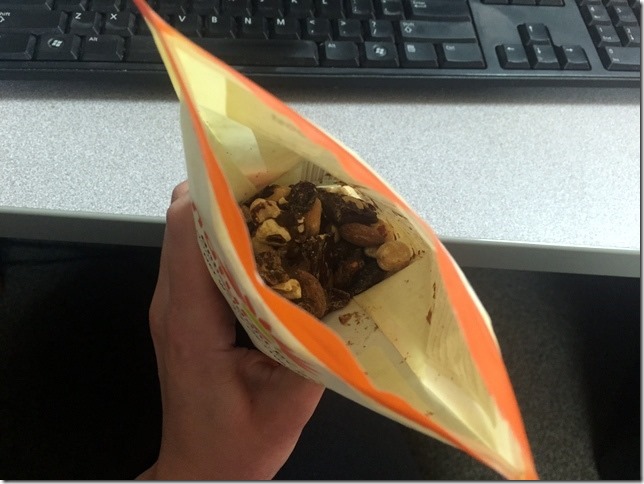 After that, I also snacked on a Vanilla Blueberry KIND bar. I picked up a box of them at the store recently and they are quite delicious.

Shortly after picking up Lucas from daycare, I attempted to offer him some of his favorite Annie’s bunny cookies. Surprisingly enough, he wasn’t at all interested in them…and then I felt my stomach start to grumble. 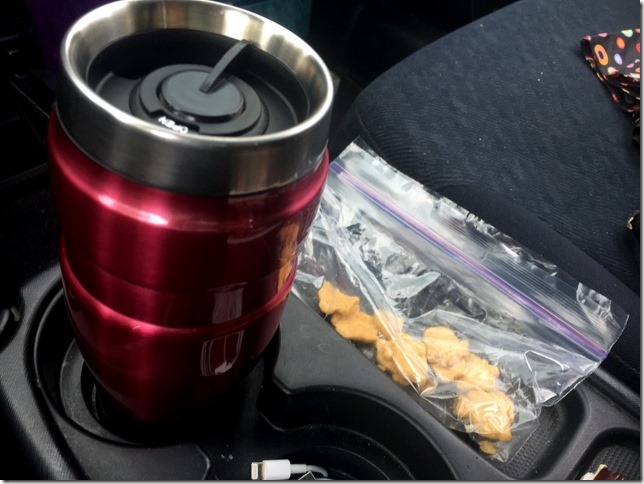 So I ate them instead.

Since Jay was supposed to have a softball game, I was originally just planning on “winging it” for dinner with me and Lucas. His game ended up getting cancelled, and then Kanika wound up making some delicious Chicken Fried Rice (she does a version of this recipe), so we got the opportunity to enjoy some of that for dinner. 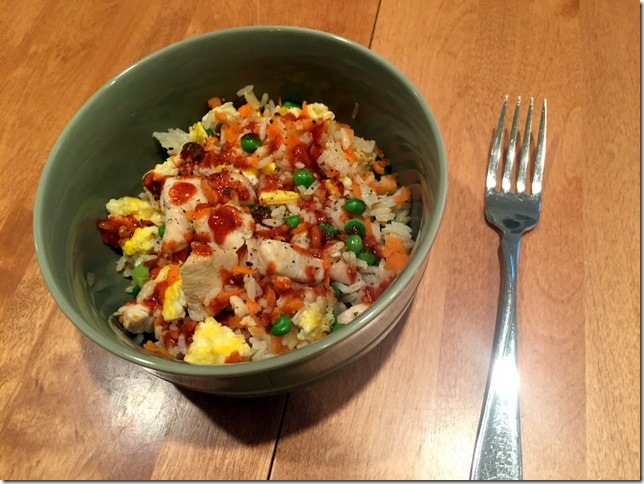 HOWEVER, let me tell you…as someone who really doesn’t eat Sriracha, I was not all that aware of just how spicy the stuff is. So when Kanika said she likes to “drizzle a little on hers,” I assumed I’d drizzle the way I do anything else. Holy CRAP, was my mouth on fire. Her and Jay found it all quite amusing, and THEN proceeded to tell me that a “drizzle” for them is more like, 5 drops.

Shortly after putting Lucas to bed, I headed back downstairs to put together his lunch for the next day. While making him some graham crackers and peanut butter, I also grabbed the box of Scooby snacks and snacked on a couple of those with peanut butter. 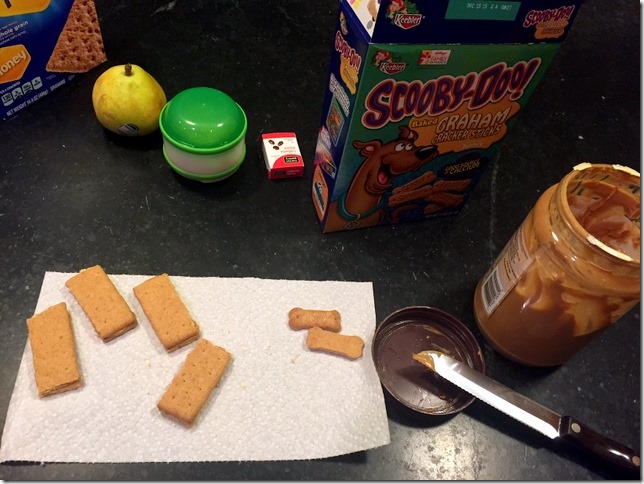 The things are SO. GOOD.

And then, finally, as if I hadn’t snacked enough during the day…I finished off the evening with a little something sweet. 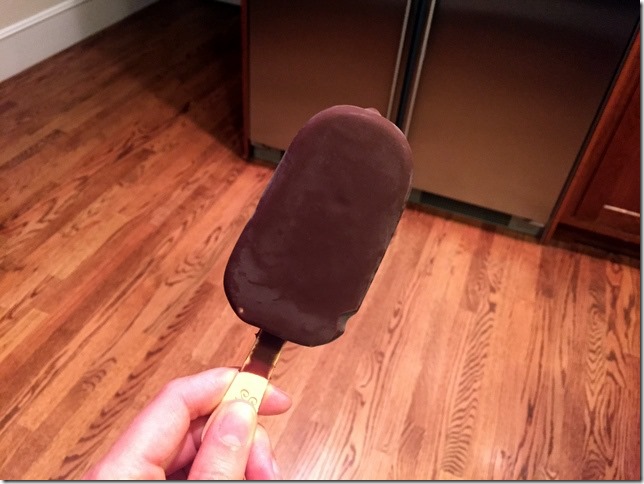 So I wouldn’t exactly say that this was my best day of eats in terms of some of my snacking choices (ohh, damn those Scoobys…), but hey…when you’re hungry, you’re hungry! And you eat the snacks that you have access to and taste delicious. No harm, no foul.

Question for today: What dessert has been ROCKING your world lately??