I don’t know what it is, but today just seems like it’s going to be a GOOD day. I got a great night’s sleep, a fabulous, 40-minute cardio/strength circuit in this morning, heard some Macklemore on the radio while getting ready for work, the sun is shining, and it’s supposed to be 70 degrees today.

Yes, today is going to be a good day!

So now, let’s get to the good stuff. Yesterday included a bunch of yummy eats and, hey, check it out…lots of colors this week, too! 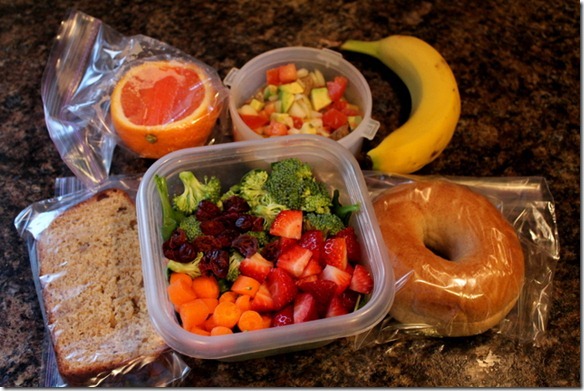 I woke up craving peanut butter and banana, so I packed up a honey wheat bagel and the banana to bring to work with me… 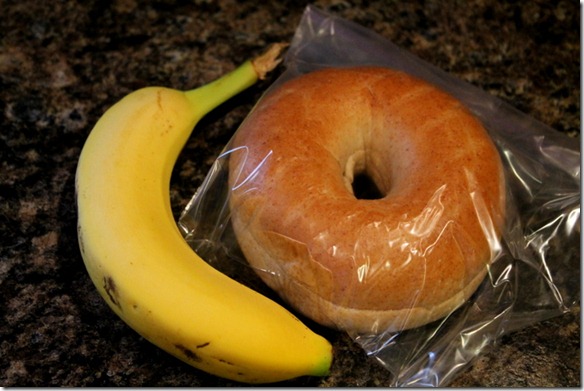 So I could toast it up and top it with all sorts of melty peanut butter from my desk stash. 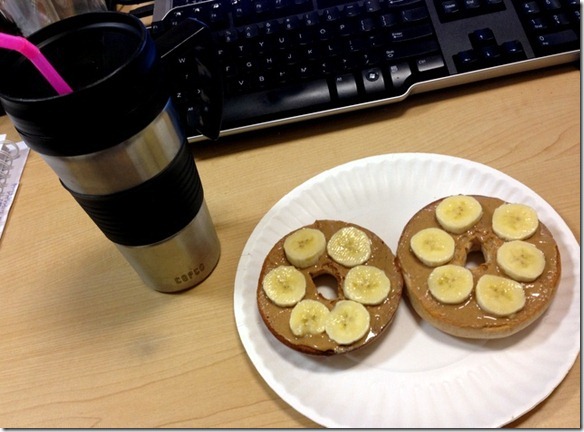 It was deeeeeelicious. Especially alongside my iced coffee. YUM.

I only used about half of my banana with breakfast, so I ate up the rest of that along with the orange I packed with me. 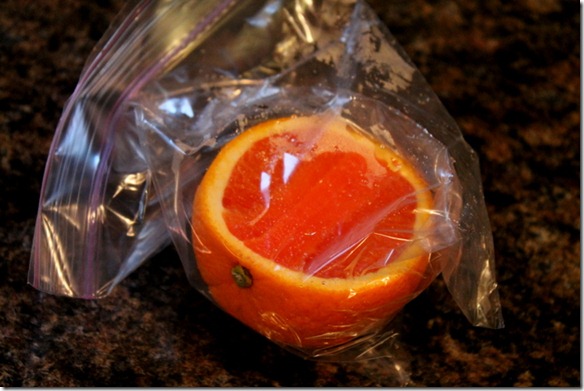 I know…super random that it’s missing a section, right? Well the recipe we used for the beef carnitas last night called for a section of an orange to go right in the pot. That being said, I made sure the rest of the orange did not go to waste!

Lunch was a two-parter for me yesterday. 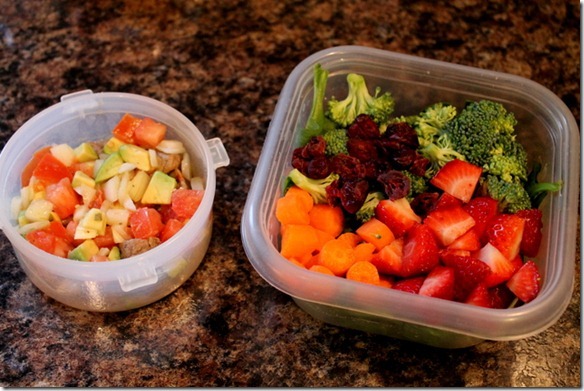 Around noon I started getting hungry so I ate my spinach salad (I promise, it’s under there) which was topped with some baby carrots, broccoli, strawberries, and dried cranberries. There was also some raspberry walnut vinaigrette underneath that bad boy. 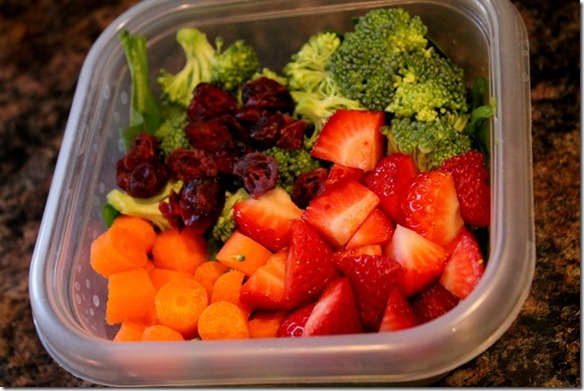 After lunch part one, me and a co-worker friend of mine headed outside for an afternoon stroll. It was still a tad chilly, but we wound up doing a few big laps around our building and parking lot and probably spent a good half hour or so power walking it up. It felt SO good to get out and get moving!

About an hour later, I broke into lunch part two, which was the rest of the leftover beef carnitas mixture (which really wasn’t all that much). 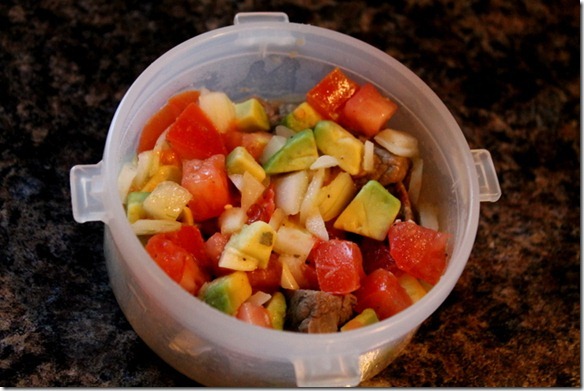 Not long after finishing up the leftovers right up there, I snacked on a piece of banana bread that I brought with me. Pretty darn tasty, I must say! 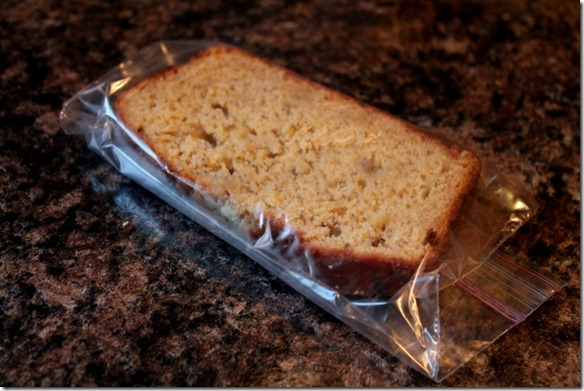 I was pretty hungry again by the time I got home from work, so while I was chopping up some veggies for dinner, I snacked on some baby carrots and light ranch veggie dip. 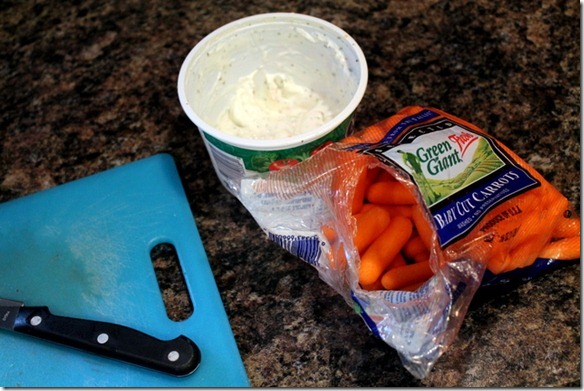 Still lovin’ me some ranch!

We had a couple of pieces of chicken marinating in the fridge for about a day so Jay decided to cook those up. I wasn’t really in the mood for just plain chicken or a regular chicken sandwich, so I decided to make a big batch of chicken salad with my piece. 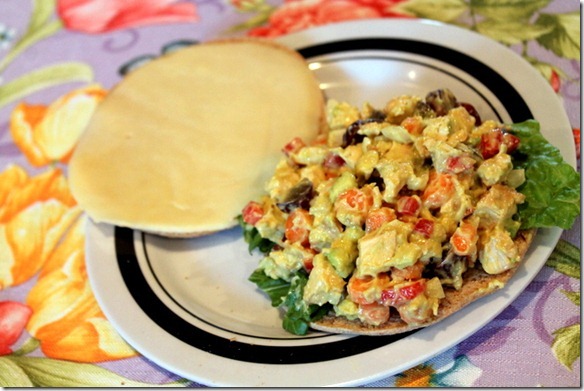 I didn’t have all of my usual veggies, but I did add some carrots, red bell pepper, avocado, red grapes, and dried cranberries, along with some light mayo, honey mustard, and salt and pepper.

I then took about half of the mixture and put it on a whole wheat sandwich thin along with some lettuce and a slice of provolone cheese. 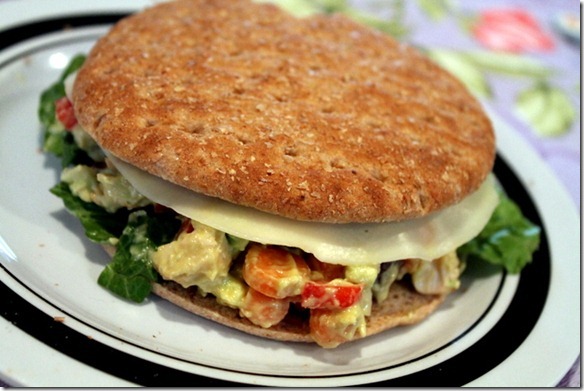 Simple, yet suuuuper satisfying. AND I already have lunch ready for today…doesn’t get much better than that!

Ever since Saturday, when I made that batch of cookies, I’ve been allowing (actually, that’s a harsh word…I’ve been CHOOSING) to enjoy two after dinner. A couple of times I’ve just had them plain, and a couple of times I’ve enjoyed them slightly heated up and crumbled with a tiny scoop of Edy’s light french vanilla ice cream. 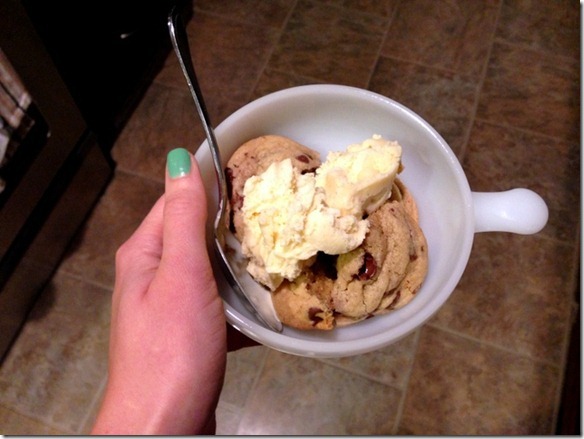 Happy Wednesday, everyone! Hope it’s a good one for you, too! :)