I’m jumping back in on the WIAW bandwagon this week!

It’s no secret that these days, my appetite is pretty large. I’m usually eating just about all day long, but as I mentioned yesterday, I’ve been filling up a lot quicker than I’m used to. So yesterday, rather than sit down to big meals (not that I do that all the time anyways, but still…) I wound up spacing a lot of meals out throughout the day into smaller snacks, and it worked perfectly.

So here’s a look at what I ate…on Tuesday. 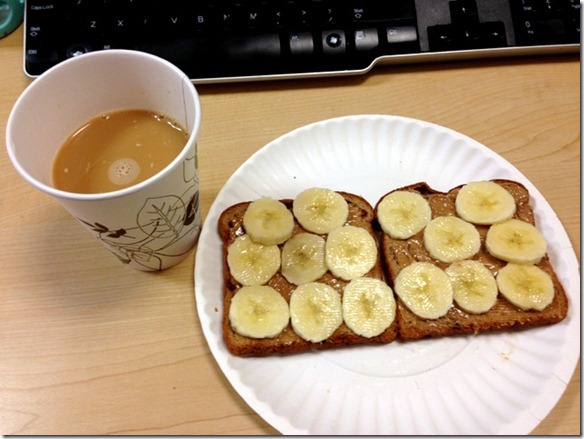 I’ve been eyeballing the Pepperidge Farm whole wheat cinnamon raisin swirl bread at the grocery store for weeks now, and this past week I noticed that not only did I have a coupon, but they were also BOGO at Price Chopper.

The bread is SO good that it doesn’t even need to be toasted. I’ve had it the past two mornings (three, if we’re counting today) and it is just totally hittin’ the spot. 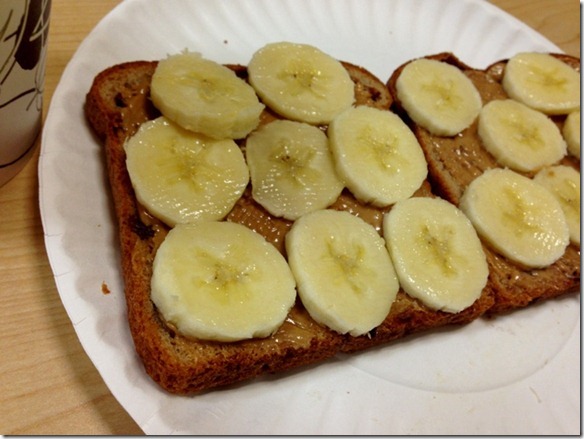 Mid-morning, I also snacked on the other half of my banana but that went un-photographed.

My day yesterday was pretty crazy, and lunch was eaten in quite a few different phases. Around 1:00, I grabbed a small cup (about three bites worth) of some potato salad that was leftover from a sales luncheon. It was probably the best potato salad I’ve had in years…no joke. 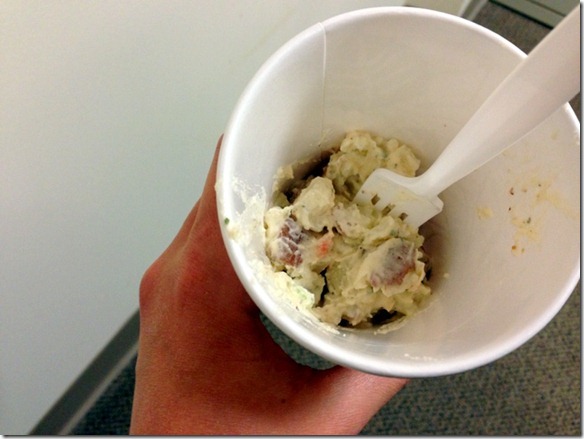 A little while later, I ate part one of lunch – a banana Chobani with strawberries, blueberries, Quaker Oatmeal Squares, and Multigrain Cheerios. 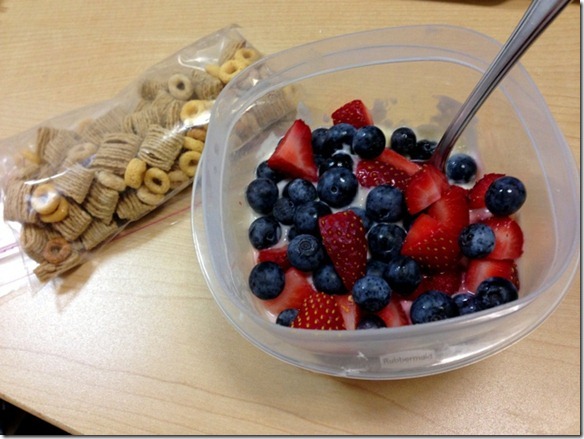 About an hour later, I snacked on some baby carrots and grape tomatoes with sundried tomato hummus. 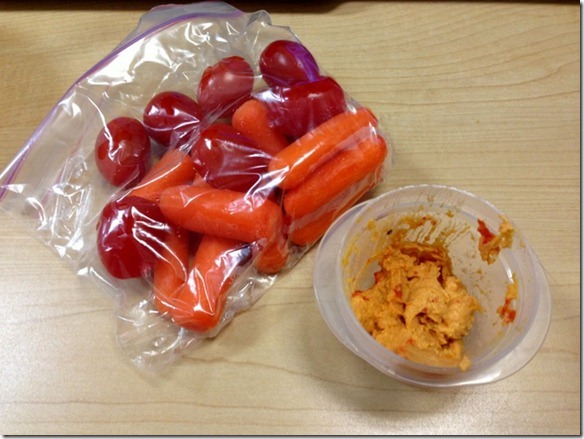 Around 4:00pm, I needed something yet again, so I grabbed a Blueberry Bliss Luna bar from my desk drawer stash. I absolutely LOVE the blueberry flavor Luna bars – probably my favorite. 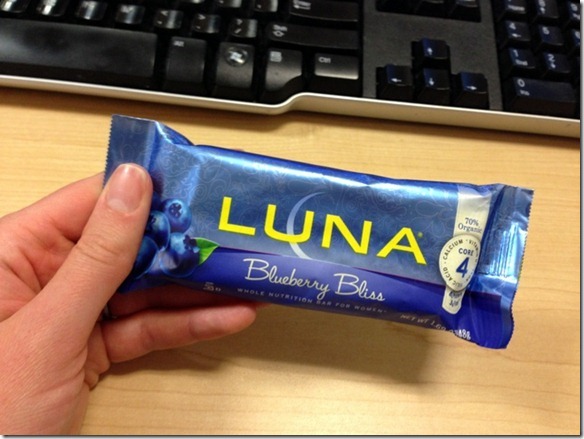 I couldn’t help it… 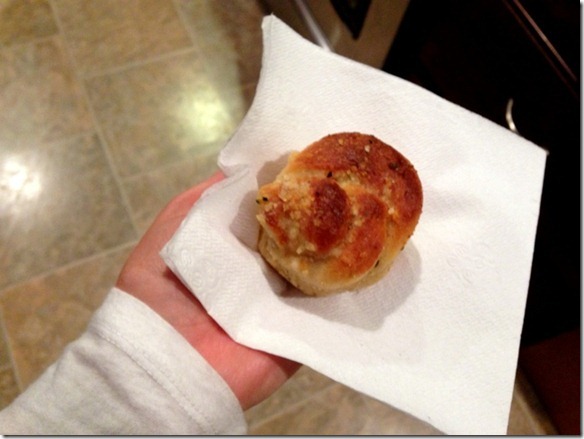 We didn’t eat dinner until a little after 7:00pm, so while we started getting things prepped, I wound up snacking on a garlic knot leftover from Monday night. Heated up, I swear it was even better this time around.

About a half hour later, dinner was finally served. And ohhhhh baby, was it good! 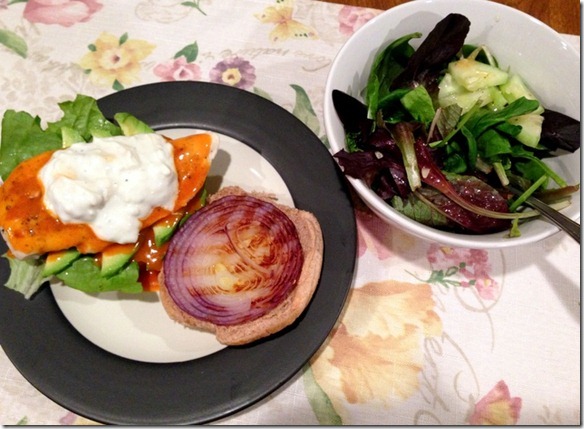 I made a couple of simple side salads to accompany the main star of the evening…grilled buffalo chicken sandwiches. 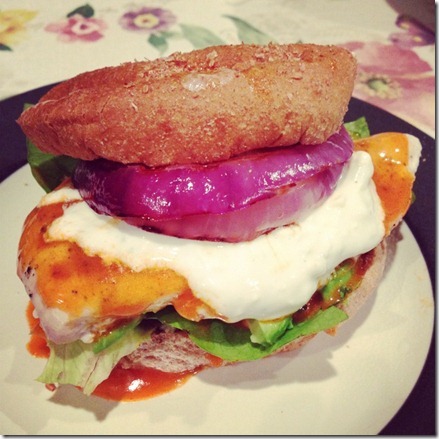 I actually made this recipe back in May of 2011 (was totally shocked when I realized it was almost two years ago?!) after finding it in one of Jay’s issues of Men’s Health. The recipe wasn’t posted online when I originally made them, but it is now (here’s the recipe). We followed it exactly, but I also added some sliced avocado to my sandwich just to jazz it up a bit more. So spicy…soooo good.

Jay and I each enjoyed a special cupcake shortly after dinner. 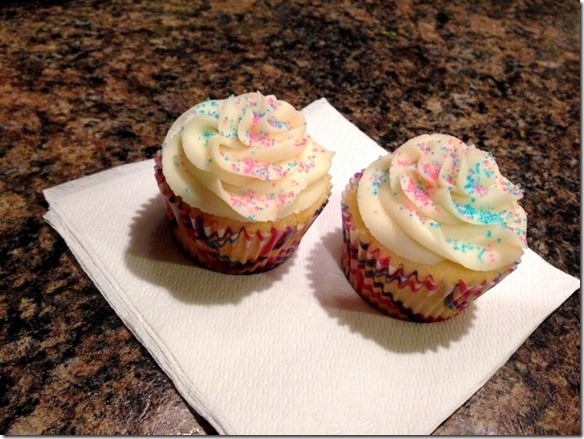 And if you ask me, any night that ends with cupcakes is a good night.

« There Were Cupcakes
Thoughts on a Thursday »