Well good morning, to all of my favorite readers! How’s everyone doing today? Although today is a WIAW post, it also turned out to be somewhat of a lengthy one, so it’s a little mix of both for ya today.

Although parts of yesterday totally sucked (you’ll see below) it all turned out okay, so all is well over here. Just a slight bump in the road, I suppose. So let’s go ahead and get to the food, first and then we’ll get to all the rest!

I almost forgot to snap a photo of this one! But shortly after I got in and got settled at work, I snacked on a banana and half of one of the cinnamon Greek yogurt bran muffins that I’m currently loving. 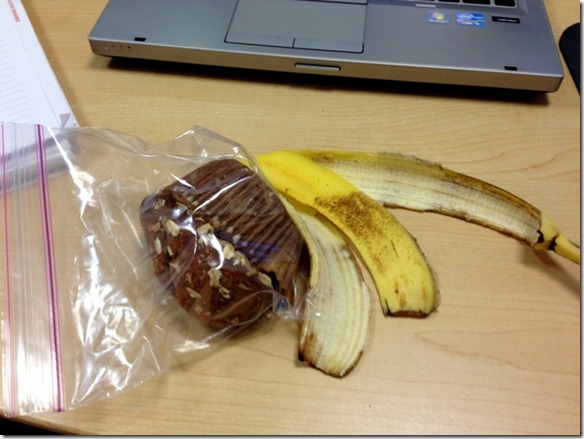 The muffins are delicious, and I’m actually pretty glad that I have no idea what the nutrition facts on them are. It would probably make them much less enjoyable.

I had to leave work around 11 for an appointment with the asthma specialist, so I made sure to eat another snack before I left, since I knew I’d get hungry. A lemon Chobani with blueberries was where it was at 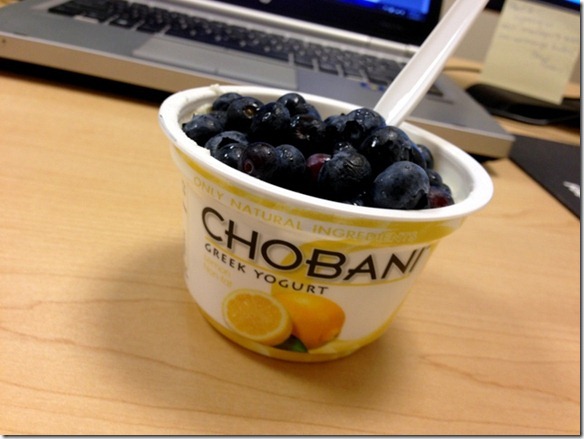 As far as the appointment with the asthma specialist? Well, to put it simply, it was the absolute WORST experience with a doctor I have ever had in my life. The doctor I saw (which was not the same one I used to see) was just awful. AWFUL.

So the main reason for my appointment was because a) the cold that I have has really caused my asthma to flare, and b) I wanted to know what medications were safe to take while pregnant, since the other one I had previously been on (but not taken regularly like I should) is not.

The doctor first started by telling me that my test results were “absolutely terrible,” that I have extremely inflamed lungs and a respiratory infection. Ok, great. He THEN proceeded to tell me that if I don’t change the way I treat my asthma immediately, I will basically do extreme harm to the baby. I mean, he basically said, in so many words, that I was going to kill my baby, which immediately sent me into a downright panic.

As I sat in the office listening to this man basically berate me for my “poor asthma control,” it took every ounce of me to not either explode in his face or break down and cry. Luckily, I maintained my composure and was still able to tell this man once he was finished that he was extremely rude and that I will never be back to see him again. And then I went out to the receptionist and the tears started flowing.

The appointment was a bit of a shock, to say the least. I, obviously would never, EVER do anything purposely to put the baby’s health in danger, which is why I made the appointment in the first place. I knew my asthma was bad right now with the cold (which is why I went in in the first place) but I didn’t realize that it’s that bad, and has been for quite a while apparently.  I’m now on prednisone (an oral steroid) for 6 days, and have a new inhaler that is safe to take everyday (Pulmicort). But I didn’t immediately take the prednisone…as soon as I left the office, I called my OB/GYN, and my PCP to get their opinions. I also wound up talking to another doctor at the asthma practice, and they all said the same thing: the jerk of a doctor was correct to prescribe what he did (it’s safer to be on it for a few days then wind up having as asthma attack), but he was all wrong about how he went about it. Umm, yes. Yes, he was.

The whole thing was really pretty eye opening though, and there was one thing that the doctor said that stood out to me; he said that I’ve probably become so used to “terribly” controlled asthma, that I don’t even remember what it feels like to have a clear set of lungs. That, to me, is pretty scary and made me realize that I really do need to pay closer attention to it. I’m sure I’ll have updates on this as I continue on with my treatment, since there is somewhat of a stupid backstory to it all.

I totally didn’t mean to make this mini update so lengthy…but, as you can probably tell, this whole appointment definitely threw me for a loop!

By the time I got back to the office and settled in, I was just emotionally drained. I grabbed my lunch, shut my door, and just took a few minutes to breath and eat. 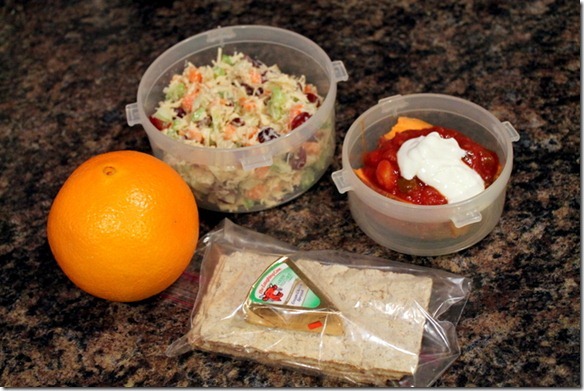 The first part of lunch I dug into was the chicken salad that I made last night. It. was. SO. good. Here’s the details: 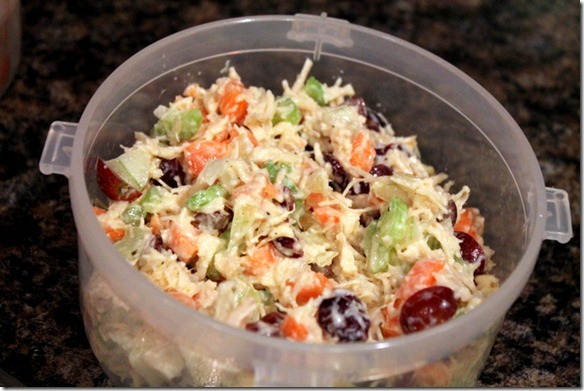 I ate the chicken salad both with a fork and scooped up with a few Wasa crackers (I didn’t wind up eating the Laughing Cow cheese that I packed) and also had the orange.

Around 3:00pm, I decided to have the rest of my lunch, which was another baked sweet potato with salsa and Chobani. 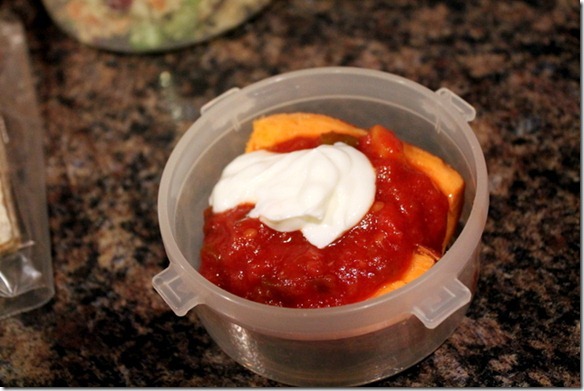 After work, I had a fitting appointment for my bridesmaids dress for Mal’s wedding next month and, well, that was interesting. When we ordered the dress (back in July?) we purposely ordered it a size larger than we thought, thinking it’d give us extra room to take it in if needed. Welp, thank goodness that we bought a size larger because now this dress needs an extra panel added to it because it’s way too snug! I’ll have to go back 10 days before the wedding to see where the “bump” is at, and then they’ll finish altering it from there. Yikes…that was not expected.

I’d been looking forward to this meal ALL day long, and it was mostly because it involved Cheesy Italian Quick Bread. Jay and I seriously love this bread. Like, a LOT. 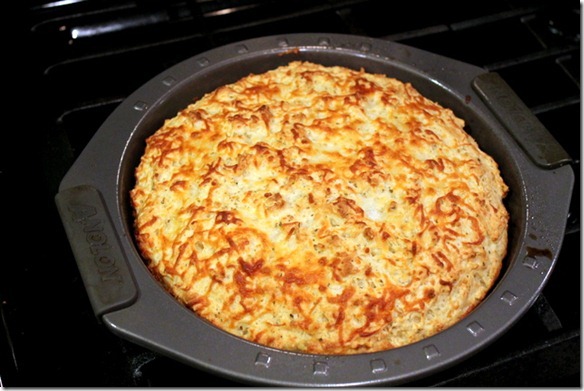 It also served as the perfect accompaniment to go along with the homemade soup that I cooked up yesterday. 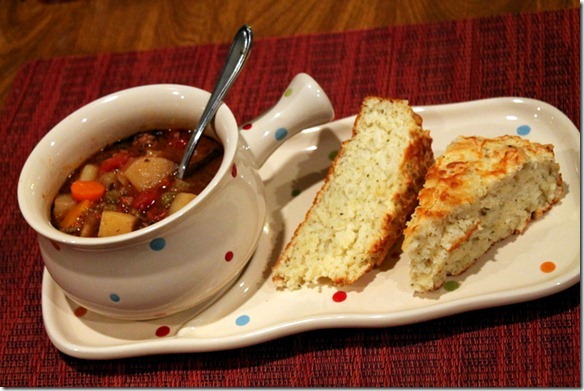 I had actually cooked up this soup in the slow cooker yesterday, but we saved it for today since Jay wasn’t home last night for dinner. I am happy to say that this recipe turned out awesome, so I will be sure to put together the recipe to share ASAP for you all! 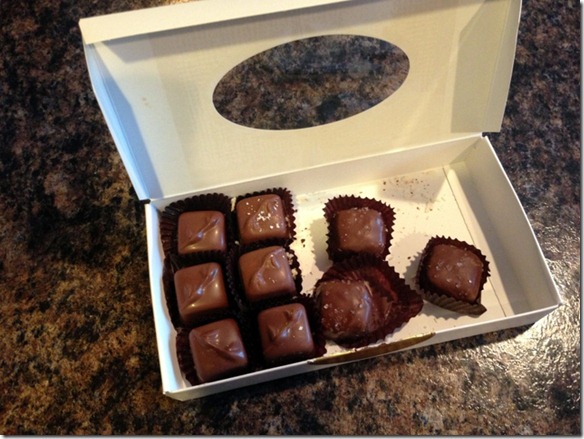 I finished off the night with a couple of pieces of chocolate, which were totally necessary, in my opinion.

So hey, there’s my Tuesday, in a nutshell. Thankfully, I have no appointments on the agenda for today.

Have you ever had a bad experience with a doctor?

« A Look Back at 2012
Slow Cooker Lean Vegetable Beef Soup »