Hello and good morning to you!!

First things first, a little housekeeping. I know that many of you reached out to me on Friday and over the weekend to let me know how funky my blog was showing up in BlogLovin’. Along with that, we also discovered that my posts on Thursday and Friday were never sent out to those of you who are email subscribers! Thanks to some behind the scenes assistance, it seems as if things are back up and running smoothly, so you should no longer be seeing comments published as posts in BlogLovin’, and email subscribers should be receiving the correct emails. Sheesh!

On another note, this actually all appeared to be unrelated to the other things I’ve been working on behind the scenes, but I can tell you that I’m super excited about them all! In fact, one of them is ready to share with you right now – an improved Meal Planning page! The page now displays all of my weekly meal plan archives with thumbnail images, making it a bit easier to navigate. Hopefully you guys enjoy the update! There will be more coming your way soon. 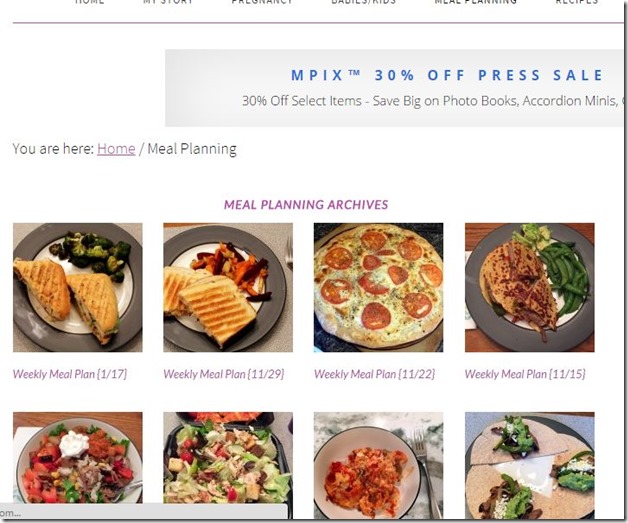 But as for today…let’s do some WIAW!

Truth be told, my appetite has been super weird the past couple of weeks. One day, I’m ravenous. The next, my stomach is so uncomfortable that the thought of eating just does not sound appealing. Of course I still eat, but those days tend to have fewer snacks. My doc said it’s likely just my uterus expanding/pressing up into my diaphragm, meaning I’ve still got a good 4 or so months left of it. But hey, it is what it is, right?! Could be worse things.

So here’s a look at mostly Monday, but a little bit of Tuesday too, because there was some good stuff.

A cereal combo! How long has it been since I shared one of these?! This one included some Kashi Go Lean Crunch + Quaker Oatmeal Squares with blueberries and almond milk. So good! 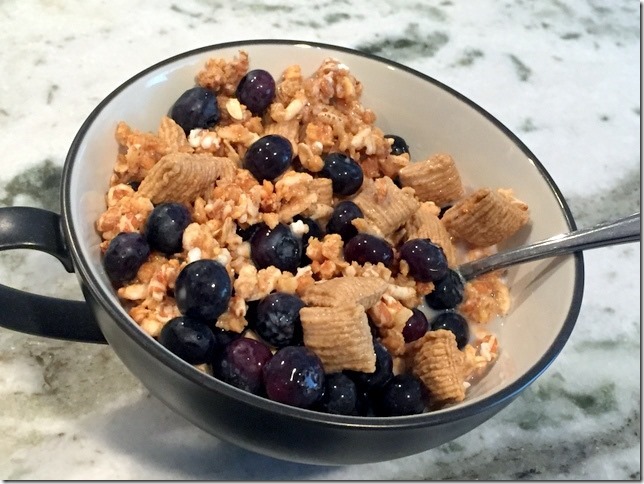 And speaking of bringing back old favorites…check out yesterday’s breakfast. The waffle sandwich! 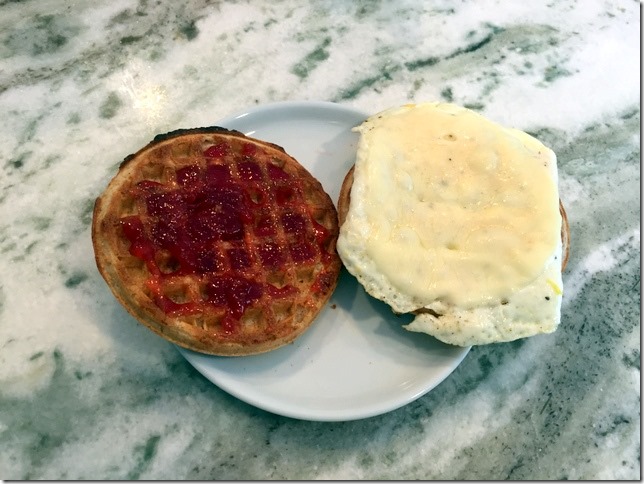 I fried one egg, topped with provolone, and paired it with some strawberry jam on top of two waffles. This used to be an obsession of mine back in the day, and it was so, so good. Something I may try to make time for in the mornings when I still have to go to work (this week has been different since I’ve been working from home with this stupid pink eye…).

I didn’t wind up having a morning snack on Monday, but I did have one on Tuesday… 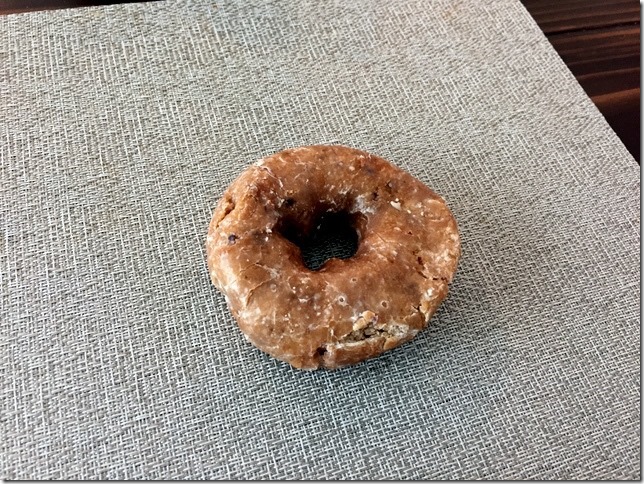 Ohhhh, you blueberry cake donuts from DD’s. You are my nemesis.

My MIL was over to watch Lucas on Tuesday, and after their morning at the museum, they always stop at DD’s for donuts. Have I mentioned I love Tuesdays?

Monday’s lunch was fantastic. I felt like I needed to get in some greens, and since I hadn’t taken the time to do much food prep over the weekend, I made up three extra salad bases while making my main lunch one. 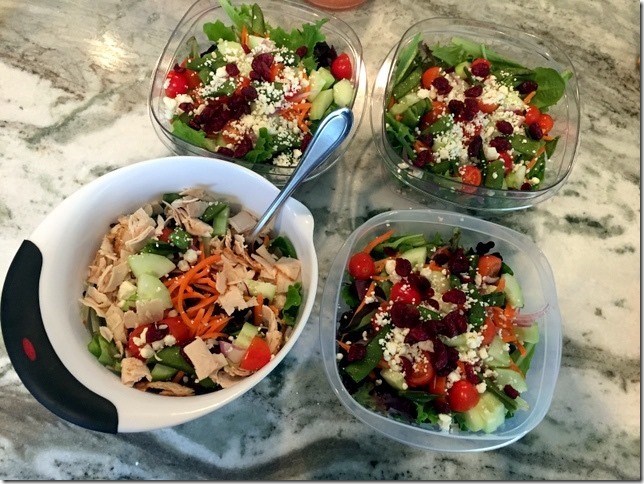 The bases all have mixed greens, cucumbers, grape tomatoes, shredded carrots, red onion, feta cheese, and dried cranberries. Then the salad I had on Monday got some deli chicken, avocado, croutons, and balsamic vignette added in.

And THEN, I got crazy and decided it had been way too long since I’d had a chopped salad. 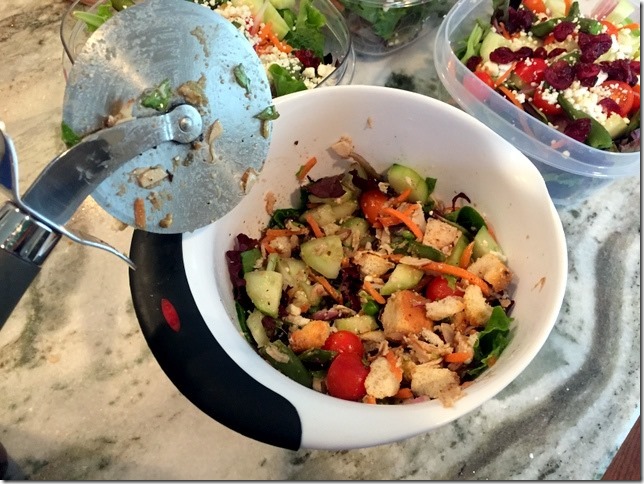 Seriously, what IS it about chopped salads? They’re at least 101x better than a regular salad?!? I need to do this more often. 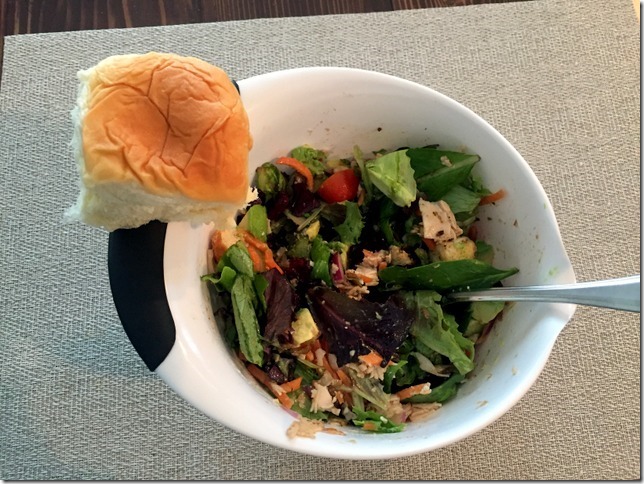 Oh, and my salad was also paired with a King’s Hawaiian sweet roll because, well, they’re heaven.

I really wasn’t even hungry for an afternoon snack on Monday, but I had offered Lucas a peanut butter Kit’s Organic bar, and he only ate about 3 bites of it. So I finished off the rest. 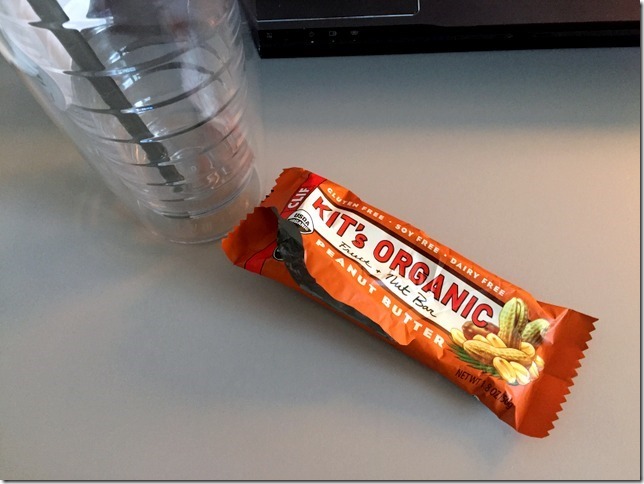 Dinner was totally delicious, thanks to our cooking of a whole chicken in the crockpot. Seriously, you guys need to try this…I’m going to share the recipe I used with you hopefully tomorrow if I can get my act together. 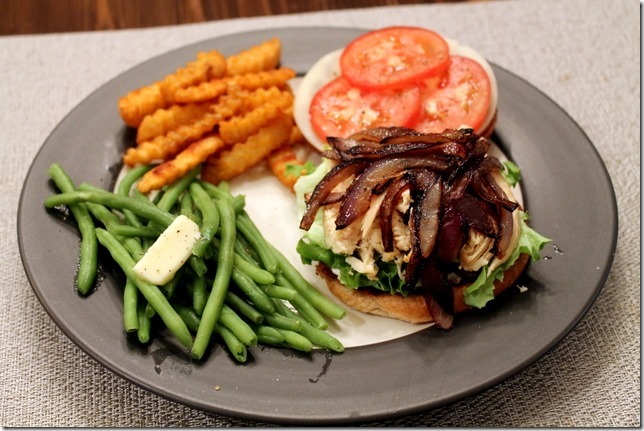 With the cooked chicken, we sliced it and made chicken sandwiches (mine with lettuce, tomato, provolone, and sautéed red onion), and paired them with some french fries and green beans. It was a simple, yet super satisfying dinner.

On Sunday, I was craving something sweet after our snacky-filled Super Bowl, so I wound up whipping up a quick half batch of something very similar to my favorite Chewy Chocolate Chip Heath Bar Cookies. FYI: You may have noticed that I’m in the midst of updating some of the recipe layouts on some of the recipes, such as the one for these cookies. Hopefully you like the new layout so far! 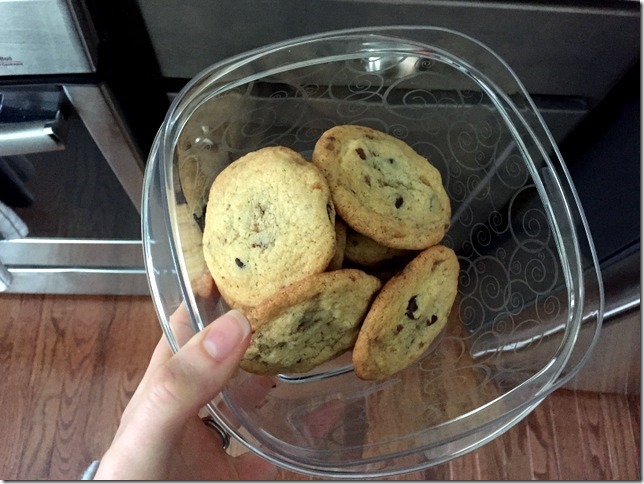 And that’s a wrap! My meals and eats really have been all over the place lately depending on how my stomach feels, and I know I could be doing better about laying off the sugar a bit and adding in some more veggies. But you know what? I do what I can, when I can, and that’s really all I can do right now. Some days are better than others, which I’m sure we can all attest to, right? It’s just nice to not have it be something I sweat over anymore. It all balances out.

How about you guys? What have you been loving lately? What’s one thing you need to bring back into the rotation ASAP?