Are we all feeling super lovey-dovey this morning? Honestly, Jay and I both totally forgot that it was even Valentine’s Day, and didn’t realize it until we flipped on the news this morning. Who knew?

We actually decided a couple of weeks ago that we were going to pass on partaking in the festivities this year. For one, I’ll be working all evening and won’t see him until late tonight. Second, we technically already sort of celebrated early. And third, we’re going on vacation in three days…no need to spend money on flowers, and I really don’t need that big ‘ol box of chocolates right now, ya know?

Usually we at least get a card for each other but get this…we also both forgot to give each other our respective anniversary cards, so we decided just to exchange them instead. Boy, we are romantic pretty lame, aren’t we?

Neither of us have ever been huge on Valentine’s Day. Last year, we enjoyed a delicious dinner in, and the years before that really haven’t been all that different. Actually, I think my favorite Valentine’s Day is actually when Jay and I were broken up.

My friend Eileen and I were both single at the time, in grad school, and just really dreading the holiday. So we both decided to go out dressed in all black, went and sat at the bar of Houlihan’s restaurant, got a little lot silly on flavored martini’s, and then went and saw a movie. I have no idea what the movie was, but I do remember that it was not a comedy, yet we both found it hysterically funny. 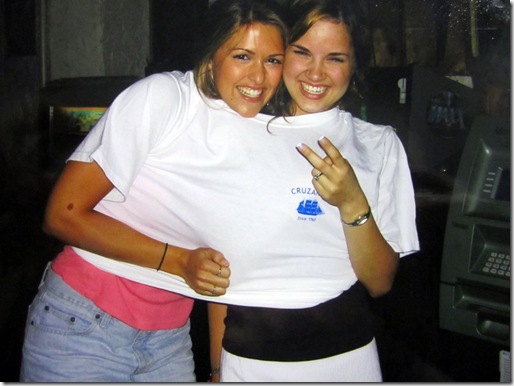 Because we’re going to be away, we’re trying our best to get through this week without doing any extra grocery shopping. I really hate wasting food, so we’re making the best of what we’ve got. Not too shabby, right? 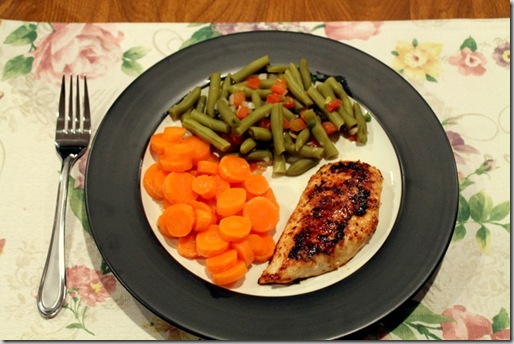 We had some chicken breasts in the freezer, so we pan fried them with a little Italian dressing, and served them along side a box of frozen carrots and a can (eeek!) of green beans, which I combined with the rest of Jay’s super bowl salsa. 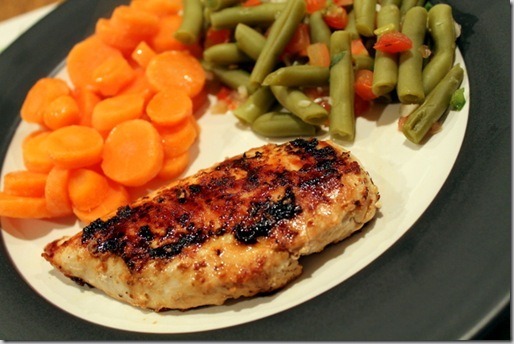 Nothing great, but it did the trick.

This morning, I woke up nice and early, despite not having to be to work until later this afternoon. I have a lot I want to get done today, so I decided to get my workout done and out of the way. It’s been tricky choosing exercises that don’t incorporate much upper body, so I decided to break out the ‘ol 10lb. Slimdown Xtreme.

Those two videos combined are a great, 50-minute workout! Whew!

Once my workout was finished and I showered up, it was time for breakfast. I decided to switch things up a bit, by my goodness, I am SO glad I did. 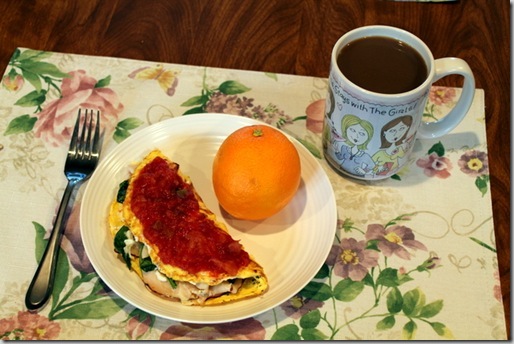 I was craving savory, oddly enough, so I made myself a turkey, cheese, and greens omelet. 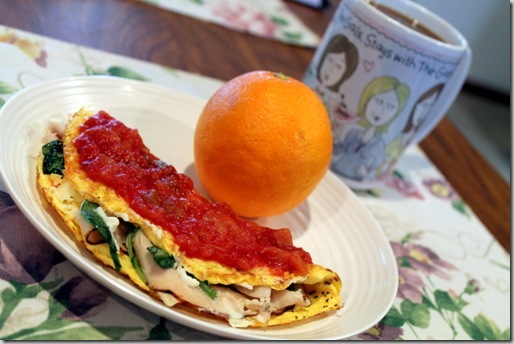 I simply tossed a couple slices of deli turkey + a handful of greens into the skillet for about a minute to heat it up and get slightly crispy. Next, I cooked the eggs, added in the turkey and greens, and then smeared in a full wedge of The Laughing Cow Light Swiss Cheese. 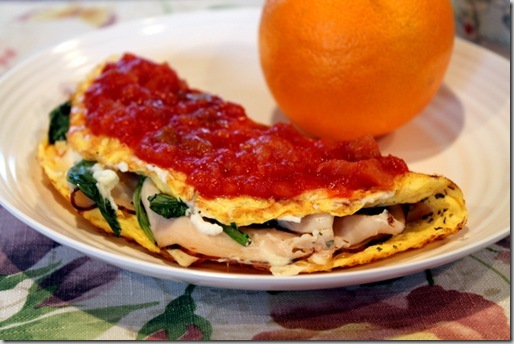 I topped it all off with some pineapple salsa, which made for one heck of an awesome omelet. I’d definitely recommend trying it.

On the side, I had another cara cara orange, which I have been eating lately like it’s my job. Two yesterday, another today, and possibly another one later on. 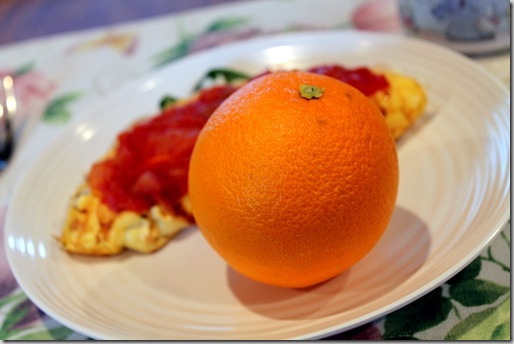 Alright friends, time to get productive. I have quite a few posts I’m working on putting together for while we’re away this week and I really think you’re going to enjoy ‘em. A couple of recipes, a few workouts, and a few giveaways, too! WOOP!

How are you celebrating Valentine’s Day?

« Sweaty Cardio, No Bicep Curls
Checking In On The Bulging Biceps »