WELL…here’s to hoping that today is a gazillion times less hectic than yesterday. Work was ca-raaaaaazy busy and when I say I was on the phone for hours on end with airlines and travel agents, I’m not even kidding. Woweeee. On the plus side, it did make the day go by super quick…on the negative side, I didn’t get much of a chance to think about anything other than what I was doing.

Soooo, last night I started roaming through my phone (while taking breaks from playing Candy Crush, of course) and realized there were a few yummy (and funny) gems on there that I haven’t had a chance to share with you all. Not that they’re anything all that super exciting, but hey, I felt like chatting today.

Now tell me…how many of you guys love snack plates just as much as I do? 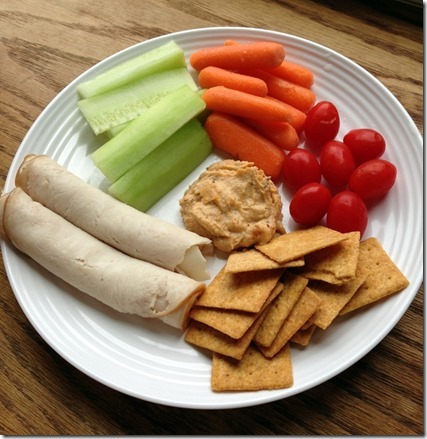 Not only do I love having all the different colors, but I just love all the variety of flavors. Turkey + provolone roll-ups, Kashi crackers, veggies, and hummus. I’m pretty sure that this was eaten over the weekend at least three weeks ago, but now after seeing it again I’m ready for another one.

Last week, there was a random day where a few of us at work were originally planning on going out for lunch, but then plans fell through. Of course, I didn’t bring my lunch since I thought we were going out, so I wound up running out to Bruegger’s to grab a “veggie bagel” with hummus. 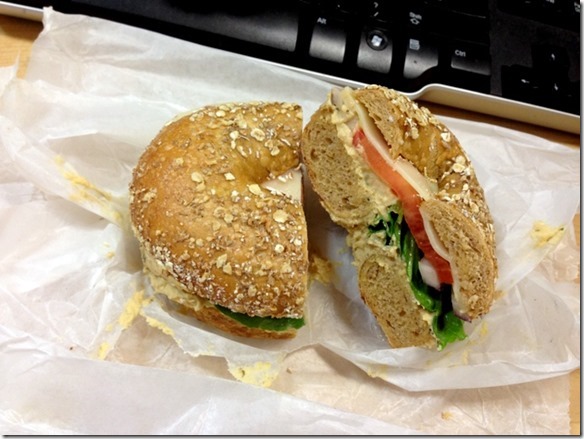 I put “veggie” in quotations, because apparently their idea of a veggie bagel was lettuce, one slice of tomato, and onion. I mean, it had good flavor, don’t get me wrong…but when I read “veggie bagel,” I want LOTS of veggies!

A couple weeks ago, Jay and I got a little carb crazy with one of our weeknight dinners. Nothing like a box of Annie’s (I think these were some sort of parmesan noodles?) and some chicken sausages with sauteed peppers and onions. Oh, and ketchup. Duh. 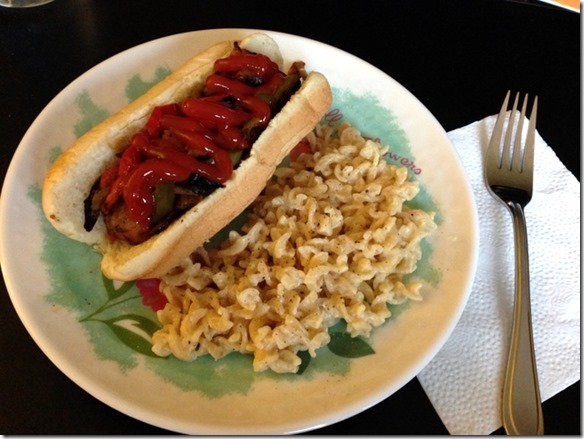 The more I think about it, I’ve actually been craving carbs – especially pasta – quite a bit this past month. Although I do crave them all the time, they’ve just totally been my go to as of late. Can’t. Get. Enough.

Now here’s a funny little story for you all about our pal, Cody. 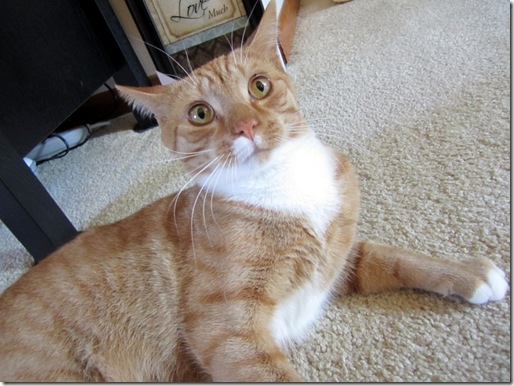 Because of my allergies to the little furball, we always keep our bedroom door closed off. During the day, or as long as we’re not actually in the room, this is not an issue. But as soon as we’re in the room and Cody knows it, he will sit at that door and scratch away at the carpet until someone comes back out.

So when it comes to bedtime, we basically build a barricade in front of our door, complete with a piece of foil on the floor and three pillows stacked up in front of the door. Why the pillows too? Oh, well that’s because he’ll still get all up on that foil and just constantly scratch on the door from his hind legs. He’s a piece, I’ll tell ya.

The other morning, I opened the door only to see that he happened to find a new way to enjoy the pillows… 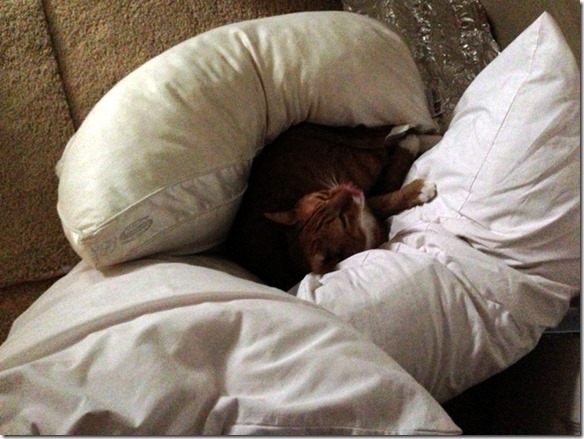 Little guy apparently made himself a nice big bed out of all the pillows and my gosh did he look comfy. 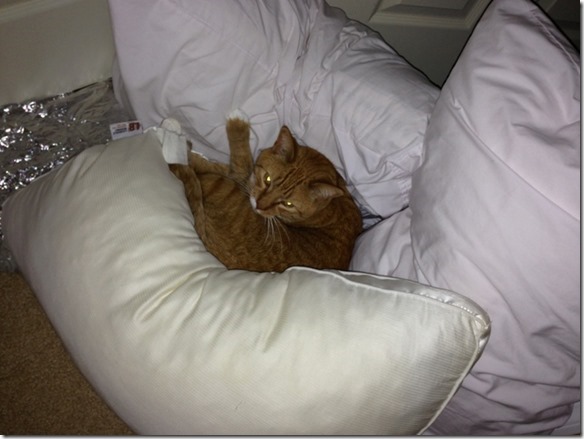 I’m just glad he stayed there long enough to grab my phone so I could show Jay what he was up to. Too funny.

Soooo yeah…that’s what I’ve got for ya this morning. A little random, but hey, who doesn’t like a little randomness every now and then?

By the way, the Baby Tooth page was updated this morning, complete with a sneak peek of the (not quite finished) nursery!

Have a great Tuesday, everyone! :)

« Another Date Night, While We Can
Baby Tooth: 38 Weeks (and Nursery Before & After) »