Well, it was a fairly quiet weekend over here, but that was a-okay by us.

I only left the house once, didn’t touch my shampoo or makeup bag, and we were able to be fairly productive around the house, too.

Kicking off the weekend, we had our Thai takeout, followed up with some insanely large cups of fro yo. 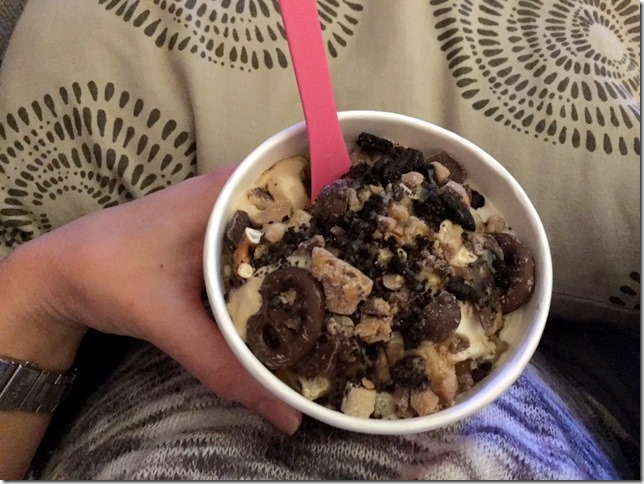 I totally blame the baby…I just had to have it. And I’m going to miss having that excuse in a couple short months.

Saturday was a good one. We spent the morning playing around the house with Lucas, then once he was down for a nap, I was able to get a little blog work done and squeeze in a barre workout. 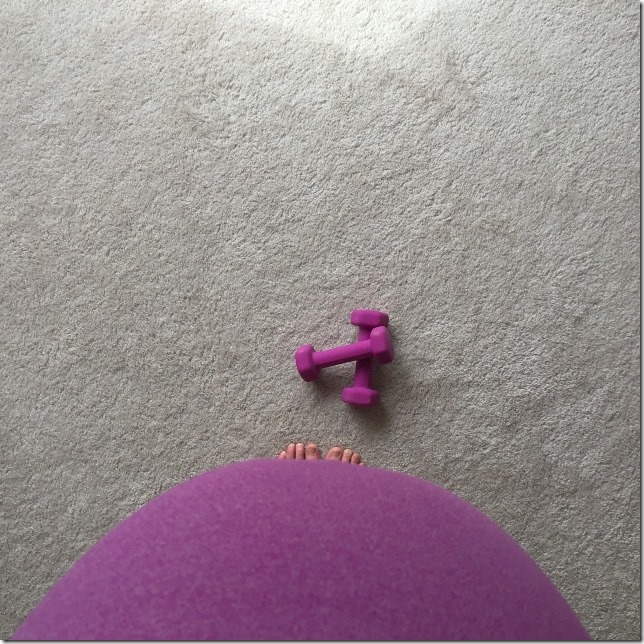 The toes are slowly disappearing down there!

After Lucas was up from his nap, he wanted to go visit my parents, so I dropped him off for a couple of hours so he could have some “nan nan and papa” time. I love that they’re so close! They went bowling and out for ice cream – lucky guy.

He wasn’t the only lucky one, though. I got to take a solo trip out to Hobby Lobby and ended up getting a few picture frames for Lucas’s room, along with a new clock for our living room. Check it out! 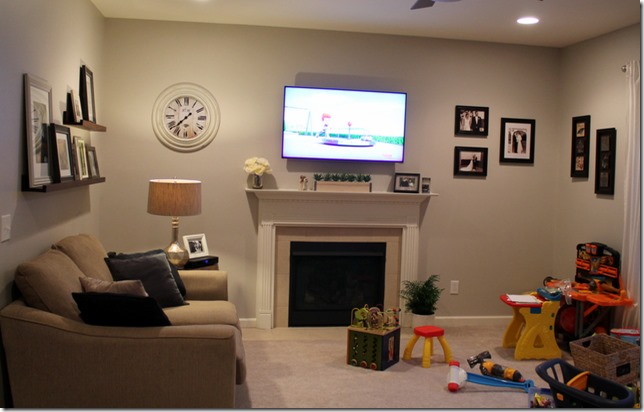 We rearranged our couches once again, moved our wedding photos to the right of the TV (which used to be on the left), hung the clock over there, and then finally got up our completed picture ledges! 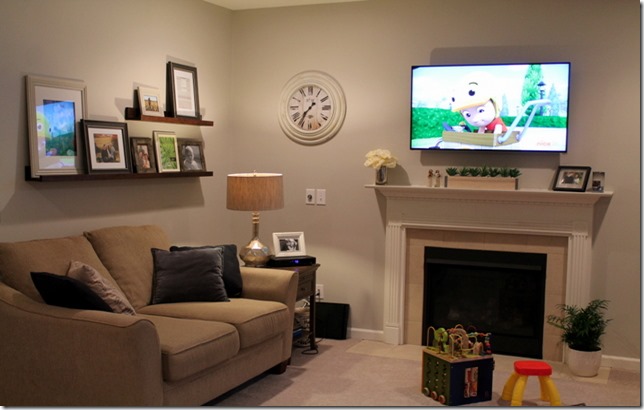 I’m SO thrilled with how they turned out (we used this tutorial, if you’re interested – SUPER easy!), but I’m still working on figuring out the frame arrangements (and filling them up, if you couldn’t already tell). 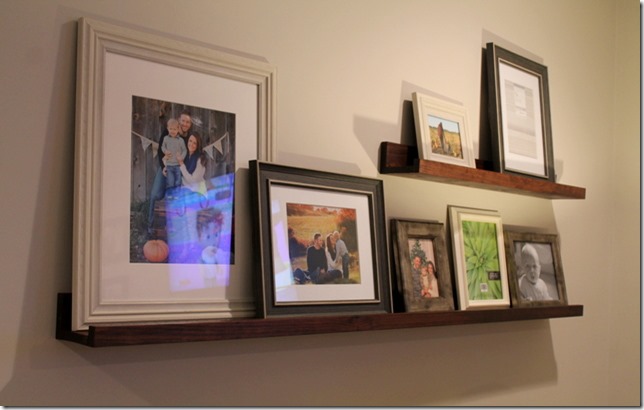 But overall, I’m really pleased with how things are coming together in there! 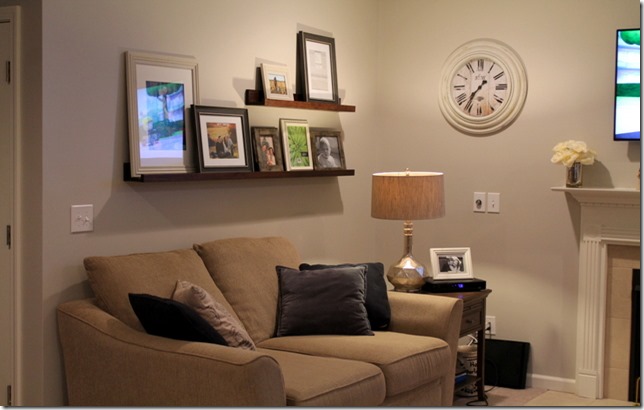 Also exciting is how things are coming along in the basement! During Lucas’s nap on Sunday, I helped Jay out with finishing up the insulation so now we’re ready to get going on the sheet rock. 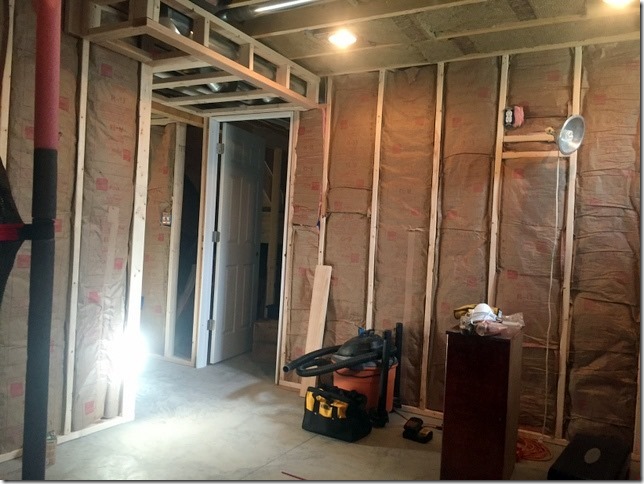 We’ll hopefully pick some of that up this week and be able to work on it here and there in the evenings once this guy goes to bed. 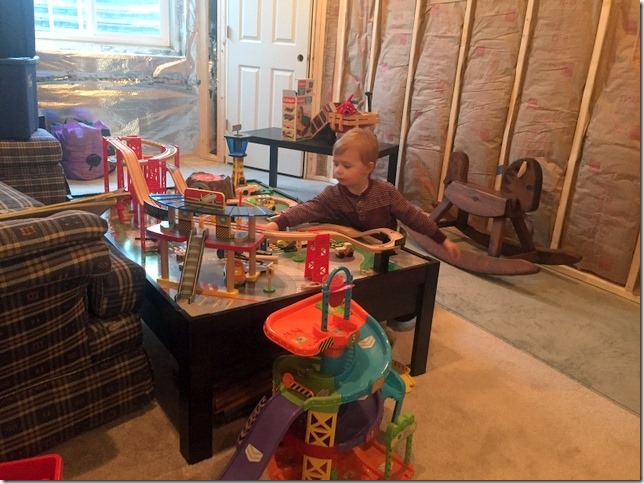 As for the rest of the weekend? You didn’t miss much! I was too lazy to go grocery shopping (which I’ll fully regret come today), we did some more cleaning around the house, and I even had a special helper to help me bake up some cookies on Sunday. Too bad I forgot to tell him that we start off slowwww with the mixer…not all the way up to max speed. 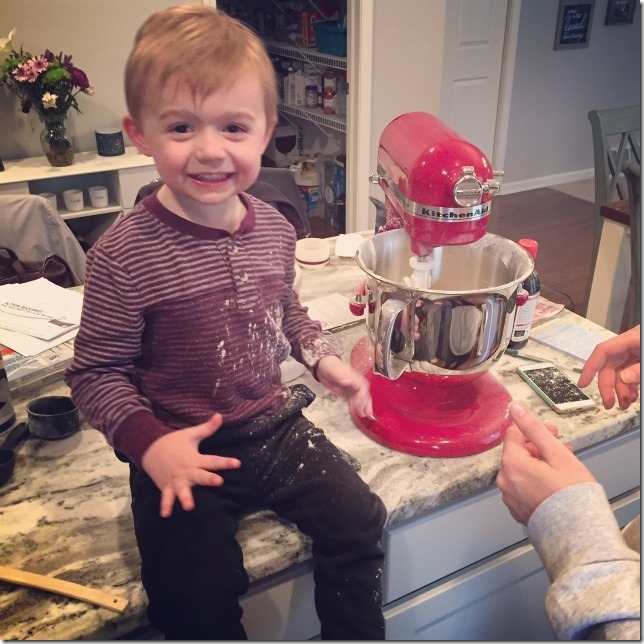 At first he seemed super nervous, but then I started laughing, he started laughing, and we all got a good chuckle out of the messy kitchen (that had just been swept not a half hour earlier…). Ohhh, but I loved every minute of it! <3

We had a simple but delicious dinner of tilapia, baked sweet potatoes, and zoodles (yum!). 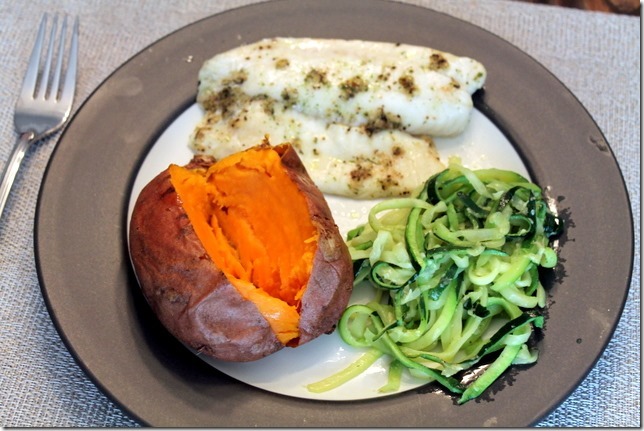 And last but not least, Cody is still doing well, despite the fact that he looks miserable for me taking his picture in that darn cone. 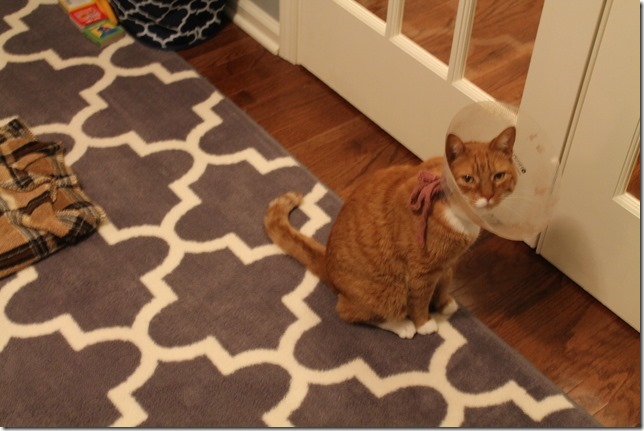 We have to keep him secluded to a small room for two weeks, so we’ve got him all set up in our office with his food, water, litter box, and a little blanket bed. He still stays fairly low key most of the day, but we go in and chill with him throughout the day so he knows he’s not alone. He still seems to be responding well to everything, so we’re feeling good about our decisions to go forward with the surgery. My biggest fear was (and still is!) that we’d pay all that money and it wouldn’t work. But so far, so good!

How about you guys? Did you have a great weekend? Do anything fun or exciting? Anything good planned for the week ahead?