Well hello and good morning to all of my favorite readers! How’s everyone doing today?? Fun Fact: one month from today until my birthdayyyy!  But who’s counting?

SO I don’t know…maybe it’s from the extra sleep I got last night, but I am feeling pretty peppy, as if you couldn’t already tell. Last night included lots of wonderful sleep; I was in bed just before 10pm (Jay basically called me a party pooper – I didn’t argue that comment one bit), and spent about a half hour reading before giving in to the sleepiness. Nine hours later, and I was almost a new woman…until about 6pm tonight.

Before heading to bed though, the two of us did manage to have a nice coffee table dinner + movie night at home. 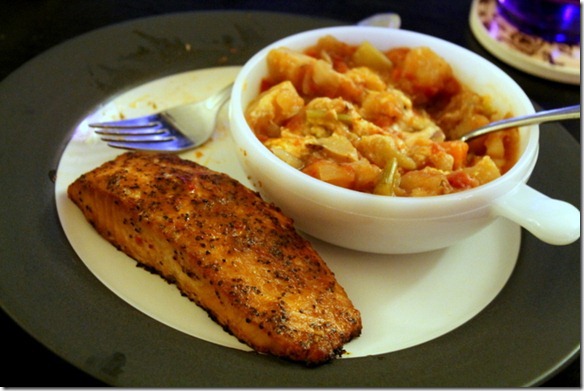 We decided to make another small dent in our Omaha Steaks order, so he cooked up a piece of chicken and I chose a piece of marinated salmon. The salmon was good, but it was actually pretty salty; I’d say I ended up eating about three-quarters of it. On the side, I had a mini bowl of veggie stew as my attempt to get some veggies in for the day.

Shortly after dinner I was hungry once again…my hunger was out of control last night. 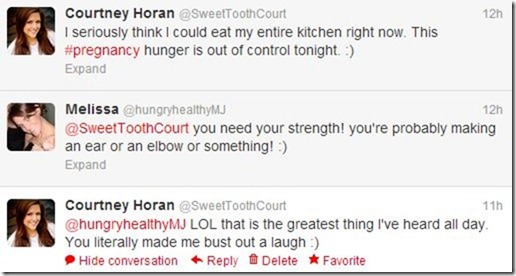 And that tweet from Melissa totally struck me funny and literally had me laughing out loud. Maybe she’s right though…I guess we’ll find out tomorrow with a new update!

So I wound up eating a bite-size leftover brownie, a small mug of cereal, and a handful of the most dangerous cracker slash cookies on the planet…and I probably could have kept going if it wasn’t for my strong desire to head to bed.

For the first time in quite a while, I woke up with a craving for oatmeal for breakfast. Besides the cup of hot oats I had a couple days ago, I haven’t really been feelin’ the whole “make my oats from scratch” thing lately. 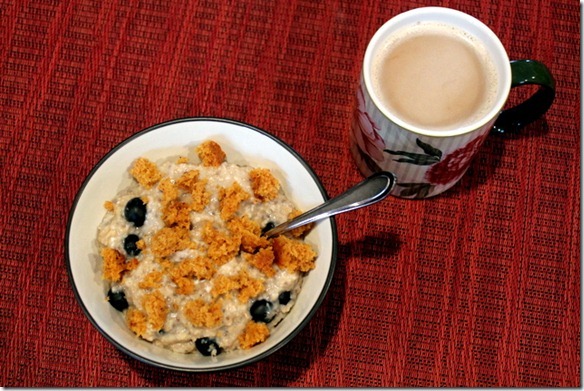 But today’s bowl was GREAT. I made a bowl of custard oats the same way I make my pumpkin custard oats – just minus the pumpkin – added in a few blueberries, and topped it with half of a crumbled piece of pumpkin bread. So good. 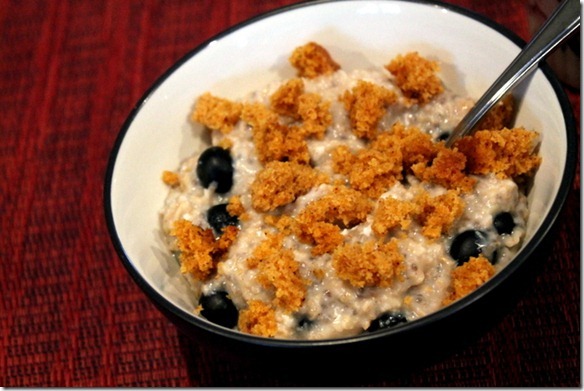 To go along with my oats, I brewed myself a chai latte in the Keurig, and I must say that it is pretty delicious. 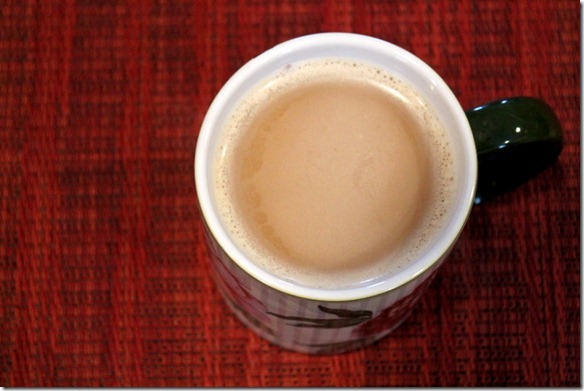 Today we’re actually heading out of the house (we didn’t venture out at all yesterday with the snow) which will be nice, because I think my asthma is telling me I need some fresh air. This afternoon, we’re meeting up with a few of our cousins for lunch, and then I’m *hoping* I can convince him to stop at the grocery store with me quick to pick up some stuff for the week.

If you’ve been reading for any amount of time, then you probably know I’m not much of a meal planner. However, now that things have changed quite a bit over here, I’m going to attempt to be at least a little bit more prepared. My first area of inspiration was Pinterest – sometimes I like to check and see what recipes of mine people are pinning, and I came across a few this morning that are possible contenders:

We really only need meals for Tuesday, Thursday, and Friday (Monday is a NYE party, and Wednesday is our anniversary dinner) so those may just be my winners. We’ll see what the boy says.

Enjoy the rest of your weekend, everyone!