Have I seriously not done a legit Day in the Life post since MAY?! I had to go back and check that blog category, but (save for a few random posts I threw in there) it’s true. I think that means one thing…it’s time for a new one!

5:38am – Second alarm goes off. Time to get up for my morning workout! Thanks to having my clothes all laid out the night before, I roll into them in the dark, head downstairs and grab some water and my computer, then head to the basement. I know, my workout area is so fancy, right? 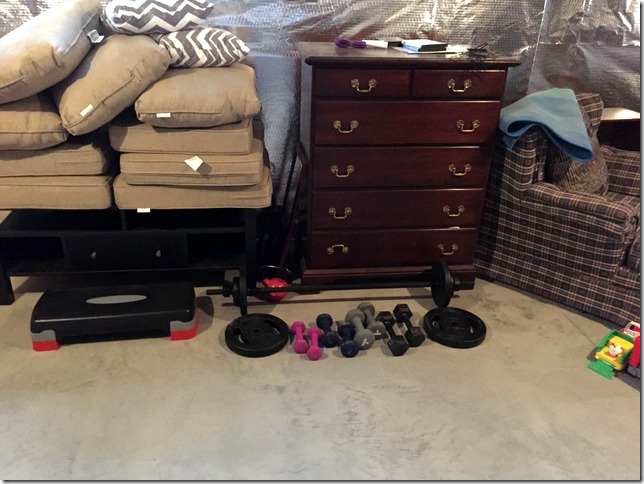 Today’s workout is a kickboxing/barre workout that I found on YouTube a couple of weeks ago and I love it! I’ve done it quite a few times recently and it works up a great sweat.

6:25am – Workout is finished! Chug some water, then head upstairs to shower and get ready for the day.

7:15am – I hear Lucas stirring in his room so I finish getting dressed and go to greet him. 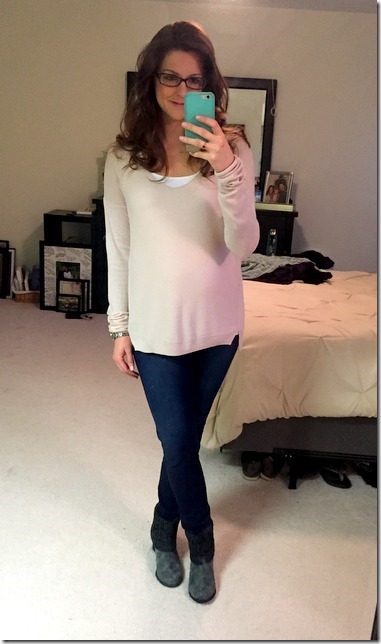 7:20am – Hang with Lucas for a bit, get him dressed, then we head downstairs. Thankfully, I had prepared all lunches on Sunday night, so things were a little less chaotic in the kitchen that morning! Lucas had a small snack and his vitamin and I snacked on a couple of graham crackers.

8:00am – Arrive at daycare. Chat with his sitter for a bit and, surprisingly, get a “Bye bye, Mommy! Love you!” from Lucas. Umm, say what?! He usually hates when I leave, so this was a pleasant surprise and a nice way to ease into a Monday.

8:15am – Arrive at work. Log in, check emails and get through anything initially waiting for me, which only takes a few minutes. Head to the kitchen to brew a cup of decaf and heat up my breakfast. 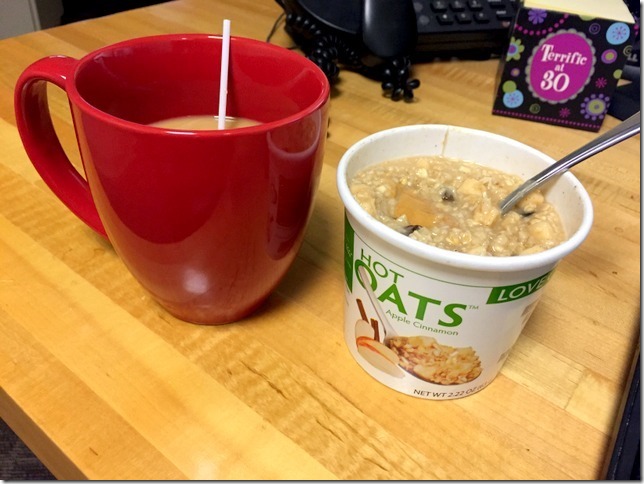 A cup of apple cinnamon hot oats from Love Grown Foods (love them!) with a huge scoop of peanut butter + some raisins added into it.

9:00am – Phone conference meeting with a co-worker and another new co-worker located in the UK. Not only am I due in June, but my other co-worker is also pregnant (with twins!) and is due some time in February. It’s going to be a crazy few months while she’s out, but thankfully, we have someone new on board and we’ve been working on getting everyone caught up to speed.

10:00am – Finish up phone conference and get back to working on some other work. The morning is going pretty fast!

10:30am – Start to get hungry (nothing seems to keep me full for too long these days) so I snack on a banana and Kit’s Organic peanut butter bar. 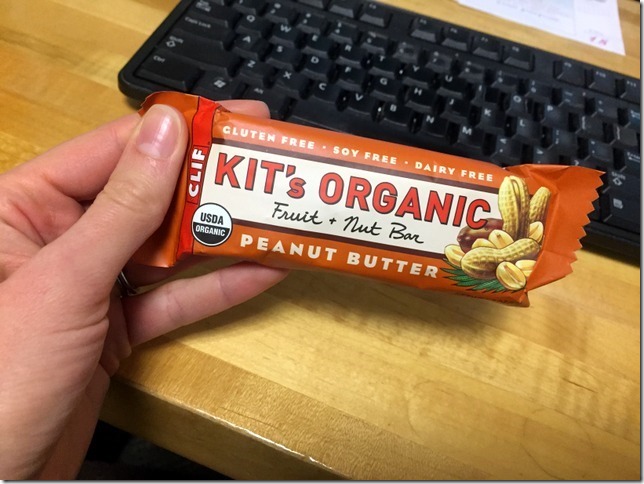 Recycled photo, but I’ve got a nice big stash of ‘em. They’re a favorite of mine right now!

11:00am – Another quick meeting to over a few outstanding items and we’re finished in about 10 minutes. Just how I like it!

12:30pm – Time to break for lunch. I prepped a few salads for myself during the week and am totally LOVING them right now. 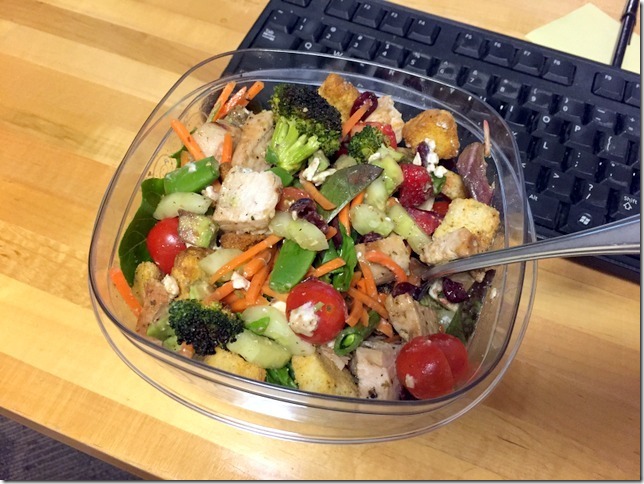 Basically one of my favorite salad combos right there – loaded with all sorts of good stuff.

I debate on heading out on my lunch hour but realize there isn’t really anywhere I need to go and, if I did, I’d likely end up at Target which I already need to go to after work. So I hold off and stay in.

1:00pm – Work, work, work! Pretty sure there was an afternoon snack involved in there somewhere, but I don’t have photo proof. I think it may have been some almonds and a mini Snickers bar though? (I’m still so much about my sweets it’s not even funny…).

3:40pm – Arrive at the sitter’s house. I’m greeted with the best “Hiiiii Mommyyyyyyy!” and find out he had a good day (he napped AND ate, so it’s a win).

3:50pm – Get to the car and head to Target. Over the weekend, Jay and I had looked at a potential rug for the office but had decided not to get it that night because we were in a rush. After talking it over some more, we decided we should get it to see if it works…and I love it!

4:25pm – Arrive at home, we both change into some of our cozy clothes, and then have Lucas help me roll out our new rug(s). 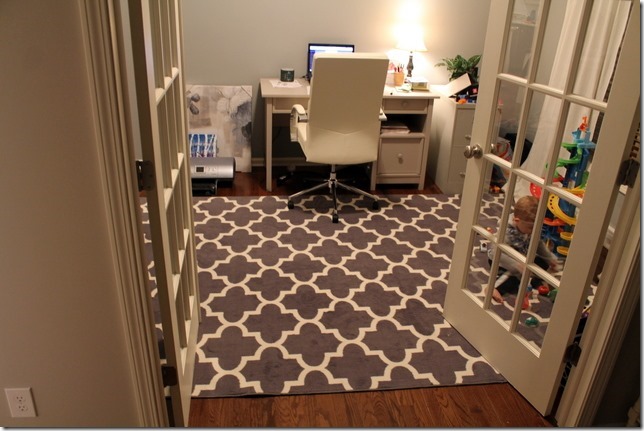 I got THIS RUG in gray and I love it so much more than the rug we initially had in there. For one, it’s a 7×10, which I think just fits the room better. And it’s also thin enough to fit underneath the French doors, which was a problem with the previous rug. 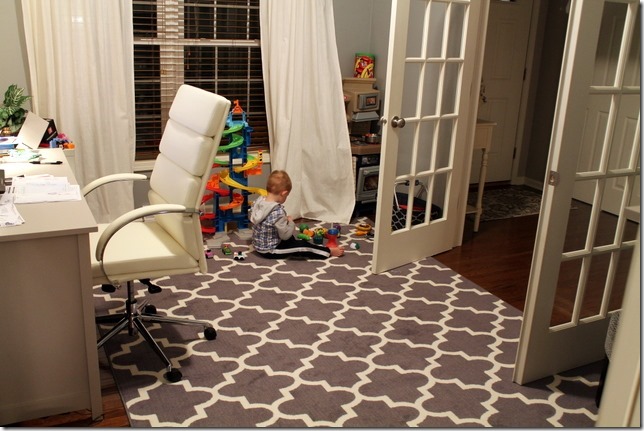 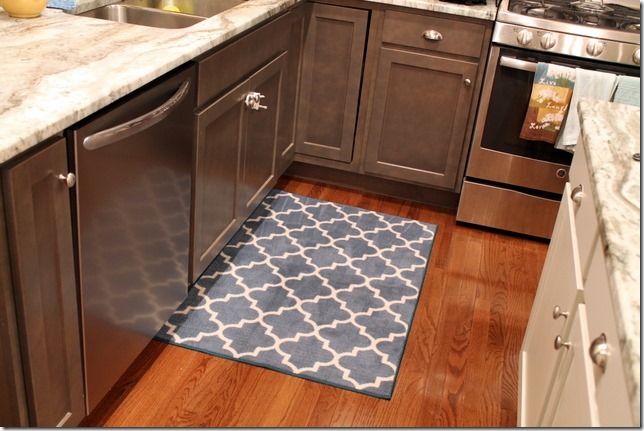 4:40pm – Since Lucas was such a big help, we head down to the basement so Lucas can jump on his trampoline. We recently added some blown up balloons to the inside of the trampoline, and it’s basically the best thing since sliced bread for this kid. He LOVES it! 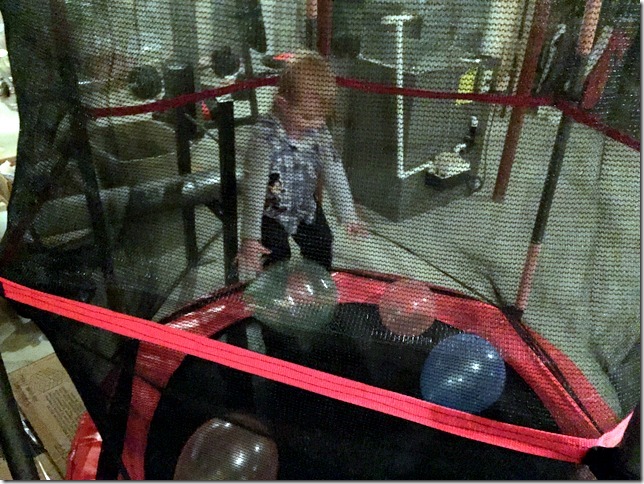 5:15pm – Jay arrives home from work and he and Lucas do their thing of running around the house chasing after each other and hiding. It’s honestly one of my favorite things to watch and I love how they’re starting to interact more and more (Lucas has always been SUCH a mama’s boy).

5:30pm – Jay and I catch up a bit and I go to get dinner heated up. Turns out Jay and I had some miscommunication (I thought he was going to take a frozen meal out from the freezer on Sunday but he says I never asked…debatable

) so we all wind up doing our own thing.

5:40pm – I first put together some dinner for Lucas and am thrilled to see him eat a couple pieces of grilled chicken (he never touches the stuff), rice, AND peas and carrots. Way to go, bud!

6:00pm – Time to get dinner ready for us. I’m having one of those “nothing sounds good right now” moments and eventually decide on breakfast for dinner. I mean, that’s never a bad choice, right? 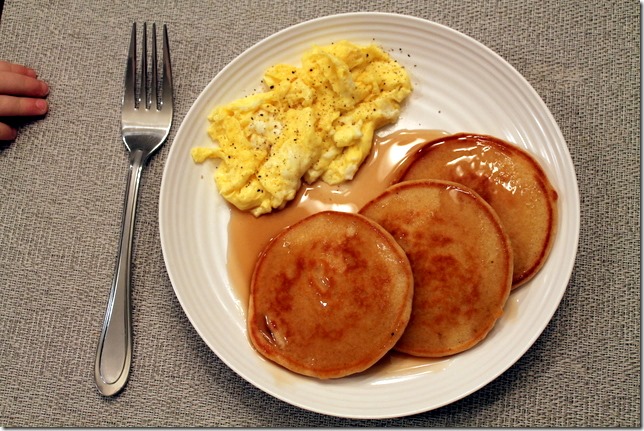 Power Cakes from Kodiak Cakes + a scrambled egg. I probably could have gone back for seconds of both, partially because Lucas wound up seeing them and suddenly wanted ALL the pancakes and stole a bunch of mine. But I was too lazy to cook more so I figured I’d just eat something else later.

6:20pm – Play time with Lucas! Jay and I have fun running around, playing hide and seek and dancing around with our crazy one. No photos because phones were put away.

7:30pm – Tubby time! We’re a little later than usual, but we were having so much fun that we let bath time go a little late. We practice all of his letters and numbers in the tubby and he’s got them down pat! 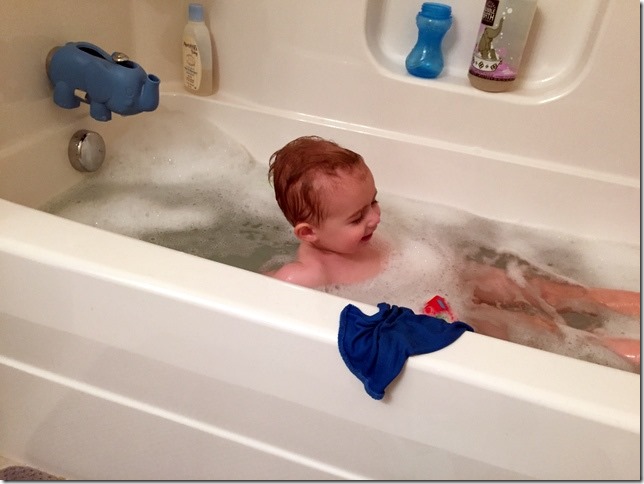 7:50pm – Time to brush teeth, put on PJ’s and get Lucas ready for bed. We’re trying to switch up who puts Lucas to bed more often lately, just in preparations for the baby, so since I took care of tubby duty, Jay handles bed time. 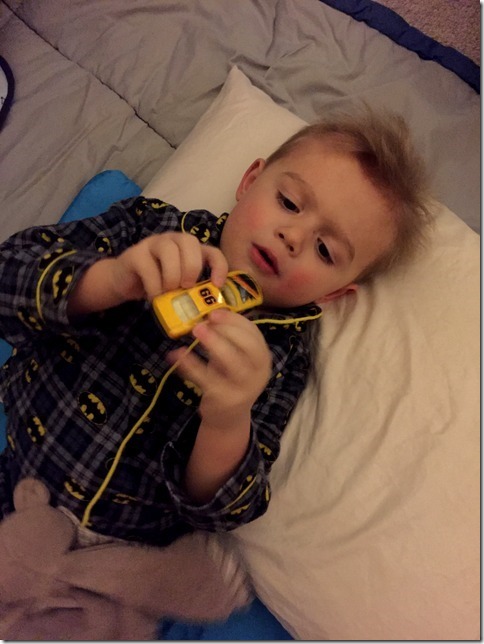 8:00pm – While Jay handles putting Lucas to bed, I go downstairs, take a few pics for some upcoming blog posts, then start finishing up my Tuesday post (which, by the way, THANK YOU to everyone who chimed in. It was so nice to hear that so many of you feel or felt the same way!).

8:30pm – Shut down the computer and join Jay on the couch. We both decide we’re in the mood for some ice cream, so I scoop out a bowl for each of us (my favorite cookie dough from Stewart’s!) and we eat that while watching a DVR’d episode of…something. Now I can’t remember. Whoops.

9:45pm – Check in the kitchen to make sure breakfasts and lunches are prepared for the next day. Put together a couple of quick things for Lucas then head upstairs.

FYI: This is not meant to be a WIAW post. I hardly ever track all of my eats these days because I snack on bites of this or that just about all day long!

Question for today: What’s the busiest part of your day? Morning? Evening? ALL of it, haha?